By all accounts, the introduction of SQL Server Data Tools (SSDT) in SQL Server 2012 was a watershed moment for many SQL Server developers. For better or for worse, SSDT as an IDE for business intelligence development changed – amongst other things – the way we deployed our SSIS packages (i.e. package vs project deployments), simplified Tabular Model development, and also introduced us to the SSISDB. Likewise the replacement of Business Intelligence Development Studio (BIDS) with SSDT had its detractors who were noticeably not very happy that in addition to installing SQL Server 2012 you still had to do a separate download and installation of BI templates for SSDT (previously, BI templates in BIDS were available as soon as you installed SQL Server 2005/2008). Although SSDT-BI is still being offered as a separate installation, subsequent releases of SSDT have included several enhancements changes that should go a long way to winning the hearts of its critics. In this article we conduct a comparative analysis of all versions (up until 16.5) of SSDT and identify all the major improvements that have been introduced in the BI templates.

The focus of the initial release of SSDT was designed to replace BIDS as well as VSDB, as shown in Table 1.

As shown in Figure 1, the initial release of SSDT ran off a Visual Studio 2010 Shell and there were no major changes to the templates that were last released as part of BIDS 2008 except for the inclusion of Analysis Services Tabular Project template.

Although the initial release of SSDT contained almost similar templates to BIDS 2008, it did however provide several enhancements to those templates. For instance, for the first time ever we were introduced to the SSIS Toolbox window, and the SSIS (Integration Services) templates were enhanced to: 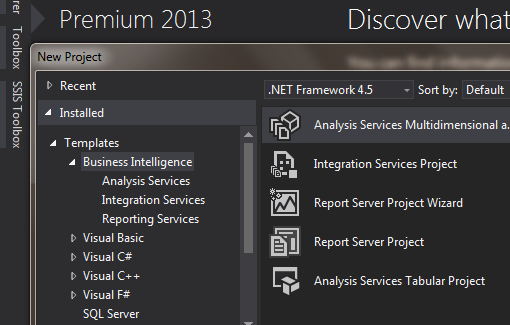 A noticeable improvement in the Analysis Services Tabular Project template was the inclusion of the Tabular Model Explorer, shown in Figure 4. Although, compared to multidimensional cubes, SSAS Tabular Models were easier to design and work with, configuration of the model.bim file was such that you had to navigate to different areas of Visual Studio to, i.e. identify total number of measures in the model, identify a list of existing configured data sources, etc. Fortunately, Tabular Model Explorer, reduces some of that navigation exercise by providing a collapsible tree structure of model.bim properties such as data sources, KPIs, list of tables, roles and measures. 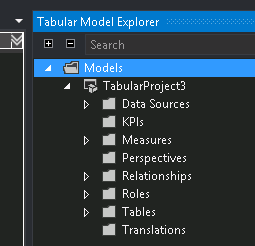 Similarly to other Visual Studio windows such as Solution Explorer, Tabular Model Explorer has the following built-in functionality:

Finally, you can only use Tabular Model Explorer against SQL Server 2016 Tabular Models or higher. That, means if you change your solution compatibility level to a level lower than 1200 as shown in Figure 5, you will run into an error returned in Figure 6.

The easiest way to access the parameters grid is to right click on the report body region, select the View option, and then click on Parameters.

In spite of the benefits, one limitation of project deployment in SSIS was that the Deploy option was only available at the project level. That meant even if you made changes to a single package in a project, you still had to redeploy the entire project. Luckily, SQL Server 2016 supports deployment of a single package and SSDT 2015 provides support for single package deployment through the Deploy Package option shown in Figure 8.

The Integration Services Project template in SSDT 2015 further includes components that can be used to configure tasks relating to Hadoop. The 3 Hadoop-related tasks are shown in Figure 9.

One of the improvements in SSDT 2015 was its support for Azure ETL development. As a result, Microsoft released a separate installation file, Azure Feature Pack for Integration Services (SSIS) that makes it possible for SSIS to connect, process and transfer data between Azure and on-premises data sources. A list of available Azure ETL tasks are shown in Figure 10.

We conclude the review of SSDT 2015 by mentioning another exciting feature introduced in the Integrations Services Project template, the Package Parts. Package Parts allows developers to setup package template that can be executed within a control flow area.