As in often the case in life, things that sound simple are not always the easiest things to do. In computer science this is even more often the case. In fact, one of the most challenging things about information technology work is often the communication with bosses that know little about technology and require justification for time spent on seemingly simple tasks. However, by the same token, tasks that seem impossible to the untrained eye are often fairly straightforward and quick to implement and can earn you easy respect.

Adding a column to an existing fact table seems like a fairly simple task. It is also often a legitimate business requirement. For example, if an organization wants to investigate the utility of installing new and more expensive credit card facilities, decision makers would probably need to be able to analyze payment types on their sales fact. To do so, provided the information exists in the OnLine Transaction Processing (OLTP / Production) database one would simply need to add a “payment type” dimension and a “PaymentTypeKey” column to the fact table (in a traditional star schema model).

This schema change is fairly simple but if, as is that case in many systems, your data warehouse and OLTP database are not on the same server/instance or your solution needs to be deployable you will not be able to update the table and fill the new column with data directly from your OLTP source in one T-SQL statement. Likewise, due to the differential nature of ETL updates even once you have added a new look up and fed the new column only the newest rows will have this column filled.

It is also very often unacceptable to entirely truncate a fact table and ETL log (causing it to rerun entirely) because fact tables can be huge and this would clog up the server.

The following method provides a solution that can be tacked on to an existing fact ETL flow. To learn how to create a basic fact ETL flow you can check out an earlier article on the matter here.

Assuming you have already set up views on your OLTP database which reflect the tables in your data warehouse the basic steps are as follows:

The first three points are out of scope for this article but the 4th is covered in detail below.

It is worth noting that these steps can be used in any conditional split setup and can come in handy in many situations, it is basically the equivalent logic of an IF statement but in ETL format.

The following figure shows the new module tacked on to the old existing fact table ETL: 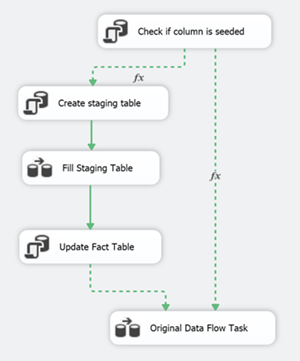 What it does is:

Steps 2 to 4 are never run if the column is already fed.

To set up this type of solution follow the steps below:

This solution provides a way of safely updating a new column that has been added to an existing fact table. The conditional check allows the flow of the package to update column where there is existing data or just move to the old data flow task if the data has already been populated. With that in mind, the new branch of data flow will logically only run once. Once you have successfully run the ETL you can delete or disable the steps and just run the “Original Data Flow Task” as you did before.