The discussion pertaining to SQL Server 2012 columnstore indexing is better explained through theoretical and practical measures. Thus, for the practical measure part – I will be using the AdventureWorksDW2012 sample database. The rest of the prerequisites for a comprehensive understanding of this topic are as follows:

Columnstore index is an enterprise feature that is intended to improve the query response on T-SQL queries against OLAP systems. This feature was introduced in SQL Server 2012 as an alternative to the traditional row-based indexing that has been dominant in SQL Server versions prior to SQL Server 2012. It must be noted however that the notion of indexing against columns of a given object is not novel to Microsoft instead has been largely pioneered by SAP’s Sybase IQ database technology.

Getting started with Columnstore Index in SQL Server 2012 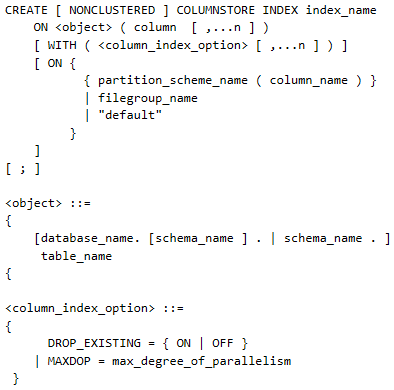 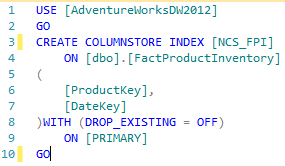 In addition to getting started with the syntax of creating columnstore index, you will notice that there is now a new icon in SQL Server 2012 object explorer that indicates the presence of a columnstore index in a given object as shown in Figure 5. 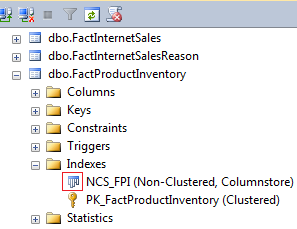 Tutorial: Row based index vs Columnstore Index in SQL Server 2012

In this section we take a closer look at some of the benefits that can be incurred by using a columnstore index in a data warehouse environment. We will be using the AdventureWorksDW2012.dbo.FactProductInventory table to test the regular index part of this tutorial. I have chosen this table as it has largest record count (at 776286) of all the objects that ships with the AdventureWorksDW2012 sample database.

Figure 6 shows the entity relationship diagram of the dbo.FactProductInventory table. The clustered index and primary key uses a combination of ProductKey and DateKey fields. 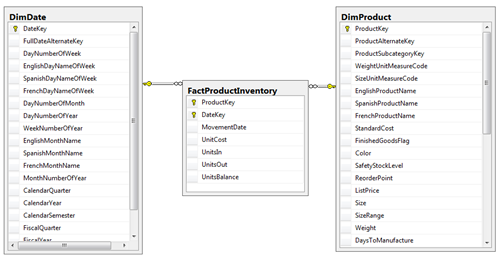 For testing the columnstore index part, I have done the following:

“As a user, I would like to see a report that show the totals of Unit Costs, Units In, Units Out, and Units Balance per Product” 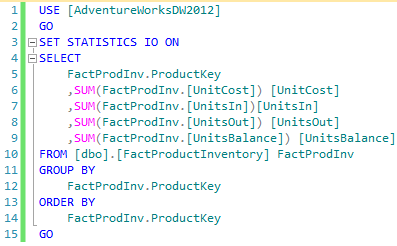 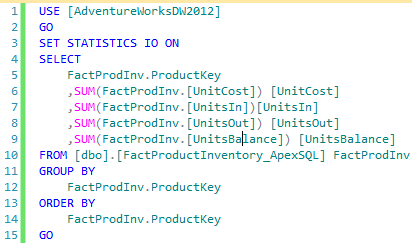 Figure 10 and Figure 11 show IO Statistics for the respective execution of T-SQL queries shown in Figure 8 and Figure 9. Just by comparing the statistics in terms of logical reads and object scan count, it can be seen that there are significant performance benefits for the table that uses a columnstore index.