In the previously published articles in this series, we talked about the Business Intelligence Markup Language (BIML) and how to use the technology to build and manage SQL Server Integration Services (SSIS) packages. Besides managing SSIS packages, we can also manage SSAS models and build databases using BIML.

In this article, we will explain how to build databases using BIML. We will be covering handling databases objects such as schemas, tables, columns, indexes, and other objects.

To build databases using BIML, developers have to define database objects using this language, then use BimlScript (VB or C#) to generate the CREATE SQL statement for each object to be used within an SSIS Execute SQL Task.

Before starting our tutorial, we should make sure that we already have all prerequisites installed on our machine. Our previously published article Getting started with BIML should be a great reference.

The first step in this tutorial is to create an Integration Services project using Visual Studio. Then we should add a new Biml Script file to our solution. 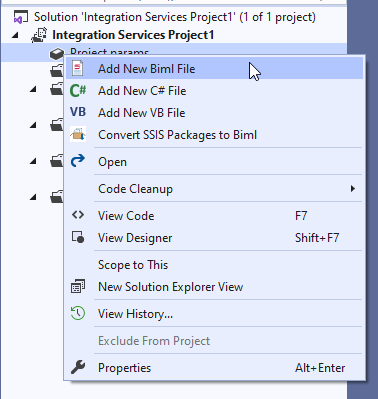 After adding the Biml script, we should define a connection to the SQL Server instance. To do that, we will use an OLE DB connection. We should add the following code within the Biml script:

Note that these elements must be defined if you are looking to build databases, or even you are connecting to an existing database. Besides, you can also configure file groups, files, partition schemas, and functions, as mentioned in the official documentation.

The third object type supported in BIML and needed while building databases is the table. Similar to other object types, tables must be defined within the “Tables” element. Each table is defined using a “Table” tag where the table name and the schema name are defined as attributes. Note that the schema name must be fully qualified (<database name>.<schema name>):

If you need to create tables on the default schema, you can use the following code:

The next step after adding a table element is to define columns. Columns are defined within the element “Columns” under the “Tables” element. Each column is defined using a “column” tag.

For each column, several properties (attributes) can be defined, such as the name, data type, is nullable, identity, length, precision, scale, computed column expression, and others.

In order to define an identity column, the column data type must be numeric, and we should specify the identity seed and incremental values as follows:

A column with a default value

Default values are added to new records when no value is specified for a specific column. We can use the “Default” attribute to set a default value as follows:

To prevent inserting null values into a column, you can add a “not null” constraint by using the “IsNullable” attribute as follows:

There are two types of strings that can be defined using Biml:

To add a long string column, we should set the length attribute to -1 as follows:

If length is set to another number, then it is considered as a short string. As an example:

A computed column is a column that is not physically stored in the table. It can be used to calculate a value based on another existing column. As an example:

Foreign keys are added under the “Columns” element using the “TableRefernce” tag. We should specify the fully qualified reference table name and the primary column name as follows:

Note that you can specify if the foreign key constraint should be created or checked using the “ForeignKeyConstraintMode” attribute.

If the primary-foreign relation is created over multiple columns, we should use the “MultipleColumnTableReference” element to define the relation. Each column must have a separate element, but all columns used within a relation must have the same group name as follows:

To create a unique key constraint, we must use the “UniqueKey” element similar to adding primary keys:

The last object we will be covering is the index. Indexes are defined within the “Indexes” element under the “Table” element. The index columns must be specified as follows:

If we are looking to create a clustered index, we should add the “Clustered” attribute in the “Index” element as follows:

Other available index configurations can be found in the official documentation.

After explaining how to define the objects that we may need to build databases, we should deploy them. BimlScript gives the ability to generate the DDL statement to create these objects.

If you are not familiar with BimlScript, you can refer to our previously published articles in this series:

As an example, you can use the following code within the Biml root node below the database objects definitions: 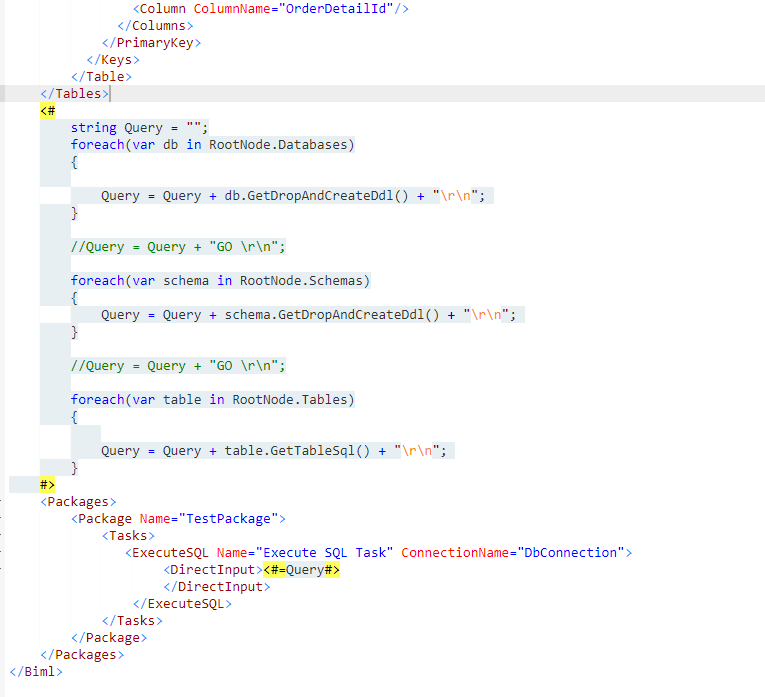 This will create a package with a single Execute SQL Task where the command is an SQL statement that creates the databases, schemas, and tables.

Before generating the SSIS package, make sure to check if your Biml code contains errors using the “Check Biml for errors” option. 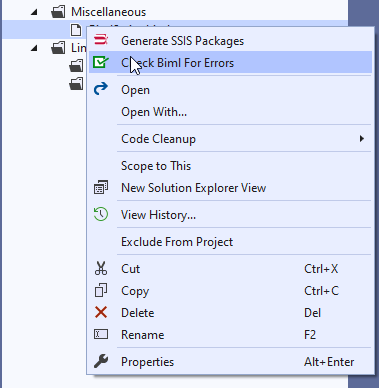 If no error is found, you should click on “generate SSIS packages” to build your package. 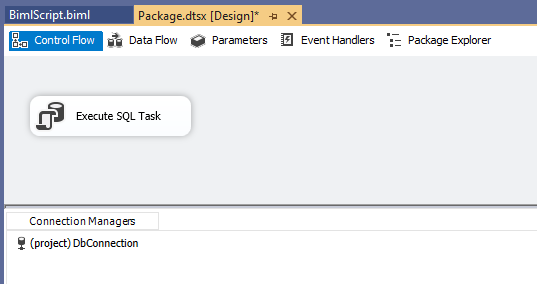 You can check a working example at the BI developer extensions website.

If you are using BimlStudio, you don’t have to use C# extended scripts to generate SQL statements to execute them using SSIS Execute SQL Task. Add a Biml script and build your solution. SQL DDL statement file will be generated.

Let’s try to add the following Biml script into a BimlStudio project (from the Project View tab):

Then we have to switch this script to live mode, as shown below. 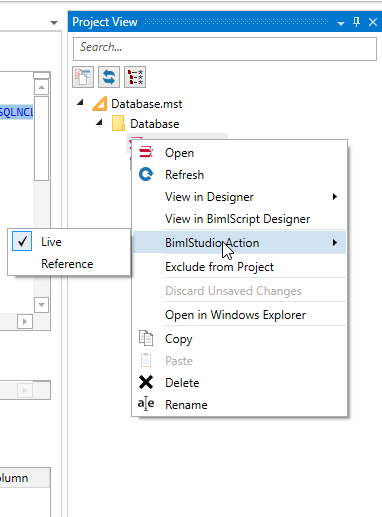 If we check the project’s logical view, we can see that BimlStudio recognizes the defined objects. 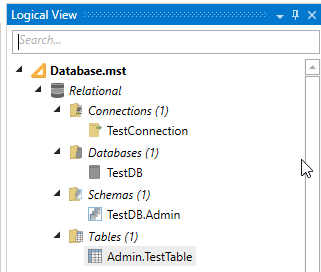 If we open the “Admin.TestTable” using the BimlStudio designer, we can see that all columns, Indexes, Keys are defined. 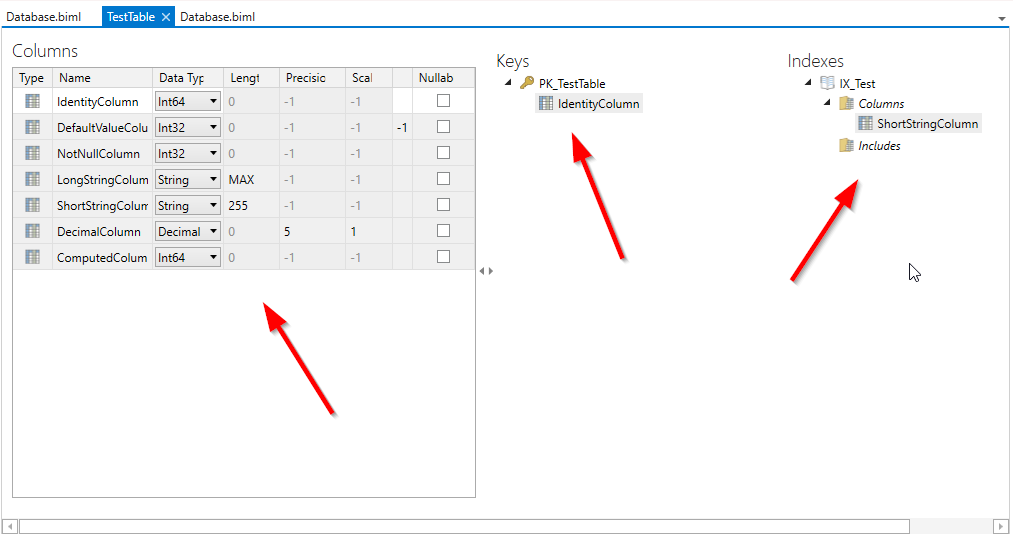 If we build the project, two SQL DDL statement files are generated into the output directory

The following are the SQL code generated in both files:

There are more object types that can be created using BIML, which are not mentioned in this article. You can refer to one of those links for more details:

In this article, we talked about building databases using Biml. We covered many object types such as database, schemas, tables, indexes. Since Biml can only be used within business intelligence projects, we used an SSIS package to execute the generated DDL statement using an Execute SQL Task. Also, we mentioned how to generate the SQL Statements using BimlStudio. In the end, we provided some external links that contain more detailed information about this process and more object type definitions.

In the next articles in this series, we will be talking about building and managing SQL Server Analysis Services (SSAS) tabular and multidimensional models.