In the previously published article, Biml alternatives: Building SSIS packages programmatically using ManagedDTS, we talked about building SSIS packages using the managed object model of the SSIS engine (ManagedDTS). In this article, we will illustrate another Biml alternative, which is the EzApi class library, and we will make a comparison between both technologies.

What is the EzAPI class library?

As we talked previously, Microsoft provides a set of assemblies that allows users to programmatically create, manage and execute SSIS packages. The main weakness of using these assemblies is that they are very complex and hard to understand. For this reason, the Microsoft SSIS team developed a .Net Class library called EzApi that facilitates automating SSIS package development. This class library is developed using C# and it was used internally by the team for a while. Later it was published on CodePlex within the Integration Services community samples project and later, it was migrated to Git-Hub after the Code Plex website is closed, but this project is not improved for a while.

After SQL Server 2016 was released, Pedros Morais (a Full Stack developer) announced EzApi2016, a fork of the original project to adapt this library to the new SQL Server version. And later, this library is available on NuGet and it is improved periodically. More information about the improvement can be found on the Pedro Morais website.

This class library can be considered as an intermediate layer between the application and the SSIS managed object model. Each object in this library is mapped to the related COM object in SSIS. You can check the runtime and data flow engines class hierarchy in the following images (Reference: EzAPI – Alternative package creation API) 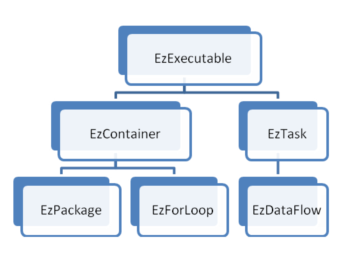 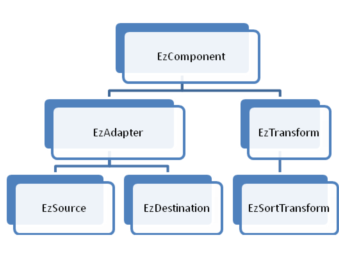 As shown in the runtime engine class hierarchy, the base entity is executable, which can be a container or a task. And in the data flow engine, the base entity is a component that can be an adapter (source or destination – since they adapt SSIS to an external source) or a transformation. 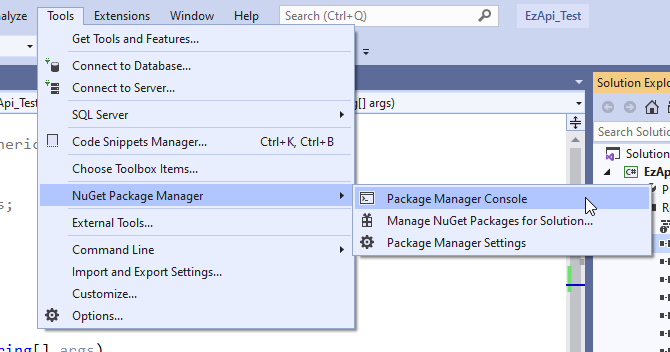 Then you should use the following command (0.8.93 is the latest version right now): 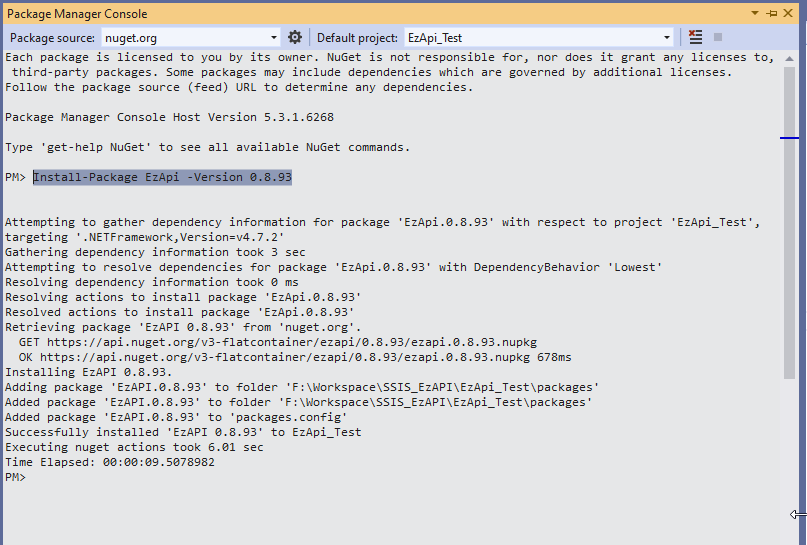 Now, the class library is added as project reference: 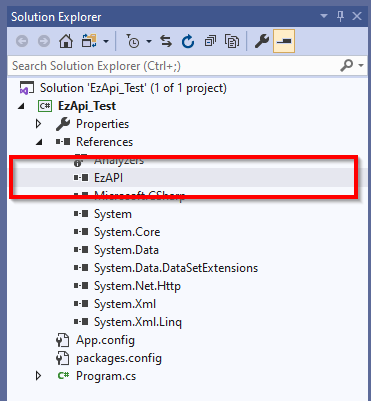 If you are working offline, you can simply download and build the project locally, then add the generated class library as a reference within your project.

Before getting started, you should note that you may need to add a reference for the SSIS managed object model assemblies to the project since it is required by some of the methods in the class library.

First of all, you should import the Microsoft.SqlServer.SSIS.EzAPI namespace within the current class:

To create a new package and save it within a local path you can use the following code:

To load a package from an existing dtsx file, you can use the following code:

To add a task within a container (package or container), you should use the task-related class and specify the parent container on the class initialization. For example:

Using Ezapi, adding tasks is more easier than SSIS managed object model. The following code is used to create a package, adding an OLE DB connection manager, adding a data flow task with an OLE DB Source and destination in order to transfer data between [Person].[Person] and [Person].[Person_temp] tables:

To execute a package, you can simply use the Execute() method as follows:

There are some template packages added within this class library. As example:

These templates decrease the time and lines of codes needed to develop packages.

EzApi is not very popular, but there is some article online that you can refer to in order to learn more:

After creating the package, we will convert it to a Biml script, as we explained in Converting SSIS packages to Biml scripts article

As you can see, the Biml script is a bit simple than the C# code we wrote previously. We can say that both technologies used facilitate the SSIS package automation much more than using the traditional assemblies provided by Microsoft. And it depends on the user programming background since developers will found themselves more familiar with EzAPI, while other employees or analysts will go Biml.

As we mentioned in the previous article, if you need to automate package creation and management within an application, then you cannot go with Biml. In other cases, you are free to choose between both technologies.

EzAPI has the same limitation than ManagedDTS since it doesn’t show a clear error message if encountered while building the package:

Even if the Biml doesn’t have plenty of resources online, but they are much more than the one related to EzAPI since you may not find more articles than the ones we mentioned previously (even those articles take a lot of time to be recognized).

In this article, we have illustrated another alternative of Biml called EzAPI, we talked briefly about this library and why it was developed, then we explained how to use it to create and manage SSIS packages. Finally, we made a comparison between both technologies.