Suppose you write a technical blog in the English language for your website. You have good followers in a country where the primary language is not English. You want to translate the document content in their native language for a wider reach.

SQLShack is a widespread knowledge-sharing platform for database professionals for SQL Server, AWS, Azure, MySQL. If you browse to SQLShack.com, you get all content in the English language on this site. However, it also translates a few documents into the Spanish language. You can browse to URL for all Spanish language documents.

Similarly, if you require to translate documents into multiple languages, it isn’t easy to translate manually. You require specific language experts for translation. Sometimes, I receive emails from a client written in their native languages. They also send documents, attachments specific to their language. Usually, I use Google translator for text translation.

However, it is a manual process. Therefore, I tried looking for an automated way of translating documents into multiple languages. This article explores how to achieve text translation into different languages using the Azure Logic Apps.

Therefore, In this article, I would assume that you have a basic understanding of Azure resources and familiar with the Azure portal.

A quick overview of the Azure Cognitive Services

In this article, we use Language APIS that supports a service called Translator. It is a cloud-based machine translation service that can translate your text into multiple languages( more than 70 languages) in near real-time. It also supports language detection, text transaction and transliteration. 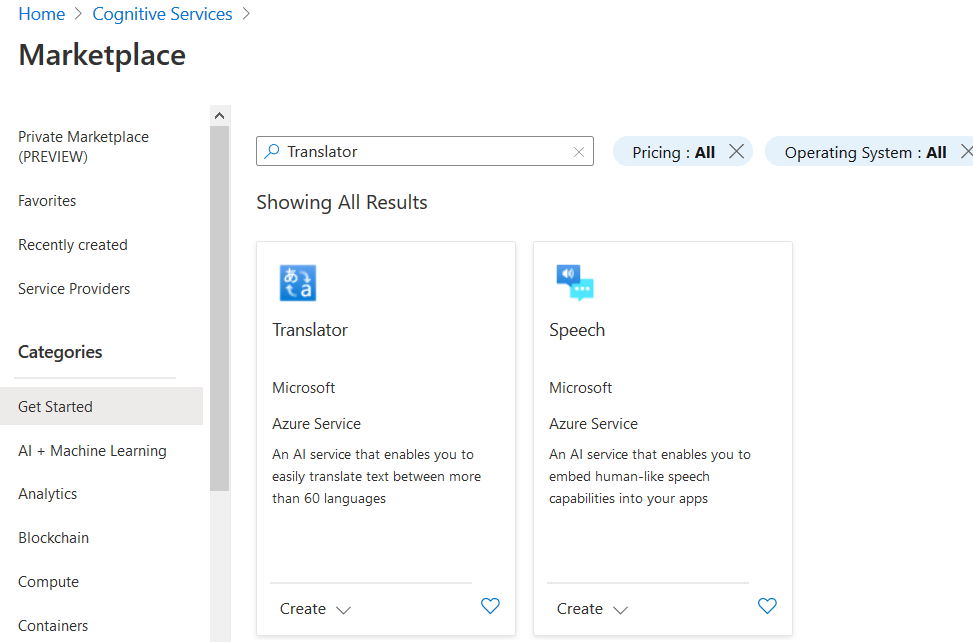 Click on Create in the Translator and enter the following details:

You can refer to Cognitive Services pricing—Translator for details regarding available pricing options suitable for your requirements.

Once the cognitive service resources are deployed, click on Key and Endpoint. Here, note down the access keys. These keys are required in the Azure logic apps connector.

In this article, we implement an azure logic app for the following scenario.

Create a blank template logic app in the Azure portal. The logic app requires a trigger for workflow execution. Here, search for Outlook.com connector and select When a new email arrives (V2).

If you have not authenticated your outlook profile using a Logic app, it asks for your credentials and permissions. In the new email arrival form, enter the following. 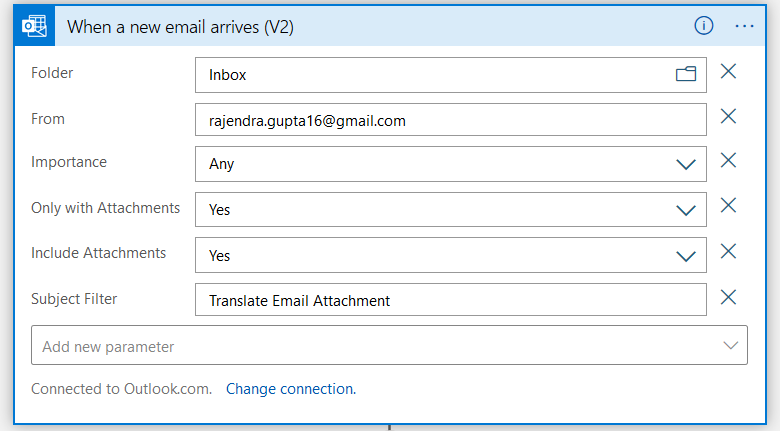 In the Microsoft Translator actions, choose the Translate text (preview).

It requires the following inputs.

Once the connection to cognitive service is successful, it ass you to specify the target language and text.

It automatically places a for each loop as shown below. 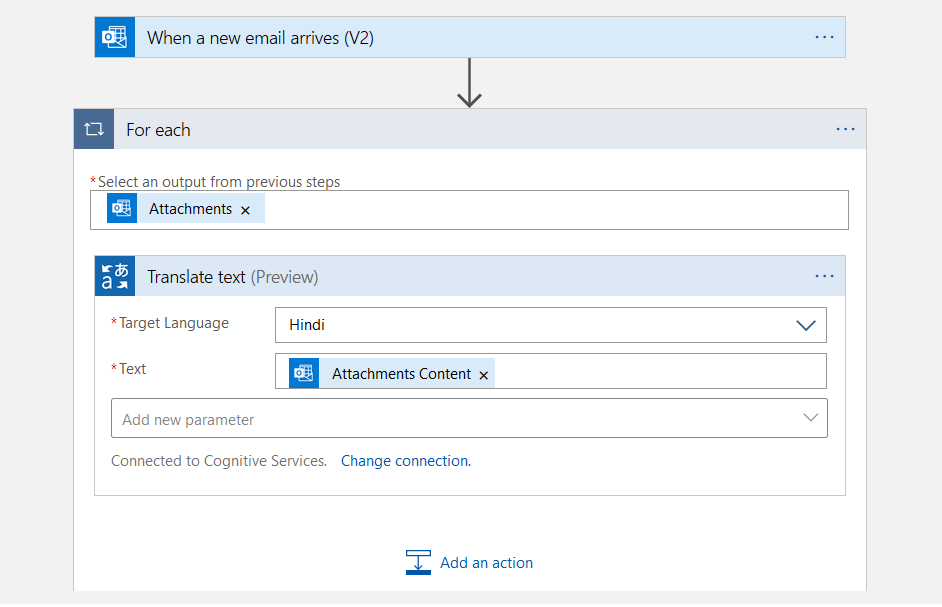 Click on Add an action and select Outlook.com connector with send an email (V2). In this send an email, enter the body, subject and recipient email address.

Click on Add new parameter and select Attachments. In the attachment, do the following configuration

Click on the connector between the new email and for each block. It gives you an option to add an action or add a parallel branch.

Similarly, add another parallel task for the French language as well.

At a high-level, once we execute the logic app and it detects an email with a specified subject and an email with an attachment, it triggers the workflow of the language transaction for Hindi, Spanish and French parallelly.

Save the Logic app and click on Run. Now, send an email with the “Translate Email Attachment” subject and attach the sample text in an attachment.

Send an email with a specified subject and text in the attachment. 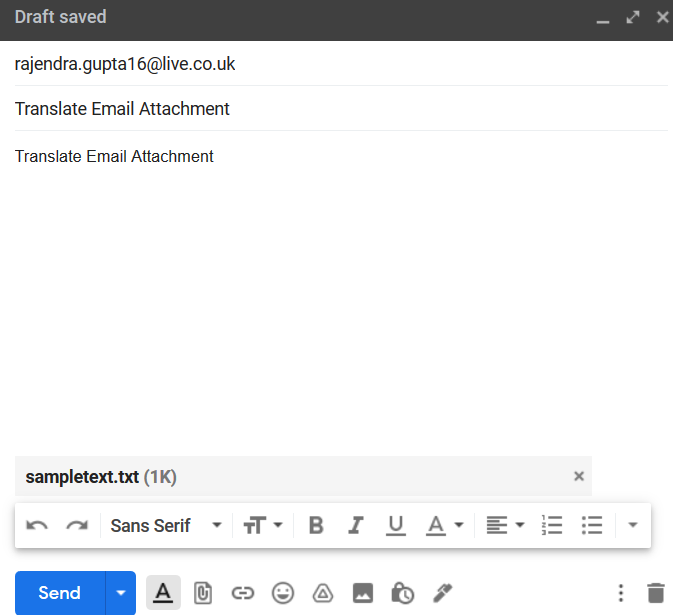 As shown below, all the workflows steps are completed successfully.

It triggers an individual email for Hindi, French and Spanish language.

Let’s view the original text and translated texts into the respective language.

Open the email for Hindi language content. It has an attachment named Hindi.txt.

Open the attachment and view the translated content from English to the Hindi language.

Similarly, we open the email for Spanish text attachment and view its content.

You can view the translated text from English to French language using the Azure Cognitive service with Azure Logic Apps in the below screenshots. We get the content configured in the email body to send an email(V2) action item.

This article explored another azure automation feature using Azure logic apps for translating the document into a different language in near real-time. It supports around 70 languages for conversion. You can configure the logic app and Microsoft Translator for converting text into your required language automatically.