One positive thing to come out of my recent project that involved rewriting one of the Data Marts from our Data Warehouse environment was a confirmation of my suspicions with regards to the behavior of SQL Server Integration Services’ (SSIS) ForEach Loop Container. You see, I have long suspected that the ForEach File Enumerator type in SSIS’s ForEach Loop Container does not process time stamped text files in an order that could be deemed correct to the human eye. For instance, Figure 1 shows a list of text files containing data relating to Marital Statuses of FIFA 2016 Ballon D’Or nominees.

The data contained in the files created in the morning of June 30th (suffixed with “AM”) is similar – with Lionel Messi’s marital status set to Single as shown in Figure 2.

Later on, that day, Lionel Messi got married and as a result the “2PM” file contains changes to Leonel Messi’s marital status as shown in Figure 3.

It is interesting to note that the default sort order of these text files in Windows Explorer is by file name – which looks to be incorrect as the file suffixed with “2PM” is listed ahead of the “7AM” file. This means that if we were to load data from these files into a Type 2 Marital Status dimension, the latest version of the data would come from the “7AM” file.

The correct order of processing these text files is to have them sorted by date modified as shown in Figure 4 wherein the “2PM” file will be the last one to be imported.

The screenshot in Figures 1 and 4, indicates that listing of the file name can appear differently depending on whether you are sorting by file name or date modified. Whilst Windows Explorer shows that the listing of files can be sorted in multiple ways, it looks like the ForEach File Enumerator type only processes text files in an order sorted by file name which – as we had indicated in Figure 1 – is incorrect. To demonstrate this, we make use of a sample SSIS package shown in Figure 5. The package begins by using an Execute SQL Task to clear the staging table. The next step involves using a Data Flow Task inside a ForEach loop container that iteratively loads the text files.

As shown in Figure 6, ForEach Loop Container is configured to use ForEach File Enumerator type and it processes files with file name like MaritalStatus_FIFA*. 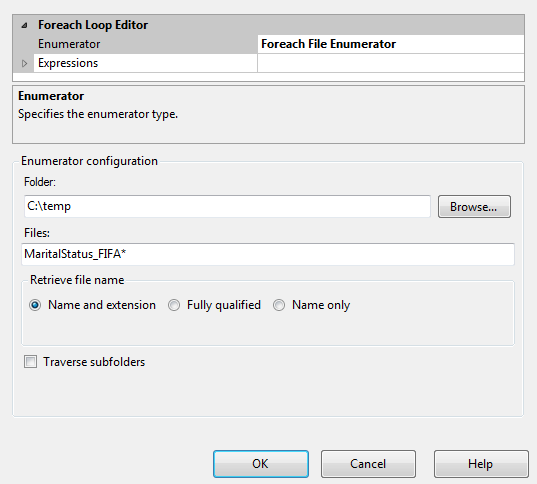 Following the successful execution of the SSIS package shown in Figure 5, we are able to view all data that was imported into the staging table as shown in Figure 7. As already predicted, the ForEach loop container using ForEach File Enumerator type processed the files in a file name order. This is incorrect as the latest record for Lionel Messi (at line 5 in Figure 7) is loaded ahead of the 7AM file.

The dangers of relying on the ForEach File Enumerator type is that we don’t have control in the way files are processed. We can get around this limitation in two ways: