Context In previous article entitled “How to report on SQL Server deadlock occurrences“, we’ve seen how to extract deadlock information from either system_health or specialized Extended Event and store this information into a table in a SQL Server database. We also discussed a simple report which leads to the creation of a deadlock occurrences timeline. Now, it’s time to go deeper in the processing of this deadlock information… As we collect this information in XML format, we can query the XML contents directly in SQL Server using the XQuery feature of Transact-SQL. This means that we can do so much more than just store this XML. This would allow us the ability to generate reports based on deadlock properties like the application name, queries implied in deadlocks… These reports would be especially useful when we don’t always have the code of the application that generates these deadlocks and we must provide suitable information to the author to inform (and sometimes try to convince) them that it can be the root cause of performance problems then help him in solving these problems. This article will define a process that will collect these XML descriptors into a base table and split them into a series of columns. These columns will then be available to generate reports as we discussed just above.

Now, let’s focus on a process for collecting and transforming XML version of deadlock graphs into something we can use for reporting, in short, something on which it’s easier to compute statistics. This process could be built in one piece of code: we could do all the job inside a single stored procedure, like we did to extract deadlock occurrence time from SQL Server Error Log in the previous article, but the complexity of such a procedure would be very high. So, we will divide the process into 3 steps as shown in following figure. Another advantage of this design is that we could change the extract method (we could use an extraction from SQL Server Error Log), remaining steps would be kept intact.

Each step of this process can be run asynchronously and uses the results of its predecessor to generate its output. We could extract XML graphs every hour and transform only once a day while reporting can be performed at any time by authorized users. The first step of this process, “Extract”, has been discussed in the previous article entitled How to report on SQL Server deadlock occurrences. Therefore, we won’t discuss a lot about it in following sub-sections and instead focus on deadlock XML processing. As soon as we designed the “Transform/Shred” operation, we will talk about how to automate both “Extract” and “Transform/Shred” steps using a single SQL Server Agent job. Deadlock XML example and review Now that we have extracted deadlocks from Extended Events and assigned a unique identifier to each record, we can take the product of this extraction and split up its XML contents. But, let’s first review what a deadlock XML graph looks like. Here is an example.

As we can notice, it’s divided into three XML sections: 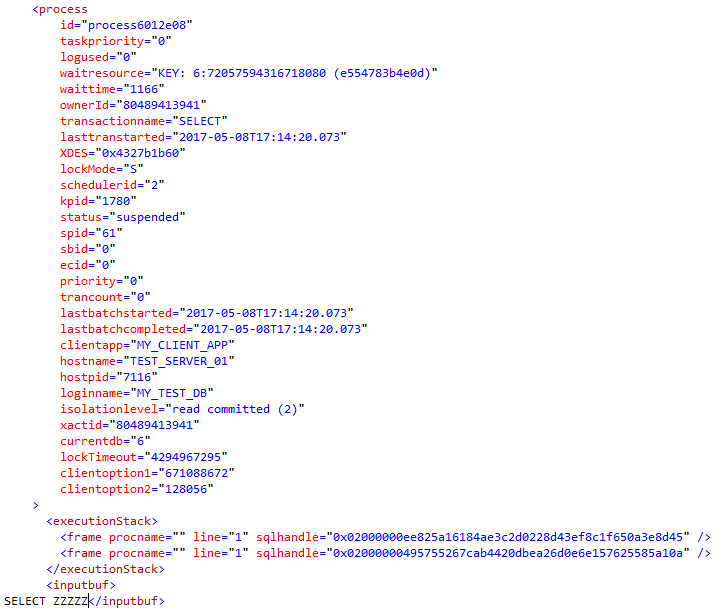 Designing Deadlock XML transformation process output table So, there are plenty of properties that we could extract from the XML graph. But we need to keep only those which would be useful for reporting purposes! Let’s start to think about the design of destination table… There are actually some facts that we need to consider. First, let’s recall that there are at least two processes implied in deadlocks. This means we will take the same kind of information for any of them. Furthermore, if we keep one row per deadlock and 10 process properties, we would get a table with at least 21 columns (deadlock identifier and twice the ten properties). Hence, this would not be easy to read and average size of a row could be very high. Instead, we will base our table by process for a single deadlock identifier. But we could have noticed that, for a single process, there can be multiple frame elements in the executionStack element and if we want to store extended information about queries (based on the value of sql_handle property), then we should shred the XML graph to that level of details. Here is the list of process properties that I consider important and, so, that should be kept. Let’s do the same for statement properties (based on sql_handle). Note

I grouped these properties in logical buckets, not in their order of appearance inside the example deadlock graph XML descriptor. When we get values for sql_handle and as corresponding queries may disappear from plan cache because of DBCC FREEPROCCACHE usage, instance restart or whatever, we should also collect these queries during our “Transform/Shred” process. Based on these needs, we will define a table with following columns definition:

Designing transformation procedure Let’s first give this procedure a name so that we can refer to it in this section and following. We will call it Reporting.ShredDeadlockHistoryTbl. Its creation script is attached to this article. Then, this procedure needs parameters. It shall behave as dynamic as possible. This is why it will take fully qualified names for source and destination tables so as the name of the column that identifies a record in source table and the name of the column that corresponds to the actual XML representation of a deadlock graph. Putting things together, this provides us following procedure signature:

This procedure needs a body. So, let’s look at that next. It should do some pretty common checks then take each deadlock into consideration, one at a time and perform some processing on it. You will find below the high-level algorithm that will be used:

Most operations around the loop are pretty trivial. Getting back T-SQL text for a particular value of sql_handle is also pretty straight-forward using sys.dm_exec_sql_text built-in function. The same goes for the previous operation that consists in the update of records with object names corresponding to a particular ObjectId (associatedObjectId attribute of keylock element in resource-list section) once we know that the identifier we got back relates to records in sys.partitions table. So, the critical (and most difficult) part of this algorithm resides in following step: “Shred Deadlock XML graph and insert into temporary destination table“. We will review fundamentals that lead to its working implementation. Note

A part of this step, that we can’t neglect, makes use of set-based programming approached that is discussed in another series on SQLShack. In following, we will assume you know these principles.

Basically, this step consists in an INSERT statement and uses Common Tabular Expression or CTE extensively. So, this query will look like:

The first CTE will be called DeadlockDataSource and will read from source table deadlock identifier and corresponding XML column deducted as we can see in following code:

This CTE will be use to define another CTE called VictimIds that gets back details regarding deadlock victim identifiers. It will use nodes and value XQuery function.

DeadlockDataSource will also be used to get back information about locks that were held when deadlock occurred. There will be a CTE called Locks that takes the resource-list area of each deadlock. With this, we will get find out which process was holding a lock on which object, in which mode and which process asked for a lock of which type on the exact same object. Here is the code for this CTE:

To do so, we will build a CTE called Processes that looks at the process-list area in deadlock XML descriptor and generate a row by occurrence of process element. Here is the code for Processes CTE:

Now, we can distinguish which processes were victims and which processes were not. We also know which resources were implied and some information about process holding locks on these resources. Everything is in place to actually generate records that will be inserted into destination table of Reporting.ShredDeadlockHistoryTbl stored procedure. As we need to assign an increasing number to process list so that we can clearly qualify rows, we will take advantage of DENSE_RANK function that returns the rank of rows within the partition of a result set, without any gaps in the ranking. The rank of a row is one plus the number of distinct ranks that come before the row in question. We build a query using this function as follows:

Ranking will be done by DeadlockId and order by ProcessID so that it gives us:

The FROM clause of the SELECT statement, that generates the data to be inserted, is built on a LEFT JOIN of Processes and Locks CTEs.

I created an example table called dbo.ShreddedDL_Example. I will use data from that table to show you potential reports that we could generate so that we can pinpoint and prioritize actions to remove deadlocks. These reports could help developers in deciding where efforts should be made at first. Top Applications Let’s say your databases are used with multiple executables and these sets the ApplicationName property of its database connection descriptor. We will be able to tell which of them are most implied in deadlocks using following query:

Here is a sample results. As we can see, there is an application that is more implied in deadlock occurrences than others… 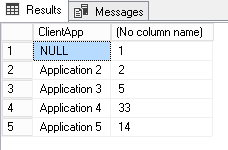 Top Databases If we have multiple databases on same server, we could look at which databases were implied in deadlocks using following query:

And here is a screen capture of corresponding results. We notice that there is one particular database implied here.

Top Objects We could also pinpoint which objects are most implied in deadlocks. This will pinpoint objects we might be willing to tune (indexing, redesign, access review inside code…) Here is a sample query that can be used for that followed by its results against the dbo.ShreddedDL_Example table:

Unfortunately, most queries were out of cache… Note

For security matters, I updated the content of dbo.ShreddedDL_Example table so that queries do not match the actual query used on server.

Going further Until now, we just used one single column to get statistics but we could also combine columns. For instance, we could add the ClientApp column to tell that most deadlocks occurred with this application accessing that object. This is performed with following query:

There we can see that most of deadlocks where Application4 is implied (there were 33 in previous example) occur when this application accesses Table1 and Table3. Notice that we could also filter results with a WHERE clause. Please don’t hesitate to comment out this article to share report elements you find most useful

Until now, in this series, we’ve defined a process that: The first part of this process could be adapted to read from another kind of source like the SQL Server Error Log when some trace flags are activated. Second part of this process should perform well as long as the input XML format corresponds to the one it has been designed for. Once this collect and transform process succeeded, we are able to generate statistical reports based on deadlock properties like the application name, queries implied in deadlocks… In following article, we will summarize everything we’ve seen so far and automate the first two steps of this process using a SQL Server Agent Job. Other articles in this series: