This article is the last one of a series in which we discussed how to collect data about deadlocks so that we can not only monitor them but also build reports based on our collection results.

If you came directly to this article, you will find below a list of previous articles with a little word about each of them. We recommend you to read them all before going any further.

Now, it’s time to automate the first two steps of the above process. This means that we need to make choices on different aspects:

These questions will find answers in following sections.

In order to properly choose our source, let’s first review what has to be done for each option.

You will find attached to this article a file called:

This file contains the code to create such a specialized Extended Event Session. It’s a modified version of the one provided in first article and is almost executable directly: all we have to do is to edit following lines to match our configuration and requirements:

As we can see, we can specify the output directory and the event session name. Filenames corresponding to that event session will bear the name of that session with a  .xel extension.

We can also provide a maximum file size for these files and the number of files for roll-over logging.

This script is version-aware and generates different statement based on the version you are currently running. The reason for this is that File Target definition is slightly different between SQL Server 2008 (R2) and SQL Server 2012+. For further details about these differences, refer to first article of this series.

You can run this script multiple times if you want. It will check for the existence of an Extended Event Session called by the value of @EventSessionName and will only launch creation statement if no session exists. This means that it won’t alter an existing Extended Events Session.

If we want to check for the existence of our Extended Events Session, we can use following T-SQL statement:

Here is a sample output:

As soon as we see a state like second line in previous example, we are able to get deadlock graphs from Collect-Deadlocks Event Session using a modified version of the script presented in section entitled Option 3: Extended Events and system_health session of first article. This version can be downloaded as a stored procedure call Monitoring.CollectDeadlockInformation in the archive containing All scripts used along this series. The link to this archive can be found at the end of this article.

Note that, as stated above, we can say that it collects live data because it reads corresponding session log files and displays the results but.

Here is the kind of the output you would get when executing the modified version of this query:

In the configurable values presented above, there is a variable called @EventsOutputPath. This variable tends to tell that the Extended Events Session we created writes its data to disk and it’s absolutely the case! Expressed in technical terms, we used a File Target Type for our Extended Events. If we consider system_health and we generate the script to recreate it, we will see that there is another Target Type called Ring Buffer. Let’s see the differences between both target types and make the appropriate choice.

According to Microsoft’s documentation page about Ring Buffer Target, this target type holds event data in memory while the event session is active. This means that when the Event Session is stopped, SQL Server frees allocated memory buffers and therefore we can’t access previously collected data anymore.

This also means that a restart of SQL Server instance would lead to a loss of collected data too.

We can conclude that we should choose File Target over Ring Buffer whenever data persistence is considered important.

In SQL Server 2008 and 2008R2, system_health only has ring_buffer target, so no persisting data could be retrieved.

The following query will give you a list of target types per event session.

If we run it against a SQL Server 2008 R2 instance, we will get following results:

Since we’ve seen how to create a complete Extended Event Session with a file target, it’s not a difficult task to edit the system_health session in SQL Server 2008 (R2) so that it also writes to an asynchronous file target.

Starting this version, both targets ring_buffer and file targets are defined.

We can run the previous query against a SQL Server 2012 instance and we will get:

So, data from system_health event now can persist after a server restart. Let’s first check its configuration with the following query.

We will notice that this target will roll over four files of 5 Mb each. This means that we only keep 20 Mb of data.

If we estimate this is not enough, we could edit the configuration for this target. This is done by dropping the event target and creating a new file target to the system_health extended event.

Don’t forget to check that there is enough space on event file target partition or disk.

Setting values to variable components once for all

We are about to create an automatic data collection and split of data related to deadlock. The stored procedures presented above have variable input and output and so are parameterizable.

We will now define, once for all, values to these parameters as follows:

For simplicity of management, these two tables will be stored in the same database as the stored procedures.

In terms of Transact SQL, this means the script that will setup the automation process will contain following lines, assuming we are already connected to the appropriate database:

For an automation mechanism, we have multiple choices, but, for simplicity, we will choose to create a SQL Server Agent Job and schedule its execution regularly so that collection of deadlocks information won’t be too long.

Now, we will review the steps we should follow in order to create a SQL Server Agent Job that will call both Monitoring.CollectDeadlockInformation and Reporting.ShredDeadlockHistoryTbl procedures.

Each procedure call will be defined as a step of this SQL Server Agent Job with a transition condition: the first step (corresponding to “Collect” step) must succeed for the second step to run (corresponding to the “Transform/shred” step).

We will schedule this collection every hour as:

Here are the steps in SQL Server Management Studio (SSMS) to create such a job.

And now, the job will appear in Jobs list:

If you want to check everything is OK, you could run the job by right-clicking on it then clicking on “Start Job at Step…” in contextual menu 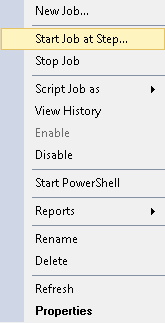 If we don’t have centralized management and execution for SQL Server Agent jobs, we have to set this job for each and every SQL Server instance. To do so, we could follow these steps but it would be nicer to automate this process.

There are two alternatives:

Once this collection process is in place, you should take time to define a data management process that will delete rows that are too old and so not needed anymore.

This closes our series of articles about deadlocks.

We’ve made a great journey from the first article, where we learned what a deadlock in contrast to blocking is, until this one, where we used everything we defined in previous articles to create an automated collection of information about deadlock.

If everything went successfully and collection runs regularly, we are now able to report issues to developers or support teams with valuable information they can use in order to fix recurrent deadlock signatures.