This document is intended for application developers and database administrators who plan to evaluate performance for any computer hosting a SQL Server instance.

Let’s say a new physical server has been delivered and we have to test its performance in regards to its future destination, which is a database server. For newbies, there are a lot of questions that emerge:

Most questions out there should lead us to following steps:

There is a bunch of tools that we can use to do a performance test:

In conjunction with these tools, it’s worth using a database monitoring tool so that we can collect and historize performance statistics. Here are some of the tools that can be used:

Here are the choices made for the purpose of this article:

The latest version for this tool is the 9th and can be downloaded for testing (and purchase) on its dedicated web page.

The installation is pretty straightforward, so it won’t be reviewed here.

Once PerformanceTest is installed, we can launch it. We will get following window. 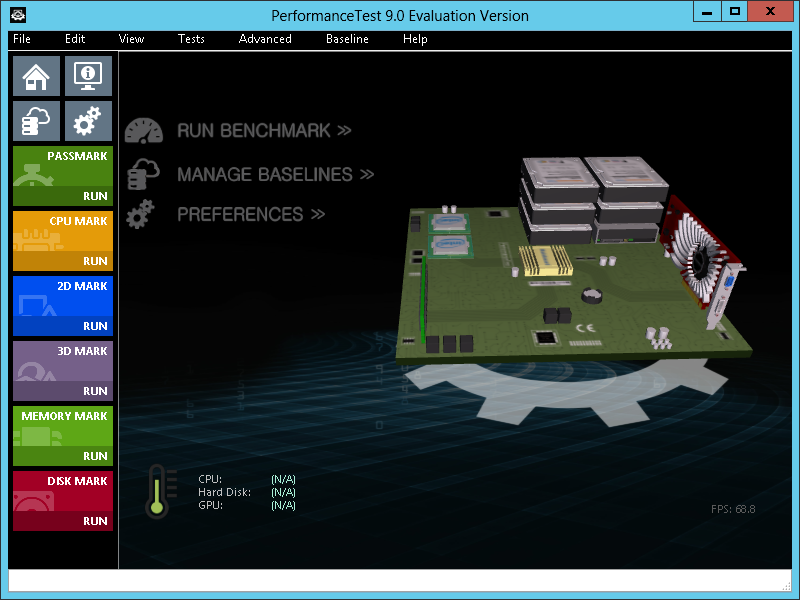 As we can see, there are multiple options available. We will just click on “Run Benchmark” to run all the tests. We are prompted following message to which we can answer “Yes”.

And the benchmark begins… 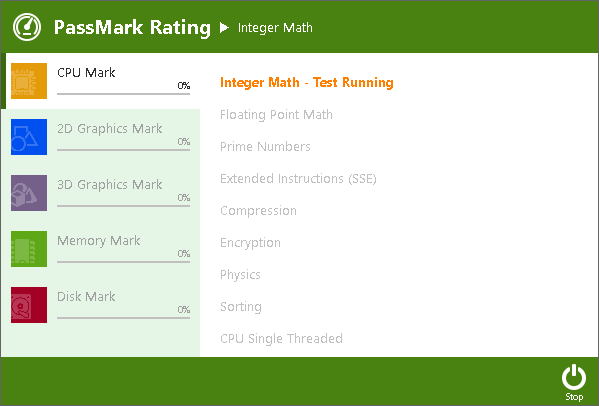 Once the tests are done, you will get a score that you can compare to others or between computers in order to evaluate performance. 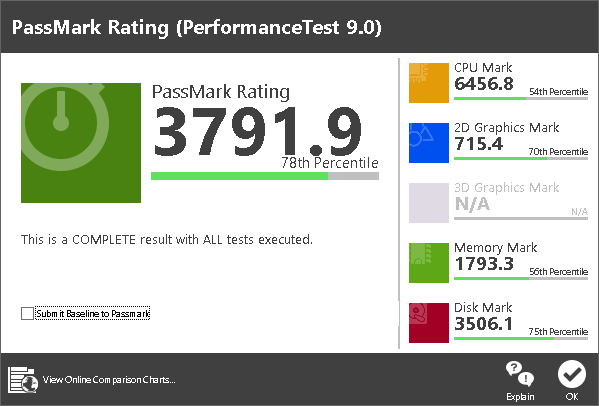 In this example, the 3D Graphics Mark is grayed because I did the test on a virtual machine without 3D acceleration.

If we get to detailed test data, we can see that there is a preamble testing for database operations:

Go to https://www.hammerdb.com/download.html to get back the latest version of HammerDB.

The installation process is straightforward and won’t be discussed.

So, the first step is to get back latest version of this stored procedure and set this up to the target SQL Server instance we will be testing.

Preferably, this procedure should be installed in a database reserved to DBA usage, let’s call it [DBAMGMT].

We can check the stored procedure actually works with following statement:

This statement will be used to define a SQL Server Agent Job that will run every 10 seconds during the whole performance test.

Here is the code to create such a job:

Previous script will drop an existing SQL Agent Job. It will also create the job disabled. It will be up to the tester to enable and disable the job for his tests.

One needs to set the database names in red according to its desire.

You will find below some useful queries against collection tables that will allow the generation of report charts. Parts in red have to be changed before execution.

An excel worksheet model is available to generate charts for some statistics collected during benchmark test. Its name is “MDL-0020 – sp_BlitzFirst graphs”.

The HammerDb tools will create a database which will contain the schema and database objects used for benchmarking. This schema represents the activity of a firm with one or more warehouses.

If it’s the first time we run this tool against SQL Server, we ought to create some test databases with different numbers of warehouses.

Steps to create a test database

Let’s first review how to create a test database to use as a target for HammerDb.

To do so, we will first step create an empty database (with HammerDb) called [TPCC_x_WH] where x represents the number of warehouses we will create. The approximate (but unconfirmed) database size computation formula is 100Mb per warehouse. 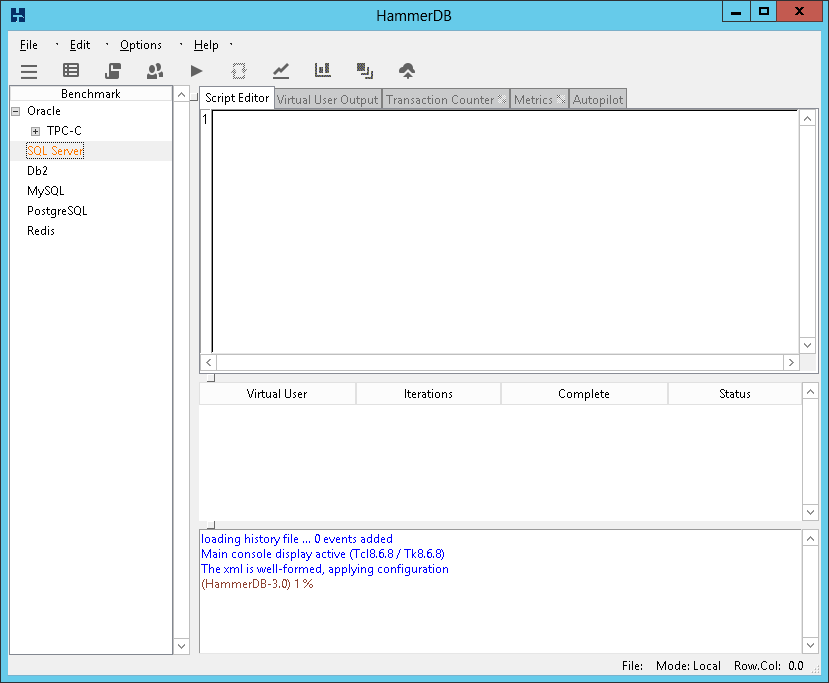 We will double-click on SQL Server and select TPCC benchmarking option (for an OLTP simulation) then click on the “OK” button. 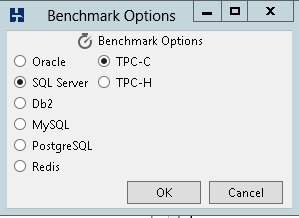 We will get a confirmation message:

And the display is now for SQL Server. We can expand the “SQL Server > TPC-C “ tree node, go down to “Schema Build” and double click on Options

We will be prompted a dialog in which we can set the actual target computer and databases so as the credentials to be used for testing.

Here is an example of one warehouse: 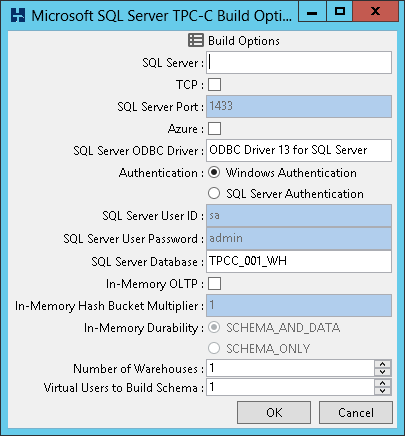 Once you hit “OK”, double-click on the “Build” leaf. A confirmation will be asked.

Once, we clicked on the “Yes” button, we will have to wait for HammerDb to complete the creation of its testing schema:

Once the creation is complete, you will see following message (green box). 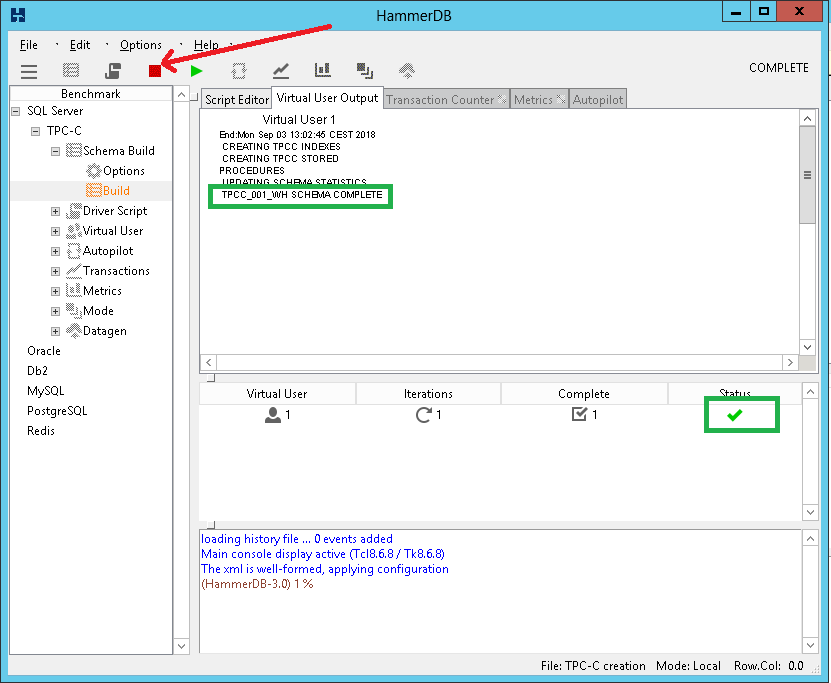 Hit the red stop button to stop the thread used to create the database.

Now the database is ready and as we won’t stop at this point for performance testing, it’s worth taking a backup of this database.

Databases to create for benchmark

Four databases should be created and backed up on the lowest version of SQL Server with following a number of warehouses.

It’s strongly recommended to take backups of these databases as the creation process is really time-consuming.

Here are the steps to follow to fire a test against a given [TPCC_x_DW] database. We will assume you let HammerDb open.

Expand “Driver Script” node and double-click on the “Options” leaf. 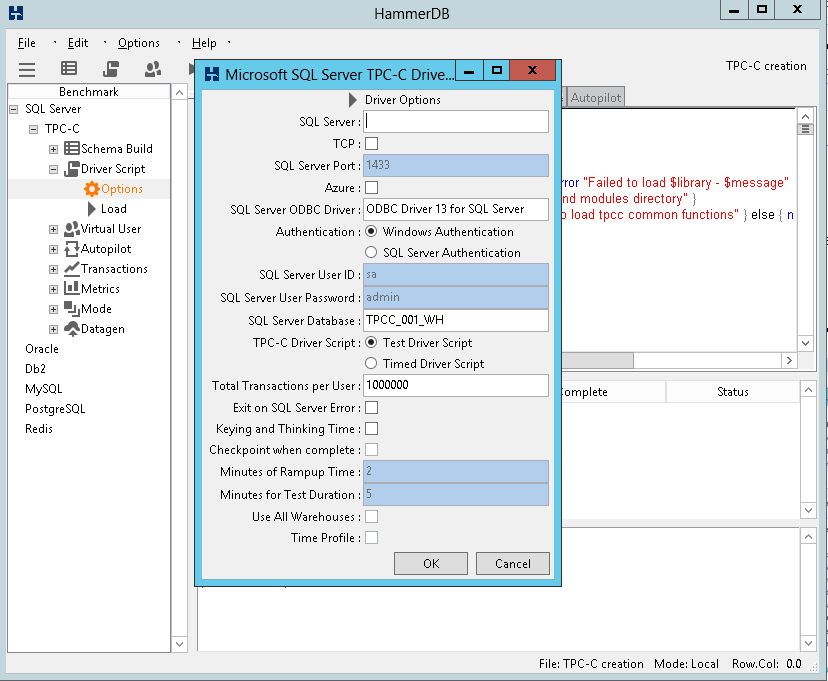 Actions to be done:

The settings dialog should look as follows after step 6: 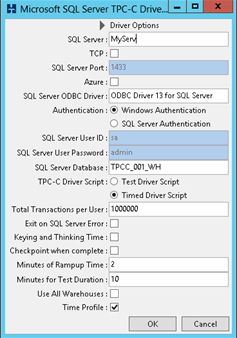 We could also check the “Checkpoint when complete” option if we use the AutoPilot mode that we will discuss in following subsection.

Now the options are set, we can generate the script that will be used by HammerDb. This is done by clicking on the “Load” leaf of tree hierarchy in the left panel:

Now it’s time to tell HammerDb how many users will be using the database defined in “Driver Script” options.

Virtual users refer to threads that will be created by HammerDb during the test. Their number can be configured in the “Virtual Users” node. 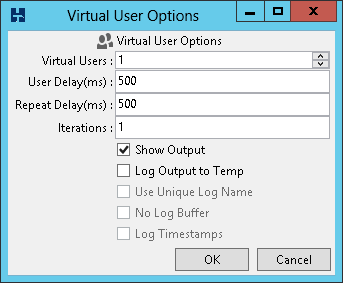 Most of the time, we will fire more than one test where only the number of virtual users vary. There are two ways to make it. The first one is to perform as many tests as virtual users count variations. The other one is to use the “Autopilot” mode of HammerDb.

To enable the Autopilot mode, we will expand the “Autopilot” node and double-click on “Options”. This opens up a dialog in which we will select the “Autopilot enabled”:

As we have a ramp-up of 2 minutes and test duration set to 10 minutes, we will set minutes per test value to 15 to be sure everything is ok.

We will also replace the default virtual user sequence by following:

Feel free to create your own virtual user’s number sequence based on the requirements for the application that will be using SQL Server.

For instance, an alternative could be:

Anyway, with the first sequence, the dialog will look like this: 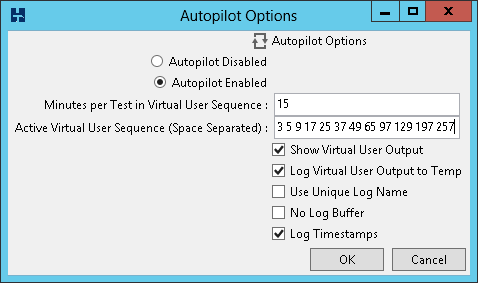 We can click on the “OK” button to close the dialog.

Before digging into the execution of AutoPilot mode, there is a step not to forget: the activation of the performance statistics collection job.

This can be done with following T-SQL statement:

Now, everything is ready and we can double-click on the Autopilot button: 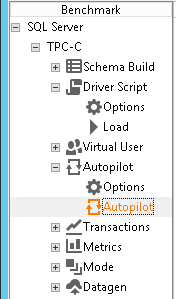 It will open an “Autopilot” tab in the central pane:

We could keep track of these two numbers associated with the number of configured virtual users in order to create charts like this one: 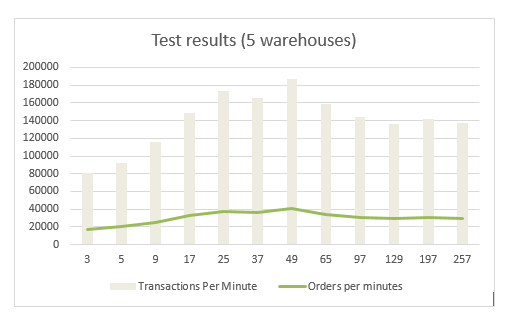 You could also create charts with SQL Server statistics like “Page Life Expectancy” or “Average Wait Time (ms)”. As we can find the time window during which a test occurred, it’s pretty easy to restrict data sets to just this time window.