I recently did some research to analyze skewed data distribution in SQL Server. This article is the outcome of my analysis to share with SQL Server community.

SQL Server understands its data distribution using statistics. The SQL Server query optimizer then uses the statistics to calculate estimated row counts when executing the queries submitted by users. The accuracy of estimated row count is crucial to get optimal execution plans. The SQL Server query optimizer is a complex mathematical component and it does a decent job to create better execution plans during a very short period of time.

First, you need to download the sample data which I used for the demo scripts as well as the stored procedure named, analyze_skewed_data from the link provided below.

Please use this link.

Use the following code to create a new database called, SkewedDataDB and a new table called, bigtable.

Then, use the following code to load the initial data and then insert the same data set again to make skewed distribution.

Note: Change the path to point to the text file you just downloaded.

After executing the preceding query, the bigtable should have more than 38 million rows. Since the same data set is inserted twice, it creates a skewed distribution.

You can check the exact row count of the table using the following code.

At this point, the data set is ready. Let’s create a non-clustered index on id_1 column before we execute some queries against this column.

See the Graphical Execution Plans of the preceding three queries below in sequence. 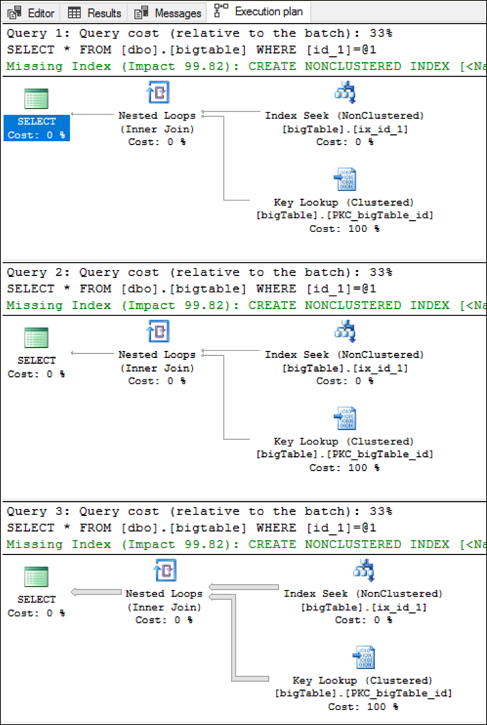 You might be wondering about the, “missing index” warning even though the column, id_1 has an index. However, in this case, missing index hint is for the covering index. So please ignore the warning since it is not related to our discussion.

If you hover the mouse pointer to Index Seek operator in any of the three execution plan(s) mentioned above you would see something like below; 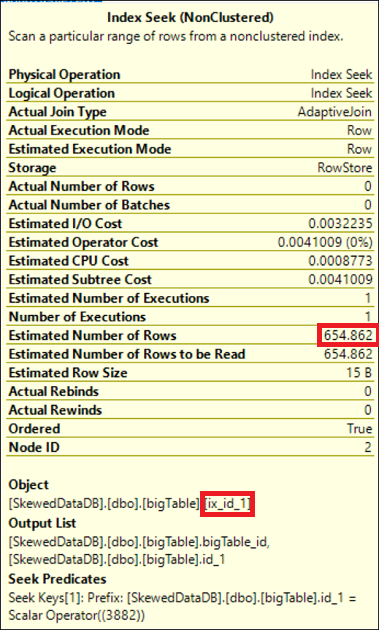 If you check the Estimated Number of Rows of the Index Seek operator in all three execution plans, it will be 654.862. See below table for the comparison of Estimated vs Actual row count of the query executions stated above.

We can verify it by observing the histogram of the ix_id_1.

Let’s check all the statistics available for the table.

Figure 3: All the stats related to bigtable.

Let’s look at the histogram of the index, ix_id_1.

First, you need to get the stat id of the statistics object. You can use the following code for that.

Note: The DMV, sys.dm_db_stats_histogram is new to SQL Server 2016. It has been introduced in SP1 CU2. So, in case you do not see this DMV in your SQL Server, please double check the latest patch level, and install SP1 and CU2. This DMV comes handy when you want to further analyze the histogram programmatically. Alternatively, you can use DBCC SHOW_STATISTICS command as well but you need to get the result into temporary table and then join with other tables. So, it’s a little bit of extra work there.

Figure 4: The Histogram of the index ix_id_1

The number 654.862 is equal the Estimated Number of Rows in the Index Seek operator of the all three execution plans. Literally, if you specify any value between the RANGE_HI_KEY 3881 and 43551, SQL Server query optimizer estimates the row count as 654.862 and no matter how much actual number of rows returned by the query. This is based on the statistical understanding of the data distribution in column, id_1.

We can analyze the actual data set between the steps (2 and 3) in the histogram mentioned above. Use the following query to extract all the rows and aggregate the data for the index column, id_1. 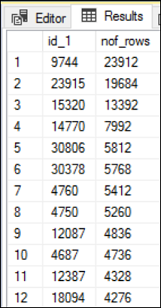 Creation of a statistics is very light weight process unlike an index creation it does not consume lot of server resources. Execute the queries again and check the estimated and actual number of rows in Index Seek operator. See Table 2 for more details.

Table 2: Estimated and actual row counts after the filtered statistics.

Note: 3 is the stat id of the filtered stat.

How to identify Skewed Data in your table

To create filtered statistics to address the skewed data issue, you need to identify the step(s) of the histogram that needs filtered statistics. Analyzing it manually would be a cumbersome task. So, I created a stored procedure which accepts a table name and a stat id as arguments and analyze the data by calculating standard deviation (SD) and coefficient of variation (CV).

Note: This stored procedure is still in beta version. So be extra careful when you run this in production for very large tables (VLT). Appreciate your feedback on this and any improvements that you think is necessary.

Download the stored procedure (analyse_skewed_data) and create it, in the database.

As shown in Figure 6, the result is ordered in descending order of the variation (CV) column. The range_high_key_from, range_high_key_to, range_rows, distinct_range_rows and average_range_rows are directly from the histogram of the statistics being analyzed. Explaining those information is out of scope of this article.

The mean column is same as average_range_rows except it is an integer. The mean, is calculated as below;

The standard deviation, stdev (SD) is the most important column in the result. The SD is a measure of spread of the data. It tells you, how much the data varies from the average (mean). The higher the SD, the higher the variation (CV) too. In other words, if you have more skewed data, you will see higher values in the variation (CV) column.

The variation (CV) column is calculated as below;

Look at the data range we have used for the preceding queries. The step range is 3881 and 43551 which is the 5th highest skewed data range according to the Figure 6. Now you can decide which step ranges that you probably need to create filtered statistics to address the skewed data issue so that the optimizer could estimate the row count accurately.

Let’s analyze the newly created filtered statistics to see whether we have successfully addressed the skewed data issue. I expect the very low values for the variation (CV) column this time. See Figure 7.

You can notice the stat id of the newly created filtered statistics object is, 3.

Look at the variation(CV) column and see all the values are less than 50%. You can observe series of NULL values as well for variation(CV) column, which essentially means, it cannot calculate the coefficient of variation because the average range rows are, 1. In statistics what it means, to calculate the SD you need to have more than 1 observation. Since average range rows is 1 means you have a single observation meaning the SD is NULL then CV is also NULL. If you consider skewed distribution, if the SD or CV is NULL means, the data is not skewed.

You can influence the SQL Server query optimizer in various ways including index hint. However, in this scenario we did influence the query optimizer in a good way which is creating additional statistics to address skewed data. We also covered the steps to identify skewed data in a table so that you can consider creating filtered statistics to improve the cardinality estimation.

Susantha Bathige
Susantha Bathige (MSc, BCS, MCSA, MCITP) is a Microsoft Certified database professional specialize in relational database product, Microsoft SQL Server. He has more than 16 years of IT experience including more than ten years in database development and administration in non-production and production environments. He has experience of other databases systems such Cassandra and MongoDB as well. Blogs: http://www.sqlservertorque.net/ and http://www.databasetorque.com/