It’s not often that I write negative articles surrounding SQL Server’s latest release but ever since we upgraded one of our BI boxes to run SQL Server Reporting Services 2016 (SSRS 2016), I have picked up on some frustrations from my team when using the upgraded Report Manager portal due to the unavailability of features that used to exist in versions prior to SSRS 2016. I have since realized that in spite of the many exciting features and improvements introduced in SSRS 2016, there is a downside to this latest version of reporting services that is likely to leave many administrators frustrated.

In the organisation that I work for, SSRS is usually accessed by users from multiple departments i.e. Finance, Sales, HR, Customer Services, and IT. Consequently, there is usually a long list of domain users that are granted access to SSRS reports. Thus, one of the useful features in SSRS was the ability to conduct an alphabetical sort of users that have been granted access to reports. The simplest way to do this, has always been to just click on the Group or User field. Figure 1 shows an SSRS 2014 instance with a sorted list of my fictitious users who have been granted access to one of my reports.

However, following the upgrade to SSRS 2016, I now have an unsorted list of groups and users (i.e. user WIN-9P7O5S87UBG\Sifiso shown in Figure 2, is now ahead of user WIN-9P7O5S87UBG\abcUser). Instead of users being sorted alphabetically, it seems like SSRS 2016 is now sorting users based on the date they were granted access to the report. Furthermore, the ability to sort users by clicking on the Group or User field, has been removed. 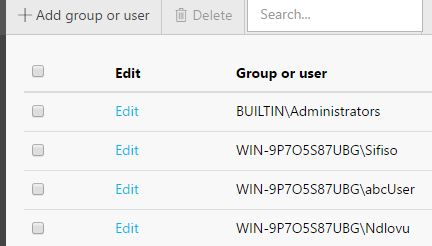 As indicated earlier, our SSRS instance contains hundreds of items that are accessed by users from various departments. Thus, part of administering such a report server instance involves doing a quick search to get to some items. Figures 3 and 4 shows the two search result pages against an SSRS 2014 and SSRS 2016, respectively. 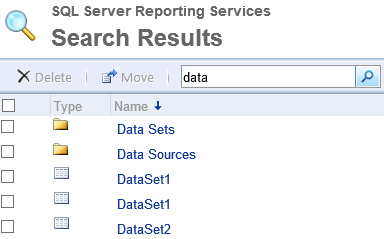 What it basically comes down to, is that our favourite search results page has also been disadvantaged by the upgrade as we are no longer unable to:

Ideally if you have a good naming convention in place for all your SSRS development, then this deprecated feature shouldn’t really be an issue for you but the fact is most SSRS developments do not follow good naming conventions, so that’s why the removal of this feature can be very frustrating for most report server administrators. Basically, versions prior to SSRS 2016 used to give you an ability to rename a file during the upload, particularly when you are uploading a file whose name already exists in the report server.

For instance, in Figure 5, I am attempting to upload an SSRS Shared Dataset whose name already exists in the report server. As expected, I get a warning message that informs me that the item name is already in use. To get around this, I renamed the Shared Dataset from DataSet1 to Dataset2, proceeded to click OK button and the upload was successful.

This ability to rename an item during an upload in SSRS 2016 has unfortunately been discontinued. As shown in Figure 6, you are now only allowed to either overwrite an existing item or cancel the upload operation.

One of the tasks of a report server administrator typically involves deploying and configuring reports. You often have to configure report data sources and shared datasets as you have to change connection strings to point to production. One benefit of configuring data source and datasets – especially when a report has multiple of these – was that when you click browse to look for a data source or dataset, you would get a tree structure that is easy to navigate.

For instance, the report shown in Figure 7 has multiple shared datasets, one of which (DataSet1) has already been configured, when I click on the Browse button to configure DataSet2, the dataset I last selected is set as the default for Dataset2. Now, I can either select the default dataset or navigate to something else. The point is, these default dataset paths usually saves considerable amount of time from having to click the root report manager folder every time you need to get to datasets stored within various sub-folders.

Well, not only has default dataset paths been removed in SSRS 2016, the tree hierarchy structure that made identifying datasets so easy has also been removed. As it can be seen in Figure 9, when I try to configure DataSet2, I am not redirected to the path of the last dataset that I selected (in this case DataSet1), instead I am redirected to a dataset root folder shown in Figure 10. If the dataset that I am looking for is 3 levels down, then I will have to click on sub-folders until I get to the right folder! 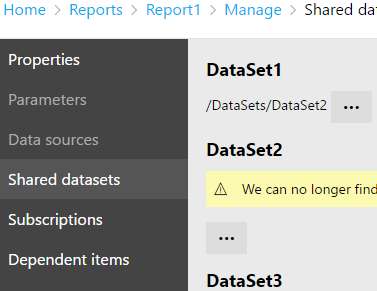 As an SSRS administrator, the context menu is one of the convenient ways to accessing some SSRS item properties. For instance, if you need to add a user to a report, you would open the context menu associated with a given report and then click Security as shown in Figure 11. This would take you directly to the Security property of the report. 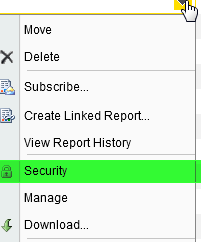 Well, if you would attempt to replicate these actions in SSRS 2016 you would notice that the Security option has been removed from a report’s context menu. 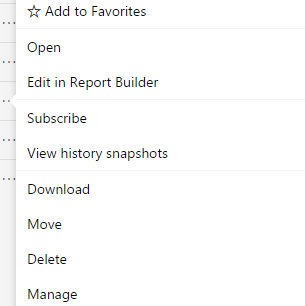 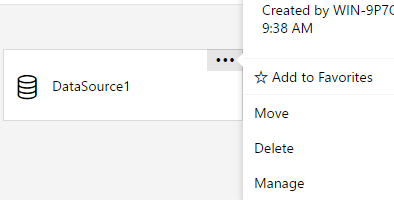 Have you ever attempted to run a report and received an error message relating to some invalid dataset or connection string? Well, one of the first things I like to do in that situation is to click on the report’s hyperlink, as shown in Figure 15. Such a hyperlink click (in versions of SSRS prior to SSRS 2016), would redirect you to a manage page in which you could navigate accordingly to fix the invalid report dataset. 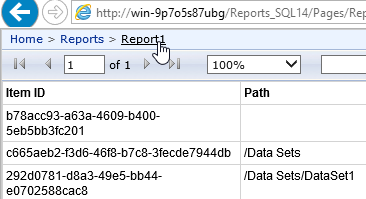 Unfortunately, this ability to click on the report name so to be redirected into the manage page has been removed in SSRS 2016, as shown in Figure 16. 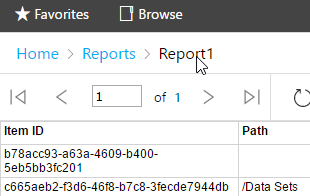 Instead of the previously easier and convenient way of getting to the manage report page, you are restricted to doing the following: