SELECT with WHERE on a clustered index

To narrow down the number of rows returned by the query, we will add the WHERE clause with a condition for the table clustered index.

As its tooltip explains, the database engine scans a particular range of rows from the clustered index. It seeks for the clustered index, not scans for it, therefore we can expect lower query cost. The engine searches for the specific key values and can quickly find them, as the clustered index also sorts the data so the search is more efficient. Finding the right record in such ordered tables is quick and resource inexpensive, which is clearly shown by the cost numbers.

If you now compare the estimated operator, I/O, and CPU costs with the costs for the same query without WHERE, you can notice that the values when the WHERE clause is used are smaller by two orders of magnitude

SELECT with WHERE on a nonclustered index

A similar example is to use the WHERE clause with the condition on the column other than the clustered index, for example on a unique nonclustered index.

Now, there are both the Nonclustered Index Scan and Key Lookup. Keep in mind that the query execution plans are read right to left, top to bottom. Therefore, the first operator here is the NonClustered Index Scan. 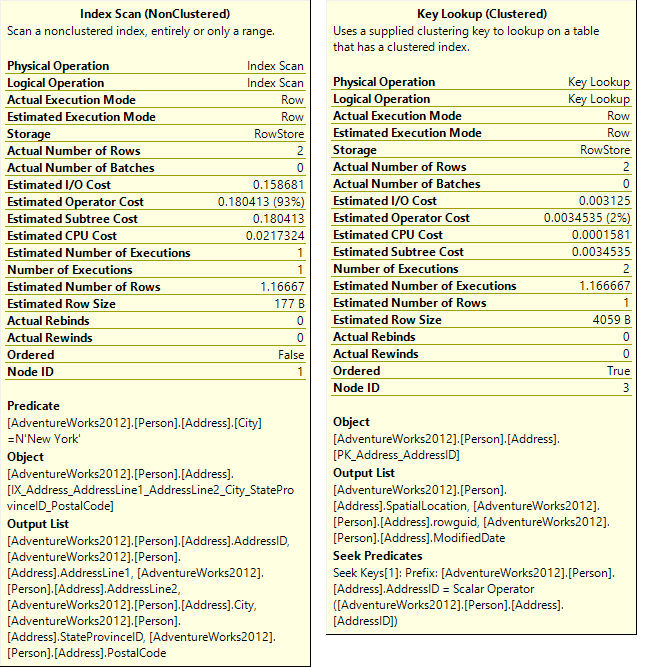 This is not an error, or warning, you should consider this message as an advice what you can do to improve the query execution performance by almost 90%. To see the recommended index, right-click the plan and select the Missing Index details option.

The option returns the index details along with T-SQL for creating it.

All you have to do is enter the index name, remove the comments, and execute code

As you can see, the operators are the same, but there’s no warning anymore and the cost is distributed almost equally between the Index Seek and Key Lookup. While the Key Lookup cost stayed the same, the Index Seek cost is significantly reduced.

However, it’s highly recommended not to create all indexes that are reported as missing by Query Optimizer in the query execution plans. Keep in mind that it’s only a recommendation for the specific plan and that it doesn’t mean that the whole system and workload would benefit from the index. As indexing has benefits as well as downsides, it’s necessary to determine whether this index will really improve overall performance. There are several factors you should consider when determining necessity of the index. The first one is how often the query is executed.

The Index Scan output list shows only some of the table columns. These are the columns specified in the IX_Address_AddressLine1_AddressLine2_City_StateProvinceID_PostalCode index: AddressLine1, AddressLine2, City,StateProvinceID, and PostalCode. The clustered index and primary key column AddressID is always returned. The SELECT statement executed must return all table columns. The rest of the columns are read by the Key Lookup operator. The key value AddressID is used in the Key Lookup. As shown, the Key Lookup returns the rest of the Person.Address columns

A Key Lookup indicates that obtaining all records is done in two steps. To return all records in a single step, all needed columns should be returned by the Index Scan.

The simplest solution is to specify the list of columns returned by the Index Scan.

The SQL Server query execution plans can be complex and difficult to read and understand, as same code can be executed using different operators. As shown, the query execution plan structure depends on the query executed, table structure, indexing, and more. In this article, we focused on the table indexing and two basic query statements: SELECT and WHERE. We showed how a column list in the SELECT statement and WHERE condition on various columns in a table can significantly affect query execution and its performance.