SQL Server Management Studio provides a set of standard reports that show basic performance information. These reports are available out of the box, no previous installation and configuration is needed. There are more than 20 reports that show usually required monitoring and troubleshooting information at the SQL Server instance level.

As these reports don’t provide enough information for SQL Server performance monitoring and troubleshooting, Microsoft has created a set of performance dashboard reports that provide more insight into what’s going on with your SQL Server.

Getting started with Performance Dashboard Reports

SQL Server Performance Dashboard Reports are custom reports made to make performance monitoring easier. Keep in mind that these are ready to use reports and SQL Server Reporting Services don’t have to be installed on the SQL Server where you will use them.

Similar to standard reports, these reports help with identifying CPU usage, IO activity, blocks, bottlenecks, missing indexes, etc. As the values for the reports are mostly obtained from dynamic management views, such as sys.dm_os_performance_counters, sys. dm_os_memory_clerks, sys.dm_exec_requests, etc. no overhead is added to monitor the performance. To be able to query these views, the SQL Server login must have the VIEW SERVER STATE server permission.

How to use the reports

The Performance Dashboard Reports are not listed, like the Standard reports are, but opened as files

This is the main dashboard from which you can go to all other available reports by selecting the links in the report.

If you haven’t disabled the Run Custom Report warnings, each time you click a link in the report, you will get the path and the name of the Performance Dashboard Report that will be opened, so you can match reports in the dashboard to the .rdl files in the Performance Dashboard folder, as their names aren’t always identical. For example, the Cache hit ratio for the User requests opens the wait_buffer_io.rdl report.

The dashboard shows processor usage for the last 15 minutes, by both SQL Server and operating system, and basic information for current and historical activity.

A recommended value for the processor usage is up to 80%. Peaks when some heavy processing is performed are acceptable. Occasional peaks without a known reason should be investigated. If the processor usage is constantly over 80%, consider deeper query, index, database design analysis, adding more hardware resources, or distributing load on other servers.

To go back to the parent report, click the Navigate backward icon in the report menu (the first on the left), or press Ctrl and – on the keyboard.

The recommended value is higher than 95%. However, this metric can be misleading, as high values are shown even when performance suffers. Therefore, it’s recommended to use some other memory metrics, such as Page Life Expectancy, Page reads/sec, and Free Pages

The Waits report shows the information about the SQL Server processes waiting to be processed. The information is obtained from the sys.dm_os_wait_stats dynamic management view.

SQL Server supports more than 200 wait types, but the report shows similar waits grouped into the same category with user-friendly category names. For example, all waits where the wait_type column has the value like LCK_M (LCK_M_SCH_S, LCK_M_SCH_M, LCK_M_S, etc.) are summed and shown as Lock waits in the report, all waits with the wait type like LATCH (LATCH_NL, LATCH_KP, LATCH_SH, etc. ) are shown as Latch, etc.

You can find the conditions used for wait grouping in the MS_PerfDashboard.fn_WaitTypeCategory function.

The IO statistics report shows the reads and writes (percentage, number, and wait time) for each database. Note that the values shown are cumulative since the last SQL Server start.

The report also shows 20 tables with the highest IO activity and indicates whether there is a missing index on the table, as that can be a cause for IO high values.

A set of expensive query reports shows the information about 20 queries that use the most resources, grouped by different categories: processor time, duration, logical reads, physical reads, logical writes, and CLR time. The same rdl report, query_stats is used for all reports.

The information in this report is obtained from sys.dm_exec_query_stats. Note that the view doesn’t contain the information about statements other than DML statements (INSERT, UPDATE, DELETE, and SELECT), therefore, some other resource intensive operations, such as creating a full database backup, are not shown in the report, making it potentially misleading. 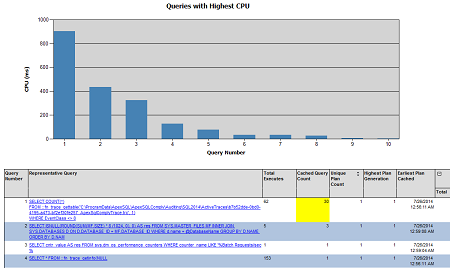 To drill down into the query, click the link in the Representative Query column, and a new report showing the query plan is opened. This report provides two new reports where applicable: the plan guide and missing indexes.

The Active traces report shows results only when at least one SQL trace is running. Otherwise, the link in the main dashboard will be disabled and the traces.rdl file will show no results. The report shows the trace start time, status, .trc file path and name, buffer size, number of buffers, as well as captured event names.