Query Optimizer is a SQL Server component that creates query execution plans based on the database objects used, indexes, joins, number of output columns, etc. The plans are represented graphically where each operator is represented with an icon

Indexes are used to enable faster access to table and view records. When executing a SELECT statement against a table without indexes, SQL Server has to read all records, one by one, to find the records requested by the statement. Thanks to indexes, SQL Server can easily find the rows associated to the key values, therefore doesn’t have to read every table row and the data obtaining process is more efficient

One of the disadvantages of using indexes is that the table indexes are automatically updated whenever table data is changed (inserted, deleted, updated), thus increasing performance costs. Another cost is that more disk space is used

SELECT * on a table with a clustered index

In the first example, we’ll use the Person.Address table in the AdventureWorks database. Note that the table has a clustered index created on the AddressID column and a nonclustered key on the StateProvinceID column

We’ll analyze the query execution plan for the following statement:

The estimated and actual SQL Server query execution plans are identical. As the query is simple, there’s no doubt how it will be executed

As the query execution plans are read from right to left, we’ll start with the Clustered Index Scan and it takes 100% of the whole execution plan time. The Select icon represents execution of the SELECT statement, and as shown in the plan, its cost is 0%

Table and index scans should be avoided as they are resource expensive and require more time. Having a seek operator in the query execution plan is preferred over scan. As the scan operator reads every row, its cost is proportional to the number of table rows. The seek operator does not read all records, just the specific ones that correspond to the query condition. Whenever possible, use a list of columns in the SELECT statement and a WHERE clause to narrow down the rows and columns returned by the query 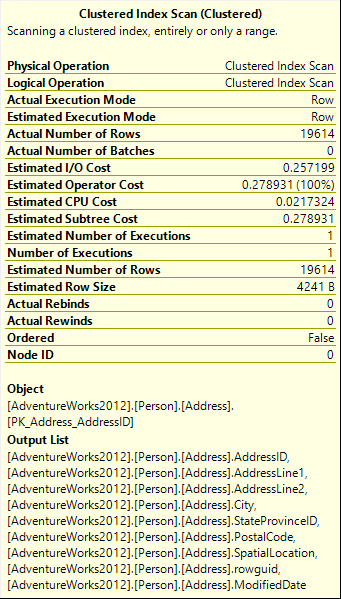 Although the estimated cost values have no units, it’s the estimated time in seconds, needed to execute the analyzed query. The cost is calculated by Query Optimizer. These values are compared to the costs calculated for alternative plans, and the lowest cost plan is shown as the optimal one

SELECT <column list> on a table with a clustered index

In this example, we will use a list of columns in the SELECT statement, instead of SELECT *

The SQL Server query execution plan is similar to the one in the previous example. The difference is that now, a NonClustered Index Scan is used 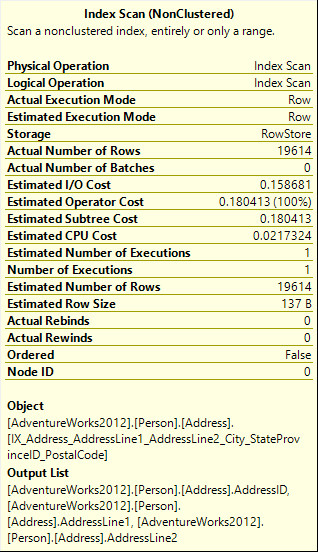 SELECT * on a table with no clustered indexes

In this example, we’ll show how the SELECT statement is executed on a table without a clustered index. For this example, we created a copy of the Person.Address table, and removed all indexes except the non-clustered index on the StateProvinceID column. The records in the Address and Address1 tables are identical, so we can use the estimated costs for comparison

The actual and estimated query execution plans are again identical

Unlike in the previous example, there is the Table Scan icon now shown instead of the Clustered Index Scan. The difference in the query execution plan operators is caused by having a non-clustered index instead of a clustered one

When all rows from a table are returned (a SELECT statement without a WHERE clause) and no clustered index is created on the table, the engine has to go through the whole table, scanning row after row 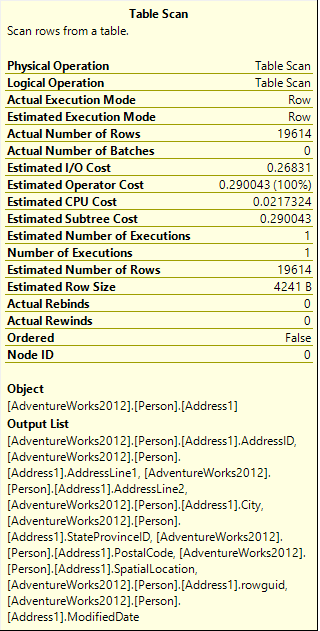 When the number of records in the table is not large, the complete table scan doesn’t require too much time. If you compare the estimates costs for Address1 and Address tables, there is only a slight difference. If we created the same test on a table that contains millions of records, the difference would be significant

In all real-world scenarios, it’s highly recommended to use the WHERE clause and qualify the columns you want to select, instead of using the * wildcard