In this part, we will continue describing important time processor counters

There are two modes for all processes executed on a Windows operating system: a user mode and privileged (kernel) mode. The operations that require direct access to memory and machine hardware are executed in the privileged mode (I/O operations, disk access, system services, etc.). All user applications and processes (this is where SQL Server belongs) are executed in the user mode

The Processor: % User Time value “Corresponds to the percentage of time that the processor spends on executing user processes such as SQL Server.” [1]

In other words, this is the percentage of processor non-idle time spent on user processes

If the Processor:% User Time high values are caused by SQL Server, the reason can be non-optimal SQL Server configuration, excessive querying, schema issues, etc. Further troubleshooting requires finding the process or batch that uses so much processor time

The Processor:% User Time values close to 100% are a clear indication of processor bottlenecks. It means that user processes are using the processor all the time. To troubleshoot the issue, the first step is to determine the user application that causes the bottleneck

In an environment with multiple SQL Server instances running, it’s important to monitor each instance performance individually, to be able to easier troubleshoot excessive processor usage

It’s expected that complex operations use more processor time. The value graph goes up then, but it should fall down to the baseline value afterwards. The Processor: % User Time value can oscillate around the baseline approximately 10% during the normal operation. If the peaks appear without an obvious reason, the user processes executed on the machine should be investigated

“If the processor is very busy and this mode is high, it is usually an indication of some type of NT service having difficulty, although user mode programs can make calls to the Kernel mode NT components to occasionally cause this type of performance issue.” [1]

This is another important counter that helps determining whether the processor problems originate from internal Windows processes, or are caused by a user application

“the proportion of % Privileged Time to % User Time will depend on the system’s workload. A couple of common misconceptions are that there will be a balance between these two areas, and that each system will look the same. That having been said, a system performing the same workload over time should show little change in the ratio of Privileged to User time” [2]

If the Processor: % Privilege Time value is high, kernel mode processes are using a lot of processor time, the machine is busy executing basic operating system tasks and cannot run user processes and other applications, such as SQL Server. Using a more powerful processor can help

The recommended values for Processor: %Privilege Time are 5 to 10% , or maximum 30% of the % Total Processor Time (described next)

“This counter groups the activity of all the processors together to report the total performance of the entire system. On a single processor machine, this value will equal the %Processor Time value of the processor object.” [1]

The recommended value for Total Processor Time is up to 80% during normal operation. The remaining 20% are left for complex operations that cause peaks in processor usage, to avoid bottlenecks. If the value is constantly close to 100%, this is an indication of a processor bottleneck. To start troubleshooting, check the Processor: % Processor Time value to determine what processor handles most load

When one of the processors is using much more processor time then the others, the Total Processor Time value might be misleading, so it’s better to monitor both total and per processor values 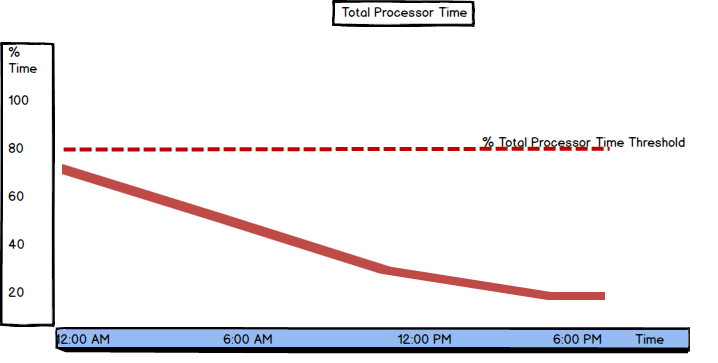 “This is the total user time of all the processors on the system.” [1]

The Processor: % User Time counter shows the user time on a single processor

Similar as above, the Processor : %Privilege Time shows the privilege time on a single processor

Monitoring these total time counters is not very useful, as for any further analysis, it’s necessary to find out the processor where the bottleneck occurs

This counter is required for a deeper analysis. It shows an entity for each thread on the processor. On a single processor machine that supports two threads, two entities are shown. To distinguish the specific thread among others, use the ThreadID value. The thread processor usage can be modified by adjusting the thread priority

Other metrics that can be monitored per thread are: Thread State, Priority Base, Current Priority, Context Switches/sec, % Privileged Time, and % User Time. These metrics are rarely used, as other metrics described in this and the previous part of the SQL Server performance series provide more useful information for processor performance analysis and troubleshooting