In this part, we will present processor performance metrics that indicate performance issues caused by hardware component problems

Hardware interrupts are among the most common performance problem causes. They can induce processor bottlenecks, the same as other, more obvious causes such as insufficient memory

An interrupt is an event generated on a hardware or software component, that sends a signal to the processor requesting immediate attention. When the processor is notified that there is a high priority event, it stops the execution of the currently processed thread, suspends all current activities, saves its state, and executes a specific procedure called the interrupt handler. After the interrupt handler finishes its tasks, the saved state is read and the processor continues where from the point where it was interrupted

Hardware interrupts can be generated on a computer component (such as hard disk or a network controller) or on an external peripheral device. They are usually caused by errors in driver configuration, general hardware failure, or excessive component usage

Interrupts/sec is a processor metric that shows “The numbers of interrupts the processor was asked to respond to.” [1]

An entity is shown for each processor on the machine, e.g. on a four-processor machine, four entities are shown

The only device that is constantly creating interrupts is a processor hardware timer that generates an interrupt every 10 to 15 milliseconds, which results in up to 100 interrupts per second

The recommended value of Interrupts/sec depends on the processor, rate of disk I/O operations, and the number of network packets. However, for modern processors, up to 1,000 interrupts per second can be considered as normal

High values of the metric can be encountered after adding a large number of new applications to the machine and they can indicate hardware problems and conflicts. Before coming to a conclusion, they should be investigated

To check the disk controller and network adapter are working properly, use Windows Device Manager and check the device status for both

Peaks can be encountered and they don’t clearly indicate a serious performance issue. If the peaks are less than 30 percent of the normal values, this is not alarming. If they exceed this value, deeper investigation is needed and the final solution would be upgrading to a faster processor

Another metric that should be checked when troubleshooting high Interrupts/sec values is the Systems Calls/sec (explained below). Higher values are encountered in systems with excessive Windows system activity 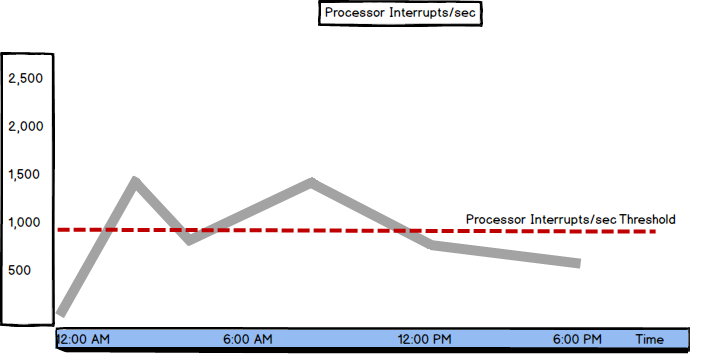 The recommended value is less than 50%. According to some DBAs, the maximum values should be up to 30 % per processor. Higher values might indicate hardware problems. The same as with Processor Interrupts/sec, in these situations it’s recommended to check the Systems Calls/sec value. If it’s higher than 20,000, it indicates that the system generates more interrupts than the processor can handle. Upgrading hardware components will most probably solve the issue

“Some components on the computer can force this issue and not really be a problem. For example a programmable I/O card like an old disk controller card, can take up to 40% of the CPU time. A NIC on a busy IIS server can likewise generate a large percentage of processor activity.” [1]

In the Part 8, we described several total time metrics – Total Processor Time, % Total User Time, and % Total Privilege Time. The same logic is used when calculating the value for the % Total Interrupt Time metric – a sum of processor interrupt time percentages for each processor (Processor % Interrupt Time) divided by the number of processors

The same as with other total times, for troubleshooting it’s necessary to monitor the interrupt time for each processor

The threshold value for normal operation is the same as for Processor % Interrupt Time, i.e. individual processors, less than 30 %

For high values of the Processor: %DPC Time metric, monitor the interrupt rate for each processor

The threshold value for the Processor: %DPC Time metric is the same as for Processor: % Interrupt Time – up to 30% 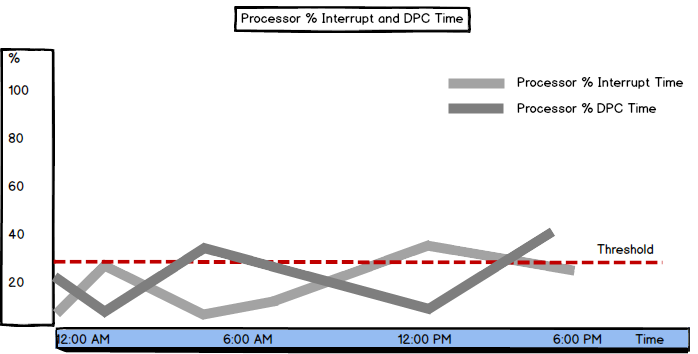 Processor: Interrupts/sec, Processor: % Interrupt Time, % Total Interrupt Time, and Processor: %DPC Time indicate hardware issues that can affect SQL Server performance. All metrics have a clear threshold that signals a problem and usually a need for further investigation and checking other performance parameter values. Replacing the existing hardware components or using more powerful ones is in most cases the right solution