In the previous part of this series, we presented the processor metrics that indicate hardware component problems that can affect SQL Server performance

In this part, we will present processor metrics that are not necessary in every performance monitoring scenario, but are useful for deeper investigation and troubleshooting

“This counter is a measure of the number of calls made to the system components, Kernel mode services. This is a measure of how busy the system is taking care of applications and services—software stuff. When compared to the Interrupts/Sec it will give you an indication of whether processor issues are hardware or software related” [1]

The normal values for System: Calls/sec are under 20,000. Higher values might indicate excessive operating system activity caused by software applications. In this case, check the Context Switches/sec value (explained later) to identify the process responsible for excessive software calls

It’s expected that the System: Calls/sec values are higher than Processor: Interrupts/sec. However, if the latter is higher, it’s a clear indication of a hardware problem

“The thread gets a base priority from the Process that created it. The priority of the thread can be adjusted by the system or through a program. This priority is used to judge when the thread is going to have access to the process and how many other threads it may jump ahead of in the processor queue of ready threads.” [1]

Monitoring the Thread Object: Priority Base metric will help you determine whether there are threads with higher priority than optimal. We have already recommended using a dedicated machine for SQL Server. Having additional applications, especially resource-intensive ones, can use resources needed by SQL Server and degrade its performance. Assigning these processes higher priority than normal will affect execution and performance of other threads and processes, and even block them. SQL Server will have to wait for the processor to handle other applications first and its performance will suffer

To see the base priority of the thread, you can use the Windows Task Manager

To change the thread priority: 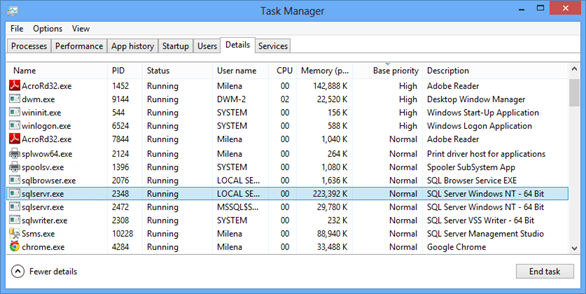 All processes have the normal priority by default, except some system processes

Now, check the priority of the SQL Server process – sqlservr.exe. By default, it should be normal. If there are some non-system and non-essential applications, processes, or services running with priority higher than normal, they can jeopardize the performance of your SQL Server. If there are no obvious or logical reasons for this, reduce their priority to normal and allow SQL Server to use as much processor time it can get

The same metric, but in different presentation is shown in Windows Performance Monitor

The values shown in the Performance Monitor graph are not descriptive like in Windows Task Manager, but numerical:

“A context switch occurs when the kernel switches the processor from one thread to another—for example, when a thread with a higher priority than the running thread becomes ready.” [2]

High Context Switches/sec values are more frequent on the machines that besides the database system host other resource-intensive applications. They can also occur on a system with several SQL Server instances

Constantly high values of Context Switches/sec and Processor: % Processor Time are a clear indication of processor bottlenecks. The ultimate solution is changing the processor to a more powerful one, or adding an additional one

Every thread running on the operating system is uniquely identified by its ID. If the same thread is executed again, it will be assigned a new ID

The Thread Object: ID Thread metric shows an ID of the process thread, necessary to differentiate a specific thread among others. This metric is useful if you’re monitoring other metrics that provide details based on the thread ID

Every process running on the operating system is uniquely identified by its ID. If the same process is executed again, it will be assigned a new ID

The same as Thread Object: ID Thread, the Process: Process ID metric is usually used for determining the right process when process details are based on the Process ID

The performance of SQL Server can be affected by other applications or by other SQL Server instances hosted on the same machine. Monitor the System: Calls/sec value to identify resource-intensive applications, check Thread Object: Priority Base to find out if any application has been given higher priority and thus eating processor time needed by SQL Server, watch Context Switches/sec to see whether all applications can get the processor time they need