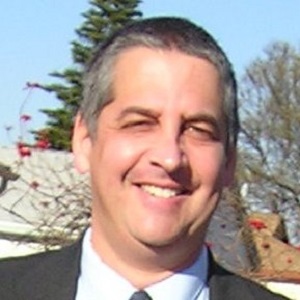 Microsoft Azure offers hundreds of cloud products, with more on the way. In the database space, Microsoft offers Azure Cosmos DB, a NoSQL database product. We can build Java, .Net, etc. applications around Cosmos DB resources. To extend this capability, this article will show how to query Cosmos DB directly from SQL Server.

We’ll start with the sample OFFICE_EQUIPMENT_DATABASE database seen in my earlier SQL Shack articles, with modifications. Built-in SQL Server 2014 Standard on a Windows 10 Education edition device, it has three tables, as shown below:

And this stored procedure, SP_SQLSERVER_COSMOSDB_OFFICE_EQUIPMENT.

Run the first script in SQL Shack article Lever T-SQL to dynamically define duplicate SQL Server database table rows to build the basic OFFICE_EQUIPMENT_DATABASE database. Then, run the below script to build the resources in that database that we’ll need for this article:

We’ll use Azure Cosmos DB to host data that the SQL Server stored procedure will query. Although Azure products can become expensive, depending on data volumes and product use, Azure offers a free trial pricing plan. The data we’ll host will fall within the trial plan limits. This SQL Shack article,Getting Started with Azure Cosmos DB, explains how to get going with it, so we won’t cover that topic in this article. For this article, we’ll need an Azure Cosmos DB resource with firewall and virtual network settings that will accept queries that originate from the internet.

The original OFFICE_EQUIPMENT_DATABASE table has two tables that we’ll clone over to Cosmos DB. We’ll focus first on the original OFFICES table. This table has six rows. The data we’ll import needs a JSON format, so first, we must convert the source data. The screenshot below shows the original data: 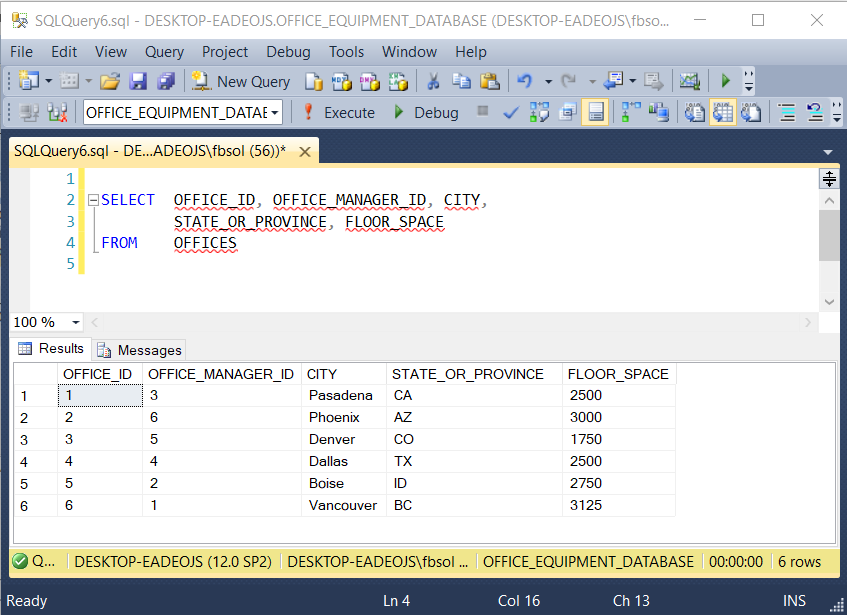 This query builds the result set seen in the above screenshot:

Every source table column becomes an expression in the SELECT clause. If needed, JSONLint, for example, can validate the output JSON format. In this query, the FOR XML PATH clause places each row into a formatted JSON row, with key/value pairs that match the column/value pairs of the original rows. To get the data ready, the empty (”) value in the FOR XML PATH() clause at line 10 separates each XML row with a default comma. At line 11, the STUFF function arguments format the result set as a string and remove the leading “.” in the original data. Save the finished result XML-format result set as a JSON file. This file will become the data we’ll import. 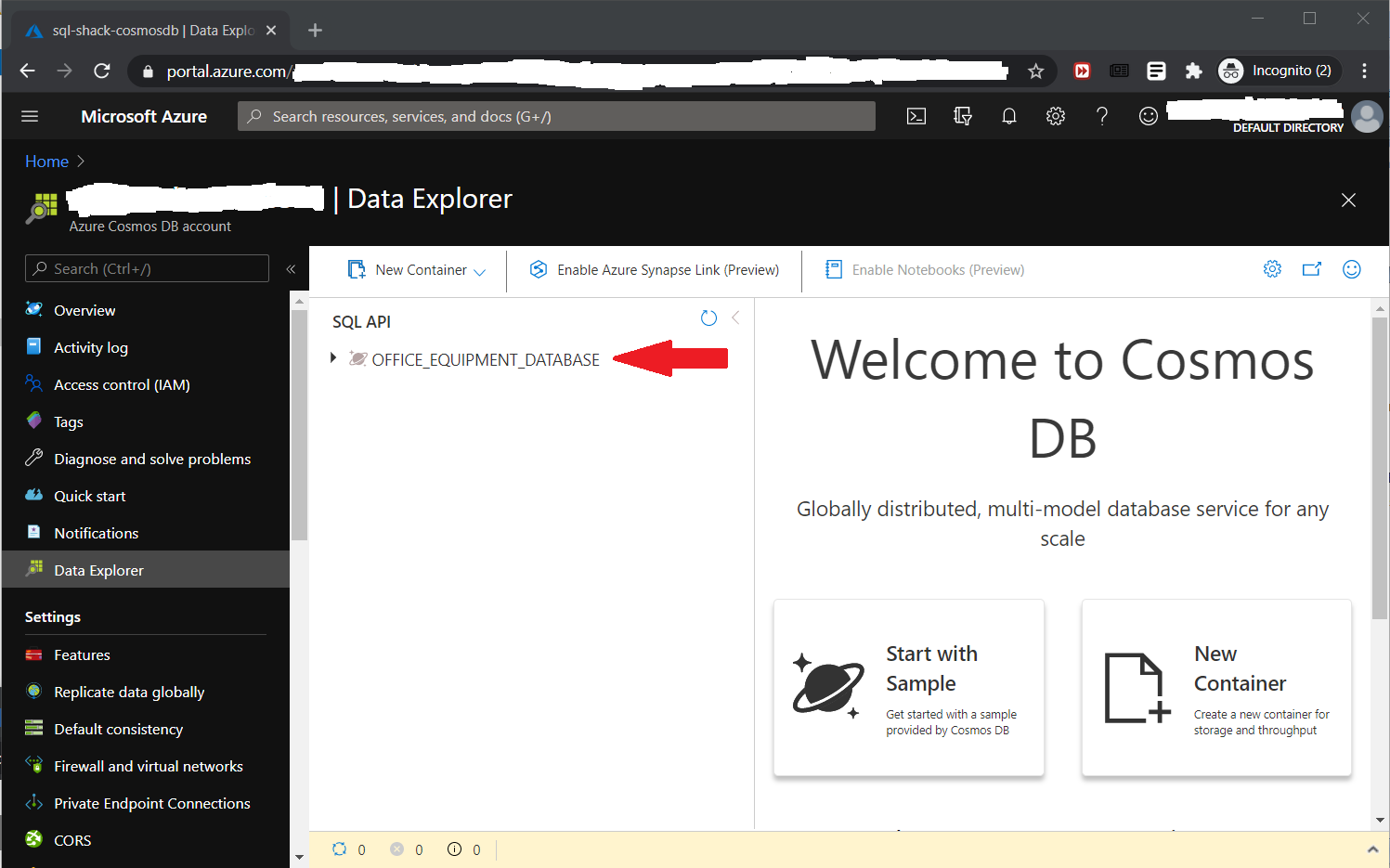 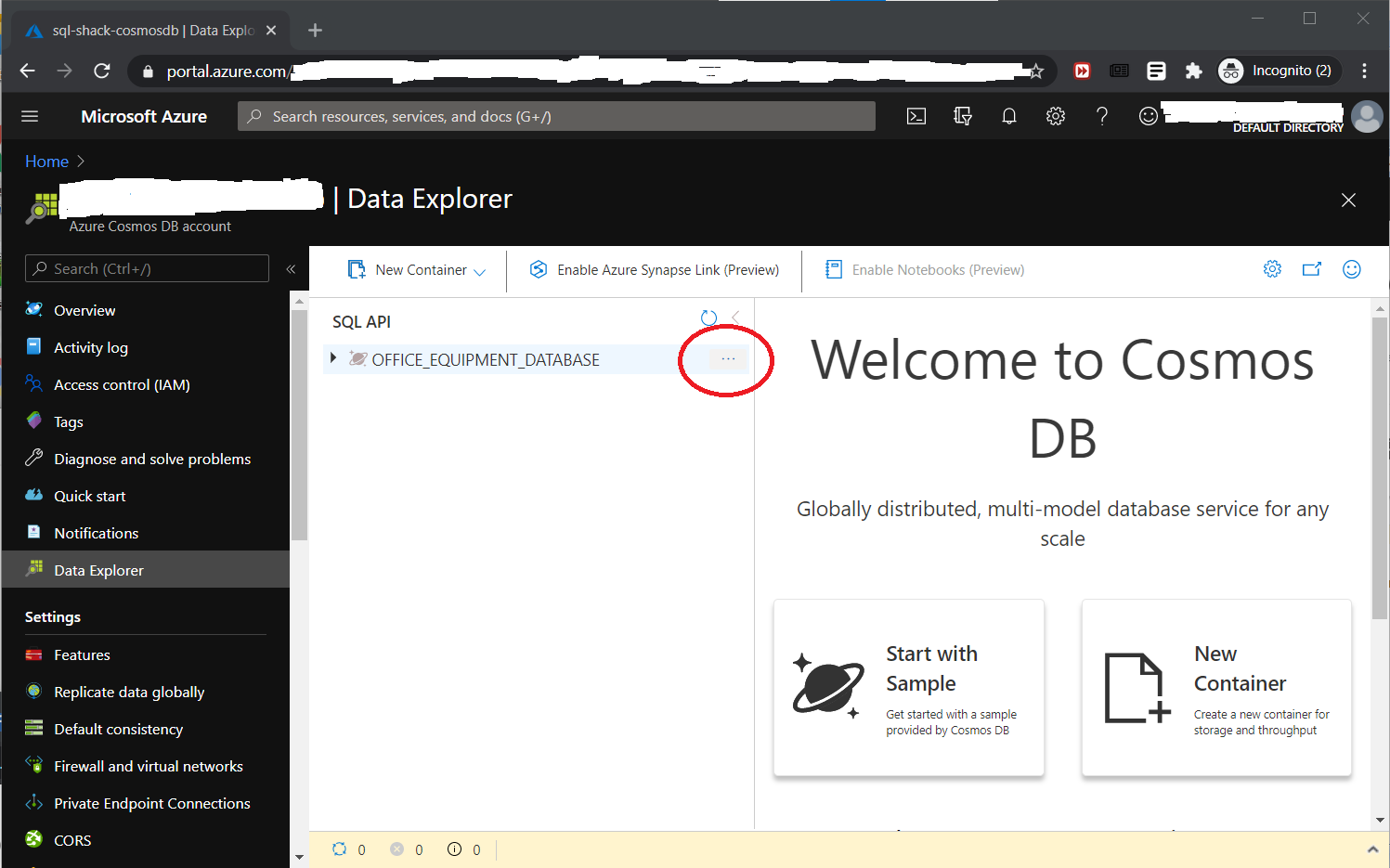 Drill down to New Container, as shown in this screenshot: 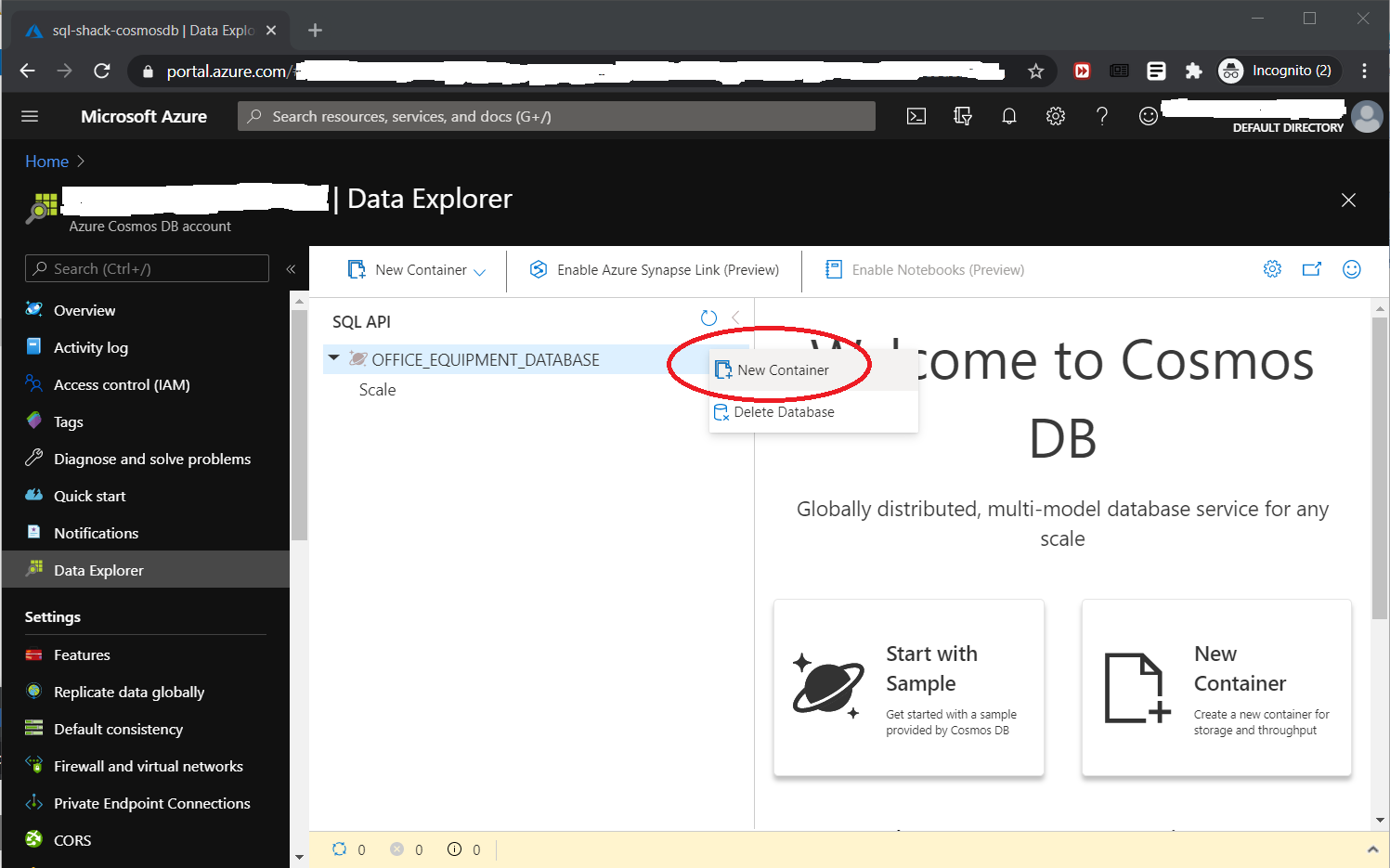 This opens the Add Container pane. We’ll call the container “OFFICES” and we’ll add OFFICE_ID as the partition key, as seen in this screenshot: 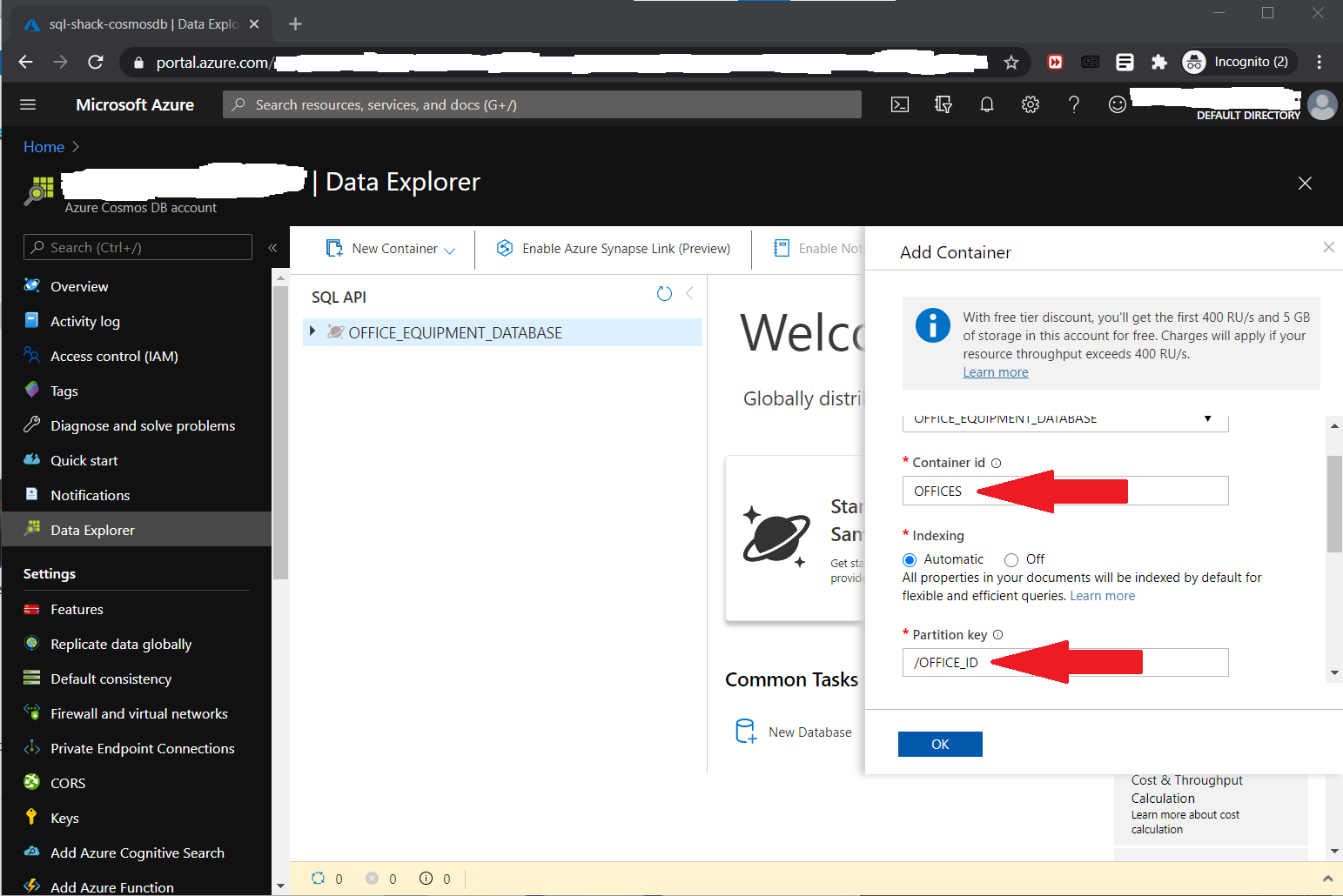 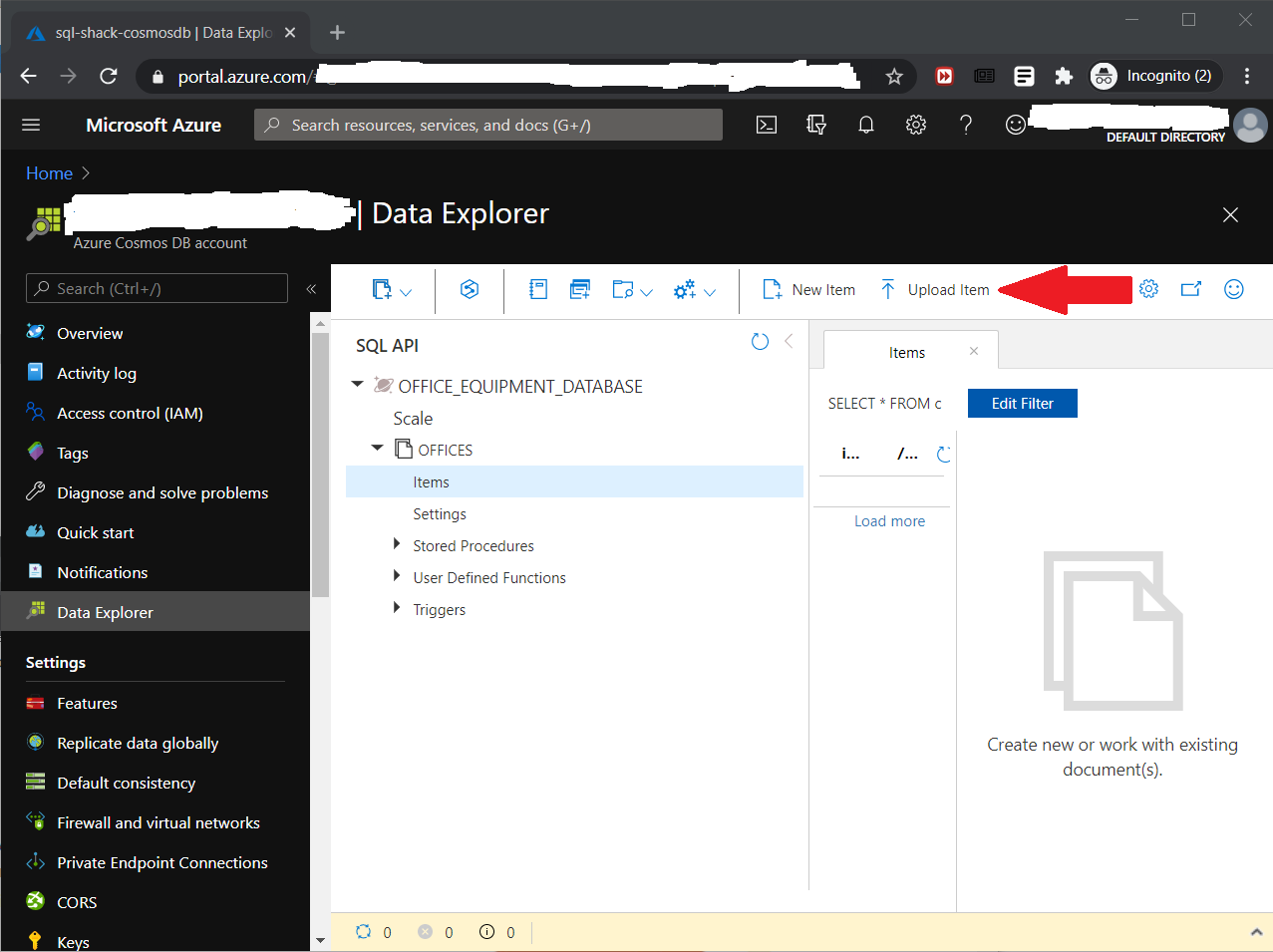 Click Upload Item to open the Upload Items pane, as seen in this screenshot: 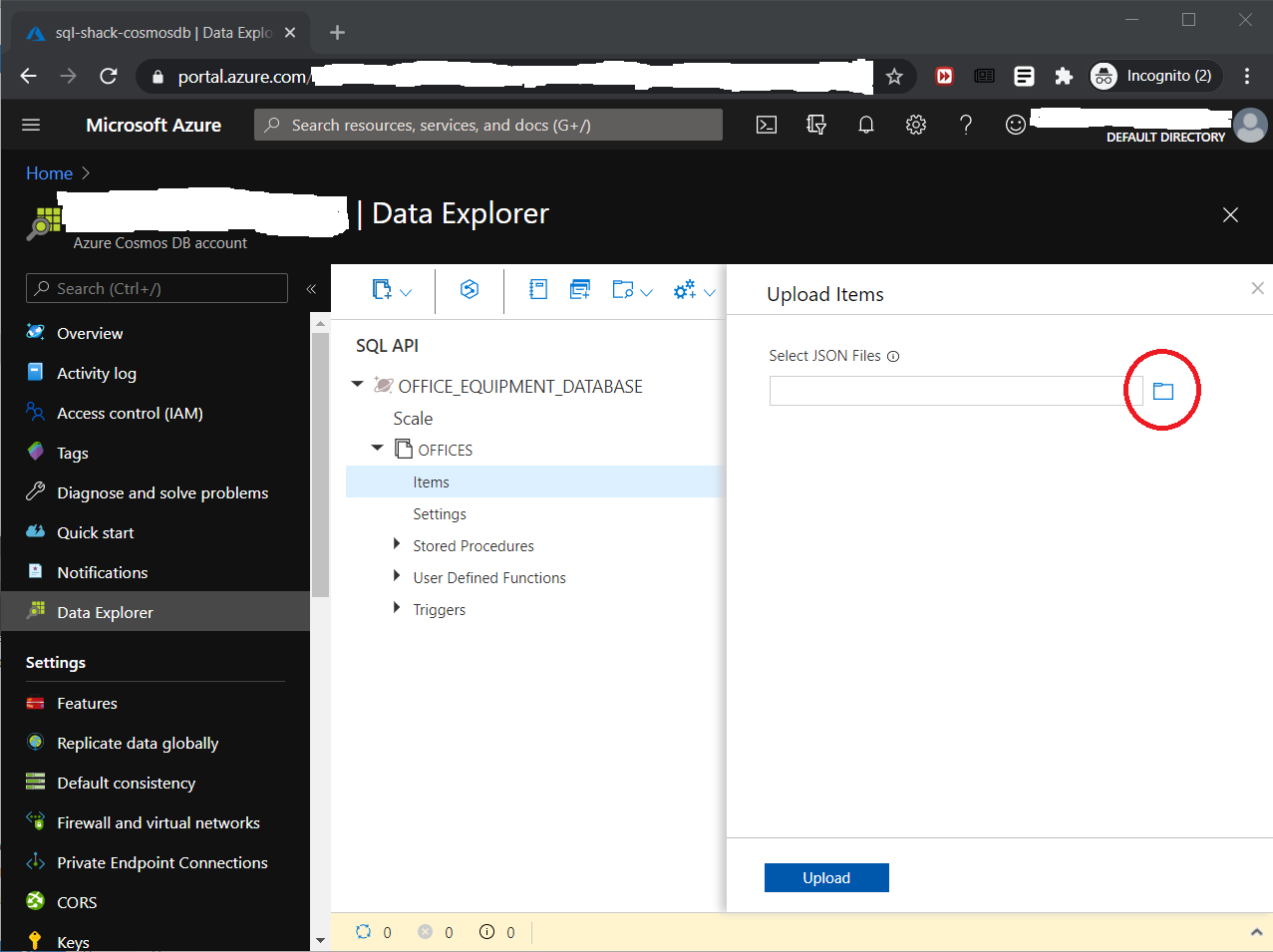 Click the circled icon to open a file picker, to upload the JSON format OFFICES table data file we built earlier. Verify that the upload steps worked with the query:

You can see in the below screenshot:

With similar steps, use the SQL Server OFFICE_MANAGERS table to create the OFFICE_MANAGERS collection OFFICE_EQUIPMENT_DATABASE. At that point, we can access both collections in the Data Explorer, as seen in this screenshot: 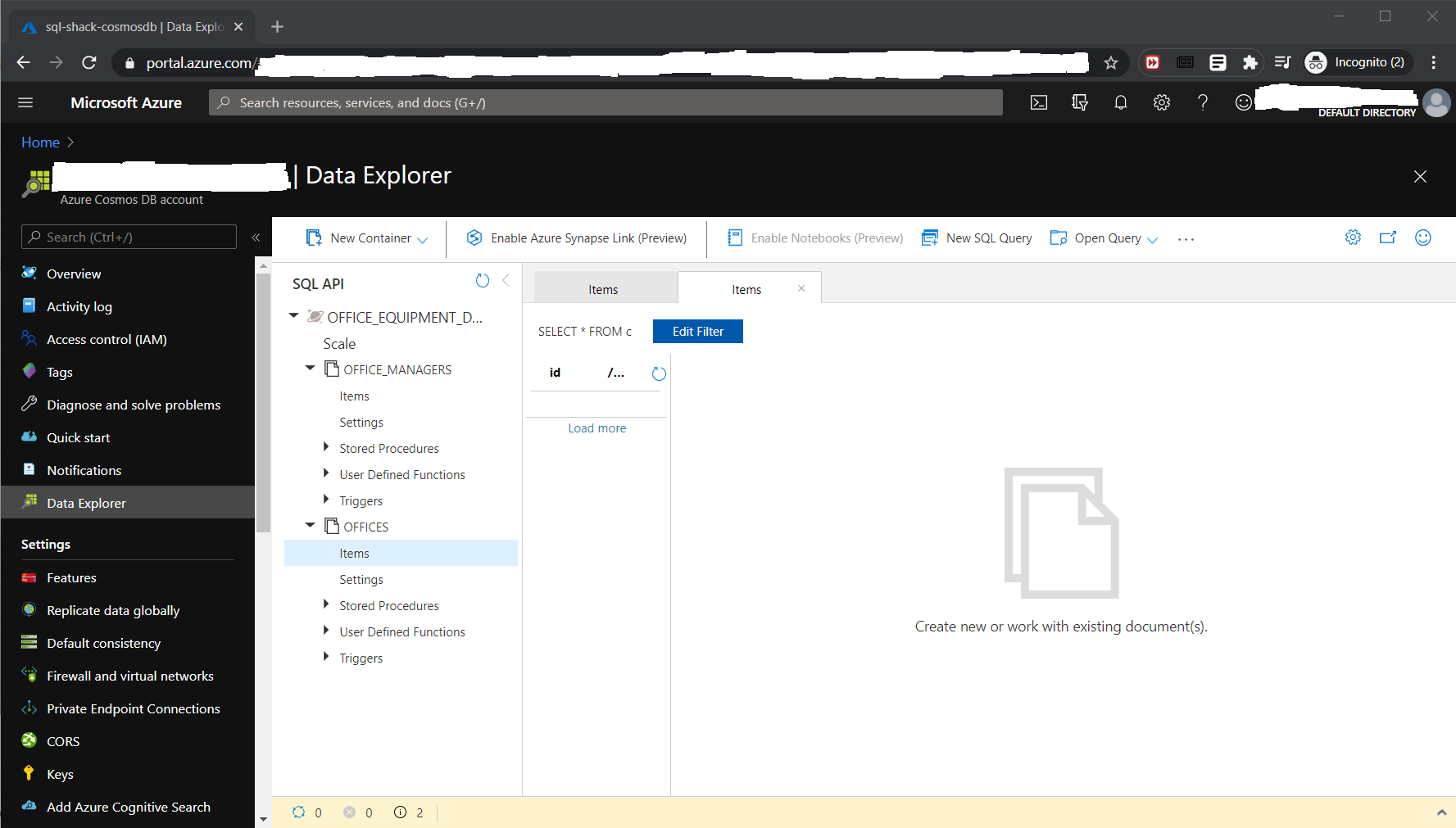 We need to make the Cosmos DB resource visible to our SQL Server instance. We’ll build a new ODBC connection for this, with a specific Microsoft tool. Starting at this page, download the relevant MSI file.

At the Azure portal, select the OFFICE_EQUIPMENT_DATABASE, and in the Settings category, click Keys, as shown in this screenshot: 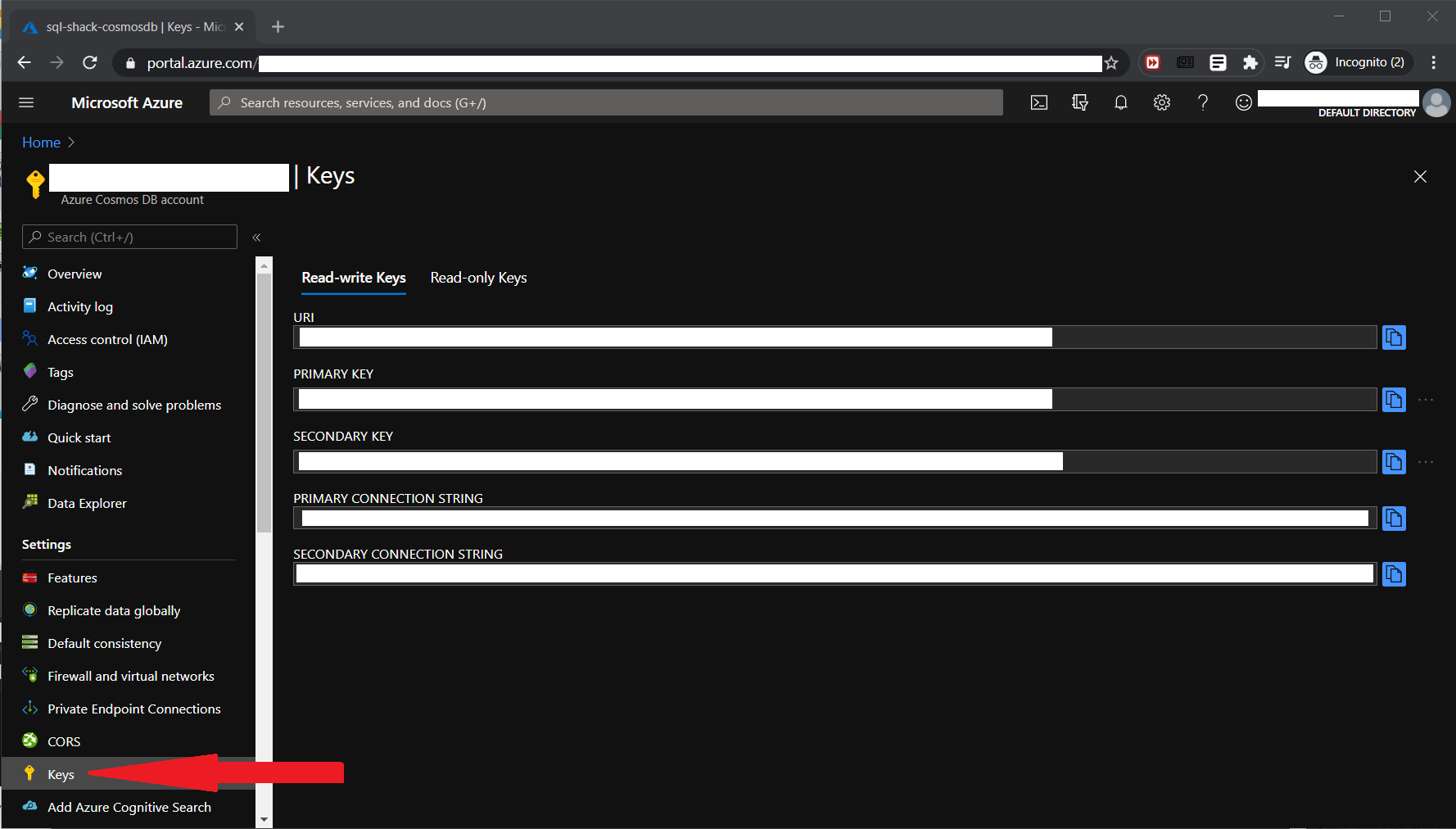 Copy the URI and PRIMARY KEY values, blanked out in the screenshot above. Next, open the ODBC Data Source Administrator tool, and click the System DSN tab, as shown in this screenshot: 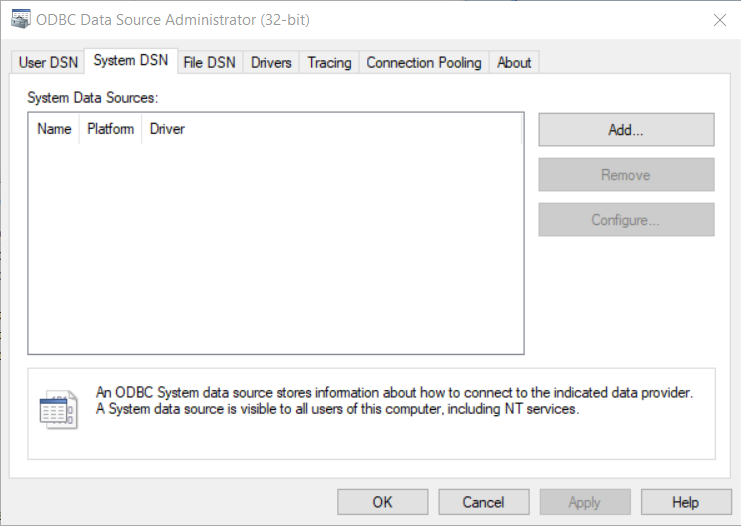 Click Add to open the Create New Data Source window. Scroll down to Microsoft Azure DocumentDB ODBC Driver and click Finish, as shown in this screenshot: 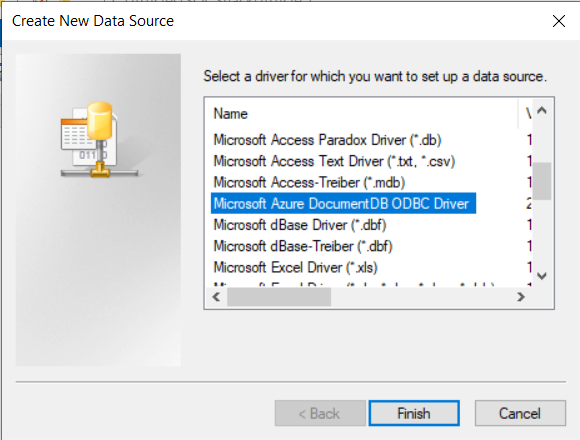 The DocumentDB ODBC Driver DSN Setup window will open, as shown in this screenshot: 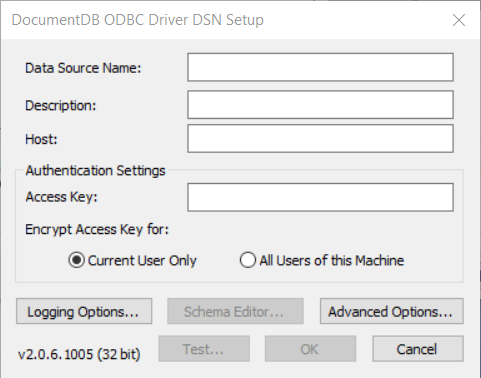 We copied values from the Keys page earlier; place the URI value in the Host box, and the PRIMARY KEY value in the Access Key box. Except for the Host textbox value – blanked out in this screenshot – it should have these values as shown: 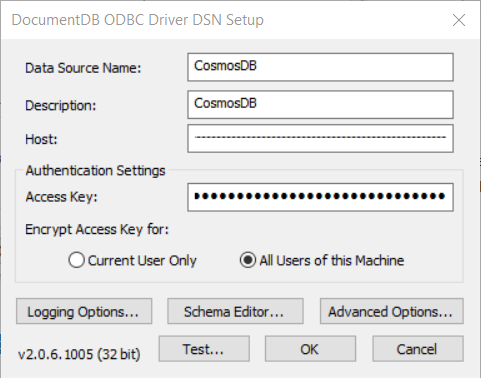 For this connection, ignore Logging Options, Schema Editor, and Advanced Options; click Test… to test the driver, and finally, click OK. The Administrator tool System DSN tab will list the driver, as shown in this screenshot: 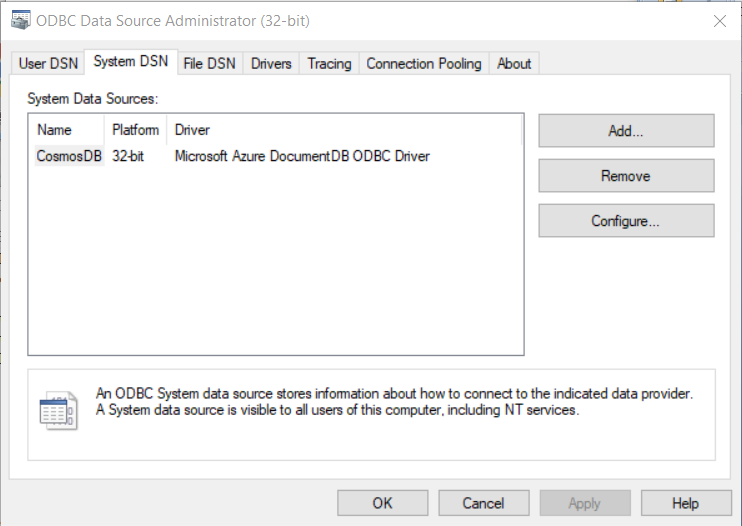 Click OK to close the tool. When building the ODBC connection, the first 64-bit MSI file might look like the logical choice to install the tool. However, it could lead to an error message, as shown in this screenshot: 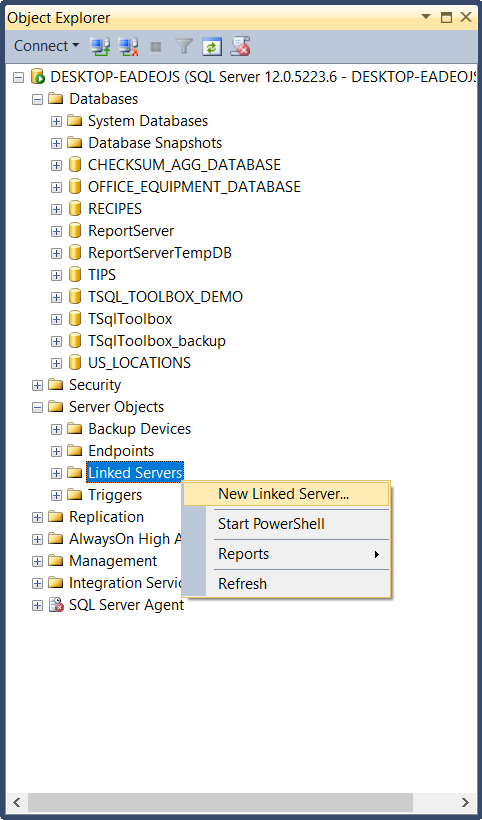 The New Linked Server dialog box will open. Fill it in as shown in this screenshot: 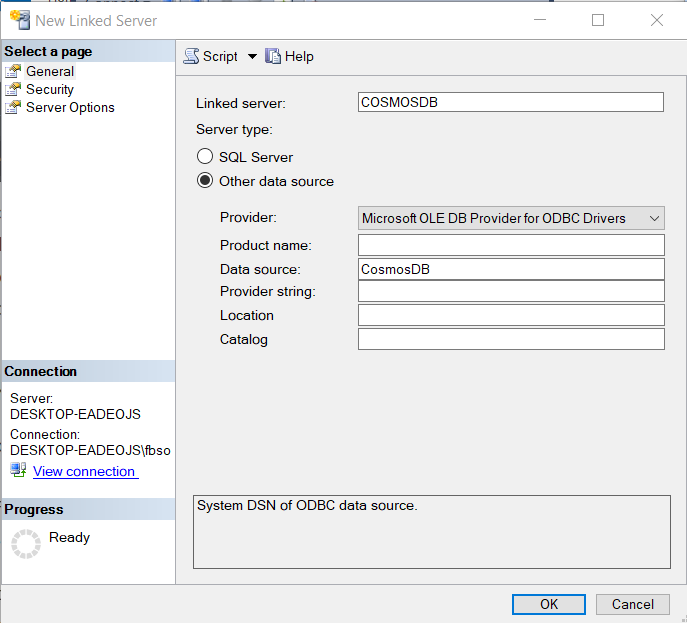 In the first textbox, we named this Linked Server‘ COSMOSDB’. In the Provider dropdown, pick the Microsoft OLE DB Provider for ODBC Drivers option. In the Data source textbox, use CosmosDB – the name of the ODBC driver we built above. Click OK. Drill down to see the collections in the SQL Server Object Explorer, as shown in this screenshot: 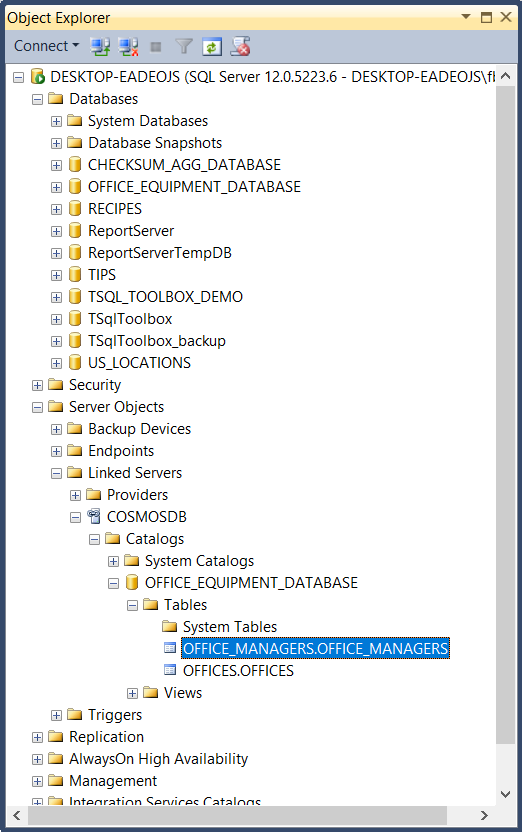 Also seen in the following screenshot:

The first derived table has a conventional SELECT clause, as shown in this code:

In the FROM clause, the OPENQUERY function supplies the basic set of rows, from the Azure Cosmos DB database, for the query itself. In the OPENQUERY function, the first parameter specifies the name of the linked server we want to use. Here, we’ll use COSMOSDB. The second parameter specifies a query string that we want to execute at the linked server. Lines 23 and 24 list the column names of the originally uploaded data, and we could easily place only the columns used in the SELECT clause in lines 20 and 21. At lines 23 and 24,

SELECT * would also work. However, this would include the following : 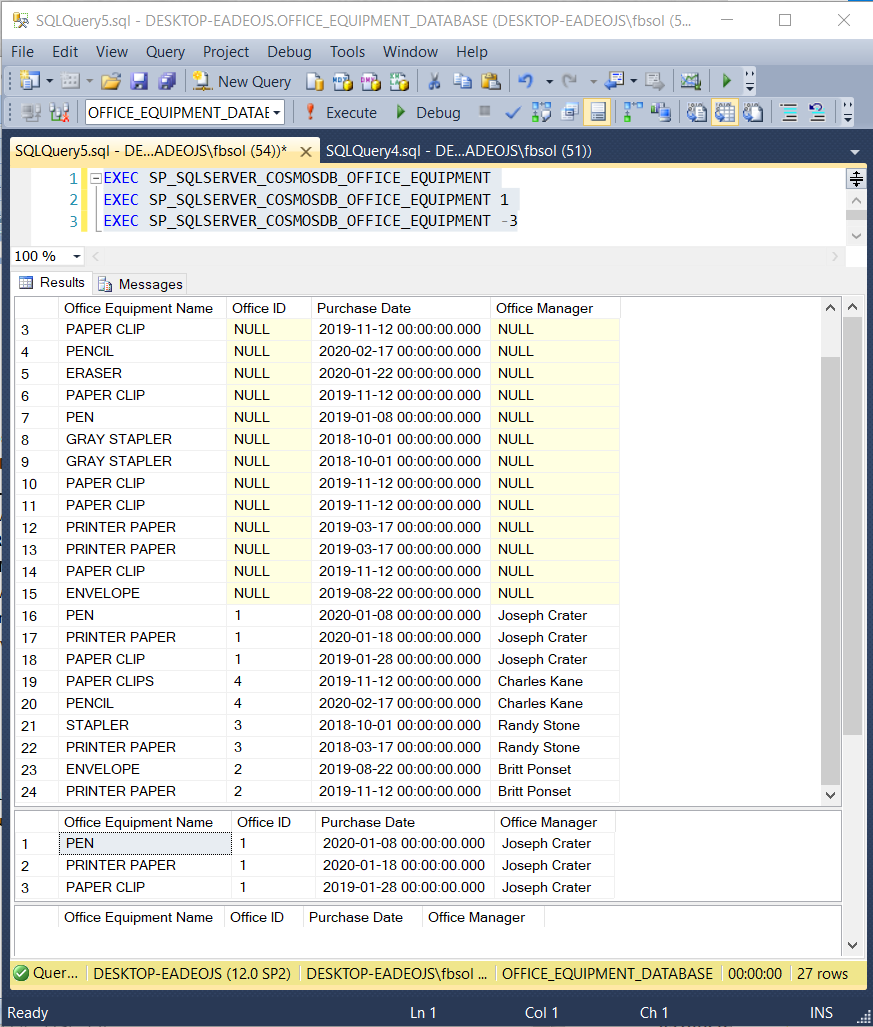 As the importance of cloud products grows, we need a way to integrate cloud data resources – including NoSQL resources like Azure Cosmos DB – with the SQL Server data products that we build. This article shows how to do it. 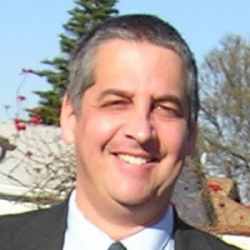 Frank Solomon
Frank Solomon started out building Microsoft stack products, and he gradually focused on SQL Server. Some years ago, he began a parallel shift to writing and technical writing. He wrote published articles, he blogs at Bit Vectors, and he co-wrote The SQL Workshop for Packt Publishing, with SQL Shack writer Prashanth Jayaram.

See more about Frank at LinkedIn.
Remove the non-standard characters from this address: fb} <s.author@gmail.com to reach him by email.