In this article, we are going to learn the IF function and CASE expressions that are very important control flow functions in MySQL. Moreover, I am including an overview of the IFNULL and NULL of functions.

To understand the function in detail, I have created a sample database named SchoolDB. I have created two tables named tblStudent and tblMarks in the SchoolDB database.

The following script creates the database and tables:

The following query inserts the database in tblStudent table:

Now, first, let us understand the IF function.

An overview of the IF() function

The IF function returns the value based on the condition specified within the function. The syntax of the IF function is the following:

The simple IF example

When the input string matches with each other, then print TRUE else, print FALSE. We can use the IF function in the SELECT statement. The query should be written as follows:

Print specific text in the output

For the demonstration, I have added two rows in the tblStudent with NULL values in grade and class columns. For the reporting purpose, instead of showing NULL, we want to show the Not available in the query output. 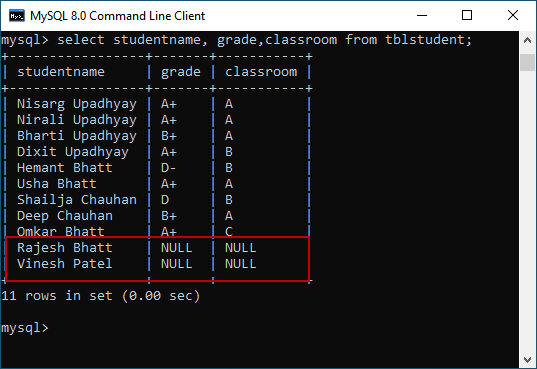 As you can see in the above image, the values of the grade and class column for Rajesh and Vinesh are NULL. Now, to display Not Available, the query should be written as follows:

The output is the following: 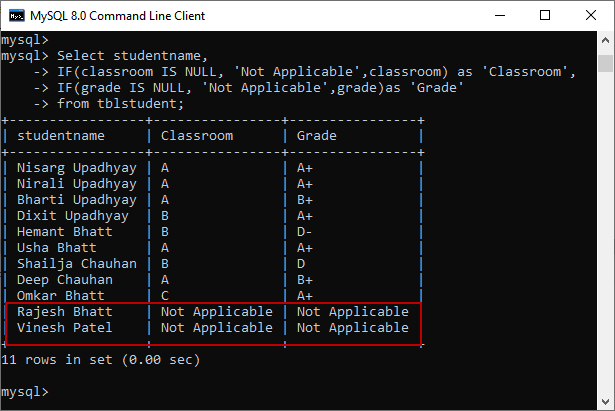 Use IF to display specific output

Suppose you want to display the name and grade based on the following condition:

The SELECT statement must be written as follows: 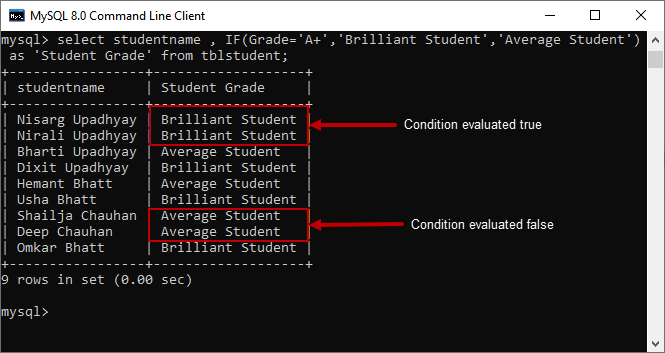 Use IF statement with the COUNT function

Suppose you want to get the total number of students with A+, B+, and D- grades. The condition is:

To generate the result set, we can use the IF function to evaluate the condition and then use the COUNT function to get the number of students with their respective grade. 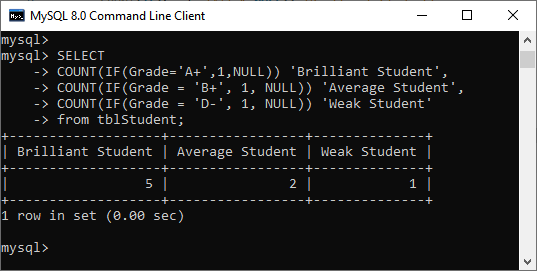 An overview of MySQL CASE expression

The CASE statement is one of the most common control flow expressions of MySQL. The case expression is used to implement the IF ELSE logic in the query. The CASE expression can be used in the SELECT, WHERE, and ORDER BY clause. There are two variants of the CASE expression.

The simple CASE expression matches the input with the values for equality and returns the corresponding result.

Following is the syntax of the simple CASE expression:

In the syntax, the case matches the expression with static_value_1, static_value_2 … and returns the corresponding output_1, output_2… values. If the input values do not match with any expression, then it returns the else_output. Let us understand the concept with an example.

In the case statement, we can specify an operator as well. I have specified an OR operator to ensure that the student whose grade is D+ or D should be considered a Weak student.

The query is the following: 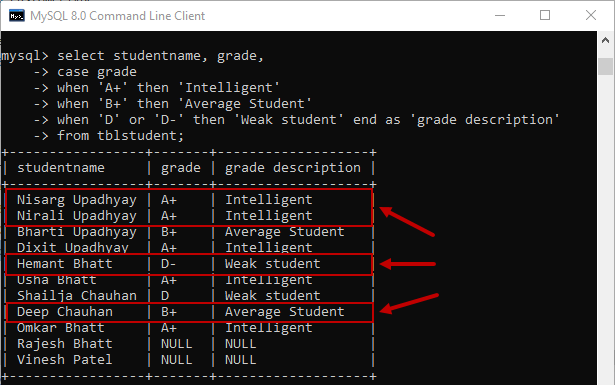 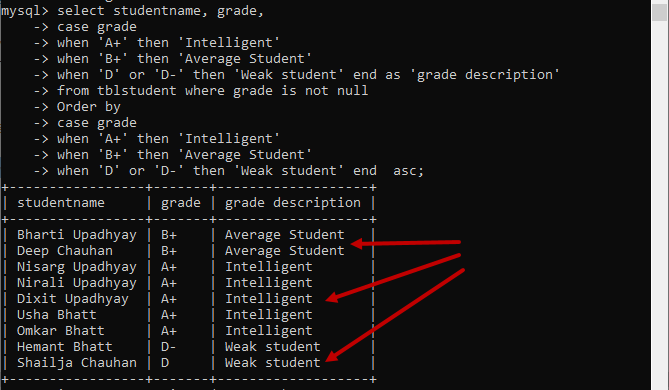 The searched case expression evaluates the expression specified in the WHEN clause and returns the corresponding value. The syntax is the following:

Examples of the searched case expression

Following are the examples of the searched case expression. 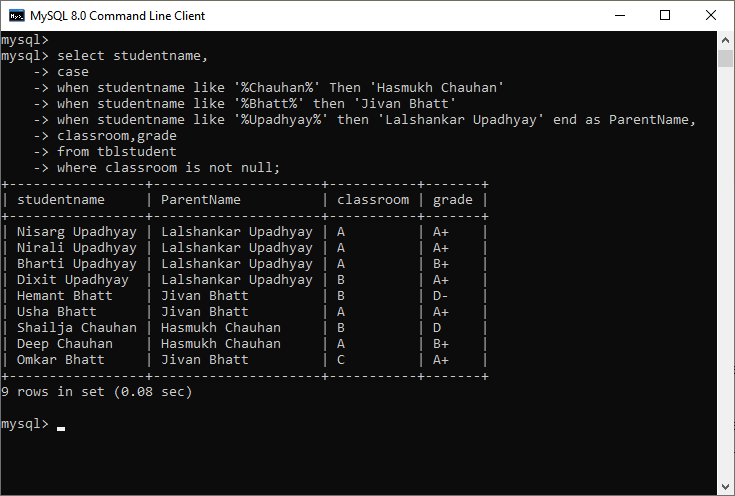 Suppose we want to populate the total subjects studied by the student. To populate the value of the subject, we are joining tblStudent and tblMarks using left join. The condition for the CASE expression is following:

The query is the following: 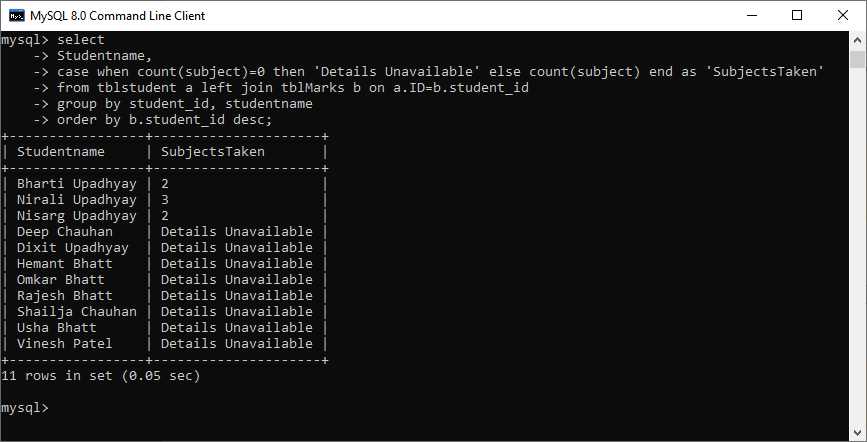 In the syntax, if the value of the expr1 is NULL then it returns expr2 else it returns a value of expr1.

Suppose when the query finds the NULL value for the grade column, we want to print details not available else we want to print the value of the column. This can be achieved by using the CASE expression, but we are using the IFNULL function. 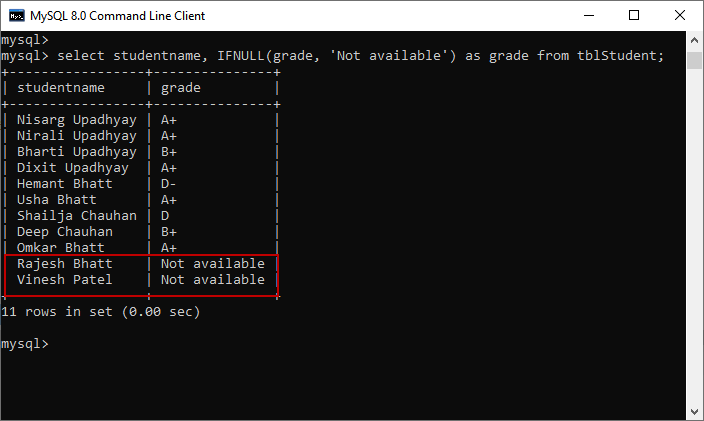 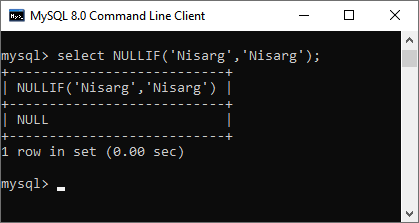 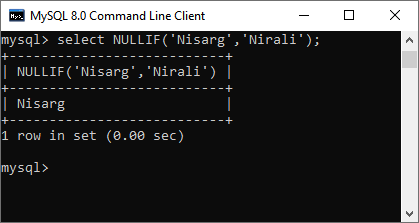 In this article, we have learned the most common control flow functions of MySQL. These functions can be used to manipulate the output generated by the SQL query. The CASE and IF are the conditional expressions and functions that are used to display the output based on the condition specified in the query.