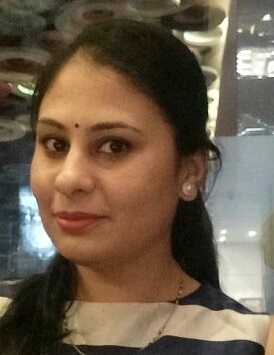 In this article, we will continue our journey to configuring a SQL Server AlwaysOn High availability configuration and failover nodes, by setting up iSCSI including an iSCSI initiator, setting up disk drives on notes, configuring our Quorum and finally installing the SQL Server cluster.

iSCSI is storage protocol which creates storage to the client node and domain controller. 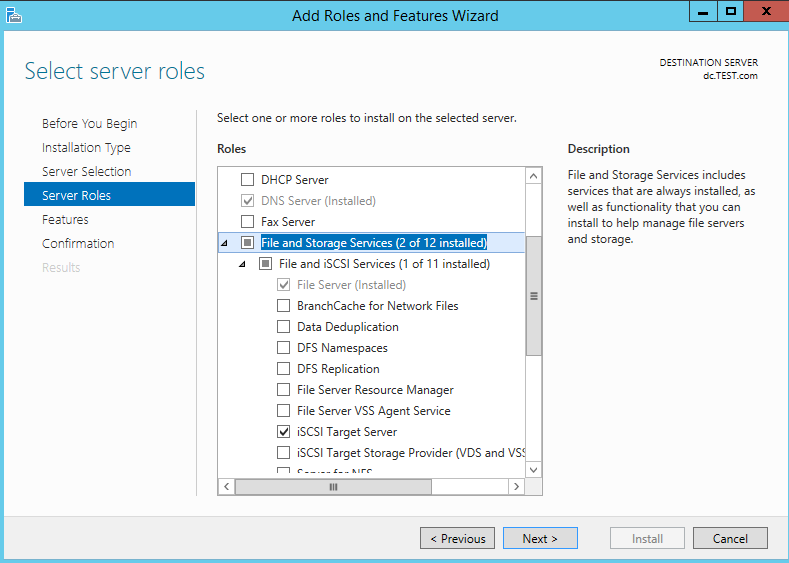 Click Next and Install. Once these features are installed, we will create iSCSI disk. We are creating these disks on the domain controller, but we can also create these disks on other nodes. If, however, the node server goes down, then the iSCSI configuration will also be down, so we will create a virtual disk configuration on the domain controller and other nodes which are configured as targets.

Once we installed the iSCSI feature, it will get back to the main iSCSI page as below.

As shown in the following fig. we will use the C drive to configure as the Target disk. Click Next 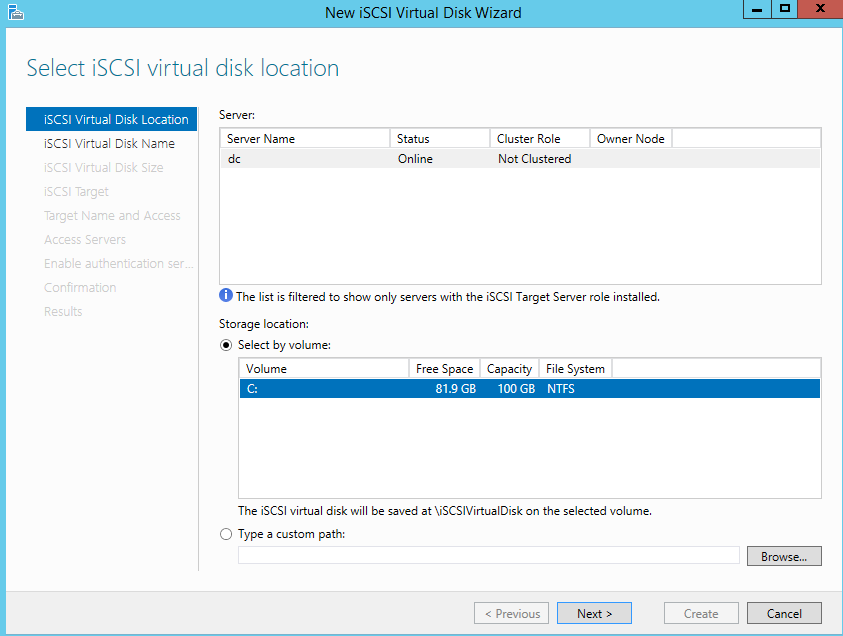 In the following screen, we need to specify the disk name. We can create a separate disk for Data and log. We will create a disk now for Data drive. we will specify a name like “data” and It will get saved in following the mentioned path.

In the following screen, we will specify a size for each disk. The total free space is 81.8 GB and out of that I am allocating 10 GB for Data for demo purpose. You can provide a size as per your local requirements. 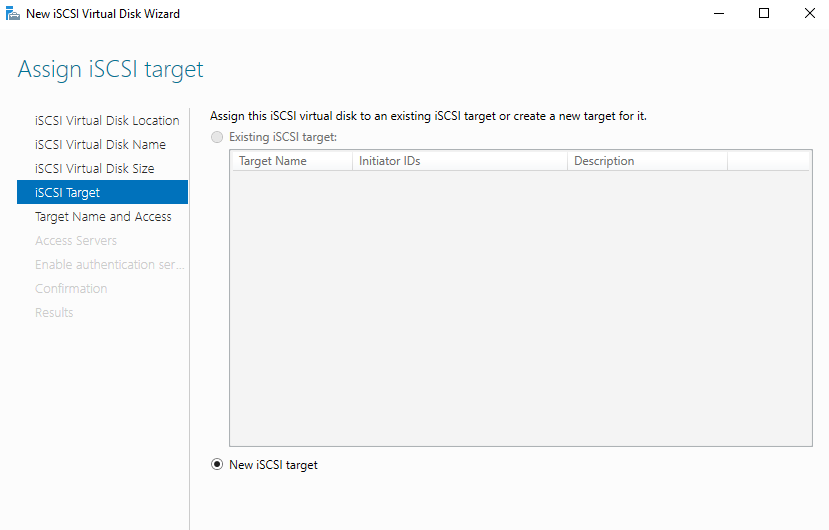 Specify the Target name and (optionally) a description and click Next 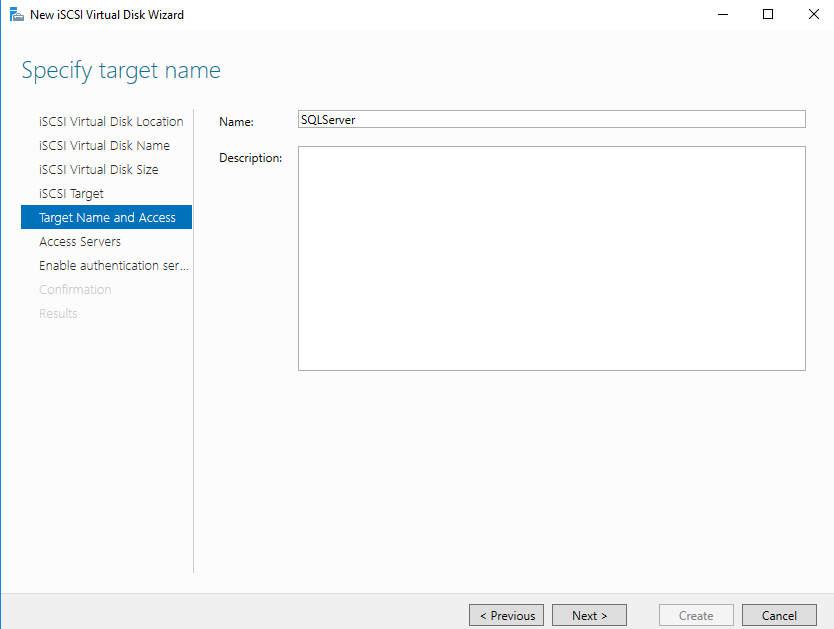 In the following screen, we will set-up an iSCSI initiator by assigning a private IP of a node server.

To add a node server to create the iSCSI initiator, click Add. Then when the Add iCSCI initiator dialog appears, we’ll need to select a method to identify the iSCSI initiator. To do this select Enter a value for a selected type, with Type as an IP and specify internal IP of node server SQL1 and SQL 2 in value field as shown in the following fig. 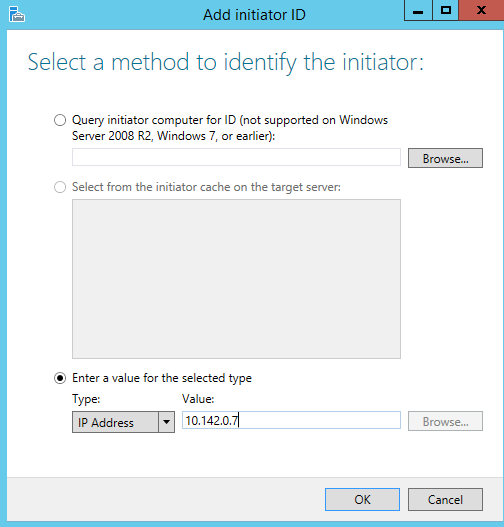 We can also verify disk path in C drive for the Data file, which we created while disk configuration step. Create the same iSCSI drive for a Log file, follow the same process to configure Log drive.

Setting up an iSCSI Initiator

Log in to each node and set-up the iSCSI Initiator in the server manager to start the iSCSI service. When we click iSCSI initiator, we will get pop-up message so click Yes to start. We need to repeat the same process to start the service on the other nodes as well.

Setting up Disk drives on Nodes

In this step, we will need to bring the iSCSI targets disk which we created previously online, log in to each node and Go to Disk Management setting as follows.

Right-click on the unallocated drive and click New Simple volume which will open the disk configure wizard. Specify a name of the drive, letter of a drive, space we need to allocate, and once configured, it will bring it online and it will be available for use. 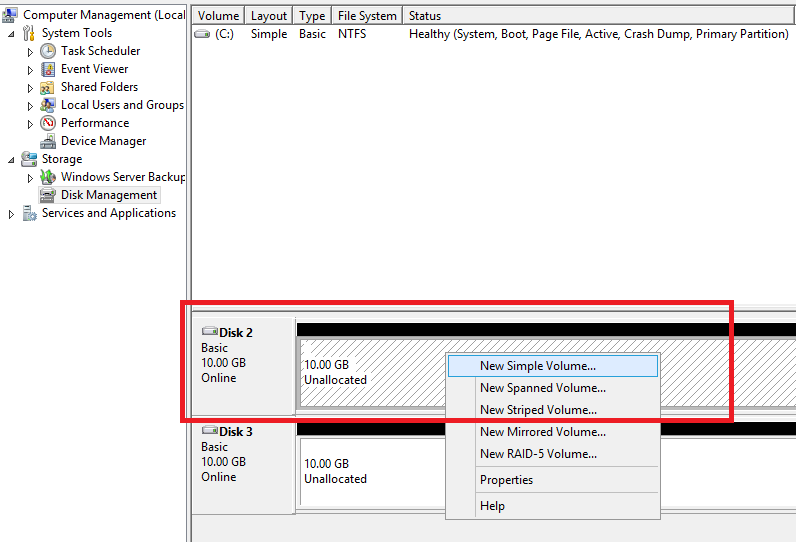 As we can see, the Data drive is brought online with 10 GB, the size which we specified in the iSCSI disk configuration. We will repeat the same process for other unallocated drives.

Quorum configuration is another important step in the cluster environment as it it allows the cluster to keep running even nodes may be down in the failover cluster.

In the failover cluster, we have multiple nodes. If we have a two-node cluster and both node servers are at different data centers locations, and the network is down in data centers, the nodes will not able to communicate with each other. When they are not able to communicate, each node will think the another node is not available, so each node will take responsibility and become the primary server

As both nodes simultaneously self-configure primary, this causes the cluster to split into two parts. As both nodes are working, it creates a data loss situation. This is commonly referred to as a “Split-brain” situation.

To prevent such a split-brain situation, the Quorum model which implements a voting system in cluster nodes of the cluster resource, was introduced.

There are four quorum models in the cluster

If a Quorum is not available, and some nodes are down, the cluster will not run, and it will go down. The quorum will keep running the cluster based on the majority of votes in the group. Let’s say we have three nodes in cluster SQL1, SQL2, and SQL3. This means we have an odd number of clusters and each node will get one vote. In case any node failed then we will have two votes. So out of three votes, the group got two votes which represents the majority. so the failover cluster will keep running even if one node failed.

Let’s say, we have a two-node cluster, SQL1 and SQL2, which is an even numbered node cluster, and one of the nodes, SQL2, fails. In this case, we will have only one vote for SQL1, which is not a majority to keep the cluster running, so in this case the disk will take precedence, providing one more vote to provide majority. So, in this case, SQL1 and the disk will together provide two votes which form the majority, so in this way the quorum will keep cluster running. This is referred to as Node and Disk Majority. 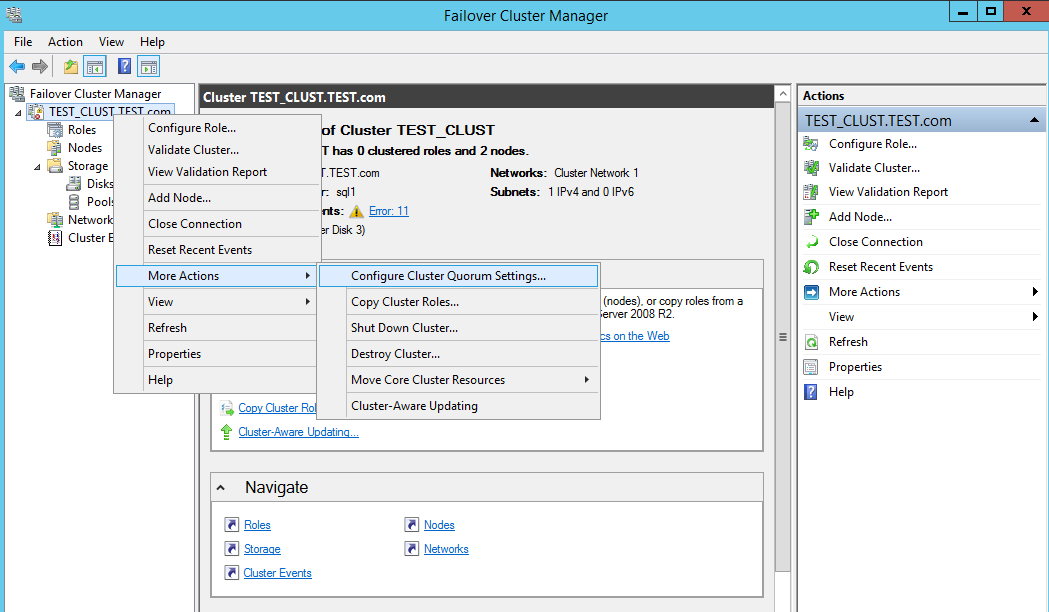 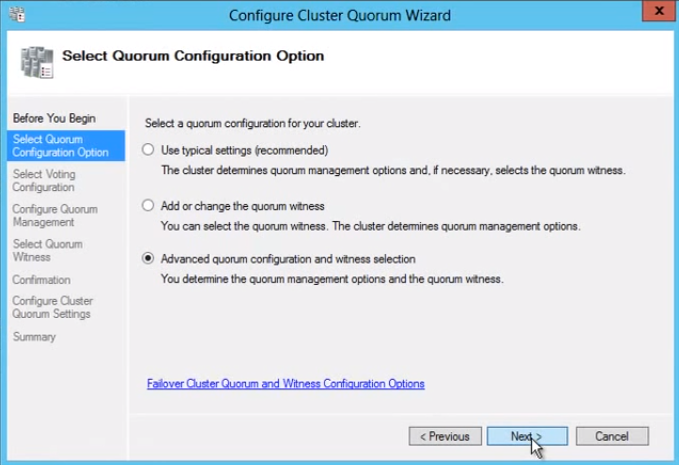 In the voting configuration, we need to select nodes which assign votes. 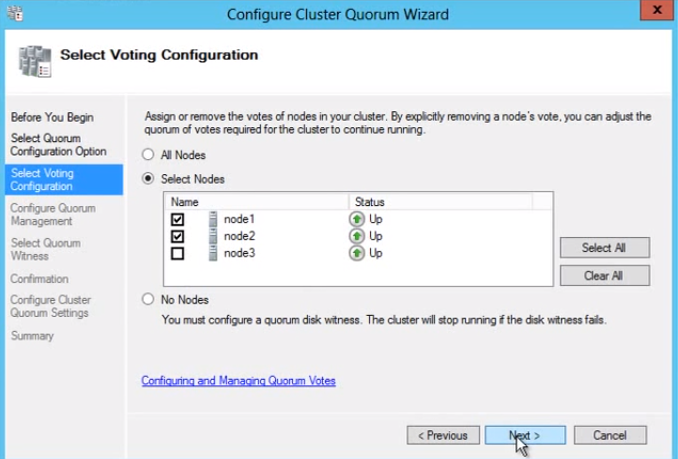 In the witness selection, we will select as a disk witness as we have even number of nodes, so the disk witness will participate in voting and provides vote majority. 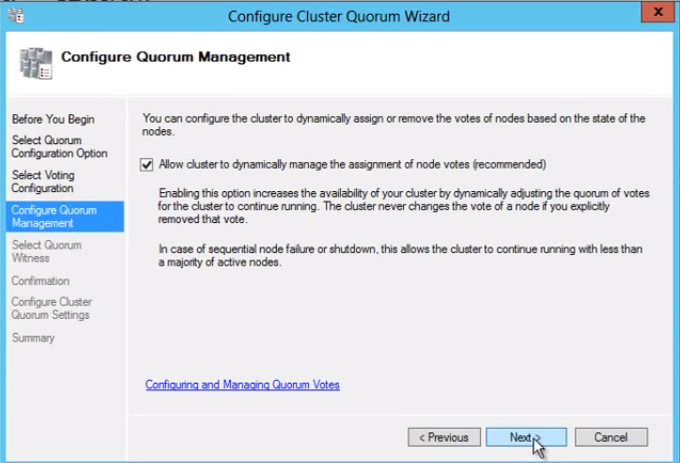 In this section, we will select disk a drive for the disk witness 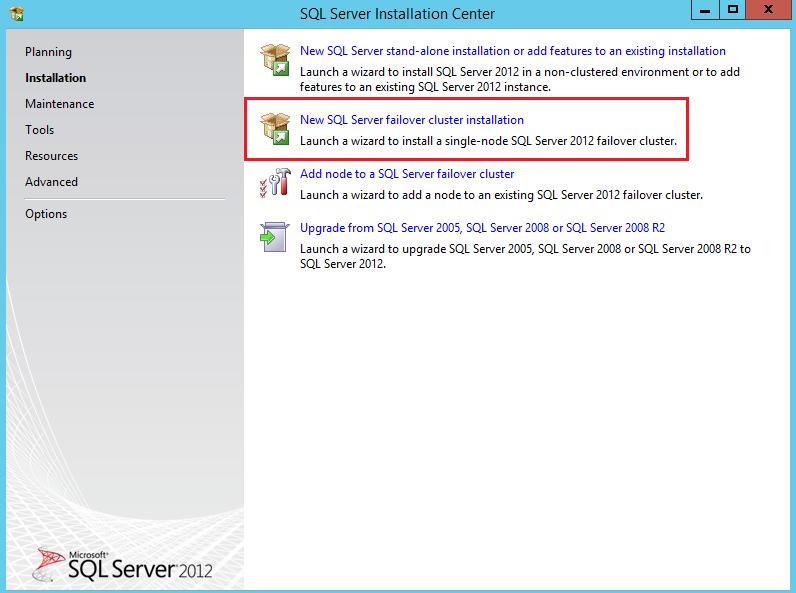 At the Install failover Cluster rules step, all operations completed, at this step, we may get an error for cluster service, WMI service not running so ensure those services are running on SQL nodes. 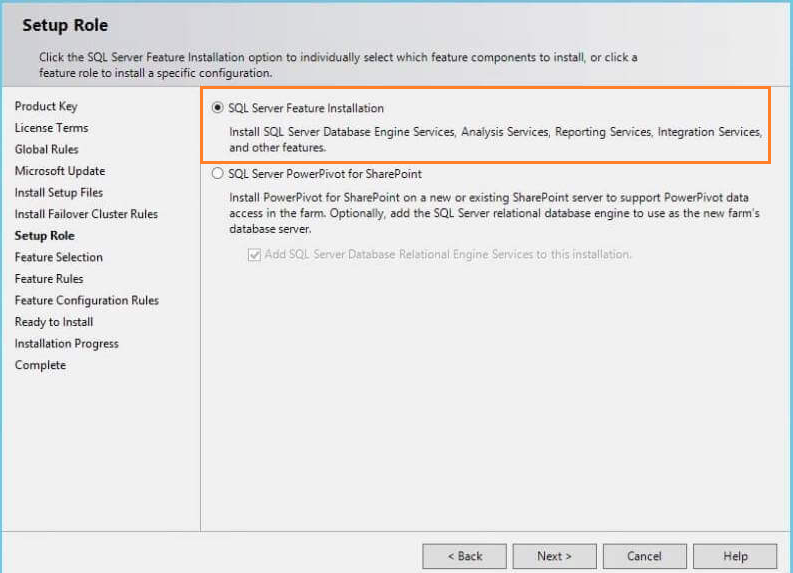 At the Feature selection step, we will select features as per our need and then click Next 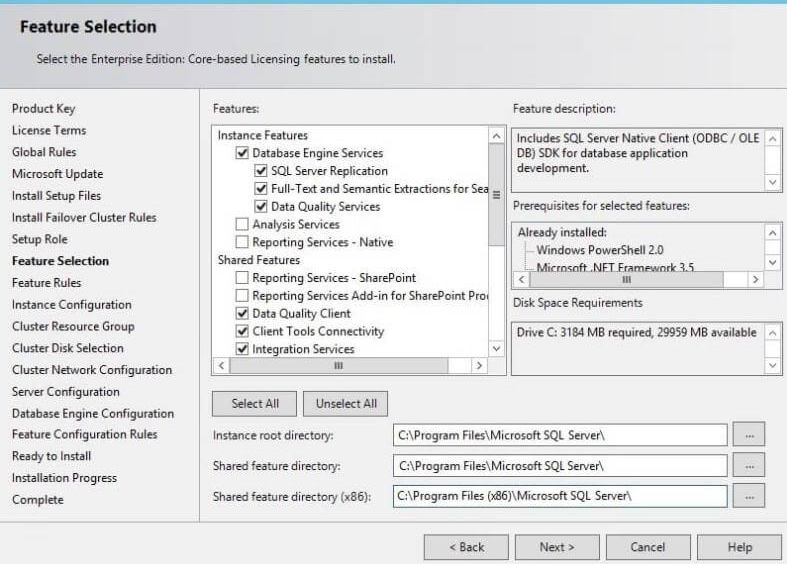 In the Instance Configuration step, a network name for the new SQL Server failover cluster is required 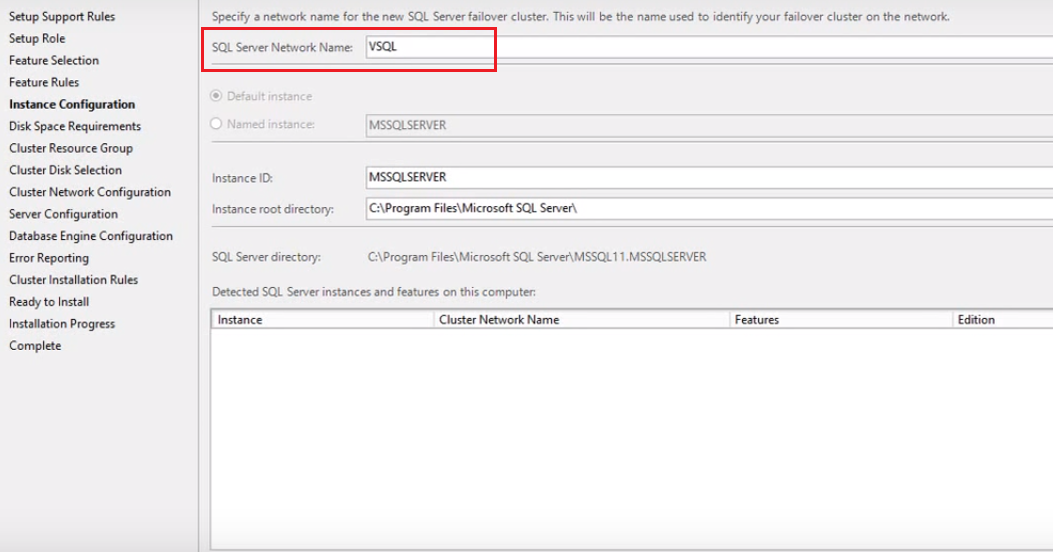 In the Disk space requirement step, the SQL server installer specifies disk drive size requirement. If enough space is not available, then it will suggest a minimum amount of drive space required to proceed with the installation.

In the Cluster Resource Group step, SQL Server resources placed on disk. We can specify an existing group name or specify a new group name.

In the Cluster Disk selection step, we need to select a shared disk which used in the SQL Server cluster group.

In the Server configuration step, we need to create a service account on the domain controller and allow administrator permission on each node.

In the Server configuration step, we need to select the collation

In the Database engine configuration step, we will select authentication mode either windows or Mixed mode. We have selected mixed mode authentication, specify the password and add current user as an administrator as below 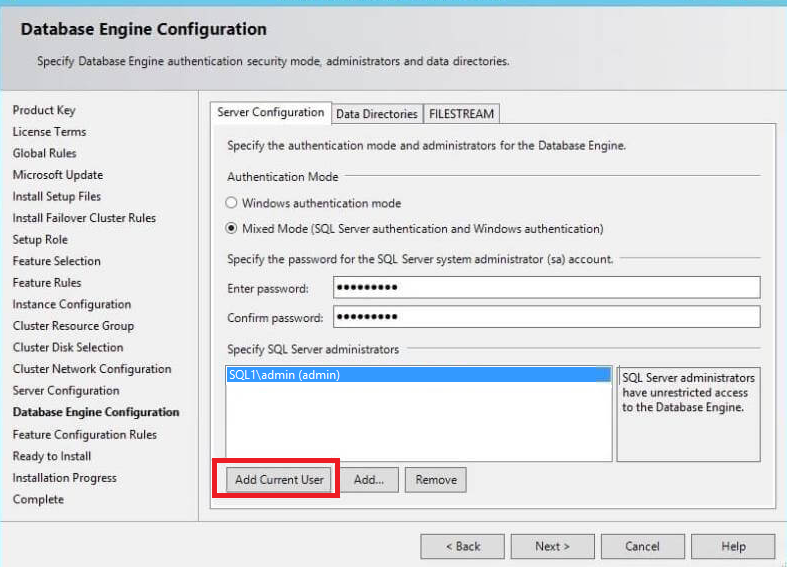 Click Next. The installation process will start. We need to follow the same process to install SQL Server cluster installation on other node servers. 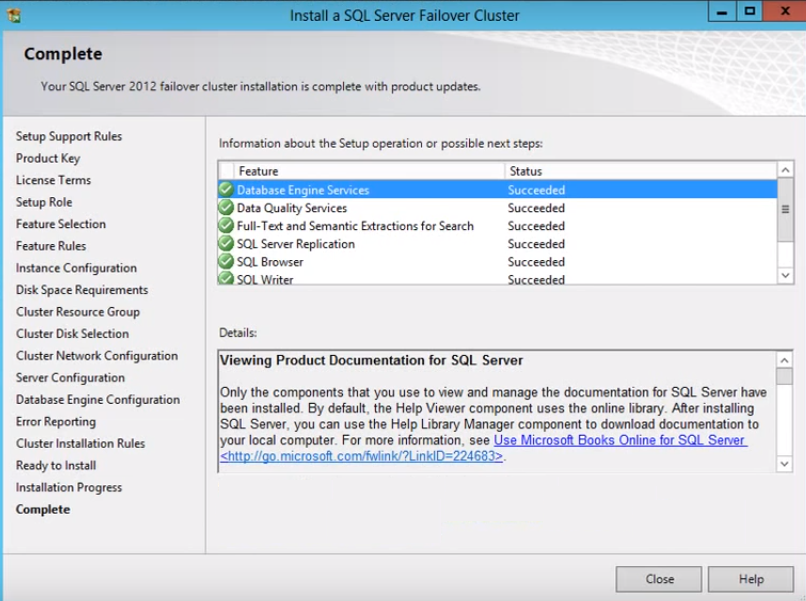 In this article, we walked thru the steps of setting up iSCSI including an iSCSI initiator, setting up disk drives on notes, configuring our Quorum and finally installing the SQL Server cluster. These steps will get us closer to creating our SQL Server AlwaysOn configuration

Priyanka Devre
I am From Bangalore, India. I work with SQL Server for Infosys in India. I work in High Availability AlwaysON, Disaster recovery, performance tuning, Back-up and restore, and  Cloud infrastructure.