SQL Server 2016 provides great enhancement capability features for troubleshooting purposes. Some of the important features are:

The Compare Showplan feature provides the ability to compare two sets of query execution plans. For example: we’ve had the situation where a user reported that the query is not working fine, while it was working fine for some time before.

To elaborate – SQL Server generates the optimized query execution plan based on several factors like number of rows, index, stats, memory, CPU etc. and it might be useful to compare 2 query execution plans to see what actually changed. Prior to SQL Server 2016, it was very difficult to perform this kind of comparison, but now we can use this feature to quickly figure out the changes.

Some of the potential benefits of the execution plan comparison can be:

How to use the Compare Showplan feature

For the demonstration purpose, I am using a sample database named WideWorldImporters. This is the SQL Server 2016 sample database. It can be downloaded from here.

The sample query is below:

In the next step, I’ll run the same query with a different order ID in another query window with its actual execution plan.

It opens a dialog box where we need to specify the location of the previously saved execution plan:

We can see both execution plans in the same screen with their properties:

By default, the comparison of both execution plans will be shown in top -bottom (horizontal) view. If we want to make it vertical, we’ll just right click on any Execution plan ➜ Toggle Splitter orientation

Both query execution plans are now adjacent to each other.

When two Showplans are compared, areas and operators of the plan, that do essentially the same thing, are highlighted in the same colour. This shows the operator that is essentially doing the same kind of operation in both plans.

As we can see in the example above, both execution plans are using clustered index seek operator.

We can compare each execution plan operator in both queries. Suppose we want to see and compare the properties of a clustered index seek; just clicking on it will make the change in the properties section.

We can also compare the different queries execution plan with the same Showplan compare. In the below example I am doing a comparison for two sets of queries, that are running Index scan and Index seek operators separately.

In the below query, I am filtering the records instead of retrieving the complete table:

Now, we can do the showplan comparison:

We can compare both execution plans performing different queries with properties of each operation and then tune our query\workload accordingly. This also helps to design a query in multiple ways and then compare both.

Comparing the execution plan between different versions\cardinality of SQL Server

In my company, we used to upgrade the database to a higher SQL Server version (with better hardware too) but users complained that the query is responding slowly after the upgrade.

We can save the critical, or top resource consuming queries execution plan of the queries before the upgrade and after the upgrade to SQL Server 2016. We can compare the properties of both.

How to improve the query performance with the Compare Showplan

The query that I am using here for the demo is:

The execution plan for the query is :

The execution plan is now showing the index recommendation with overall impact of 72%. Therefore, I created the missing index as per recommendation:

The execution plan for the same query has been generated and the comparison is as follows: 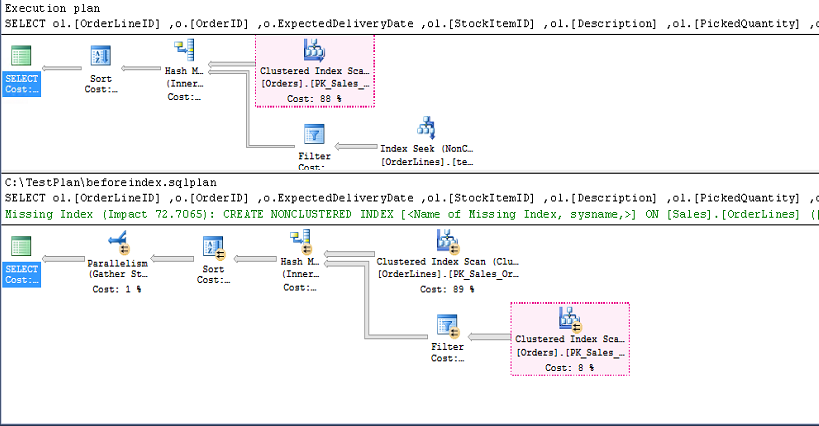 After the index creation, query is using the index seek instead of the clustered scan that has a good performance impact in case there is a large number of rows.

We can see the overall cost for the clustered index scan is now 8% compared to 88% after creating the recommended index. Furthermore, we can see the impact on using the properties where CPU cost is reduced from 0.307708 to 0.153854

We have seen, in the examples above, that the similar operators are highlighted from both execution plans. We can control this behaviour using the Highlight similar operations option. By default, it is turned on. 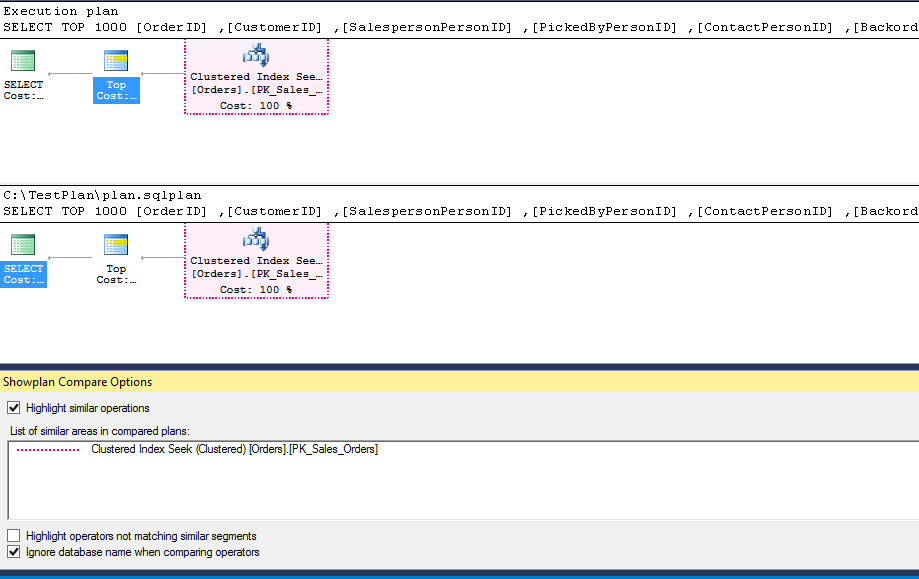 It shows the list of similar operators in the list of a similar area in a compared plan section.

If we do not want to see the similar operator highlighted, we can simply uncheck the box: 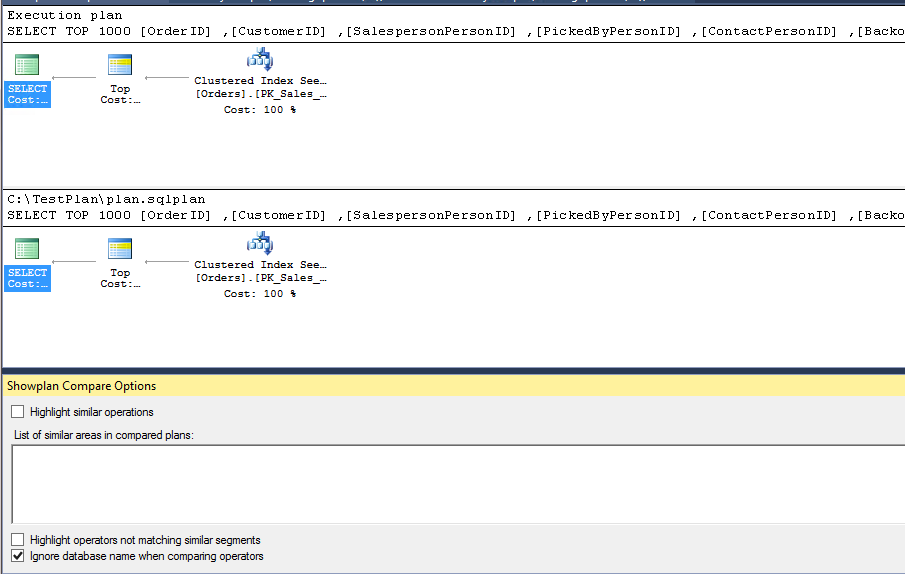 If we want to highlight operators that are not matching similar segments, we can check the box as shown below:

The Compare Showplan is a useful feature, introduced in SQL Server 2016, which can help in troubleshooting real world scenarios, and in developing queries as well.