In this article, in the data science: data analysis and transformation series, we’ll be talking about information entropy.

Information entropy was defined by Claude E. Shannon in his information theory. Shannon’s goal was to quantify the amount of information in a variable. Nowadays the information theory as a special branch of applied mathematics is used in many places, such as computer science, electrical engineering, and more.

Information is actually a surprise. If you are surprised when you hear or read something, this means that you didn’t know that, that you actually learned something new, and this something new is a piece of information. So how does this connect to a variable in your dataset?

Intuitively, you can imagine that the information of a variable is connected with its variability. If a variable is a constant, where all cases occupy the same single state, you cannot be surprised with a value of any single case. Imagine that you have a group of attendees in a classroom. You know a bit about their education. Let’s start with an example where you split the attendees into two groups by the education: low and high. In one class, 95% of attendees have high and 5% low education. You ask a random attendee about her or his actual education level. You would expect that it would be high. You would be surprised only in 5% of cases, learning that for that particular attendee is actually low. Now imagine that you have a 50% – 50% case. The knowledge about this distribution does not help you much – whatever state you would expect; you would be surprised half of the times.

Now imagine that you have previous knowledge about the attendees’ education classified into three distinct classes: low, medium, and high. With a distribution 33% – 33% – 33%, you would be surprised about some person’s education in two thirds of the cases. With any other distribution, for example 25% – 50% – 25%, you would be surprised fewer times. For this specific case, you would expect medium level, and half of the times you would learn that the level of the person you are talking with is not medium, being either low or high.

Of course, the question is how to measure this information. You can try to measure the spread of the variable. For example, for ordinal variables stored as integers, you could pretend that the variables are continuous, and you could use standard deviation as a measure. In order to compare the spread of two different variables, you could use the relative variability, of the coefficient of variation, defined as standard deviation divided by the mean:

Let me start by preparing the demo data for this article with T-SQL. Note that I created a calculated variable GenMar by simply concatenating the Gender and the MaritalStatus variables into on that will have four distinct stated (FM, FS, MM, MS).

Now I will switch to R. Here is the code that reads the data from the table I just created.

The following R code calculates the frequencies, creates a histogram, and calculates the mean, standard deviation, and coefficient of variation for the NumberCarsOwned variable. Note that I use the paste() function to concatenate the strings with the calculated values.

Here is the histogram for this variable. 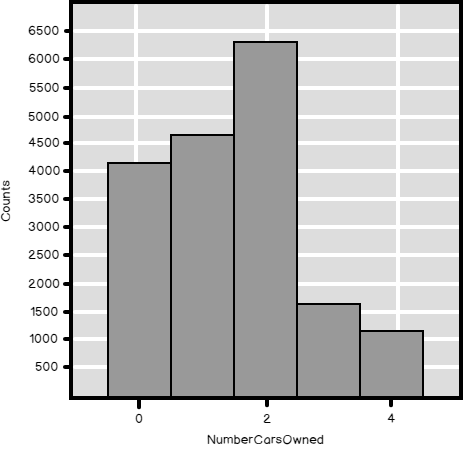 And here are the numerical results.

Let me do the same calculations for the BikeBuyer variable.

You can see that although the standard deviation for the BikeBuyer is lower than for the NumberCarsOwned, the relative variability is higher.

Now, what about the categorical, or nominal variables? Of course, you cannot use the calculations that are intended for the continuous variables. Time to calculate the information entropy.

Shannon defined the information of a particular state as a probability multiplied by the logarithm with base two of the probability:

The probability can take a value in an interval between 0 and 1. The logarithm function returns negative values for the interval between zero and one. This is why the negative sign, or the multiplication by -1, is added.

What is the maximal possible entropy for a specific number of states, let’s say three? Let’s do the calculation.

From logarithm formulas, we know that we can express

Therefore, we can develop the equation for the maximal possible information entropy:

You can see that the maximal possible information entropy of a variable with n states is logarithm base two of this number n.

Calculating the entropy in T-SQL

Let me start with a calculation of the maximal possible information entropy for a different number of states.

From the results, you can see that this variable has a high relative entropy.

Calculating the information entropy in Python

For a start, let’s import all of the libraries needed and read the data.

For the calculation of the information entropy, you can use the scipy.stat.entropy() function. This function need the probabilities as the input. Therefore, I defined my own function that calculates the entropy with a single argument – the name of the variable, and then in the body I calculate the state probabilities and the entropy of the variable with the scipy.stats.entropy() function. Then I calculate the information entropy of the discrete variables I have in my dataset.

Finally, let’s do the calculation of the information entropy also in R. But before that, let me show you the distribution and the histogram for the GenMar calculated variable.

Here are the numerical and graphical results. 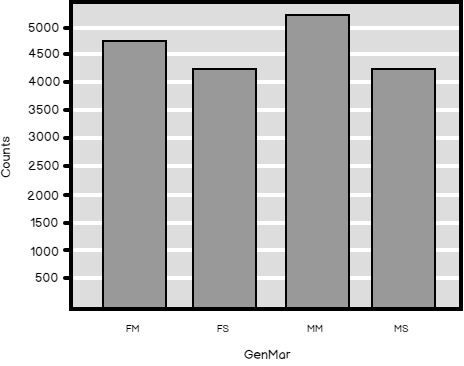 In R, I will use the DescTools Entropy() function. This function expects the absolute frequencies as the input. Here you can see the code.

And here are the last results in this article.

This concludes my article on information entropy. After exhausting articles on working with discrete variables, it looks like it would be time for switching to continuous ones. But before that, I want to explain something else. In some of my previous articles, I tacitly added calculated variables to a dataset. Therefore, I want to introduce some of the operations on the whole datasets.