You might find the T-SQL GROUPING SETS I described in my previous data science article a bit complex. However, I am not done with it yet. I will show additional possibilities in this article. But before you give up on reading the article, let me tell you that I will also show a way how to make R code simpler with help of the dplyr package. Finally, I will also show some a bit more advanced techniques of aggregations in Python pandas data frame.

The previous query can be shortened with the ROLLUP clause. Look at the following query.

There is another shortcut command for the GROUPING SETS – the CUBE command. This command creates groups for all possible combinations of columns. Look at the following query. 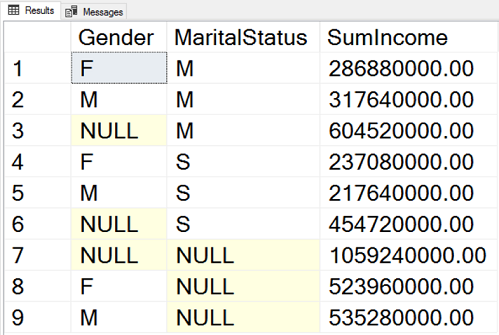 I can write the previous query in another way. Note that the GROUPING SETS clause says “sets” in plural. So far, I defined only one set in the clause. Now take a loot at the following query.

The query has two sets defined: grouping over Gender and over the whole rowset, and then, in the ROLLUP clause, grouping over MaritalStatus and over the whole rowset. The actual grouping is over the cartesian product of all sets in the GROUPING SETS clause. Therefore, the previous query calculates the aggregates over Gender and MaritaStatus, the hyper-aggregates over Gender only and over MaritalStatus only, and the hyper-aggregate over the complete input rowset. If you add more columns in each set, the number of grouping combinations raises very quickly, and it becomes very hard to decipher what the query actually does. Therefore, I would recommend you to use this advanced way of defining the GROUPING SETS clause very carefully.

The GROUPING() function accepts a single column as an argument and returns 1 if the NULL in the column is because it is a hyper-aggregate when the column value is not applicable, and 0 otherwise. For example, in the third row of the output, you can see that this is the aggregate over the MaritalStatus only, where Gender makes no sense, and the GROUPING(Gender) returns 1. If you read my previous article, you probably already know this function. I introduced it there, together with the problem is solves.

The GROUPING_ID() function is another solution for the same problem. It accepts both columns as the argument and returns an integer bitmap for the hyper-aggregates fo these two columns. Look at the last row in the output. The GROUPING() function returs in the first two columns values 0 and 1. Let’s write them thether as a bitmap and get 01. Now let’s calculate the integer of the bitmap: 1×20 + 0x21 = 1. Ths means that the MaritalStatus NULL is there because this is a hyper-aggregate over the Gender only. Now chect the sevents row. The bitmap calulation to integer is: 1×20 + 0x21 = 3. So this is the hyper-aggregate where none of the two inpuc columns are applicable, the hyper-aggregate over the whole rowset.

After the complex GROUPING SETS clause, I guess you will appreciate the simplicity of the following R code. Let me quickly read the data from SQL Server in R.

I am going to install the dplyr package. This is a very popular package for data manipulation in r. It brings simple and concise syntax. Let me install it and load it.

The first function to introduce from the dplyr package is the glimpse() function. If returns a brief overview of the variables in the data frame. Here is the call of that function.

Bellow is a narrowed result.

The dplyr package brings functions that allow you to manipulate the data with the syntax that briefly resembles the T-SQL SELECT statement. The select() function allows you to define the projection on the dataset, to select specific columns only. The following code uses the head() basic R function to show the first six rows. Then the second line uses the dplyr select() function to select only the columns from CustomerKey to TotalCars. The third line selects only columns with the word “Children” in the name. The fourth line selects only columns with the name that starts with letter “T”.

For the sake of brevity, I am showing the results of the last line only.

The filter() function allows you to filter the data similarly like the T-SQL WHERE clause. Look at the following two examples.

Again, I am showing the results of the last command only.

The dplyr package also defines the very useful pipe operator, written as %>%. It allows you to chain the commands. The output of one command is the input for the following function. The following code is equivalent to the previous one, just that it uses the pipe operator.

The distinct() function work similarly like the T-SQL DISTINCT clause. The following code uses it.

You can also use the dplyr package for sampling the rows. The sample_n() function allows you to select n random rows with replacement and without replacement, as the following code shows.

Note that when sampling with replacement, the same row can come in the sample multiple times. Also, note that the sampling is random; therefore, the next time you execute this code you will probably get different results.

The arrange() function allows you to reorder the data frame, similarly to the T-SQL OREDER BY clause. Again, for the sake of brevity, I am not showing the results for the following code.

The mutate() function allows you to add calculated columns to the data frame, like the following code shows.

Finally, let’s do the aggregations, like the title of this article promises. You can use the summarise() function for that task. For example, the following line of code calculates the average value for the Income variable.

You can also calculates aggregates in groups with the group_by() function.

The top_n() function works similarly to the TOP T-SQL clause. Look at the following code.

I am calling the top_n() function twice, to calculate the top 3 countries by average income and the bottom two. Note that the order of the calculation is defined by the sign of the number of rows parameter. In the first call, 3 means the top 3 descending, and in the second call, 2 means top two in ascending order. Here is the result of the previous code.

Finally, you can store the results of the dplyr functions in a normal data frame. The following code creates a new data frame and then shows the data graphically. 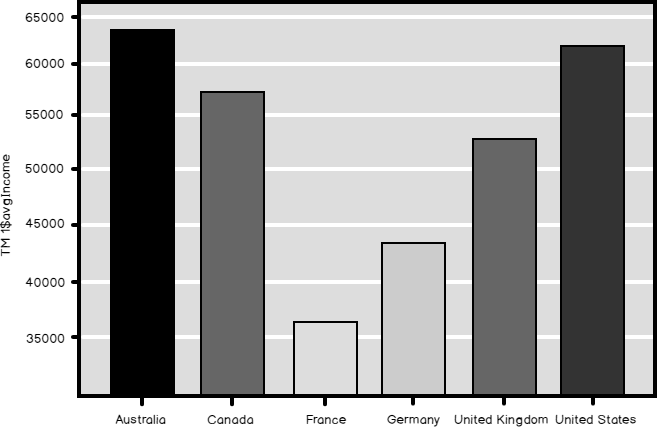 Time to switch to Python. Again, I need to start with importing the necessary libraries and reading the data.

From the previous article, you probably remember the describe() function. The following code uses it to calculate the descriptive statistics for the Income variable over countries.

Here is an abbreviated result.

You can use the unstack() function to get a tabular result:

Here is the narrowed tabular result.

You might dislike the form of the previous result because the names of the columns are written in two different rows. You might want to flatten the names to a single word for a column. You can use the numpy ravel() function to latten the array of the column names and then concatenate them to a single name, like the following code shows.

You can also try to execute the commented code to get the understanding how the ravel() function works step by step. Anyway, here is the final result.

For a nice end, let me show you the results also graphically.

And here is the graph. 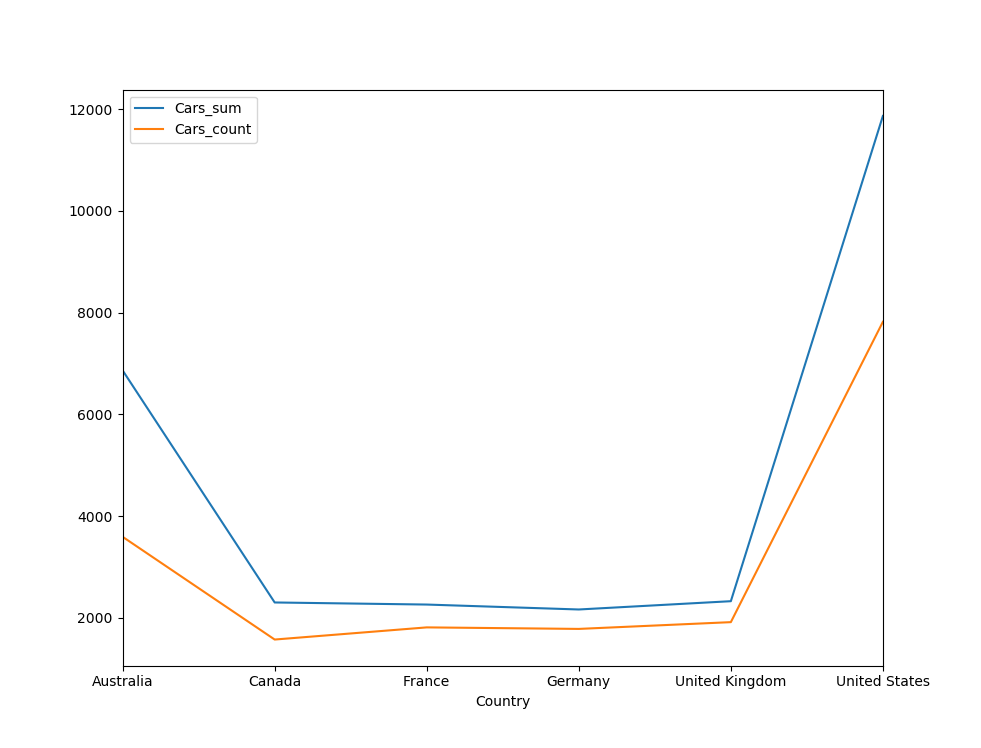 I will finish with aggregations in this data science series for now. However, I am not done with data preparation yet. You will learn about other problems and solutions in the forthcoming data science articles.