In an era of remote storage and retrieval of data, including the cloud, data security plays a vital role, especially since it’s vulnerable during the transit. Situations like database backup or copy from or to the cloud, there is always a risk of data exposure to outside world lurking around one corner or the other. We have seen a noticeable surge in the technologies around protection and security of data from the world full of unsafe hands. Efforts are being made to protect data at a very granular level of the encryption hierarchy. Protection of business data cannot be stressed upon more.

One way of inching towards the more secure transmission of data is to enable Always Encrypted on the database. We’ll look into the various options we have, including enabling this at granular levels; we’ll look at enabling this at the column level.

There are several ways to configure the Always Encrypted feature:

Overview of the Always Encrypted Feature

Always Encrypted feature is a handshake mechanism used to encrypt and decrypt data. Encryption here is achieved using certificates, and can be done only by users with access to the relevant certificates. To make a database column Always Encrypted, you must specify the encryption algorithm and the cryptographic keys that are used to protect the data. Always Encrypted needs two keys:

In an age of centralized or remote management of data, it is important that the enterprises add an abstraction layer to their data. This way, those who manage the data on a day-to-day basis, such as database administrators are not able to view or use the data. At the same time, those in the enterprise who own the data, have complete access to the data, even though they may not necessarily manage it.

Apart from being the layer of abstraction, Always Encrypted also ensures encryption of data during transit, thereby protecting it from sniffers—typically those involved in attacks such as Man in the Middle.

To set up Always Encrypted, we need to generate the following:

However, not all of these are supported in T-SQL. Therefore, we need to use client-side tools, such as the SQL Server Management Studio or PowerShell to accomplish these tasks.

The above steps create a self-signed certificate and load it into the store. 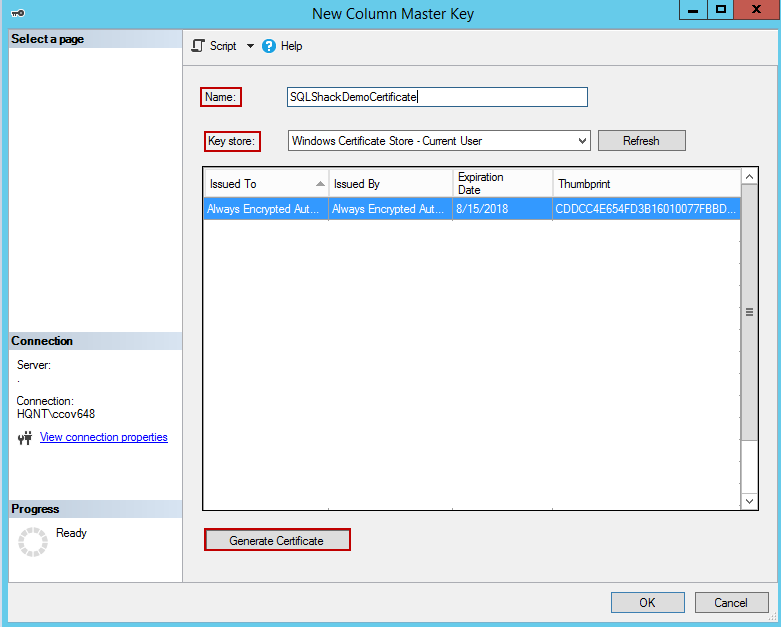 Now, we need to distribute the certificate to all the client machines by using the Export and Import Certificates method.

We have successfully completed the configuration. Now, it’s time to apply the encryption settings to the column(s) by browsing the table and selecting the needed column(s) for encryption.

In order to decrypt the column, the following settings should be enabled in the SSMS client

The first step is to create a self-signed certificate with all the necessary information related to loading it into the certificate store of the current user context.

After downloading, create the function New-SelfsignedCertificateEx and call the function with the available parameters as shown below 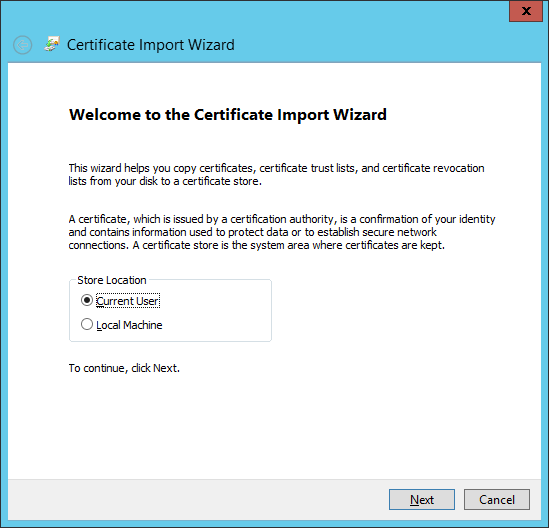 The SqlServer module is an external package. Hence this has to be installed as a separate package. You can download and install SqlServer in very few simple steps.

That’s it; we have our Column Master Key now.

It’s time to integrate the columns with the Always Encrypted feature now. In the following steps, the column, name, and the database databases are encrypted using SQLShack_CEK_1 Column Encryption Key.

Did that succeed? Let’s now try connecting, using a connection string set to use the Column Encryption Setting.

This section talks about using T-SQL to create Column Master Key and Column Encryption Key along with creating encrypted columns in a table. The following are the three tables that are very important to get the required key information to create Master and Column encryption keys.

To get the provider name and the key path details, query the system view sys.column_master_keys

In this article, we saw various ways to configure and enable the Always Encryption feature. Since data to the database flows from various sources, this feature gives an added security to the data and safeguards the same from various potential risks.

However, before proceeding with this, I recommend that all of the implications are fully understood, and the feature details are known.