SQL Server Transparent Data Encryption, also known as TDE, is a “data at rest” encryption mechanism that is introduced in SQL Server 2008 as an Enterprise Edition feature. TDE is used to perform a real-time I/O encryption for the SQL Server database data, log, backup and snapshot physical files, rather than encrypting the data itself, using either Advanced Encryption Standard (AES) or Triple DES (3DES) encryption.

The TDE encryption process, as the name indicates, is transparent from the users and requires no change from the application side. Transparent Data Encryption encrypts the physical files at the page level before writing the pages to the disk, and decrypts the files when the pages are read into the memory.

TDE_Test is a user database that contains a critical financial data, and on a monthly basis, the backup of that database is sent to the company headquarter office to verify the database backup. So that, we need to make sure that if the backup is stolen or missed, no one can browse its data. To achieve that, the database physical files should be encrypted using the SQL Server Transparent Data Encryption.

To make sure that the certificate is created successfully, you can query the sys.certificate system object for all certificates that are created under the current SQL Server instance as below:

The result will show us that the TDE_AVG certificate is created successfully, encrypted by the master key and valid for one year only:

The Certificate is ready now, so we will start working at the database side. We will use the CREATE DATABASE ENCRYPTION KEY T-SQL command to create the TDE_Test database encryption key that is encrypted by the TDE_AVG certificate created previously, specifying the encryption algorithm, which is the Advanced Encryption Standard (AES) in our case with a 128 bit key length as follows:

The last step in configuring the TDE is to turn on the TDE encryption on the TDE_Test database using ALTER DATABASE … SET ENCRYPTION ON T-SQL command below:

That is it! The Transparent Data Encryption is configured completely on the TDE_Test database. The sys.dm_database_encryption_keys DMV can be used to list all databases with TDE enabled on the databases:

The result shows that the TDE is enabled on the TDE_Test database, and the value 3 for the database encryption state means that the database is completely Encrypted. But what about the tempdb? We have not configured the TDE on that database!

If you encrypt any user database using the Transparent Data Encryption, the physical files of the tempdb will be encrypted automatically, as it may contain data from the TDE enabled user database temporarily, while using temporary tables or cursors. In this way, we will maintain full protection for our data using the TDE feature. The operative point is that, the TDE encryption on the tempdb is transparent from that database users and will have a minimal performance impact on the current SQL instance.

As a best practice, it is better to back up the TDE certificate and the private key associated with that certificate after enabling the TDE on a database. In this way, you will be able to restore the database backup files or attach the database data files on another SQL Server instance. The backup can be performed by running the below BACKUP CERTIFICATE T-SQL command, which will backup both the certificate itself and its private key, providing a complex password to encrypt that private key as below:

The generated backup files can be viewed by browsing the path provided in the script or the SQL instance DATA path by default if you do not provide the path as follows:

At this point, the TDE_Test database is encrypted at the DB41VS SQL Server that acts as the primary replica in the AG40VS Always On Availability Group.

To do that, we should first create a master key on the secondary server that is encrypted by a complex password, using the CREATE MASTER KEY T-SQL command below:

You have the choice to use the same password for the previous master key or use a new password, as the master key is used to encrypt the certificate not the database itself in order to keep it protected. In all cases, the key itself will be different due to how the key generation process is performed.

The next step is to copy the certificate and the private key backup files generated previously from the DB41VS primary replica to the DB42VS secondary server. You can keep it in the default data folder on the secondary serve, or in a custom folder where you should provide that bath in the CREATE CERTIFICATE T-SQL statement. The private key of the certificate should be decrypted by the same password that was used to encrypt it when the backup was created:

On the primary replica we will add the database to the Availability Group using the ALTER AVAILABILITY GROUP… ADD DATABASE T-SQL command as follows: 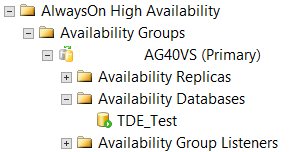 Once the backup files are copied to the secondary server, we will restore the full backup and the transaction log backup on that server using WITH NORECOVERY option:

At the secondary replica side, we need to join the database to the availability group using the ALTER AVAILABILITY GROUP T-SQL command below: 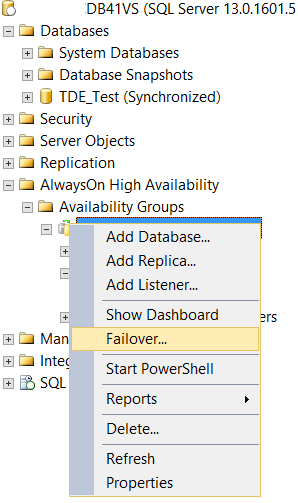 Go through this simple wizard and failover the AG40VS Availability Group to the DB42VS SQL server. The DB42VS is the primary replica now with no issue. You can browse the database and run few SELECT statements to make sure that it is working fine:

Securing and encrypting sensitive data stored in our databases is very important, especially the databases that store the organization’s financial data and customers’ confidential information. SQL Server Transparent Data Encryption is an encryption feature that provides encryption on the database file level, as it encrypts the database data, logs, backup and snapshot files. Also, the database should be added to a high availability and disaster recovery site in order to be available and online for the users all the time.

Always On Availability Groups is the best high availability and disaster recovery choice for us. Adding a database that is encrypted by the TDE feature to the Availability Group by the wizard is not supported. In this article, we described how to do that manually step by step.