In a typical database, we have multi lines or page SQL statements in a view, SQL statement or the stored procedure. Also, multiple developers change the T-SQL, and it becomes difficult to track who altered the code and for what reason.

The SQL comments in a statement help you to read and maintain the SQL scripts easily. For example, you can put a comment that showcases the purpose of the statement, such as adding a specific query hint or modifying script logic. SQL Server does not execute these comments, and it does not affect query behavior as well.

Another purpose of the SQL comment is to disable the execution of a specific code. For example, suppose you do not want to execute the where block condition in a select statement. Therefore, put a comment on where the block and SQL Server skips execution.

You can add comments between the keywords, parameters at the beginning or end of a statement. SQL Comments can be added in the following formats.

The single line SQL comment uses two dashes (–) in SQL Server. Once you add the two dashes, SQL Server ignores the text written after these dashes in a single line. It is known as commenting out. You can also see a different color in SQL Server Management Studio (SSMS) after you commented on a piece of code.

For example, here, we add a comment in the script to highlight the purpose of the query.

Another example shows I comment out a single line of code using the double dashes. The SSMS IDE changed the text color to green, and SQL Server skips executing this piece of code.

In the below example, we commented on the column [BillingAmt] in the select statement. Therefore, you do not see it in the query output.

The SQL Server Management Studio has an icon to add the double dashes for commenting out a single line character.

Select the line and click on the highlighted icon in SSMS. It puts double dashes in front of the line.

If you select multiple lines and click on the comment out icon, it adds double dashes on each line, as shown below.

You can also use shortcut keys CTRL +K CTRL+C for putting out comments quickly. Similarly, you can click on the highlighted icon to remove the single-line comment. Its shortcut key is CTRL+K CTRL+U.

If we comment using the double dash /(–), SQL Server considers it for a single line. If we need to comment out multiple lines, you need to put a double dash on each line.

It is not a feasible solution if we want to comment out multiple lines of code. Therefore, SQL Server uses multi-line comments that start with /* and ends with */. SQL Server ignores the texts, code written inside these.

You can also use these multi-line comments for displaying useful information about the script. For example, the below script adds the object information, script date, author, description on the stored procedure script.

If any developer scripts out stored procedure later, he can see brief information on who and what was modified.

You get the following error message if the nested comment does not have a closing block mark (*/). 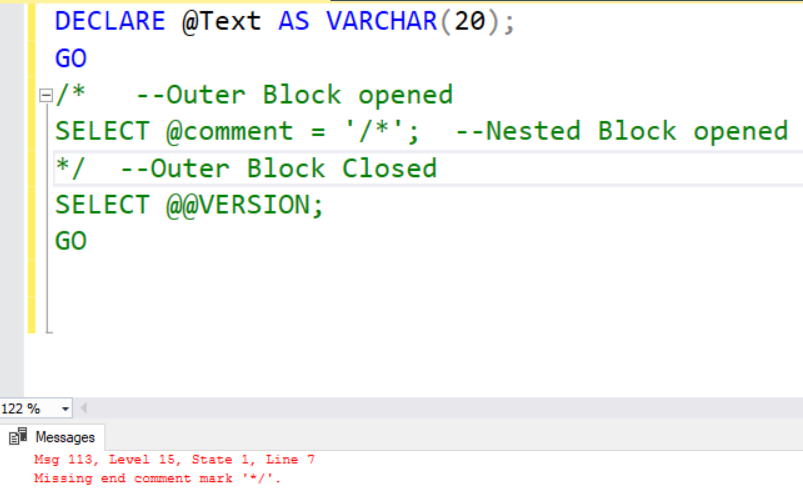 SQL Server uses the Go statement to separate multiple batches in the scripts. However, you cannot use the go statements in the nested multiple line comments because SQL Server reads the go character in a line and considers it a separation of the batch. Therefore, if you try to use it, you get the following syntax errors. 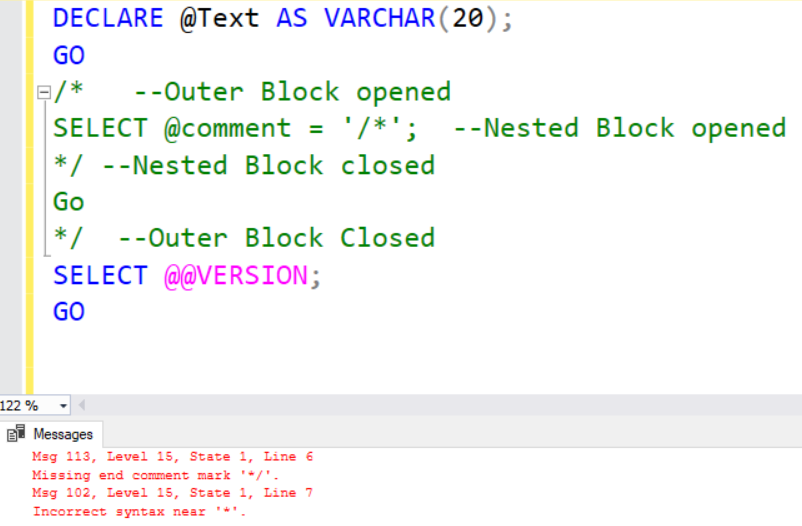 For example, let’s say we add a comment in the following SQL script.

Sometimes, few monitoring tools or diagnostic management views put the entire script in one long line. If we convert the SQL script in a single line, it becomes invalid as SQL Server ignores all texts, code written after the double dash.

However, if you use slash star for comments, you do not get this problem, as shown below.

ApexSQL Refractor tool is helpful for formatting SQL scripts depending on the user requirements. For example, if we do not want single-line comments (double dashes) and convert them into block comments, ApexSQL Refractor helps you. 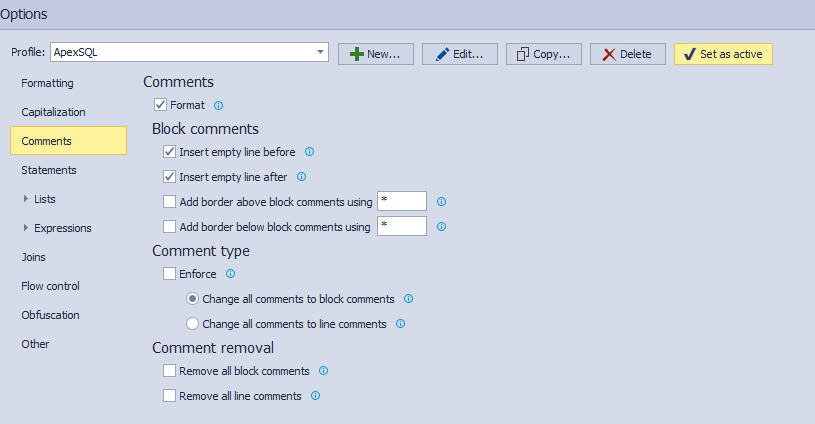 Suppose we have a SQL script that includes the following double-dashes single-line comments. 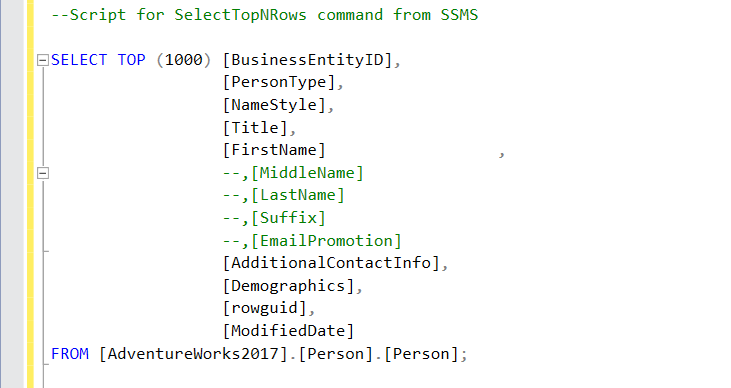 In the ApexSQL Refractor properties, you can see a script preview on the right side with the existing configuration.

Create a new ApexSQL profile and put a tick on the following configurations.

You can see that it converts all comments to block comments and places a border above and below using Asterix(*).

This article explored the SQL Comments and their types to provide helpful information in the scripts. These comments are beneficial to avoid the execution of a particular portion of the SQL script instead of deleting it. You can use the ApexSQL Refractor tool for converting all comments in the block comments with a simplified process.