SQL Server Management Studio is an integrated graphical interface that is used to configure, manage, monitor and administrate the SQL Server instances hosted on the local machine, on a remote server or in the cloud. It provides us with editing, debugging and deploying environment for the T-SQL, XML, MDX and DMX languages. 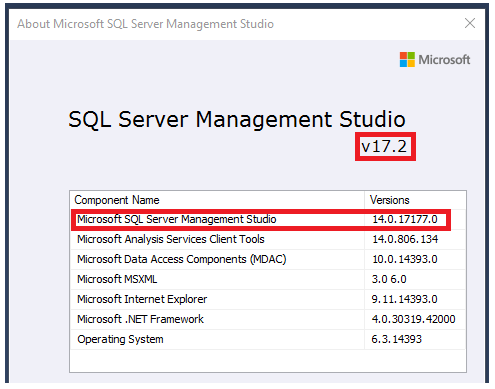 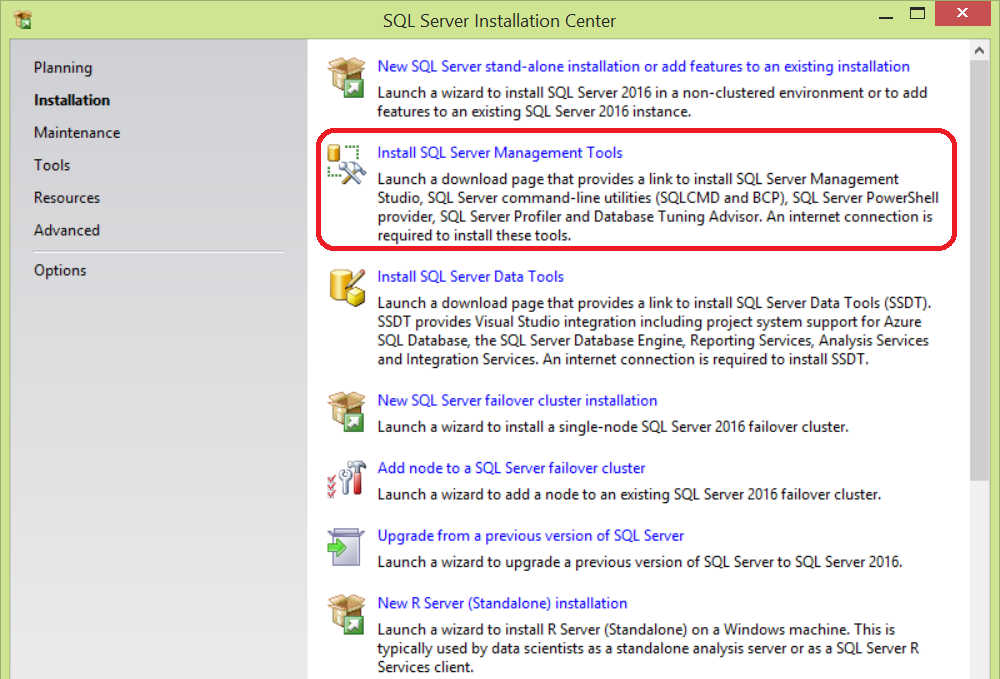 Once the installation file is downloaded completely, you can easily go through the simple installation steps for the SQL Server Management Studio that starts with the window shown below: 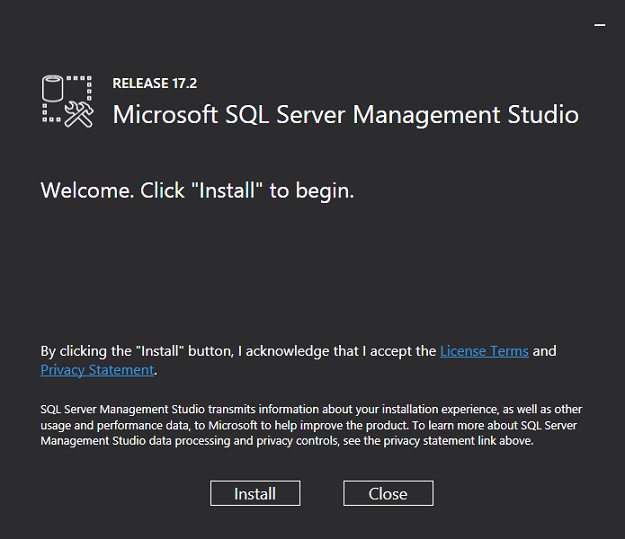 If there is another version of SQL Server Management Studio installed previously in your machine, SSMS 17.2 will not upgrade or replace the already exists copy, it will be installed side by side with that old version, with the ability to work on both copies on that machine, by choosing between it as shown below:

In this article, we will go through the new enhancements that are included in the SQL Server Management Studio 17.2 version. 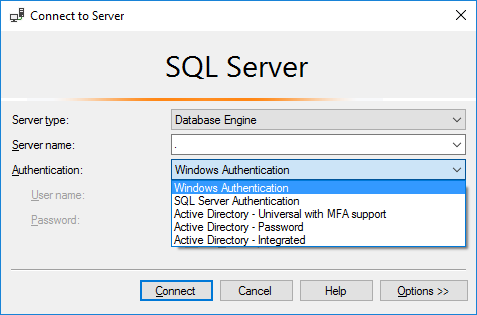 The Match Script Settings to Source option in addition to all scripting options are no longer available under the General Scripting Options section. They can be found now under its own new section, called the Version Options. You can browse it by choosing Options from Tools in the menu bar as shown below:

Under the SQL Server Object Explorer tab, choose the Scripting sub-tab and you can override the True default value of the Match Script Settings to Source option under Version Options section as you can see below: 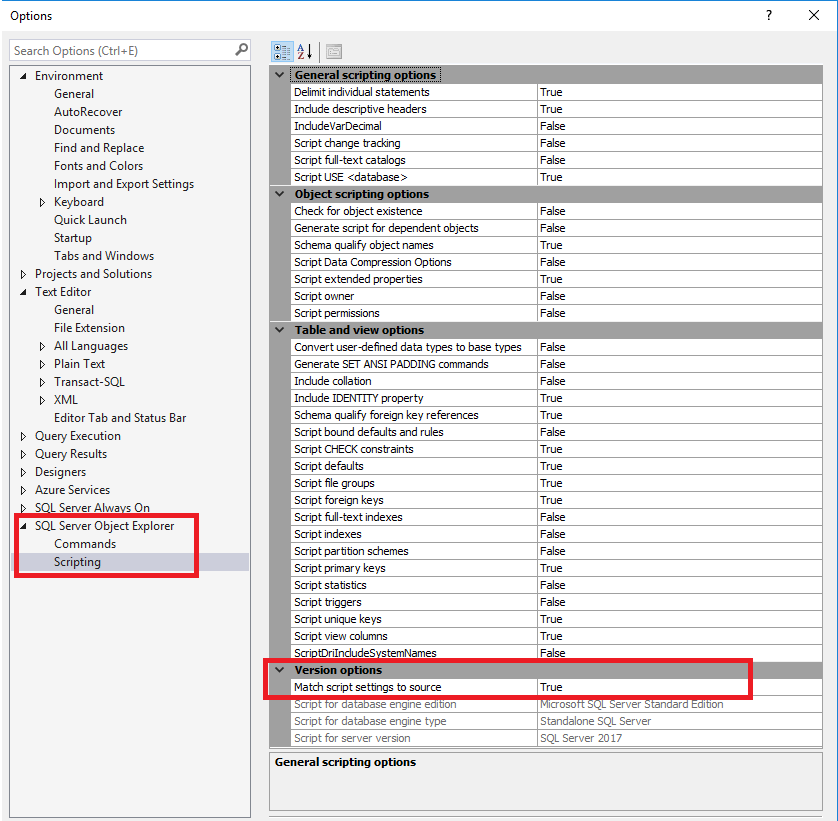 Microsoft SQL Server 2005 Performance Dashboard provides us with a group of reports that help database administrators in identifying different types of performance issues and resolve it easily. These performance reports present the performance statistics using the system Dynamic Management Views. With all the updates applied to the performance dashboard to work with the new SQL Server versions and take benefits from the newly defined dynamic management views, it still not included within the SQL Server installation media, and requires a separate download for its installation file from the Microsoft download page to be installed on your machine. 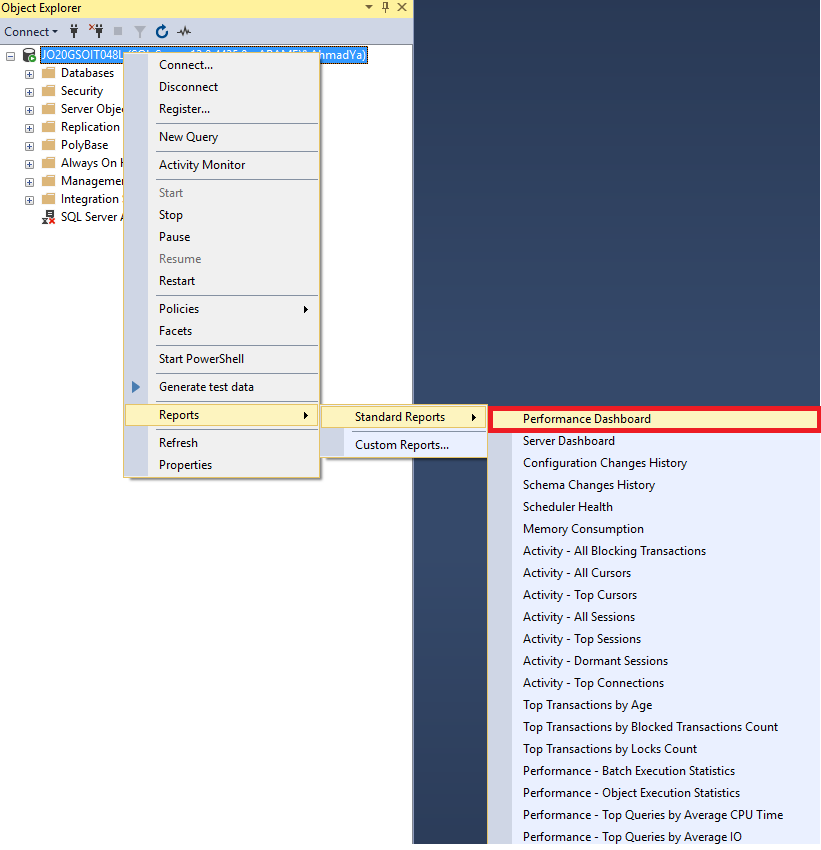 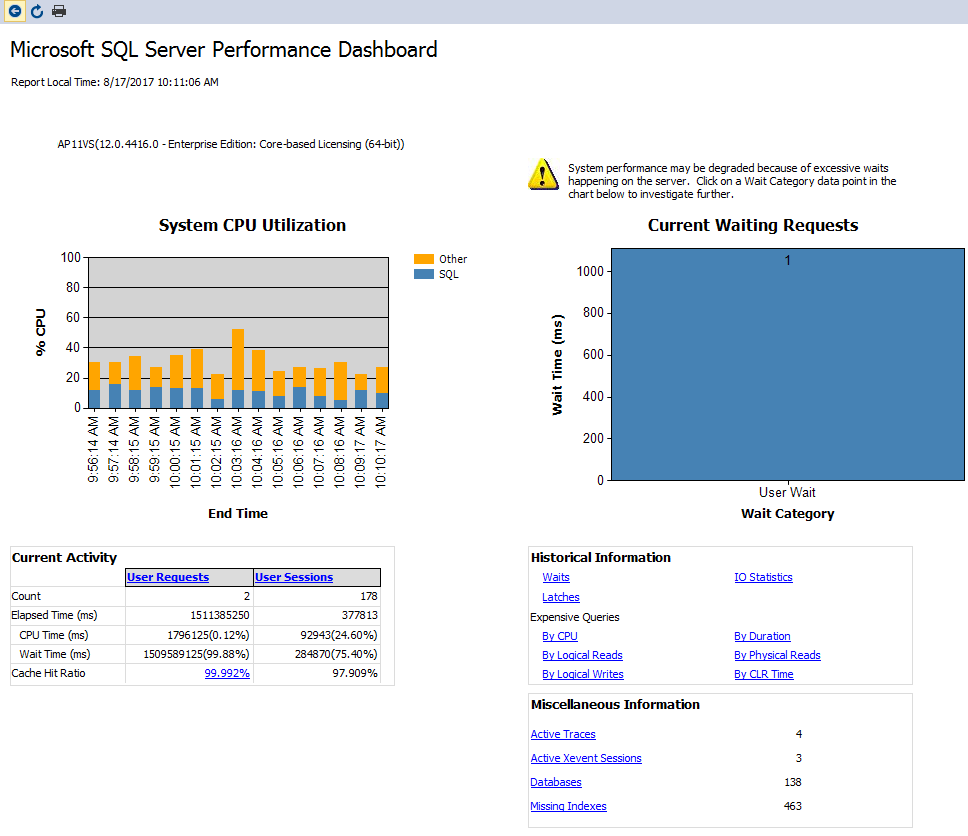 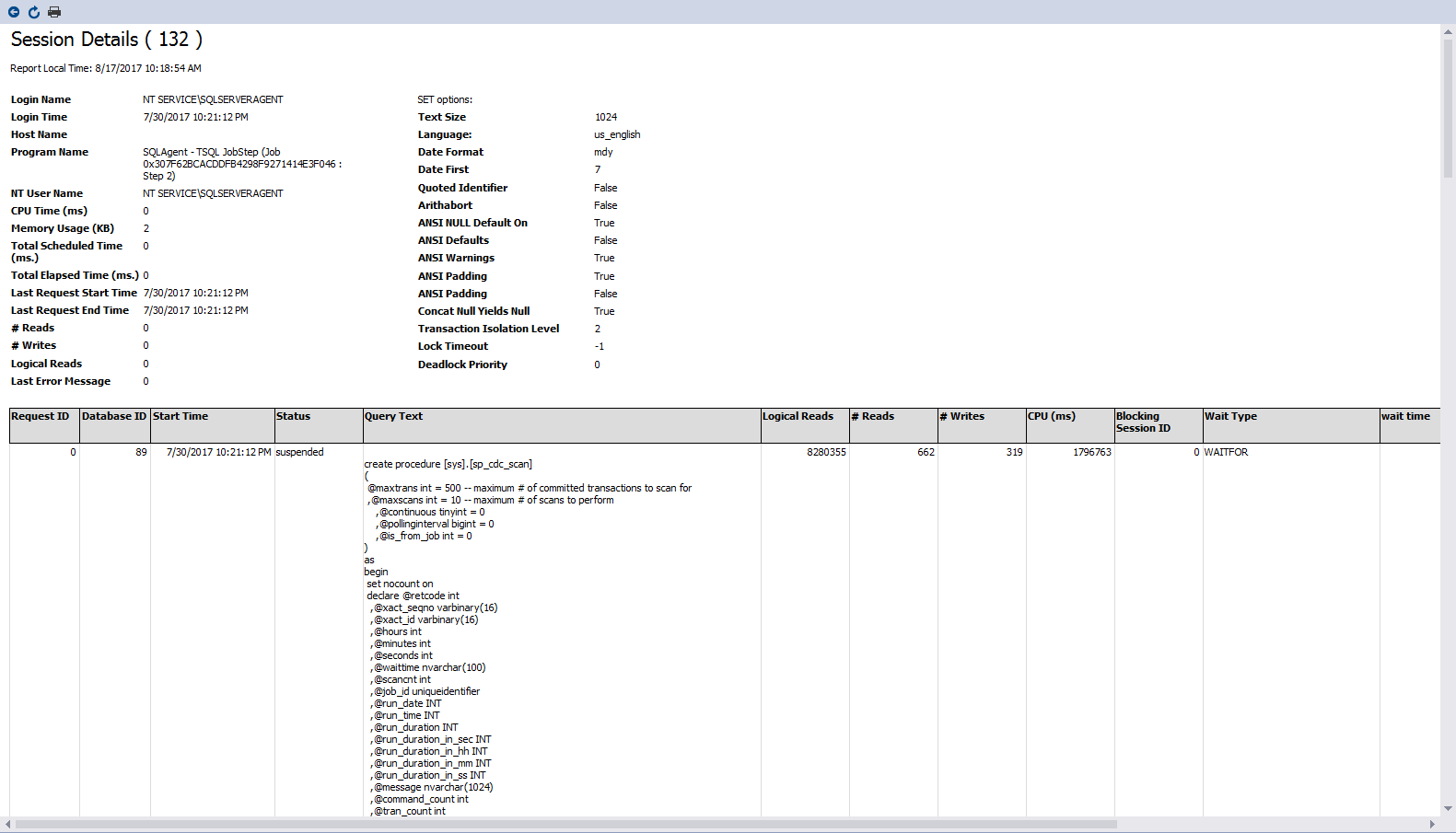 The Performance Dashboard helps us in getting information about missing indexes that could help DBAs improve query performance as shown below: 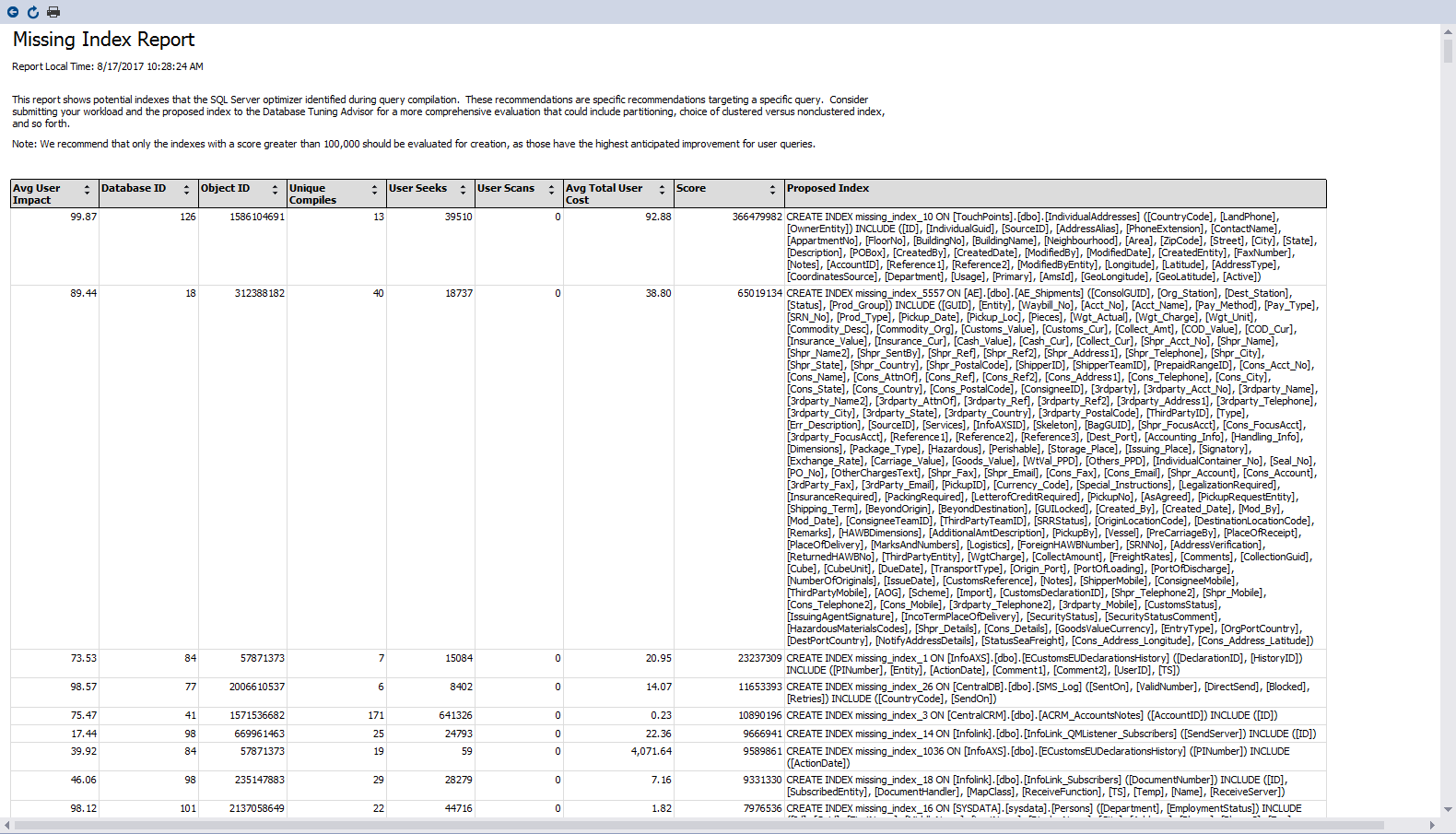 In addition to metadata about the monitored databases hosted in the connected SQL Server instance as follows:

When you analyze a big execution plan to identify a specific operator, table name, column name or the node with the highest cost, it may take you a long time and big effort to find it, due to a large number of nodes and information provided in the execution plan. It was a dream from the database administrator to click CRTL+F and search for such plan information. With SQL Server Management Studio 17.2 the dream comes true, as it includes the ability to search for a lot of information in the graphical showplan. This new search feature can be used with any feature that uses the graphical showplan, such as the Query Store, the Plan Comparison, and the Plan Scenarios.

To start the node information search in the opened graphical showplan, right-click on the plan and choose Find Node as shown below: 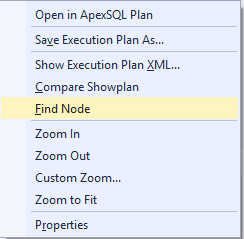 Or just click CTRL+F when you open the graphical showplan, and a new search bar will be displayed. Assume that we need to tune the below SELECT query by studying the graphical execution plan using SQL Server Management Studio 17.2:

Once the graphical plan is opened, click CTRL+F and the search bar will be displayed where you can start the node information search on the opened plan as shown below:

The new search mechanism allows you to choose from different properties, making the graphical showplan navigation process easy. With the ability to search for an exact value using (=) operator or a similar value using the (Contains) operator. The list of properties that you can search for are shown below:

For example, you can search for a node that represents the operation on a specific table, by choosing the table property, choose the comparison operator, which is contains in my example, then write the table name in the blank and click on the arrow that will show you the search result as shown below:

Another example, is to search for the node that reads more than 1000 rows, by choosing the ActualRows property, choose the comparison operator, which is contains in the below example, then write (1000) in the blank and click on the arrow in order to see the search result as shown below:

The last example here, with infinite number of search criteria that you can perform, is to search for the node with a specific operator, which is scan operator in our situation, by choosing the PhysicalOp property, choose the comparison operator, which is contains in the below example, then write (scan) in the blank and click on the arrow and you will see the search result as shown below:

SQL Server Management Studio is a graphical user interface that can be used to develop and administer the SQL Server instances hosted on the local machine, remote server or in the cloud. SQL Server Management Studio 17.2 is the latest released version of the SSMS that comes with a number of enhancements such as the new authentication method used to connect to Azure SQL Database and SQL Data Warehouse, the new scripting options, the integrated Performance Dashboard and the Showplan node search that are described in details within this article.

Next articles in this series