As all other database engines that require a GUI too to interact with, Microsoft built SQL Server Management Studio as a tool that provides an environment to manage, configure, monitor and administrate the SQL Server infrastructure for different kind of instances, that are installed locally at your machine, on a remote server with Windows or Linux operating systems or hosted in the cloud such as SQL Azure or Azure Data warehouse.

Starting from SQL Server 2017, SQL Server Management Studio takes its own track of versioning, by assigning that 17.X number for the new releases of the SSMS, separating it from the SQL Server Engine version number, that is 14.0 for SQL Server 2017 version.

Also, starting from SQL Server 2016 version, SQL Server Management Studio has its own installation media, that is separated from the SQL Server Engine installation, that can be downloaded from the Microsoft Download page and installed to the local machine or server easily, taking into consideration that, the new SSMS version will not replace the already existing SSMS versions. Instead, SSMS 17.X will be installed side by side with the existing SSMS 2016 and 2014 versions. 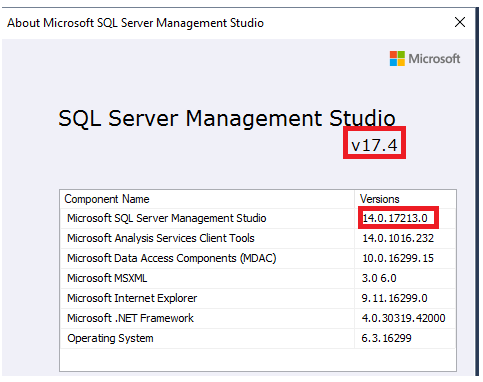 SQL Server Management Studio 17.4 works with all supported versions of SQL Server 2008 and later, including working with Azure SQL Database and Azure SQL Data Warehouse. SSMS 17.4 can work with SQL Server 200 and 2005, but some features may not work properly. From the OS side, SSMS 17.4 supports Windows 7 (64-bit) and later client operating systems and Windows Server 2008 R2 (64-bit) and later versions, making sure that the latest service pack is installed.

In this article, we will discuss a number of important bugs that are fixed in SSMS 17.4, in addition to the most useful enhancements and new features added to the SSMS 17.4.

In SSMS 17.4, Microsoft updated the SQL Server Management Studio by fixing a large number of bugs that customers faced and reported in the previous SSMS versions. Some of these important bugs that are fixed in this new build include: 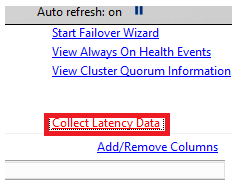 Clicking on the Collect Latency Data option, the below message will be displayed, informing you that the latency data collection will start working after checking that the SQL Server Agent is working on all replicas, as shown below:

The collected latency data can be displayed using the two newly added Always On availability group built-in reports; AlwaysOn_Latency_Primary and AlwaysOn_Latency_Secondary. The two reports are viewed by right-clicking on the Availability Group name, choose Reports, then Standard Reports from where you can choose the latency report, as shown in the snapshot below:

The opened Always On availability group latency report consists of many parts. The first part displays a list of all availability replicas with the role of each replica within the Availability Groups; PRIMARY or SECONDARY, that will be like the below:

The second part of the Always On availability group latency report is the Latency Graph, that shows the time required to commit the transactions at the PRIMARY side (in microseconds) over a specific period of time, as in the snapshot shown below: 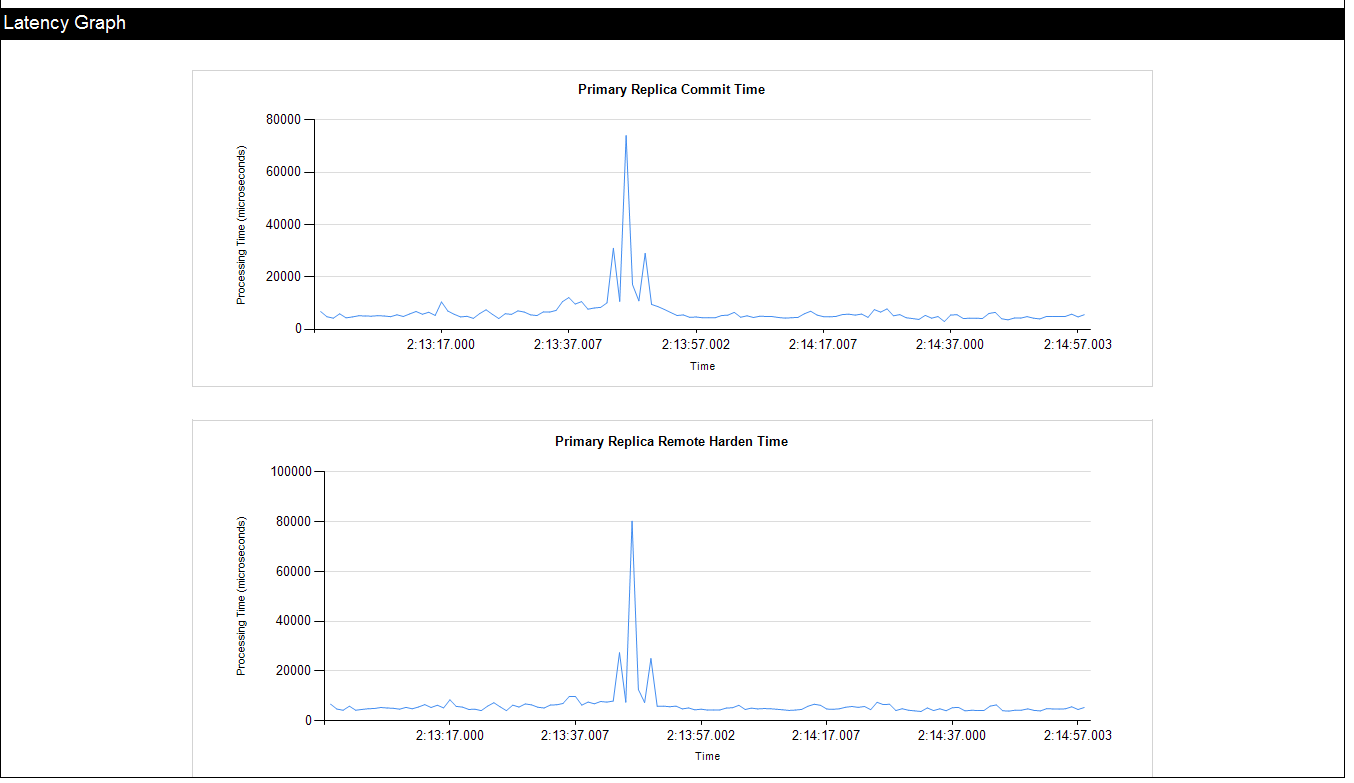 The last section of the Always On availability group latency report is the Primary Replica Statistics, that shows the total amount of time (in microseconds) consumed in the Commit, Remote Harden, Compression, Local Flush and Send processes, as shown below:

In SQL Server Management Studio 17.4, a number of enhancements are performed on the XE Profiler, that is added to the SQL Server in SSMS 17.3. These enhancements include:

The SQL Server Import Flat File Wizard, that is introduced in SSMS 17.3, enhanced in SSMS 17.4 by providing us with a way to choose the schema name of the destination table that will be created and to which the flat file data will be inserted, as shown below:

SQL Server Vulnerability Assessment (VA) service, introduced the first time in SSMS 17.4, is mainly used as a preventative security measure to scan, track and remediate the databases for potential vulnerabilities and deviations from Microsoft’s recommended best practices, such as misconfigurations, excessive permissions, and unprotected sensitive data or any issue that presents risks to the database and its critical data, using a knowledge base of rules that flag security issues when it runs a scan on the database. In other words, the SQL Server Vulnerability Assessment provides us with a visual way to check the security state of our SQL Server instance with actionable steps that help in investigating, managing and resolving the detected issues and provide customized remediation scripts where applicable. The generated Vulnerability Assessment report can be customized for a specific environment, by setting an acceptable baseline for permission configurations, feature configurations, and database settings. 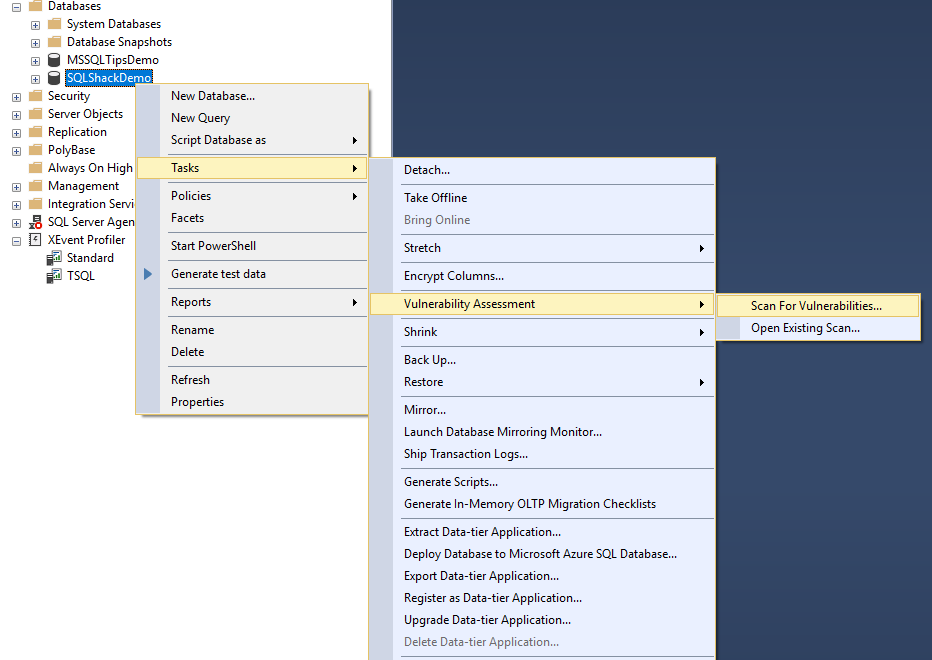 From the Scan For Vulnerabilities window, specify the location where the scans will be saved. You can change the default location by clicking on Browse to specify a customized location. Click OK to start the lightweight and safe vulnerabilities scan on your database, that will take few seconds to run, as shown below: 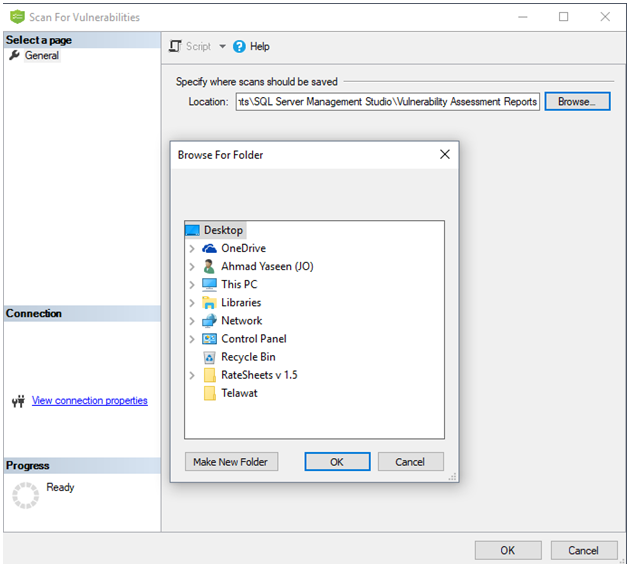 When the scan is completed, the scan report will be saved to the previously specified path and automatically displayed in the SSMS pane. The displayed report contains an overview of the current database security state, including a summary of the total number of security checks and the number of failed checks, with their respective severities. The report includes also a classification of passed and failed checks such as the category that this check belongs to, like sensitive data discovered or an issue with database principals permissions, the risk of that finding that describes its deviations from best practices and any extra information, if available, as shown in the scan report below:

If you find that a specific failed check is very critical for your environment, click on it and drill down to check full detailed information about that finding including full description about it, the impact of that issue, why it failed and an actionable remediation information that can be used to overcome and resolve that issue, as shown below: 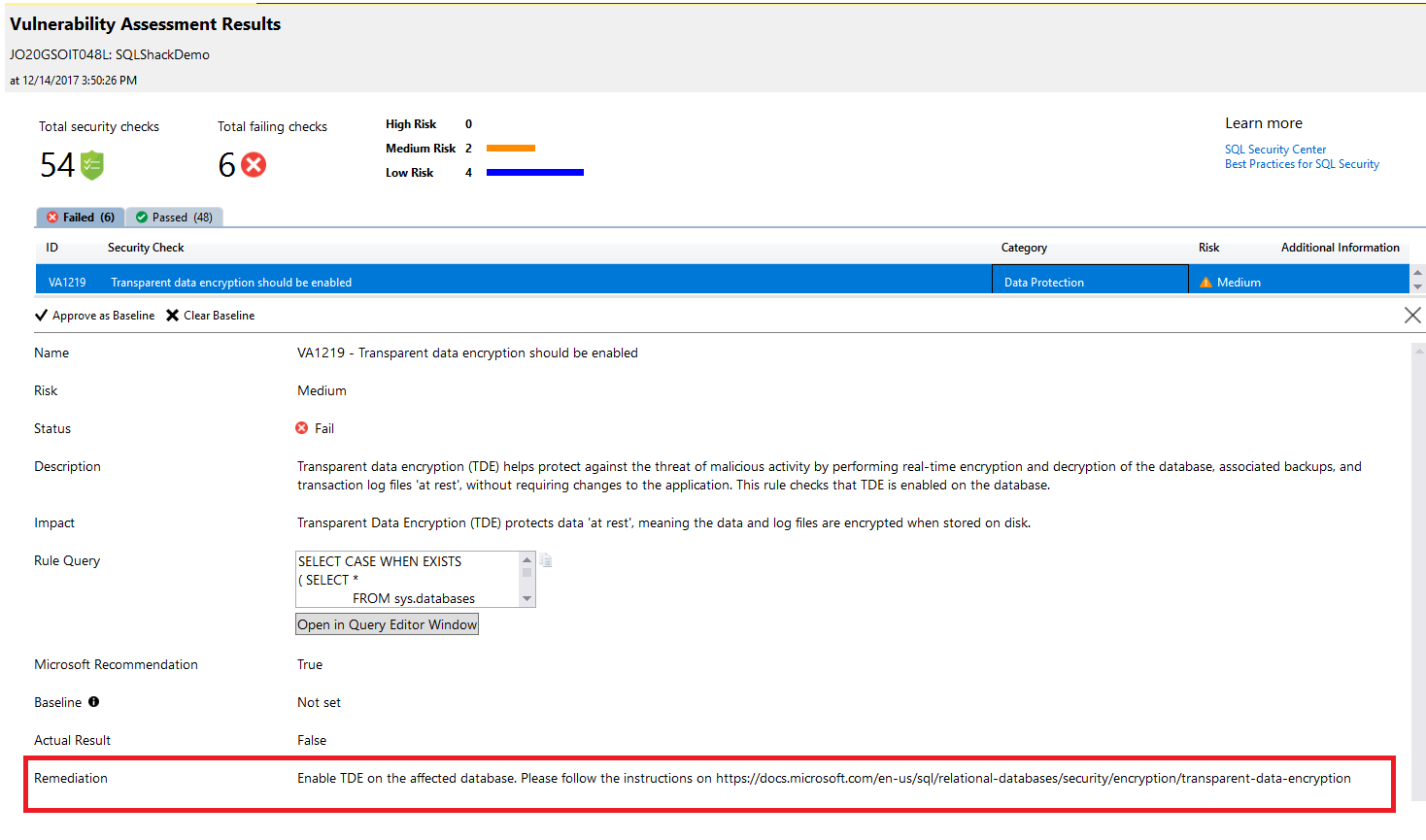 SQL Server Vulnerability Assessment scan report allows you to mark a specific result as being an acceptable customized baseline in your SQL Server instance. In this way, the generated scan report will measure the deviations from the baselines you specified and the results that will match the specified baseline will be considered as passed in the scanning process, as you can see in the report below: 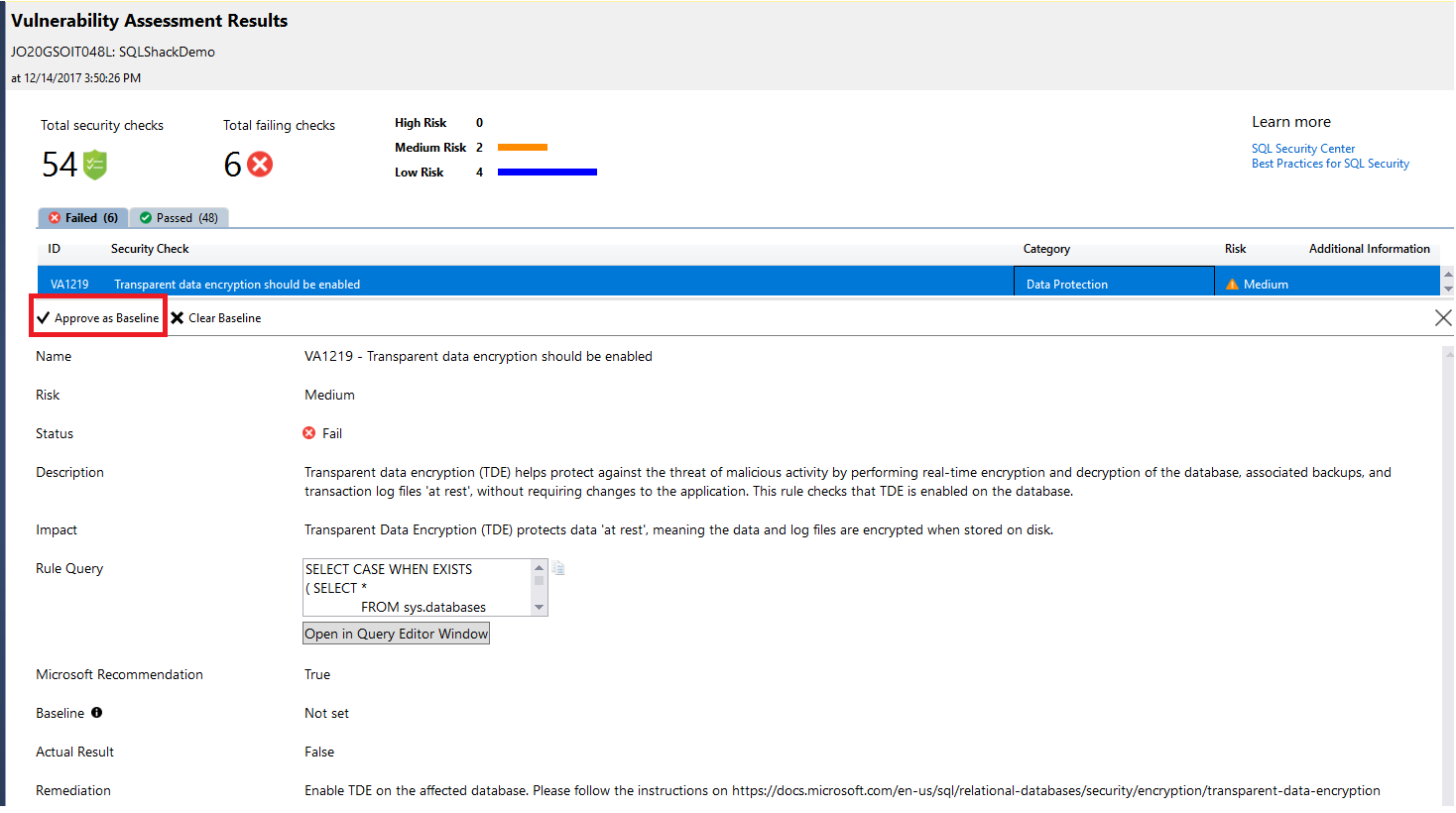 If you choose a specific check to be Approved as Baseline, the below message will be displayed to make sure that you choose that check as a baseline for your environment. Click Yes to confirm:

And the report will mention that you need to run a new scan to start taking the selected baseline in the consideration as shown in the message below:

Running a new scan to track the customized baseline rule, the report will display the checks that are performed based on its deviation from the approved baseline, as shown in the new scan result below:

And from the opened scans directory, you can choose the Vulnerability Assessments scan result you want to view as below: 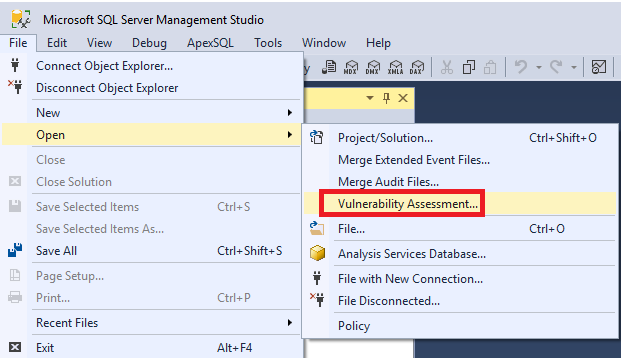 As you see from the previous results, the Vulnerability Assessments helps in monitoring database security state and maintaining it at a high level of security all the time, in addition to the ability to set your own baselines that fit your organization’s policies. It also provides you with useful security scan reports for the compliance process.

He is a Microsoft Certified Professional with a good experience in SQL server development, administration, performance tuning, monitoring and high availability and disaster recovery technologies. Also, he is contributing with his SQL tips in many blogs