When we’re developing solutions, we can sometimes forget useful commands we can use in T-SQL that make it convenient to remove data, eliminate objects, or carefully remove data. We look at three of these commands with a few examples of where we might consider using them in development, or in rare production cases. While they may offer us speed and convenience in some cases, we also look at some situations where they may not be the best tool to use.

Truncating a table over deleting every row from the table

Deleting data can be one of the most expensive DML operations and while we must do it in some situations such as deleting some records in a table, we do have an alternative with truncate if we need to remove every record in a table without each row removal being logged. In development, we will often have more freedom to truncate a table when we need to remove all rows, which will help us over using delete.

In practice, one situation where deletes and truncates can be compared is transactional replication where we’ve defined a rule that on a reset, we want to remove every row of data in the destination table and repopulate the data from the source, as a load of inserts in our situation will perform better than updates (if the situation has much fewer updates than inserts, this would not be true). If we don’t want each row elimination tracked in the transaction log, a delete operation before repopulating the data becomes expensive, whereas a truncate operation does not. In this example, we’re still assuming a few things to prefer truncates over deletes or drop, re-creates and inserts:

While this command can be helpful in many situations involving development or full refreshes of a table, we should not use (or may be unable to use) the truncate command in some situations, such as the following:

What about development situations where we want to remove a subset of records over removing all records? If we want to take extra caution about removing records, we can use a CTE for first filtering before removing records. In the below queries we see the work shown with a query that only uses a CTE for a select, then a delete statement from the same CTE.

Highlighting the select statement within the CTE. If I highlight the full delete and run it, only the shown two rows will be eliminated: 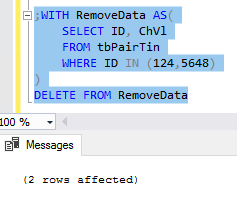 Unlike truncate statements, delete statements may be costly due to errors or an error. If we know that we need to remove all data in a table, we’re less likely to make a mistake with a truncate since all data are being removed from a table. However, a delete statement can introduce errors by accident because if a filter is wrong, mistyped, or forgotten, records are wiped out and must be recovered. Using CTEs add extra work but offers two benefits to delete statements:

While this does raise awareness and adds a convenient check in place, it does require some extra effort on the part of the developers.

Dropping all development tables by schema that are no longer required.

If we’re testing a set of tables for a proof-of-concept and we don’t intend to keep the tables in our development, the below procedure will drop all tables by a schema. If we validate our proof-of-concept, we can retain the tables or migrate them to our default or permanent schema; if we invalidate our proof-of-concept, we can remove all the tables. This procedure also makes it easy when we’re demoing concepts to teams and we create tables during a presentation under a demonstration schema for easy later removal. Finally, if we keep table backups for when we change lookup data or other smaller data sets in production and throughout our environments, we can use other tables schemas for these backups and drop them later after our testing is complete (a rare production use-case).

Before the execution of the stored procedure.

Following the stored procedure drop of all tables.

While it is bad practice to use keywords when naming tables or schemas, this is unfortunately common. The drop statement wraps the schema and table name within brackets using the QUOTENAME function to prevent this situation. In the below example, we create a schema and table that are both keywords and drop them successfully:

If you are the architect or the designer and have control, it is best practice to avoid using keywords for naming objects, but this will help in those situations where we’re required to use them by architects or clients who do not care for following best practices.

With this, we can develop on a schema and only keep objects we use. Otherwise, we can remove all objects by our development (or other named) schema.