When we develop security testing within inconsistent data volume situations, we should consider our use of anti-malware applications that use behavioral analysis. Many of these applications are designed to catch and flag unusual behavior. This may help prevent attacks, but it may also cause ETL flows to be disrupted, potentially disrupting our customers or clients. While we may have a consistent flow of data throughout a time period – allowing for a normal window of behavior to occur – we may also have an inconsistent data schedule or inconsistent amount of data that cause these applications to flag files, directories, or the process itself.

In many environments, security testing involves checking for possible vulnerabilities against attack. In one example I had to investigate, the testing overlooked significant changes in data load and extract volumes that were possible. The assumption was that these loads and extracts would happen within a data range (such as “within 500GB per day”), but it only took one exceptional day to cause the anti-malware application to flag the load before the extract. The result of this was an outage with reports. It’s possible that we’re not checking for legitimate process ranges in our testing and this can be costly in the same manner as a breach in some contexts. In this case, the solution for future security testing required resources and time to improve the possible range of data volume during extracts and loads. 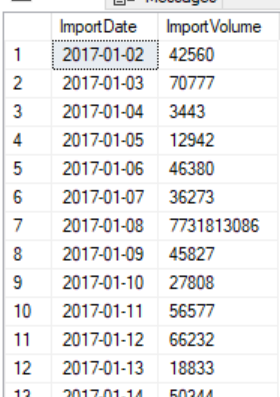 If we’ve seen this issue or if this may be a possible issue, we want to prevent it through tracking our data volume ranges in each environment. This means that following an extract or load, we want to track the amount of data – whether we want to use row counts, data size, etc. When we review this on reports, we want to know the average data volume and the maximum data volume. Consider that we may have an extract data volume of 100,000 records for 700 days consistently, then one day we have an extract data volume of 1,500,000 records. That one data point would not be enough to affect the average, but it may be flagged by anti-malware because it’s unusually high (this is similar in structure to the incident I reviewed). Depending on these numbers, we may want to review how we’re security testing for a possible false flag with anti-malware.

In the below script, we create a table for identifying data volume ranges over time and we include the environment in this table, as there may be variance in environments that we want to know about ahead of time. Because aggregates will generally be used when querying this table and new records will be infrequently added, I create it with a clustered columnstore index. We may use other derivatives of this table, such as storing the data size in gigabytes; the key is tracking how often we get unusually large extracts or loads, the size of these large extracts or loads, and whether our security testing will pass these situations.

In this example, our security testing in QA would not catch the possible data volume range that would exist in production

This may give us false positives in our security testing if anti-malware software is involved because it may not flag our extracting or loading in development due to a low data range volume but flags it in production. It’s the production cost of an outage we want to avoid. The technique we can use in testing is to match the extreme range in our data volume that may exist in production. If production may have a data load that is seven multiples of the average load, we should duplicate the same type of multiple for development and QA. We must remember that it’s not the amount of data, but the range of data volume from the maximum load (or extract) to the average.

We will build our ETL flows around possible solutions that keep our environment protected while allowing legitimate data flow to occur. For these situations, we may do one or more of the following:

(Example) Some anti-malware applications may allow us to exclude some file paths for scanning.

Attackers will often perform reconnaissance on a target before attacking so that they understand their target before they attack. This means that patterns like allowing folder paths, time flexibility, etc. may be discovered ahead of time.

Anti-malware applications can provide us with tools to prevent attacks or identify attacks. However, in large data volume environments with inconsistent extracting or loading, they may add complexity if they flag legitimate data functionality. Our security testing should involve identifying where this may occur and how we can prevent and work-around this while being cautious about what our solution may involve. While we want to ensure our data flow, we also want to be careful that we don’t open our environment to attacks.