In this article, we will explore some internal working principles of SQL Server statistics.

What is Cardinality Estimator (CE)?

The Cardinality Estimator (CE) is the core subunit of the SQL Server query optimizer and its responsibility is to predict how many rows will be returned from a query. The accuracy of this prediction directly affects the generated query plan efficiency. Hence, this effect upon the query plan makes CE decisive and critical on the query performance.

SQL Server statistics stores the columns data distributions and they use histograms to organize the distribution of the data. The cardinality estimator uses these histograms to obtain the required analytical data and then runs a mathematical algorithm to estimate how many rows could be returned from a query. In order to figure out how the cardinality estimator performs these predictions more clearly, we will make some examples. However, firstly we require a sample table thus we will create a sample table through the following query. This table is a heap copy of the SalesOrderHeader table of the Adventureworks database.

What is the meaning of predicate?

A predicate defines a conditional expression that is applied to rows of the table to filter the result set of the query.

In this first example, we want to only return particular rows that the Freight column equals a specified value. Before executing the query, we will enable the actual execution plan.

As seen in the execution plan of the query, the Estimated Number of Rows for all Execution has been estimated at 1551 rows by the CE, and this estimation is calculated using a particular statistic. The used statistics details can be seen under the OptimizerStatsUsage attribute of the execution plan. 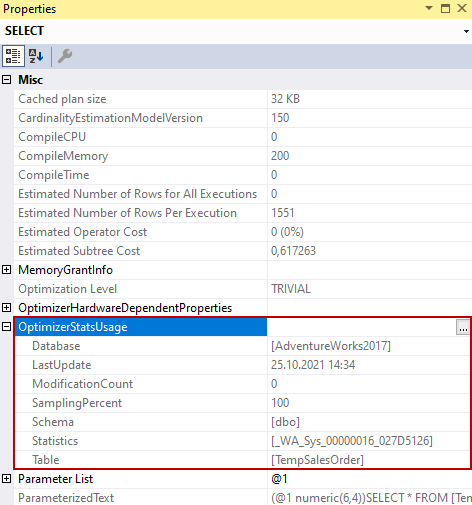 Through the DBCC SHOW_STATISTICS command, we can obtain detailed information about the statistics density and its histogram. 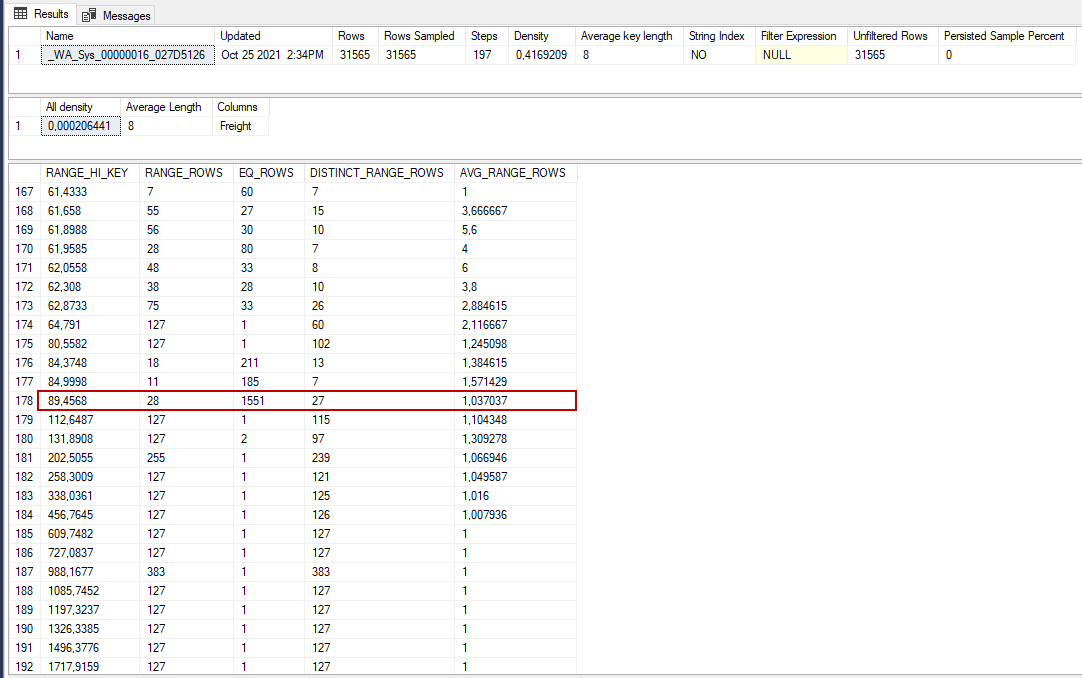 The histogram data EQ_ROWS column shows the number of rows that have the same value as the predicate. The 178th row of the histogram matches with the predicate row and the estimated rows calculation is equal to 1551.

As we can see, the optimizer calculated the estimated number of rows is 1154,49, and this estimation is made using the following formula:

As we can see, the estimated rows are 1551, and the total number of the table is 315645. We apply the following formula to calculate the first predicate selectivity.

We use the same formula to calculate selectivity for the second predicate.

As we can see, we achieved the estimated number of rows using SQL Server statistics. However, we need to take into account one point in this formula, before starting the calculation we need to sort the selectivity of predicates into ascending order and then apply the formula.

In this last example, we will add three predicates in our sample query and we will use the query_optimizer_estimate_cardinality event. This event can be used to diagnose cardinality estimate issues. Through the following query, we will create an event session and start it.

As the second step, we will execute the following query.

The event session captured our query and returned detailed information about the internals of the CE. When we click the CalculatorList field we can find out the selectivity of each predicate.

At first, we will sort the predicate selectivity and then apply the formula:

As can be seen, the result we found is almost the same as the estimated number of rows returned from the query.

In software, development Legacy code terms describe the inherited codes from an older version of the software.

As an alternative method, we can enable legacy cardinality in the Database Scoped Configurations. 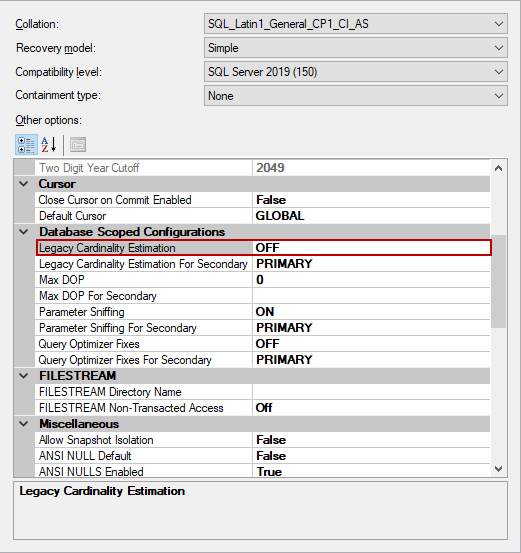 However, if we apply this change to any database the cached query plan will be removed, and if we don’t have serious reason to use legacy estimator using FORCE_LEGACY_CARDINALITY_ESTIMATION hint will be more reasonable at the query level. Using the legacy cardinality estimator will change the estimated number of rows because of the legacy estimated row calculation algorithm. We will execute the following query using the FORCE_LEGACY_CARDINALITY_ESTIMATION query hint.

The result we found exact matches with the estimated number of rows returned from the query.

We will create an event session to capture which activities are performed by the SQL Server.

In this last step, we execute our sample query. During the execution of this query SQL Server will create three individual statistics.

After execution of the query let’s interpret the extended event data.

The StatMan is an internal aggregation function and used for statistics operations. We can see the usage of this function in the captured event data.