In this article, we will learn the basics of Parallel Execution Plans, and we will also figure out how the query optimizer decides to generate a parallel query plan for the queries.

When creating a query plan, the query optimizer is affected by various parameters. For example, the following parameters affect the generated query plans.

What is parallel processing?

The parallel processing aims to separate big tasks into more than one small task, and these small tasks will be completed by the discrete threads. In this approach, more than one task will be performed in unit time; thus, the response time will be reduced dramatically. This idea does not change for SQL Server; it tries to process queries that require excessive workload in a parallel manner. The query optimizer in SQL Server takes into account three settings when generating a parallel query plan. These are:

In this article, we will use the AdventureWorks database, and we will also use the Create Enlarged AdventureWorks script to generate an enlarged copy of the SalesOrderHeader and SalesOrderDetail tables. 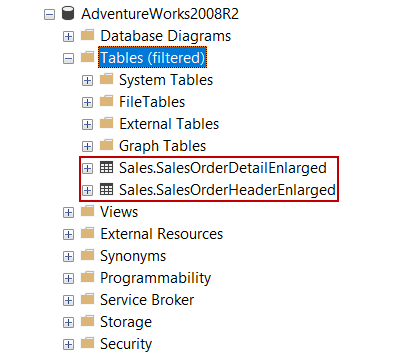 As a second step, we will create a non-clustered index through the following query.

Lastly, we will switch compatibly level to 150 (SQL Server 2019) so that our test database will be ready for all examples of this article. 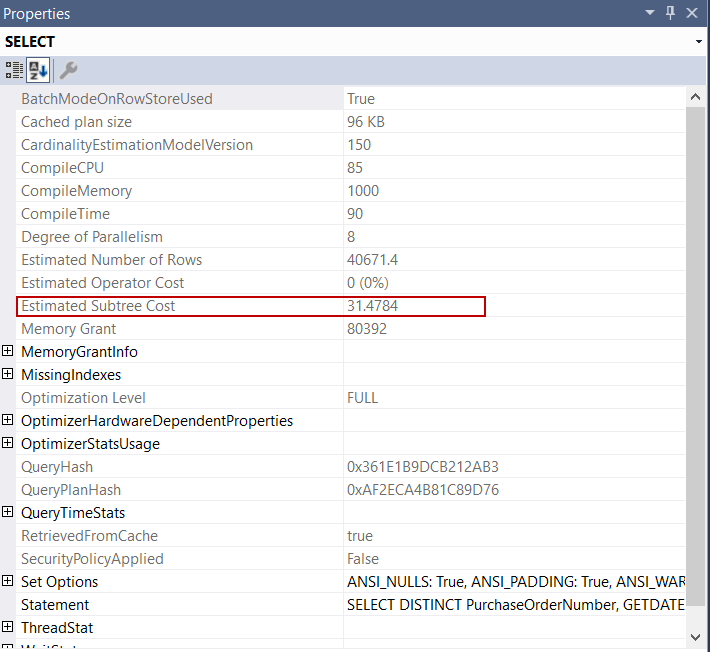 When this value exceeds the Cost Threshold for Parallelism setting, the query optimizer begins to consider creating a parallel query plan alongside the serial plans. The default value of this setting is 5, and it can be changed using SQL Server Management Studio or Transact-SQL. 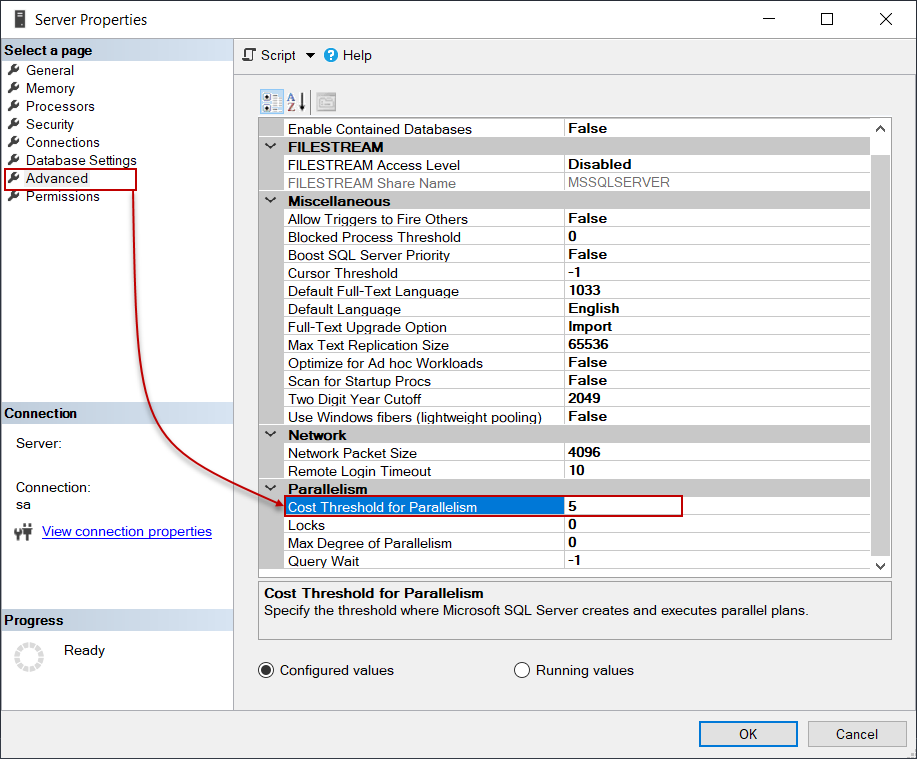 With the help of the following query, we can set the cost threshold for parallelism value as 20.

Now we will execute the following query and analyze the actual execution plan.

If we add the ENABLE_PARALLEL_PLAN_PREFERENCE query hint at the end of the query, the query optimizer will decide to use a parallel execution plan.

Max Degree of Parallelism, also known as MAXDOP, is a server, database, or query level option that determines the maximum number of logical processors that can be used when a query is executed. By default, this option is set to 0, and it means that the query engine can use all available processors. We can find out this value under the Advanced settings on the Server Properties page. 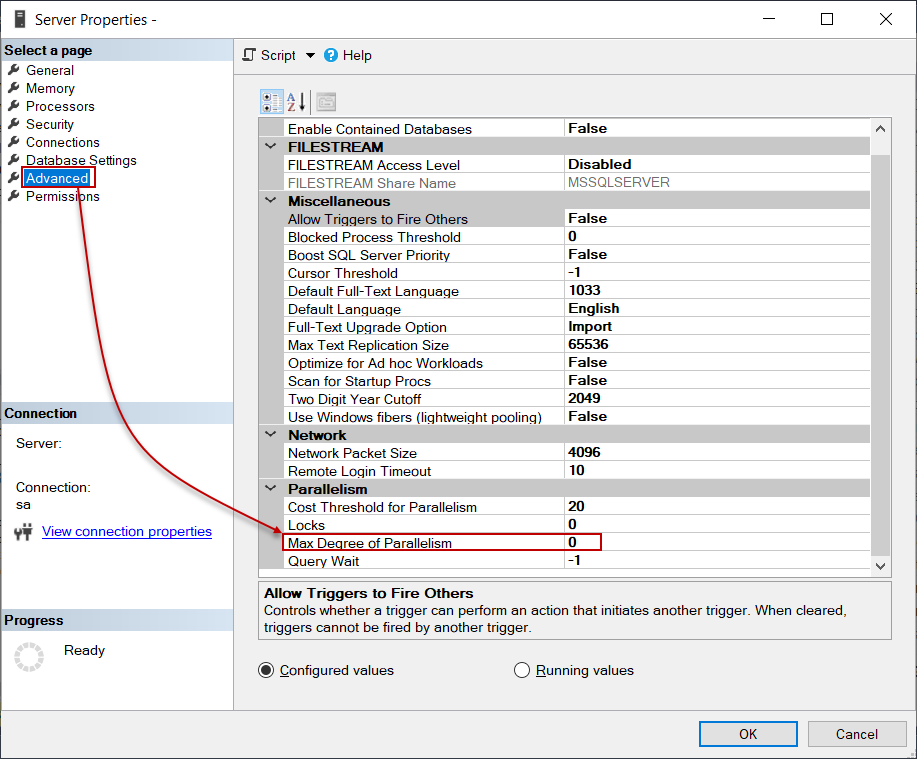 On the other hand, this value can be changed for a particular database and can be seen on the Options tab of the database. 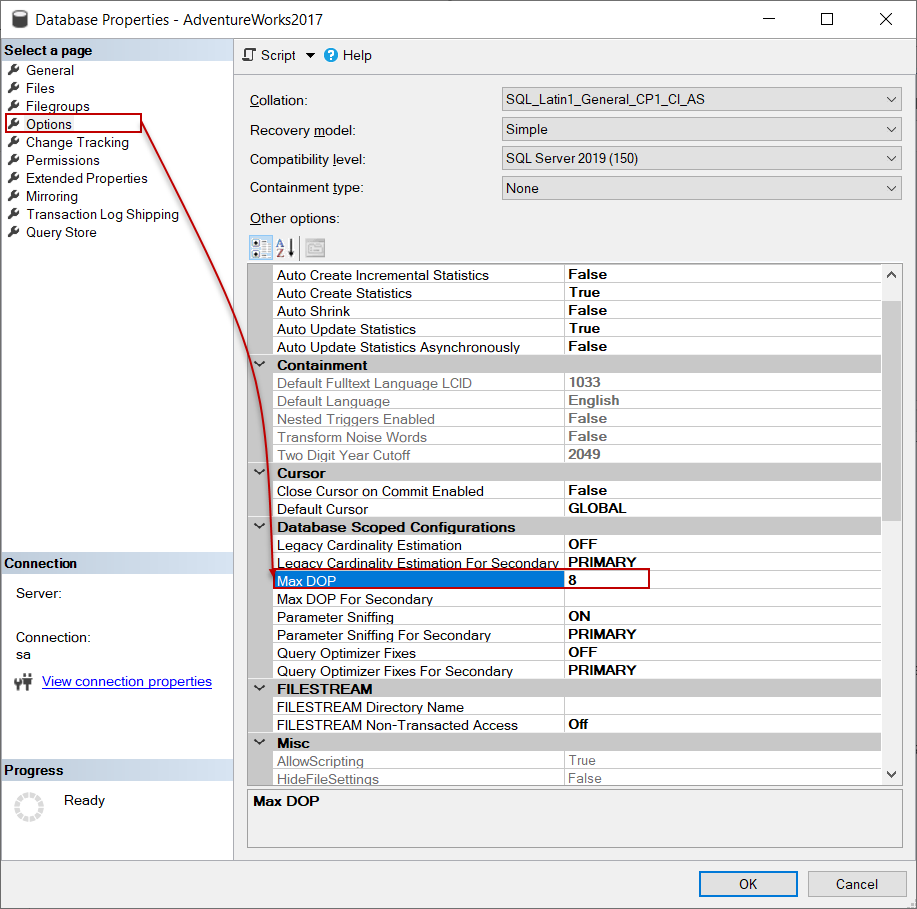 The MAXDOP hint can be used to explicitly specify how many processors can be used by a query. For the below query, we will limit the maximum number of CPUs to be used to 2.

As we can see, the NonParallelPlanReason attribute obviously shows why the query optimizer does not generate a parallel execution plan. For this example, the attribute value shows the MaxDOPSetToOne value because we have set the MAXDOP option as 1.

In SQL Server, this option helps to restrict specific CPU core usage. So that the SQL Server uses only the dedicated CPU cores. However, about this option, Microsoft warns us with the following note:

To find this option, you can navigate to the Processors tab on the SQL Server properties page. In the following illustration, we will set the only one CPU core to SQL Server. 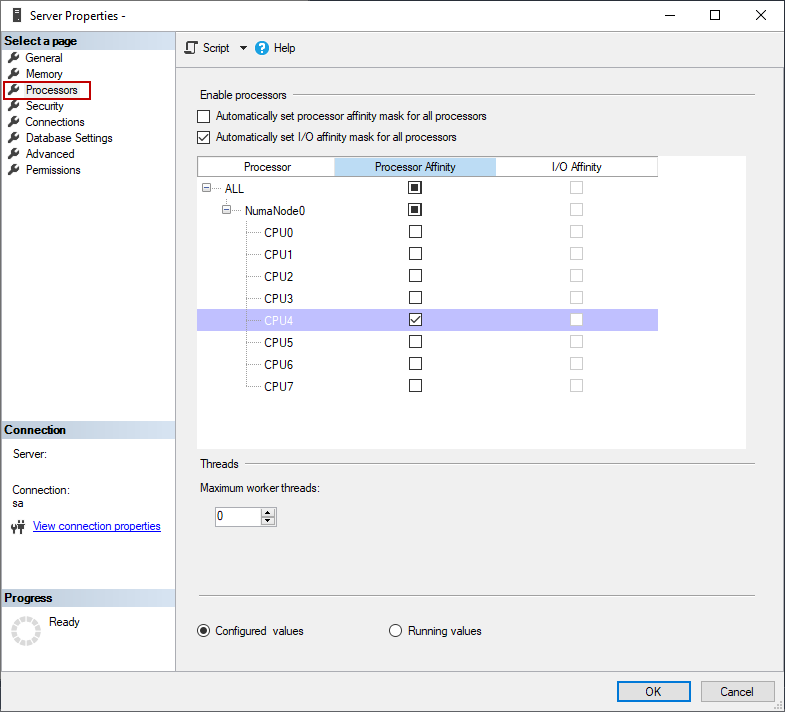 Now we will execute the following query and interpret the query plan.

In this execution plan, we can see a new value for the NonParallelPlanReason attribute. EstimatedDOPIsOne specifies that only one CPU core is dedicated to the SQL Server; for this reason, it generates a serial query plan.

Tip: Inserting data into the variable does not allow us to generate parallel query plans. In the following query, we will declare a table variable and then insert some rows to it. Also, we will enable the actual query plan and will analyze it.

For this query, we figured out that the query optimizer has created a serial query plan because the NonParallelPlanReason attribute indicates the CouldNotGenerateValidParallelPlan value. On the other hand, temporary tables allow creating parallel query plans when we insert to rows. Now we will execute the same query for a temporary table and interpret the query plan.

As seen above, inserting data into the temporary table allows creating a parallel query plan. This is the main difference between temporary tables and table variables in terms of parallelism.

In this article, we learned the factors that help query optimizer to decide when to create Parallel Execution Plans. The query optimizer takes into account three options when generating parallel plans as we have stated them above: