SQL Server replication is a relatively old high-availability solution part of the Microsoft world. In fact, there have not been any significant changes to this solution in the recent versions SQL versions, but it is still a widespread mechanism for distributing objects from one database to another and synchronize them. Replication is very useful when you have remote and mobile users accessing your data. Let’s cut to the chase and give you more details about our specific case. 🙂

Replication setup, that I am going to describe briefly, is a bit complex. We are using transactional type replications with two publisher instances and three subscriber instances. One of the busiest subscribers, holding five subscriptions, has been acting as a distributor as well. This has been the situation in the last years, but as the time goes and more and more data has been sending back and forth as part of the replication, the latency has been increasing and the IO subsystem was not able to serve us at the expected levels anymore. Our subscribers have been always in catching up situation with the publishers and the performance delay has already been below the critical limit. Problems with our high-availability solution has been resulting in:

In addition to this, our transactional replication has been setup in a way, that DELETE commands are not being propagated to the subscribers which means that we have a lot more data there than on the publishers: 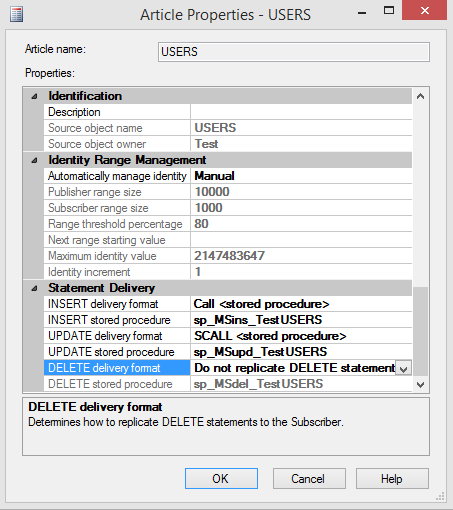 Due to this scenario, we are not able just to reinitialize the subscriptions if there are major problems with them or they just fall badly behind.

The cure to our situation was probably the very obvious choice to build a new SQL Server, include it in the replication topology and dedicate it to be acting solely as a distributor. The new high-availability schema would be: two publisher instances, three subscriber instances and one distributor instance. Luckily, we managed to convince all the important people involved, that this is the right solution for us and it has been approved. Next step, the actual work

Actual movement of the Distribution database

Initially this seemed like a piece of cake, but as we were going deeper and deeper into particular details, part of the implementation plan, this was not the case. We have read and tried literally tons of articles that we managed to find about moving the distribution database, but they were not working for us due to some reasons – either the posts were not described thoroughly enough and important details are missing or they were intended for more simple scenarios.

After countless numbers of tests, here are the particular steps, we have taken and worked for us:

Note that depending on the specifics in your environment, some of the steps might be a little bit different in some situations (for example based on type of subscriptions or whether you have a remote or local publisher).

Moving the distribution database is not that simple task as it looks like, especially in complex replication scenarios. Hope this article will help you do this task flawlessly next time you have to

In the last years, he is working on a great variety of customers' environments and involved in complex transitions and transformation projects.

Miroslav is also leading courses at Sofia University and participated as a speaker at various events.

View all posts by Miroslav Dimitrov