When a deadlock is detected, SQL Server then needs to select a victim of the deadlock.

However, users can set custom priorities for a particular transaction using the SET DEADLOCK_PRIORITY statement. The process with the lowest deadlock priority will then be the one chosen as the deadlock victim.

By default the priority for all the processes is normal. It can be set to LOW, NORMAL or HIGH. It can also be set to an integer value in the range of -10 to 10.

This is most easily explained by working through an example.

Let’s create some dummy data. We will use this data in our deadlock example. Execute the following script on your SQL Server.

First, let’s take a look at a practical example of how deadlock victims being selected based on their deadlock priority.

Script for the First Transaction:

Script for the Second Transaction:

This will create locks on table1 and table2. Now execute the second update statement from transaction1. This statement tries to access table2 which is locked by transaction2.

Finally, execute the second update statement in transaction2. This statement tries to access table1 which is locked and at this stage a deadlock will occur.

Now we know that by default, the deadlock priority for both of the transactions is NORMAL, therefore SQL server will select that transaction as deadlock victim which is least expensive to rollback.

After some time, you will see SQL Server select transaction2 as the deadlock victim and it will then roll it back as expected. The error message is shown in the following screenshot: 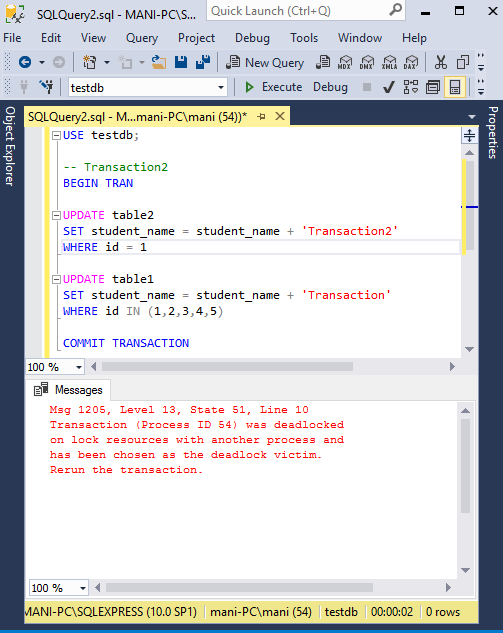 Now if you select the data from table1 you should see updated data as shown below:

In the next example, we will set the deadlock priority of transaction2 to HIGH and will again create a deadlock.

This time transaction1 will be selected as deadlock victim since it will have deadlock priority of NORMAL by default. Before we do that let’s clean our tables and re-insert the data into it.

Now again add some data in table1 and table2 by executing the following script:

Again, lets run two instances of SSMS in parallel and execute two transactions in them.

Now, repeat the same scenario as we did in the previous example and create a deadlock. This time you will see that transaction1 running in the first instance will be chosen as deadlock victim as shown in the following screenshot. 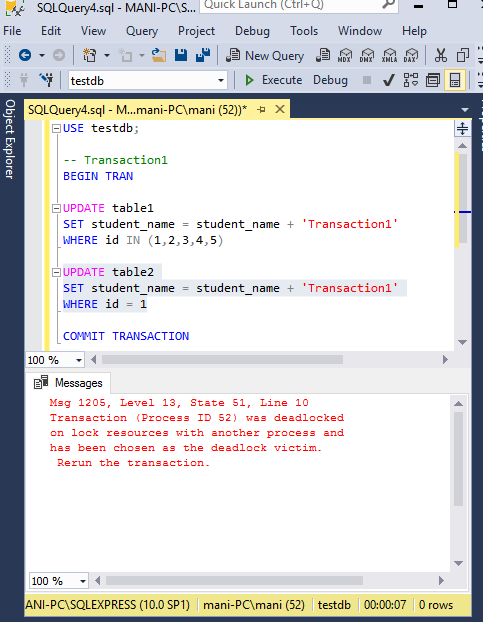