CPU pressure slowing down the server

However, if you are just interested in CPU pressure that’s okay. This piece can be also read independently. I only advise reading the whole sequel because everything is somehow connected. To kick-off, I always like to mention some symptoms as indicating a condition of CPU issues:

First of all, we have a great DMV called sys.dm_exec_query_stats that returns aggregate performance statistics for cached query plans in SQL Server. This DMV can be used in various ways. For example, it can be used for both finding a high number of recompiles and expensive queries.

So, let’s look at different ways this query stats is used as SQL Server monitoring tool. Paste the code from below and execute it:

Here you can see a selection from query stats where plan generation is greater than one. That’s just an indicator that a query has done more than one recompile. If it’s done more than one, there’s a good chance that it will continue to do so. Here’s my result:

In a production environment, you’ll most likely get a larger set of data.

Another way to use query stats is shown in the code below. This time, we’re finding the TOP 10 expensive queries. Paste the code in query editor and execute it:

Feel free to edit the TOP part and enter any desired number of queries that you want to be returned: 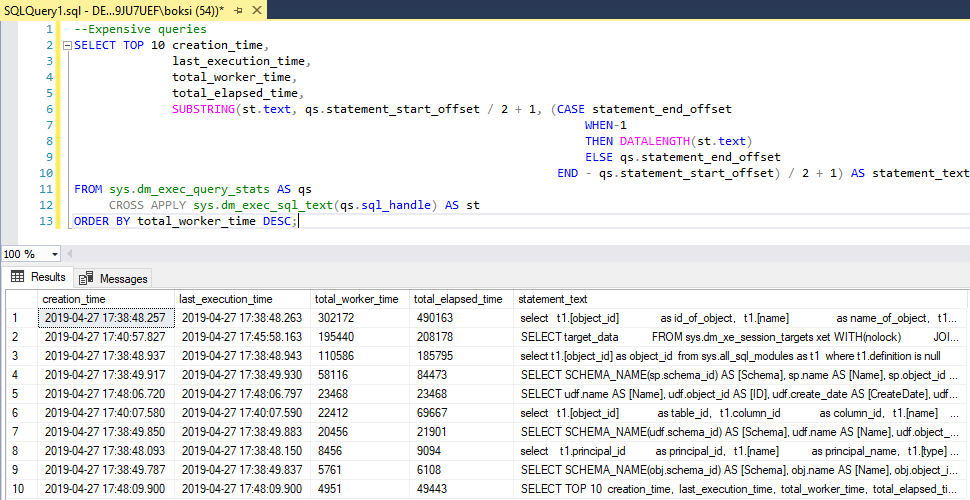 You’ll notice that both queries are identical except for what we’re selecting and in the second one we’re ordering by total worker time which essentially will return information about the TOP N queries ranked by processor time.

The Performance Monitor side, we have a few SQL Server monitoring tools AKA counters that can be used when troubleshooting CPU performance. The following counters are simple and easy to use:

Understanding processor time is not so difficult. Overall, this value should be less than 80 percent. The same rule applies for user time, and lastly, privileged time should be less than 30 percent. If any of these are above, it’s a good sign that we’re stressing out the CPU. Bear in mind that when troubleshooting CPU issues using any SQL Server monitoring tool, you should always take into consideration external factors as well not only the CPU that are causing extra cycles.

If we head over to Performance Monitor, we can quickly create another data collector set and add the above performance counters. I kept it running for about 10 minutes just to create data logs of counters we previously included. This time, I did not run the stress tool in the background because it would clearly create heat on my local machine and that’s not the point. The goal here is to identify if the CPU is under the pressure under normal circumstances. Here’re my results: 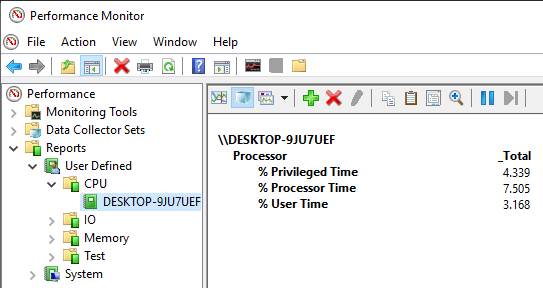 By looking at this report, we can see that privileged time is pretty good, the same goes for both processor and user time. All of them are in good shape. But then again, this in my local machine. The results on e.g. production server can be radically different. Look out for these counters not to exceed the numbers specified above.

Rather than writing another article in series about SQL Server monitoring tools, I want to briefly cover concurrency that I mentioned in the 1st article under the list of common performance issues. Concurrency is pretty much the easy one to troubleshoot. This is contractionary to what I wrote in the initial article when I said that it’s a tough nut to crack. Both statements are somewhat true. It all depends on how the concurrency manifests itself.

Some good symptoms of concurrency will be:

The last one is tricky because CPU, memory, and I/O can be in order, but people could still complain about performance issues which is a good indicator that we most likely have an issue with concurrency. Furthermore, this issue is probably coming from locking or blocking.

We got two DVMs to discover locks:

Performance Monitor side, we also got two counters:

These two combined will give a good sign if there’s some locking going on and how severe it is. I’m pretty sure that I don’t have any locking on my local machine, so I won’t even go to Performance Monitor, but the point is that those counters can be used as SQL Server monitoring tool when troubleshooting locking issues.

One last thing I want to mention is a troubleshooting strategy. It always helps when troubleshooting an issue on any level, especially performance problems to have strategy in place. That way, when a critical moment occurs, you’ll be able to approach the problem correctly. Here’s a list of what you should do and in which order:

I want to wrap things up with this 3rd chapter on SQL Server monitoring tools.

Hopefully, this series has been informative for you and I thank you for reading it.