So, to start with the definition, the UPDATE statement changes existing data in a table or view in SQL Server. Below is the full syntax for SQL Server and Azure SQL Database:

Don’t let the syntax scare you. We will be looking at the UPDATE statement using the minimum required syntax. The basic SQL UPDATE syntax comes down to using keyword UPDATE followed by the name of our object (table or table alias) and the SET column name equals to some values.

The FROM clause will come into play when we do joins and we can also have a WHERE clause when we need to update only a portion of data in a table. It goes without saying that using a WHERE in a statement is always a good idea or you might find yourself in a situation of updating every single record in a table.

The official documentation is a treasure trove of the UPDATE statement that will take you about 40 minutes to read but has everything that you need to know in one place.

In this section, we’ll be modifying data in tables from the AdventureWorks2014 sample database. However, before we start with a simple UPDATE statement, execute a quick-select from Product table:

The query returns all records from the Product table of items that are sold or used in the manufacturing of sold products. In this table, we have a column MakeFlag that can be either 0 or 1 as shown below:

After the execution, 1 row affected message will be returned indicating that the statement went through:

Before the query was executed, the Headset Ball Bearings product was purchased but now it’s manufactured in-house:

Let’s move on and look at another example to see how we can update multiple rows at once. This time, we’ll also use expressions from SQL UPDATE syntax which is a really handy way of setting a column equals to itself AKA doing something to a column on itself.

Use the query below to see what we have in the Employee table:

The Employee table has information such as salary, department, title, etc. but we’re interested in the number of available vacation hours:

We have a lot of different departments and job titles in the sample database, so let’s run another query and filter out some of the results by saying fetch everything where the job title is e.g. Quality Assurance Technician:

Here we can see that we have four people with this job title and their available vacation hours:

Let’s just say that those guys have been performing really great for the past three months and we want to reward them by giving them a 20% increase in vacation hours. To do that, execute the query below:

We should see a message that 4 rows are affected meaning records for those four people from the QA department have been updated:

We can check how this update reflected vacation hours by re-executing the quick-select from the Employee table. You’ll notice that vacation hours are increased by 20 percent:

Now, there’s another SQL UPDATE syntax that we can use to get the exact same result. Instead of saying column name = column name, we could use the expression which looks a little better, also more meaningful for some, as shown below:

This is just another way to use the SET statement from the SQL UPDATE syntax and specify the list of columns or variable names to be updated.

It goes without saying that you can perform arithmetic operators like addition(+), subtraction(-), multiplication(*) and division(/) on all numeric operands involved. For example, if you would like to undo changes and take that 20 percent back from the previous example, well then just execute the following:

After going through some basics, let’s see SQL UPDATE syntax on how to do updates based on joins. This can be a really neat thing to do because a lot of times when updating data in a table we need data from another table to make desitions on what you’re updating.

This can be tricky at first compared to joining stuff in a SELECT statement and it’s not always straightforward, but once you get familiar with the syntax it gets easier.

With that in mind, let’s forget the existing data in our sample database for a moment and see how to do updates using a join as simple as it gets. For this, we’ll need two new tables. Paste the code from below in the query editor and hit Execute:

We just created two empty tables on the dbo schema; Bank and SwiftCode:

I entered just a few records in both tables and if we do a quick-select from both tables, here’s how it looks: 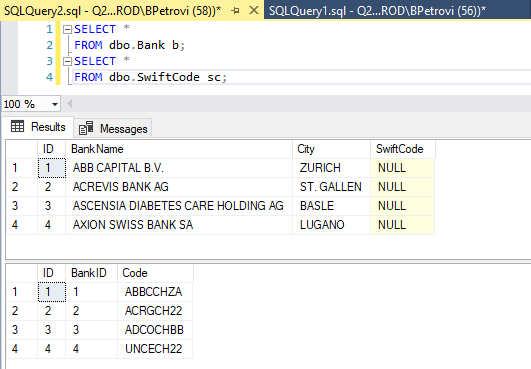 So, let’s look at the SQL UPDATE syntax below for achieving this:

Once executed, you should see a message that 4 rows are affected by this action:

This means that we just updated the table by using data from another table. Cool, right? If we query the Bank table one more time, here’s what we should have: 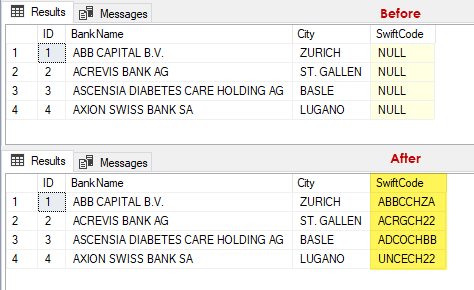 When working on a more complex query, the rule of thumb is to always write a SELECT statement first and to just join tables together. Why? Because when you use an UPDATE, everything after the FROM is the exact same. Furthermore, it’s highly advisable to use aliases or otherwise things can get a little funky, especially on complex queries no matter how familiar you’re with the SQL UPDATE syntax.

If you’re new to SQL and don’t quite understand what an alias is, by definition, aliases are temporary names to objects, so they’re easier to work with when writing and reading code. I, personally, use ApexSQL Complete which does this for me by automatically creating aliases to SQL tables and views with it’s Auto-generate aliases feature.

The UPDATE statement is one of the three big statements of the DML side of the T-SQL language that deals with data modification. By the end of reading this article, hopefully, you got familiar with the SQL UPDATE syntax; we saw some basics of the statement, and how we can do an update based on joins which is a very popular and common thing to do.

I hope this article has been informative for you and I thank you for reading it.