This article explains lock issues in SQL Server with DDL statements including SELECT INTO clause.

This article describes the side effect of having DDL within a long running transaction.

Data Definition Language (DDL) statements such as CREATE TABLE honors transactions. So if a BEGIN TRAN is specified, followed by a CREATE TABLE and then a ROLLBACK, then the table will not be created.

SELECT INTO works similarly to CREATE TABLE because it creates a new table with the columns returned by the SELECT statement. Under the cover, it begins an implicit transaction and populates the related system tables with the necessary rows to define the table structure same as a CREATE TABLE DDL.

When a DDL statement is specified within an explicit transaction, the underlying row(s) in the affected system table will be exclusively locked during this duration until the transaction is explicitly committed. 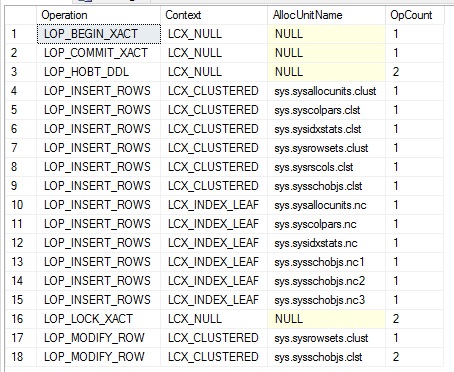 A wealth of information can be obtained from the transaction log using system function fn_dblog. The screenshot above shows us the system tables involved when a CREATE TABLE is executed.

LOP_BEGIN_XACT is the (implicit) begin transaction.

LOP_COMMIT_XACT is the (implicit) commit transaction.

Explicit Transaction and SELECT INTO

If we specify an explicit begin transaction, the SQL Server transaction log still logs this as LOP_BEGIN_XACT. A manual COMMIT TRAN will generate LOP_COMMIT_XACT similarly to an implicit commit transaction.

We will use SELECT INTO in this contrived example, because this is the more commonly used in SQL Server development.

We will start an explicit transaction and use SELECT INTO to create a temp table.

In the code example below, we have an explicit transaction name “tmp” which gets stamps into the transaction log to allow us to filter the result by [Transaction ID].

As expected, we can see the SELECT INTO started a transaction, but do not have a corresponding commit transaction (LOP_COMMIT_XACT) operation yet. It just means that the transaction is not committed yet.

The locks are against system tables in tempdb since the SELECT INTO automatically goes into tempdb as a temp table. This query below needs to be executed within the same session that started the transaction, otherwise the query will be blocked if executing on a different session.

If you want to execute the query from another session, then you need to set the new session isolation level to read uncommitted (Syntax: SET TRANSACTION ISOLATION LEVEL READ UNCOMMITTED) 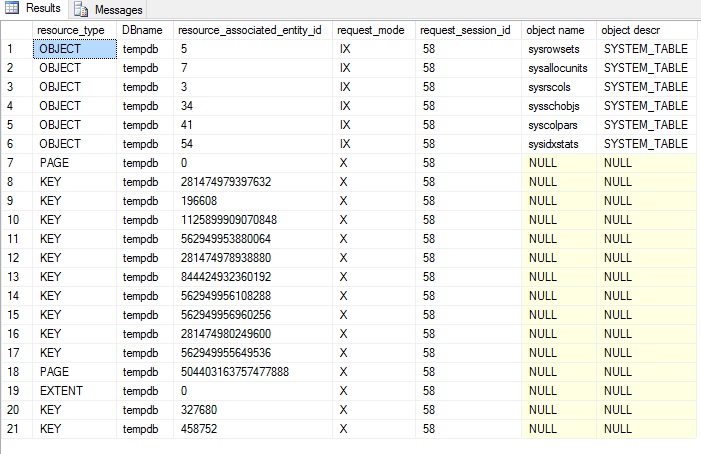 We will now perform a simple operation in SQL Server Management Studio (SSMS), checking the database properties of tempdb. 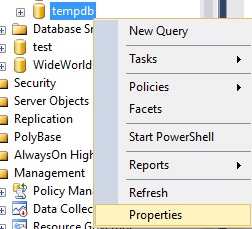 Typically the Database Properties form would show immediately. But in our scenario, SSMS would be in a “busy” state and not responding.

So, we will launch a new SSMS and execute the query below to check for blockings.

The output reveals that we have a blocking session id 58 which is executing the SELECT INTO query. The waitresource 2:327680 is system table sysrowsets in tempdb.

The Database Properties form is unable to launch because the query which calculates the database size is blocked. We might not be interested in checking tempdb database size, but this is one of the side effect when row(s) in system table are locked exclusively.

If you wait long enough, the error message below will appear.

The database integrity checks command comes back with an error because it is unable to obtain a lock on system table sys.sysrscols. This does not indicate a database corruption, although it gives the perception of something seems wrong.

We now commit the explicit transaction and execute database integrity checks again. The command will execute successfully and the output would indicate the system tables that CHECKDB requires to access in tempdb. 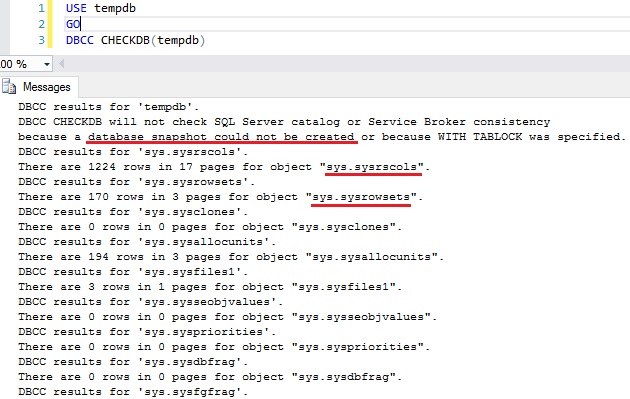 There are deployment utilities, which build objects by performing a series of DDL statements within a database. Some objects might take longer to be created and you might encounter a lock request timeout. For instance, if a CREATE PROCEDURE takes a long time to complete, will cause timeout when you try to expand the “Stored Procedures” nodes from SSMS.

DDL (including SELECT INTO) statements containing long-running explicit transactions, should be avoided if possible because it creates exclusive locks on row(s) in system tables for the duration of the transaction.

This might not cause detrimental effects, but often it misleads DBAs to think there was a network connectivity or SQL Server resource issue. If the code is not well written, you may encounter lock request timeouts when performing typical administrative tasks such as checking database properties from SSMS. In actuality, you are just experiencing typical locks and blocks on row(s) in system tables.

Simon has over 15+ years of database design, implementation, administration and development in SQL Server. He is a Microsoft Certified Master for SQL Server 2008 and holds a Master’s Degree in Distributed Computing. Achieving Microsoft masters-level certifications validate the deepest level of product expertise, as well as the ability to design and build the most innovative solutions for complex on-premises, off-premises, and hybrid enterprise environments using Microsoft technologies.

View all posts by Simon Liew