A transaction in SQL Server is a single unit of work in a database. We perform many transactions daily. In the real world, consider a banking transaction. Suppose you withdraw money from your bank account, you expect that it should get successful once you get money in your account. In case, you try to withdraw money, but after you are done with all formalities, due to a technical error, the amount got deducted from your account, but it did not reach out to you. In this case, the transaction should be rolled back, and the amount should reappear in your account.

Similar to the above scenario, consider you are executing a script on the production database that updates data in the existing table. Your developer missed putting a WHERE clause and it might mess your data. In this article, we try to find answers to the following questions.

Before we move further, you can refer to SQL Server Transaction Overview article, and go through ACID properties and transaction states. 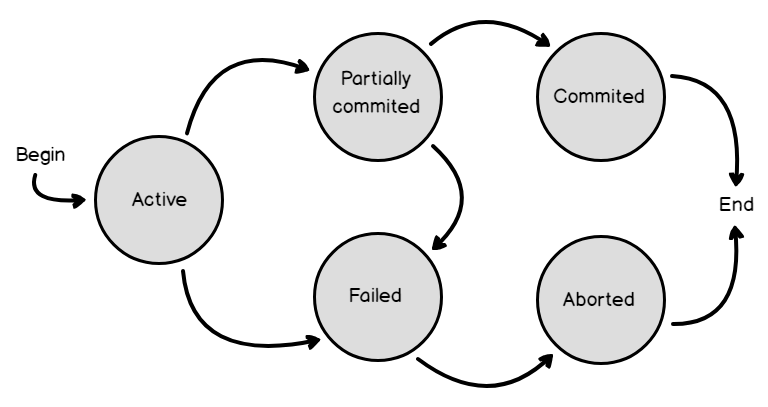 SQL Server default behavior is Implicit transaction. It provides auto commits functionality, so you do not require to issue a COMMIT TRAN statement. It is a convenient solution, and we can avoid open transaction issues such as session holding resources, but it is not committed.

In the filtered menu, click on ANSI, and you see option SET IMPLICIT_TRANSACTION mode is off. 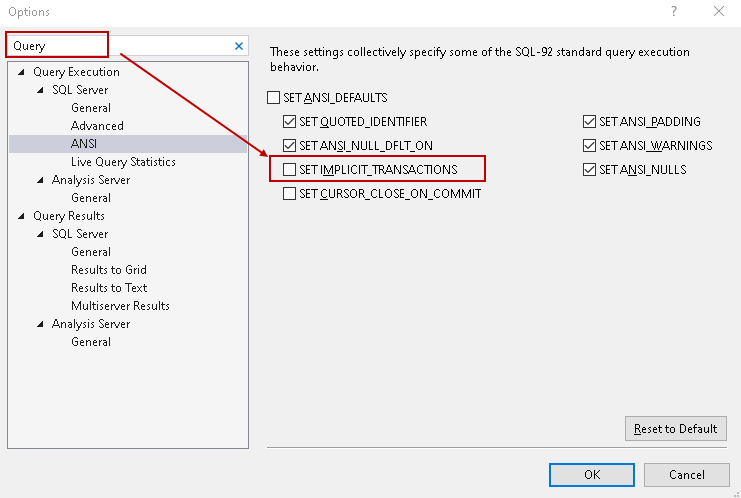 For example, we execute the below update statement and it auto commits data without asking for COMMIT or ROLLBACK statement.

Once SQL Server commits a transaction, you cannot run the ROLLBACK statement. Each rollback statement should have an association with the BEGIN Transaction statement.

Let’s go back to the SSMS option and in a new query window, use the option SET IMPLICIT_TRANSACTION ON before starting a transaction.

It commits a single row, and you get the output – 1 row affected. For my demo, this query uses the SPID 55.

In the output above, we see one open transaction for the SPID 55. Click on the hyperlink for locks, and you get currently held locks in an XML format.

Now, open a new query window and try to select the same records that we updated.

We did not commit update transactions yet, so the SELECT statement faces blocking.

Go back to the update session and commit the records to clear blocking. If we specify SET IMPLICIT_TRANSACTIONS ON in a transaction, SQL Server automatically starts a transaction for you and waits for your instructions to commit or rollback data.

You can check the status of an implicit transaction for a query session, using the below query.

In this mode, each code block starts with a BEGIN TRANSACTION statement, and it requires an explicit COMMIT or ROLLBACK statement. It gives the flexibility to decide whether you want to save changes performed by query or not.

We can achieve the transaction control using the explicit transactions similar to specifying SET IMPLICIT_TRANSACTIONS ON.

In the below query, we specify BEGIN TRAN, in the beginning, to specify an explicit transaction and roll back the updates.

In the below query, we have two transactions Demotran1 and Demotran2. We rollback the first transaction but commits the second transaction.

Let’s explore a few useful examples for the explicit transactions.

Suppose you started an explicit transaction that inserts a record in the demo table. Later, we want to rollback. This table has an identity column as well.

What would be the impact on identity column if we roll back a SQL Server transaction? Let’s explore it using an example. First, create the demo table with two columns [id] and [EmpName]. ID is an identity column for this table.

In the below query, we do the following tasks.

Let’s rollback this transaction and check the identity value. Once the rollback completes, SQL Server removes the data rows, but still, identity value is set to 4. If we insert a new row in the demo table, it gets the next identity value 5. 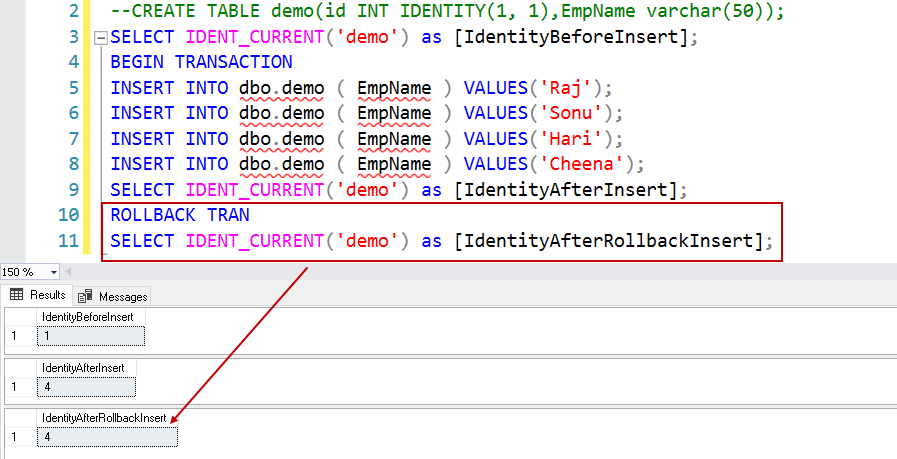 We use table variables as a particular table data type that you can use to perform intermediate tables similar to temporary tables. You can refer to An overview of the SQL table variable article, to know more about it.

In the below example, we do the following tasks. 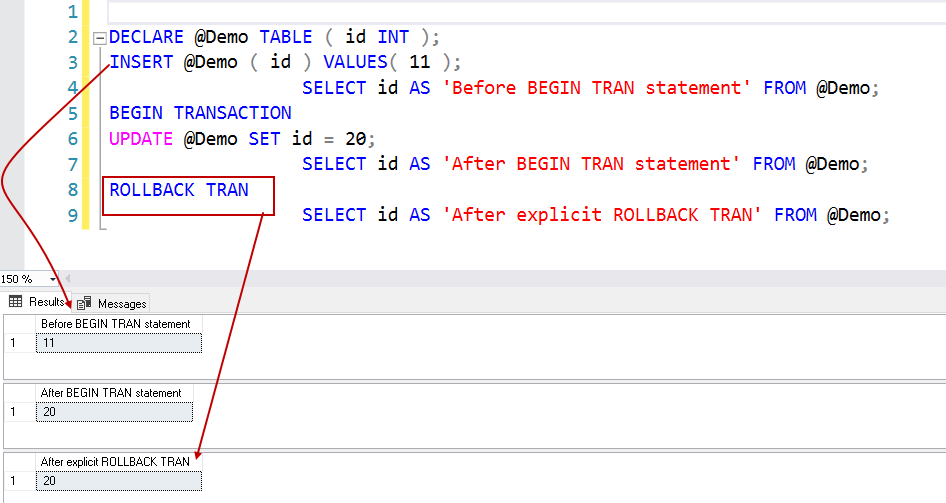 We can use the global variable @@trancount to track the open transactions.

In the below query, you can see how the value changes for the @@Trancount as per BEGIN TRANSACTION and COMMIT TRANSACTION statements for explicit SQL Server transactions. 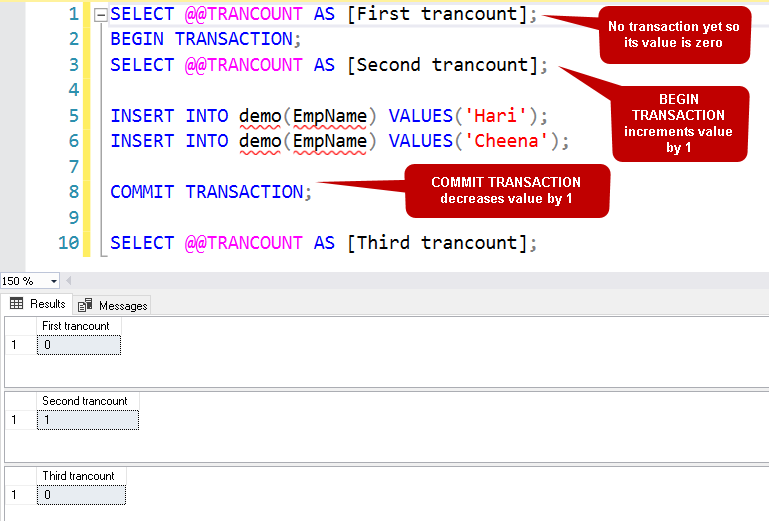 Let’s look at another example. Execute the following query and note the value of @@trancount.

In the below screenshot, note the following points.

In the below screenshot, we can see explicit transaction runs faster in comparison with the implicit transaction. You see a difference in the client processing time, total execution time and the wait time on the server replies. 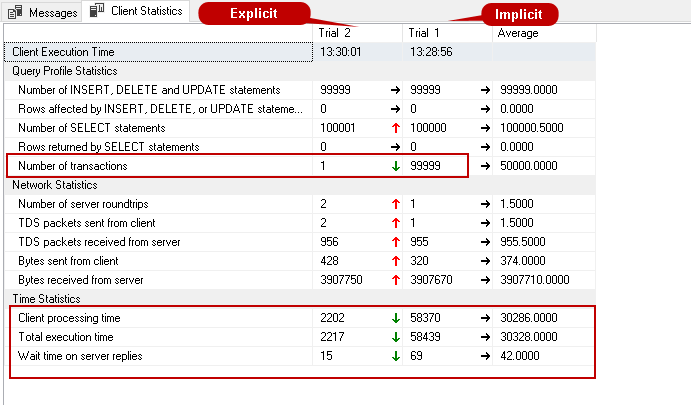 In this article, we discussed implicit and explicit SQL Server transactions. We can decide to commit or rollback a transaction in explicit mode. You should make use of explicit transaction, especially in the production environment where a minor mistake can lead to a significant issue. You should always have a proper data backup and recovery strategy before making production data changes.