So, we can conclude that the information contained inside the transaction log is valuable and maybe we could even take advantage of this information to answer questions like “Who is responsible for this table drop?” or “When did the operation occurred?” in order to recover a data alteration or data loss. Let’s explore which tools can help and what we actually can do with it…

Let’s say there is an issue: somebody dropped a table or deleted rows in a particular table and you want to get the version of those rows just before he dropped it. Well, you’ve well done your job and have taken backups but, in general, you can’t simply restore it (somewhere else than on the production database) and take back data because the time between the last backup and the moment when the person who did the mistake actually fired its DROP or DELETE query.

To be able to do it and being sure of the data we get back, we need to know precisely in which transaction the query was executed so that we can get a Log Sequence Number (LSN) and be able to use the STOPBEFOREMARK option of RESTORE LOG command like the code below.

How to get back information from the transaction log?

The first way to have access to information inside the transaction log is to use DBCC LOG(<DbName>) command. But as you will see in the figure below, we won’t go that far with its output: you don’t know anything about the object that has been impacted and it’s not really helpful in recovery.

You will find below a simple way to call it:

Here is a sample result. As you can see, the first columns are [CurrentLSN] and [Operation]. The former allows to know the log sequence number corresponding to the entry in transaction log while the latter tells the kind of operation that have been made. There is also a [TransactionId] column. So, we can tell what have been done for a single TransactionId and maybe. Two columns that are not displayed here but seem interesting is [AllocUnitId] and [AllocUnitName].

One more word about the way to call the sys.fn_dblog function is that, as written in the code sample above, you can’t use as a parameter the values returned by the function in the [CurrentLSN] column. The reason is that the [CurrentLSN] value is expressed in hexadecimal and the function takes decimal expressions of the LSN. So, you need to convert a [CurrentLSN] value before using it. There are multiple ways to do it: either using a website resource like BinaryHexConverter. To get it right, you will have to firstly split the [CurrentLSN] value into three pieces using the ‘:’ character as separator then convert each individual value using the website and finally concatenate everything with the ‘:’ character in the same order. The operation is quite the same if you want to use this LSN in conjunction with the STOPBEFOREMARK option of RESTORE LOG command: you still split the [CurrentLSN] the same way but concatenate differently. In fact, the difference resides in the fact that the second number is padded by leading 0 so that its length is 10 digits and the third number is padded by leading 0 so that its length is 5 digits.

As an alternative, you can use the bit of T-SQL code shown below:

So, basically, the transaction log contains information not only on DML and DDL operations but also on SQL Server internal operations like a checkpoint, a buffer write or a page split. But it has a limit as explained above. Let’s prove this with this simple example.

The figure below is the output of the batch presented above. 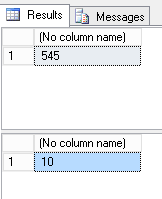 You should see a tremendous reduction in the number of returned values. For me, it passed from 545 to 10. This means that the inactive part of the transaction log which tracked the transactions has been dumped to a backup file and the original entries from the log file have been flushed which means the log truncation can occur to reduce space consumption inside the transaction log.

You will find demos later. Those demos are a step by step procedure to recover data after a DELETE or DROP operation has occurred using sys.fn_dblog function.

Before jumping to the other function, you will find another query below which just lists committed DML operations. You can customize it to get some other information:

How to get back information from a transaction log backup file?

And the winner is:

We need to convert this value to decimal using one of the methods described previously and only consider the result for STOPBEFOREMARK option usage. In his case, the value to use is 32000000023100001

By the way, at the same time, we get a [TransactionSID] column which tells us which database user ran the DELETE statement.

We can get to know it by running the following query:

This can be a plus to ensure that it was the good DELETE statement we considered so far.

So, basically, we have the value to use during the last log restore. We have to first restore a full backup media to another location and database with NORECOVERY option enabled then successfully restore logs until the LSN is the expected boundary i.e. 32000000023100001

If we had not found the corresponding operation with sys.fn_dblog, we would have used sys.fn_dump_dblog with the last transaction log backup media the same way we did.

Once we have all the transaction log backups needed to recover, we can start restoring. An example code sample is provided below:

If we take a look at the content of City table, we will see that the rows we deleted are present.

The query to check:

In summary, we’ve found the transaction that did the DELETE operation (this is the hard part of the work in production environment where DELETE statements can occur regularly against multiple tables). Then we got back the LSN corresponding to the beginning of the transaction that contains the DELETE statement. We translated this LSN to a decimal padded value and restored to that LSN in another database. The next step would be to export the deleted rows from the restored database to the actual production database.

Use case 2: Discover LSN corresponding to the start of a table drop operation

As the instructions to restore to a given LSN we get back from sys.fn_dblog and sys.fn_dump_dblog functions, this section will only address the question to retrieving the starting LSN of a transaction which dropped a table.

So, let’s get started by dropping the City table:

Let’s look for drop operations in the transaction log. This can be achieved using the following query.

Well, all the demos I’ve seen on the internet which show this operation only have one row returned. This means only one object has been dropped since last log backup. The authors tell then “ok, we have the LSN, restore to that LSN and everything is gonna be alright.” But, it’s not representative of a true production system where there can be multiple object drops between two transaction log backups, or where the application uses tables for storing kind of “sequence numbers” and drops it daily (seriously, we have an application that does it here). Plus, in my experience, the DBA is rarely called directly after such an error.

Here, we have two rows returned.

Fortunately, we can segregate thanks to the [BeginTime] column in our case (we take the last one). If you remember the previous use case, we also segregated on the [AllocUnitName] column, but this column is null for every row returned. This means that, in some cases, we cannot know with exactitude which [CurrentLSN] value should be taken, but I’ve not seen this warning anywhere on the other demos…

I’ve tried different things but except if you know the Object_ID previously used by the object in the database, it’s more or less impossible to know with precision the right [CurrentLSN] value to be used.

So, to me, it’s more a “guess and check” process than a straightforward step by step procedure. But, when you have a very big database, it’s practically impossible due to the time needed to restore.

By the way, here is a sample code, given as is which extracts information on the object_id of the dropped objects: