In an ideal replication set up, we have a publication server, distribution server, and a subscriber server (see the below image). 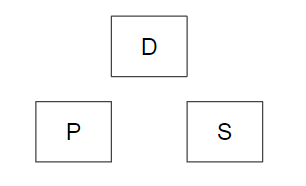 The reason for this design is scale from the beginning, especially if we’re replicating large data sets for analysis, as we can scale out publishers if we horizontally distribution publications and we can reduce the load on an individual distribution database. Companies looking to reduce or cut costs might want to consider using Microsoft Azure SQL for subscriptions to publications. Another helpful way to reduce costs is considering what version of SQL Server you’re using for the distributor, publisher and subscriber – for an example, if your heaviest analysis is on your subscriber, you might want to think about making sure it’s build to handle that load. 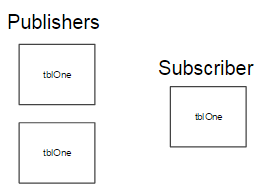 We will see primary key errors in the replication error log because the primary key is identical and we’re attempting to duplicate the data. I’ve seen this issue before where DBAs simply added replication on a target that already existed, and the errors flooding the log caused a tie up in the distribution database. This may also occur when a destination table receives data from two identical source tables that are on different servers; we will see in the subscriber folder the sources and can track which publications may be sending duplicate data.

Similar to the above issue, another error I’ve seen with replication that also involved poor architecture was replicating the same publisher table twice using different columns in each case to two different destinations on the same database, yet using the same underlying stored procedures. If we’re going to use stored procedures to replicate data, then we have to think about either naming them in a way that the stored procedure name is unique (including destination database, schema and table name in their name), or we may want to consider an alternate way to replicate the data – like direct inserts, updates or deletes. If we don’t, consider that the same named stored procedure will try to copy two different column data sets over to two different tables, and yet this is wrong. Typically, in these cases we’ll see data failures and skipped records and finally a publication going inactive. When we look at the stored procedure, we may realize that the definition doesn’t match one of the tables. 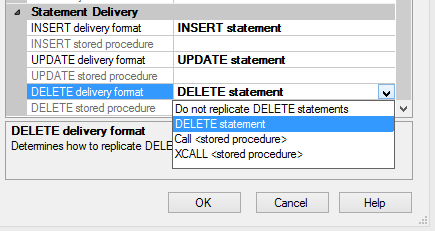 In the above image, we see the direct insert, update and delete statements are selected as the data flow method; we could also use procedures as a data flow method – though each method will come with advantages and disadvantages.

I do not like the idea of replicating the same table with a different column set of the table to the same subscriber (though there are exceptions in cases where the two together are significantly less than the full table as a whole), so I’ll generally push back on this and replicate the full table along with two views that will pull part of the table, or use Entity Framework for a select.

Other issue involves using DELETEs over drop-and-recreate or TRUNCATEs. I do not have any problems with using DELETEs, as there are situations where it is the only way to eliminate data, as inconvenient and slow as it is. DBAs who use these over the other methods must first understand what overhead will be added by using them and must optimize for them, otherwise they will experience issues.

Some useful tips and questions

First, always verify that what you’re planning to replicate doesn’t already exist. This is a very basic step in replication and it helps avoid flooding the error log with a meaningless error that reflects a misunderstanding of replication. In addition, adding replication to the exact same destination from the exact same source is wasteful. This would be like trying to create a database that already exists and getting upset when it fails – if it already exists, use it. The below basic query will tell you if you have a duplicate article being replicated to the same database schema and table on the same server – you would need to expand this on all publisher servers if you want to track across multiple servers:

Second, DBAs should question whether replication needs to be added in the first place, as there are situations where other tools exist and are superior. For an example, timed-loads might be better with ETL. In the case of replicating the different column set of the same source table to the same destination database, how much do the two sets add in comparison to the full set of data, and why is that the choice over replicating the full table with two views, or allowing Entity Framework to select a different column set for the report or application? These architecture questions can save a lot of time when troubleshooting later. If something sounds wrong or redundant, always push back, as most redundancy is misunderstanding the problem.

Third, when using DELETEs over other methods, DBAs should do the following:

Many replication problems occur because of poor architecture and the same is just as true with custom made ETL design. If an environment commits to using replication, I’d suggest thinking about the design, being strict about the objects that are replicated and building validation steps both before and after replication processes. Without all of this in place, replication won’t be a solution, but a problem.