In the case where one of the queries in a group of queries executed by a transaction fails, all the previously executed queries are rollbacked. Transactions in the SQL server are rollbacked automatically. However, with the rollback SQL statement, you can manually rollback a transaction based on certain conditions.

In this article, you will see what a transaction is and how it can be rollbacked both manually and automatically.

First, let’s create a dummy dataset for you to practice on unless you are 100% confident that your database is fully backed.

Let’s now add some dummy records in the Books table:

The above script adds 10 dummy records to the Books table.

Look at the following script:

In the script above, we execute three queries. The first query inserts a new record in the Books table where the id of the record is 15. The second query updates the price of the book with id 15. Finally, the third query deletes the record with id 15. If you execute the above query, you should see the following error:

The error is pretty self-explanatory. It says that we cannot assign the string value ‘25 Hundred’ to the ‘id’ column, which is of integer type. Hence, the second query fails to execute. However, the problem with the above script is that while the second query fails, the first query still executes. You can verify this by selecting all the records from the Books table, as shown below: 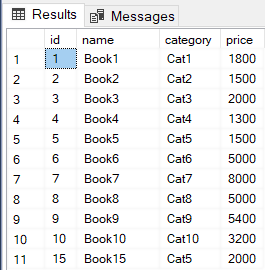 What if you really want is that if the second query fails, the first query should be rollbacked as well so that you go back to how you were before you executed the queries?

To achieve this, you need to use transactions.

As I said earlier, if one of the queries in a group of queries executed inside a transaction fails, all the previously executed SQL statements are rollbacked. Let’s see how transactions can be used to rollback SQL queries:

In the script above, we execute the same three SQL queries that we did in the last section. However, this time the queries have been executed inside a transaction. Again, the first query will execute successfully and an error will occur while executing the second query. Since the queries are being executed inside a transaction, the failure of the second query will cause all the previously executed queries to rollback. Now, if you select all the records from the Books table, you will not see the new record with id 20, inserted by the first query inside the transaction.

In that case, you can use the rollback SQL statement.

Look at the following example:

In the script above, we declare a variable @BookCount. Next, we create a transaction named AddBook. To create a named transaction, you simply have to pass any string name for the transaction after the BEGIN TRANSACTION statement.

Inside the transaction, a book with id 20 and name Book15 is inserted in the Books table. After that, the COUNT function is used to count the Books with the name Book15.

If the count is greater than 1, that means a book already exists with the name Book15. In this case, the rollback SQL statement is used to rollback the AddBook transaction manually; otherwise, the transaction will be committed and an appropriate message is displayed to the reader.

You can see that the syntax of the rollback SQL statement is simple. You just have to write the statement ROLLBACK TRANSACTION, followed by the name of the transaction that you want to rollback.

Now, try to run the AddBook transaction to insert the record where the name is Book15 (make sure that no book with this name already exists in the Books table).

You will see that the transaction will execute successfully, and the following message will be displayed to the reader: