On the EC2 based SQL Server, DBAs are responsible for performing database upgrades, patching, applying cumulative packs. In this article, we discuss the minor and major version upgrades for AWS RDS SQL Server.

In the minor version upgrades, the changes are backward-compatible with an existing application and do not deprecate any existing functionality.

We can apply both minor and major version upgrades to the supported AWS RDS SQL Server. Once you deploy an RDS SQL instance, you might have noticed an option- Enable auto minor version upgrade. As per its definition, if we enable this functionality, AWS automatically upgrades the minor version during the maintenance window for the database.

According to AWS documentation, AWS RDS SQL Server doesn’t support automatic minor version upgrades even if we have enabled the feature. We need to upgrade the minor version as well manually.

In the article, Learn AWS CLI: An Overview of AWS CLI (AWS Command Line Interface), we configured the command-line interface (CLI) for AWS resources. Configure a CLI profile and run the following command:

In this command, specify the following parameter as per your RDS instance.

You can refer to SQL Server versions supported in RDS for this.

The above AWS CLI command returns the false value for Auto Upgrade even if you have enabled the feature. It verifies that you have to upgrade an RDS minor and major versions manually. 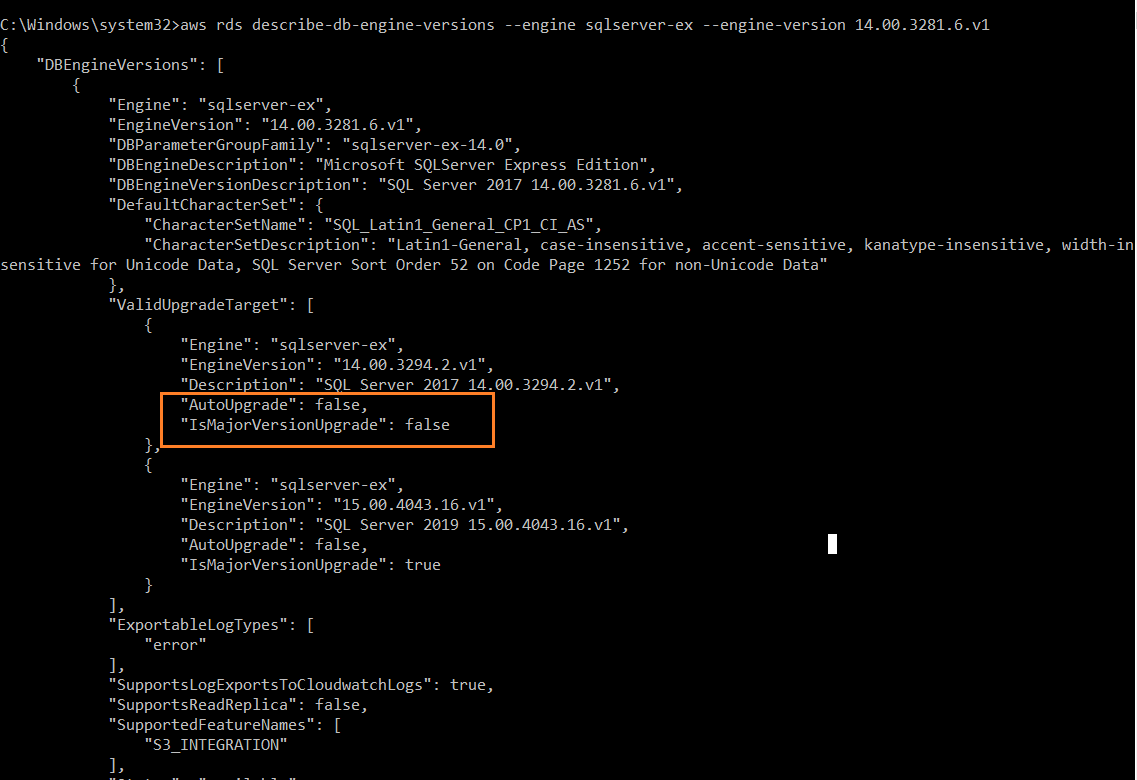 AWS takes two database snapshots during the upgrade of both minor and major version upgrades.

In the below image, we get the overall process for upgrading an AWS RDS SQL Server.

You can upgrade following major upgrades in the AWS RDS SQL Server similar to the on-premise SQL instance.

While planning for a database upgrade, you need to know the supported AWS RDS SQL Server versions that you can upgrade.

You can check the supported upgrade path in the following ways.

Let’s assume we require to perform a major version upgrade from SQL Server 2017 to SQL Server 2019. For this purpose, modify the existing RDS instance, choose the required upgraded version. 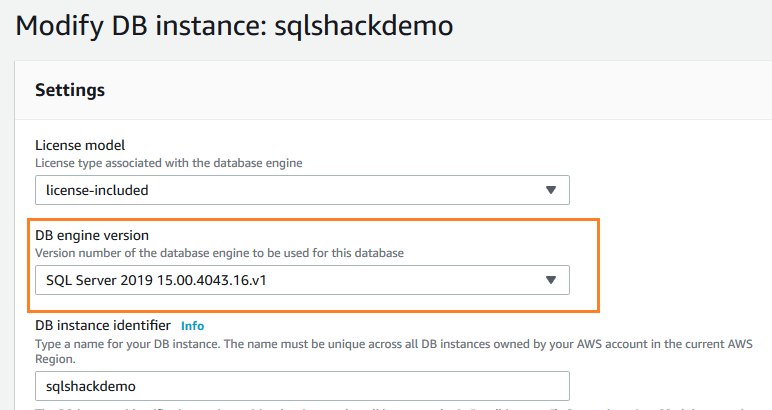 You can plan to upgrade immediately or during the maintenance window. Review your changes and click on Modify DB Instance for performing upgrades.

You can use the AWS CLI for DB upgrades as well. Let’s use this method in this article. In the below CLI command, specify your source RDS instance identifier, target engine version, argument allow-major-version-upgrade and apply-immediately. In case you want to upgrade during the maintenance window, use the argument –no-apply-immediately.

When I executed the script, it failed with the following error message.

Before I upgrade my RDS to SQL Server 2019, I need to modify the instance type. As shown below, I upgrade it to db.t3.small from the db.t2.micro. 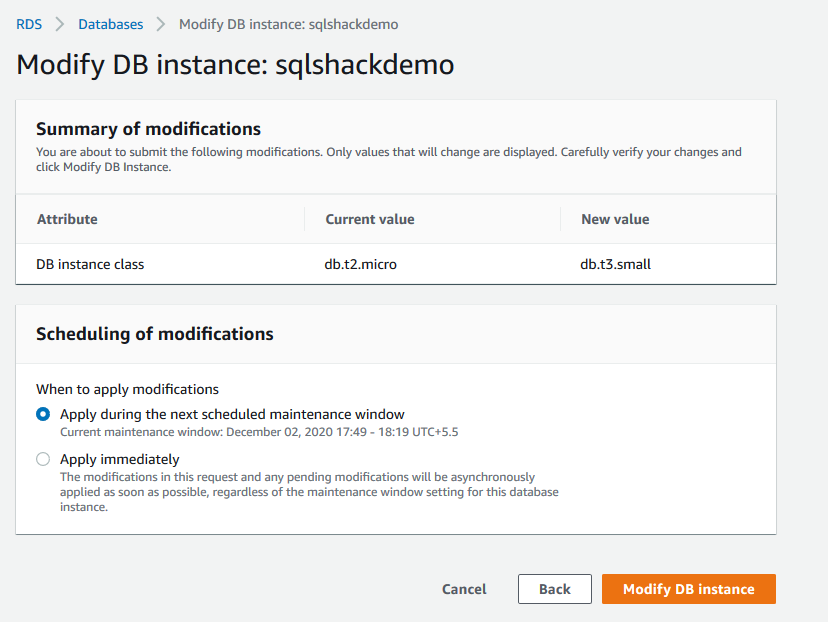 Apply your changes immediately; it takes a few minutes for DB instance upgrade.

Once the RDS instance is in available status with the new instance type (db.t3.small), rerun the AWS CLI command for a database upgrade.

This time CLI command works fine, and it returns the following output in the JSON format. 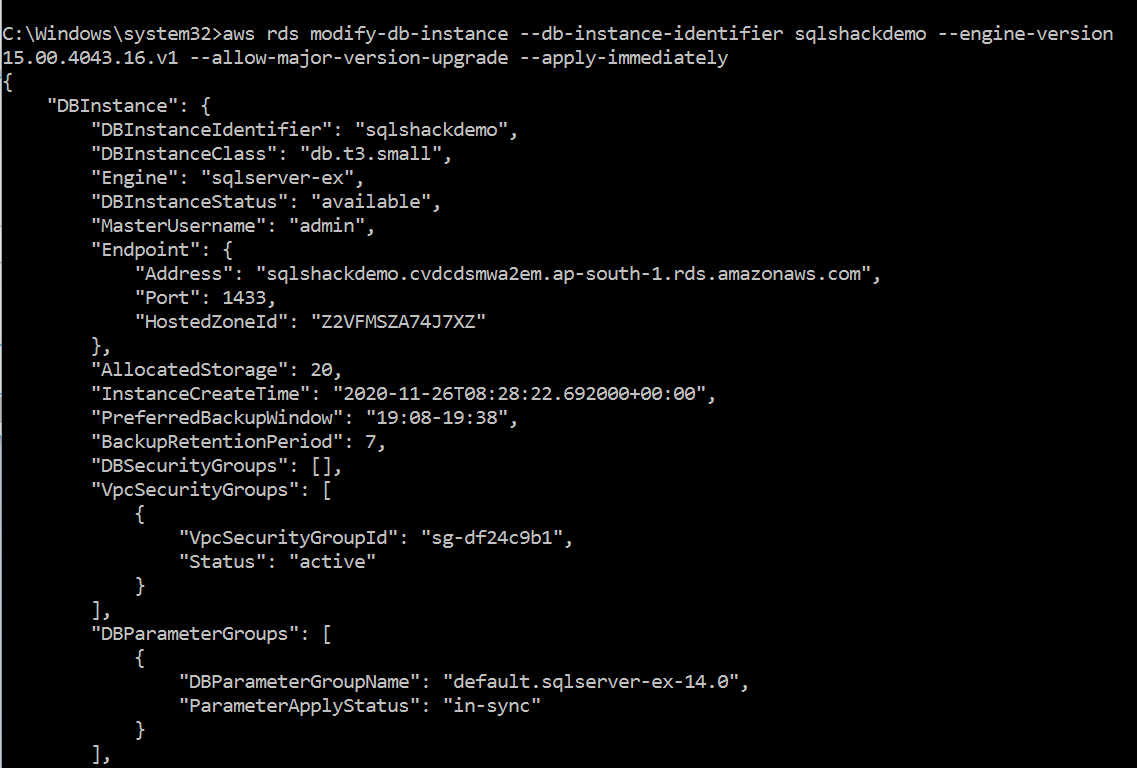 In the below image, note-down the following information

Therefore, you should note down your existing configurations before upgrading RDS, create new options, parameter groups as per your targeted SQL version, edition and modify targeted RDS to use them. 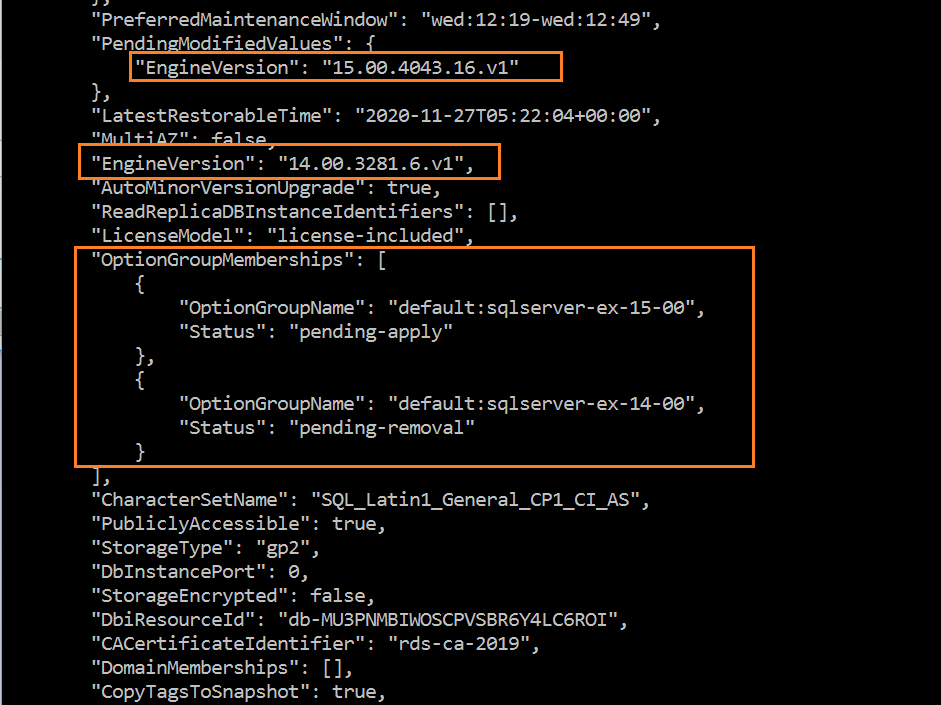 Refresh your RDS dashboard and status changes from Available to Upgrading, as shown below. We cannot access the database while an upgrade is in process.

Once the AWS RDS SQL Server upgrades to SQL Server 2019, connect it using SSMS and run quality assurance tests, application validations to be sure that everything is working per your expectation.

In this article, we explored the minor and major version upgrades for AWS RDS SQL Server. You should plan the upgrades with application compatibility, compatibility level, deprecated features, enhancements. You can plan to upgrade the development databases first and move to production once everything remains perfect.