SQL Server 2008 introduces a new column attribute that is used to reduce the storage consumed by NULL values in the database tables. This feature is known as Sparse Columns. Sparse Columns work effectively in the case of the columns with high proportion of NULL values, as SQL Server will not consume any space storing the NULL values at all, which helps in optimizing the SQL storage usage.

Let’s have a small demo to understand the Sparse Columns feature practically. We will start with creating two new tables in our SQLShackDemo test database with the same schema, except that the Emp_Last_Name , Emp_Address, and Emp_Email columns on the SPARSEDemo_WithSparse table are defined with the SPARSE attribute as follows:

You can also define a column with SPARSE property using the SQL Server Management Studio tool. Right-click on the target table and select the Design option, then select the column you need to define as Sparse Column and change the Is Sparse property from the Column Properties page to Yes as in the below figure:

The Is_Sparse property can be checked by querying the sys.objects and sys.columns system tables with the columns with is_sparse property value equal 1 as in the below query:

The two tables are created now. We will use the ApexSQL Generate tool to fill the SPARSEDemo_WithoutSparse table with 100,000 records after connecting to the local SQL Server instance as follows: 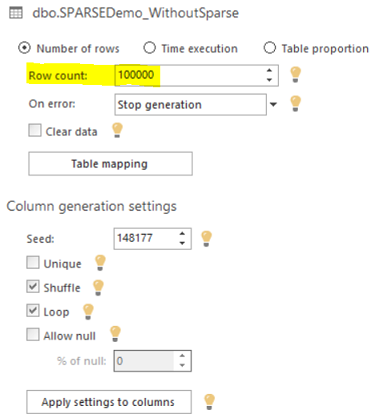 Using the sp_spaceused system object to check the storage properties for the two tables:

The previous shocking numbers meet what we mentioned previously, that the non-NULL values on the Sparse Columns will consume extra 4 bytes for each value, resulting more space consumption.

Let’s update the Emp_Last_Name , Emp_Address and Emp_Email columns to have a high percentage of NULL values on both tables with and without Sparse properties:

The percentage will be similar to: 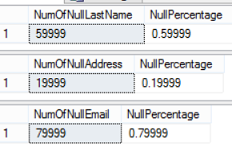 If you run the previous sp_spaceused statements again to check the space usage after the update, you will see no space consumption change on the table with no Sparse Columns, but you will notice a big difference in the case of the table with Sparse Columns due to high percentage of NULL values:

If we change the Sparse Column property of the Emp_Address column in the previous example, and check the space consumption after the change, the numbers will show us that having this column as Sparse Column is worse than having it a normal one as below:

Again, if we try to change all the Emp_Last_Name , Emp_Address and Emp_Em columns values to NULL:

When trying to Select Top 1000 Rows from the database table with Sparse Columns, SQL Server will retrieve only the non-Sparse columns: 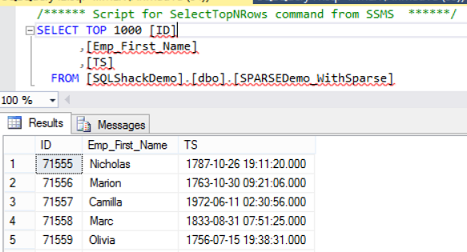 As retrieving the non-Null values from the Sparse columns will slow down the query. If we try to run the previous SELECT statement retrieved from the SSMS that excludes the Sparse Columns and the SELECT * statement after turning the STATISTICS TIME ON:

You will notice clearly the performance overhead that is resulted from reading the Sparse Columns with non-NULL values as below: 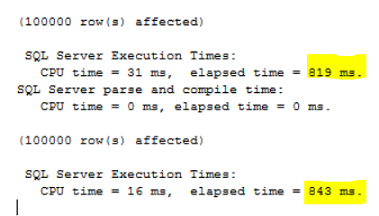 We will first define the ID column in our sparse demo table as Primary Key:

If we try to run the below simple SELECT statement from the SPARSEDemo_WithSparse table and check the query execution plan and time and IO statistics:

The result will show us that SQL Server scans all records in the clustered index to retrieve the data, performs 759 logical reads, consumes 16 ms from the CPU time and takes 52 ms to finish:

If we try to run the previous SELECT statement after creating the index, an index seek will be used on the table to retrieve the data, performing only 5 logical reads, consuming 0 ms from the CPU time and taking 41 ms to finish. With clear variation from the statistics without using that filtered index:

The Column Set can’t be added to a table that contains Sparse Columns. If we try to add a new Column Set to our Sparse demo table using the below ALTER TABLE statement:

SQL Server will not allow us to create that Column Set on that table that already contains Sparse Columns:

To create the Column Set successfully, we will drop the table and create it again after taking the backup from the existing data to a temp table:

Assume that we filled the table again from the temp backup, if we try to SELECT data from that table, the result will contain additional column in XML format that contains all Sparse Columns values as follows:

You can also check the Column Set value in more readable format by clicking on the XML blue value which will be displayed in separate window as the below:

To see how we can take benefits from the Column Set, we will change the Emp_Last_Name and the Emp_Email of an employee with ID 45531 from the ColumnSet XML column in one shot and check if this change will be replicated to the source Sparse Columns. Let’s first check the values before the update:

Now we will perform the update by adding the “phill” to the last name and the last part of the email using the below update statement:

If we retrieve that employee’s information after the update, in addition to the Emp_Last_Name and Emp_Email columns individually:

The result will show you that, the single update statement we performed to that employee Column Set column is reflected on the Sparse Columns as follows:

Sparse Column is a very efficient feature that can be used to store NULL values in a database table with a high NULL values percentage. Combining it with the filtered indexes will result in a performance enhancement to your queries and smaller non-clustered indexes. Together with the Column Set, Sparse Columns can be retrieved and modified in one shot, displayed in XML format and extends the number of columns per table limitation. Be careful when you use these features; as it is a double-edged sword; if you test it well and make sure that it will suit your case, you will get the best performance, otherwise it may cause performance degradation and consume your storage.