Before going through the main concern of this article, indexing the foreign key columns, let’s take a small trip back to review the SQL Server Indexes and Foreign Key concepts.

A SQL Server index is considered as one of the most important performance-tuning factors. They are built on a table or view in the shape of the B-Tree structure to provide a fast access to the requested data, based on the index column’s values, speeding up the query processing. Without having an index in your table, the SQL Server Engine will scan all the table’s data in order to find the row that meets the requested data criteria. You can imagine the table scan as reading all the book pages in order to find a specific word, where the book index will help you in finding the requested information quickly.

Creating a suitable index is not an easy task, as you need to balance between the need to speed up the data retrieval process and the drawback of the index creation on the data insertion and modification processes. You need also to make sure that the index size is as small as possible, due to the disk space that will be consumed by the index, in addition to the index maintenance overhead. So, it is better always to test index efficiency on a development server before performing that change in the production environment.

A Foreign Key is a database key that is used to link two tables together by referencing a field in the first table that contains the foreign key, called the Child table, to the PRIMARY KEY in the second table, called the Parent table. In other words, the foreign key column values in the child table must appear in the referenced PRIMARY KEY column in the parent table before inserting its value to the child table. This reference performed by the foreign key constraint will enforce database referential integrity. You may recall that the PRIMARY KEY is a table constraint that maintains the uniqueness and non-NULL values for the chosen column or columns values, enforcing the entity integrity for that table, with the ability to create only one PRIMARY KEY per each table. You can include the foreign key creation while creating the table using CREATE TABLE T-SQL statement or create it after the table creation using ALTER TABLE T-SQL statement.

When a PRIMARY KEY constraint is defined, a clustered index will be created on the constraint columns by default, if there is no previous clustered index defined on that table. So, we can expect that everything is configured well at the parent table’s side. The case may differ with the foreign key constraint at the child table’s side, where no index will be created on the constraint keys automatically, and it is the database administrator’s or developer’s responsibility to create the index on the child table manually.

It is highly recommended to create an index on each foreign key constraint on the child table, as it is very common when calling that key on your queries to join between the child table and the parent table columns, providing better joining performance. Indexing foreign key columns also help in reducing the cost of maintaining the relationship between parent and child tables that is specified by the (CASCADE) or (NO ACTION) option. This option comes into play when an UPDATE or DELETE operation is executed, by speeding up the process of retrieving the common reference values that the action will be performed on.

Let us see the benefits of indexing the foreign key columns practically. We will create four tables under the SQLShackDemo testing database, with the relations specified by the database diagram shown below:

The relations between the tables shown in the previous database diagram can be summarized as:

The T-SQL script below is used to create the four new tables with the three foreign key constraints described previously:

The tables are created successfully now. To have a fair testing scenario, we will fill these tables with testing data using ApexSQL Generate as shown below: 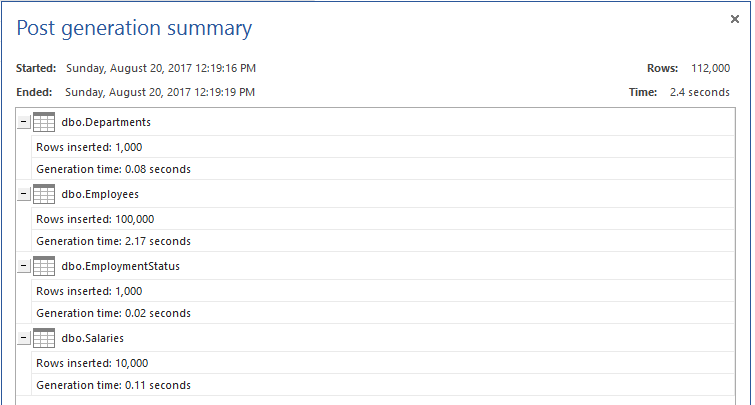 Once the tables are filled with synthetic test data, we will run a SELECT query that joins the four tables together using the foreign keys columns to retrieve data from the Employees table that meets specific criteria. We will start with enabling IO and TIME statistics for performance comparison purposes. We will also free up the procedure cache each time we run the SELECT query to make sure that a new plan will be generated with each run. The T-SQL script to achieve that is as shown below:

Also, the execution plan generated from the previous query using ApexSQL Plan, shows that a Clustered Index Scan is performed on both Employees and Salaries tables in order to retrieve the requested data, consuming the highest weights from the overall query weight as shown in the execution plan below:

From the previous execution plan, you will find a number of suggested indexes, in green, that SQL Server found that may enhance query performance. You can clearly see that these suggested indexes are on foreign keys columns. It is better always to handle suggested indexes carefully, and make sure that it will speed up the queries without causing any side effects.

In addition to the suggested indexes warning provided within the execution plan, we can search for all the foreign keys columns in all the database tables that are not indexed yet. In order to create indexes on these columns. What we will do is:

Gathering all together, the below T-SQL script can be used to retrieve all foreign keys that columns are not indexed yet:

The result will show that no index found on the three foreign keys created previously:

Let us create the below two indexes that include the foreign key columns on both the Employees and Salaries tables using the T-SQL script below:

Then try to run the previous SELECT statement again, to check if these two new indexes will enhance the query performance.

Checking the execution plan that is generated from the previous query after creating the indexes, using ApexSQL Plan. You can clearly see that a much faster index seek process is performed on both the Employees and Salaries tables in order to retrieve the requested data instead of the Clustered Index Scan performed previously, as shown in the execution plan below:

When you define a foreign key constraint in your database table, an index will not be created automatically on the foreign key columns, as in the PRIMARY KEY constraint situation in which a clustered index will be created automatically when defining it. It is highly recommended to create an index on the foreign key columns, to enhance the performance of the joins between the primary and foreign keys, and also reduce the cost of maintaining the relationship between the child and parent tables. Before adding any new indexes, it is better to test on a development environment and monitor the overall performance after the implementation, to make sure that the added indexes improve performance and do not negatively impact the system performance.