Azure SQL Database is a cloud database hosted on Microsoft’s Azure platform. It is an enterprise-grade database service that supports a wide range of advanced features, and it can be used to store and process data. Customers can migrate data from an on-premises SQL Server without downtime and minimal disruption.

This article teaches about the migration of encrypted columns data from on-premises to Azure SQL Database.

IntroductionIn the digital era, an organization needs to protect itself from data stealers. It requires protection of your infrastructure, including servers, databases, networks, firewalls. Database encryption is also helpful to protect data if someone(hacker) gets data access to sensitive data such as PII data, credit card numbers, bank account numbers. It obfuscates existing data using certificates, keys, or passwords. Therefore, the data is helpful unless a person decrypts it using the same encryption method. 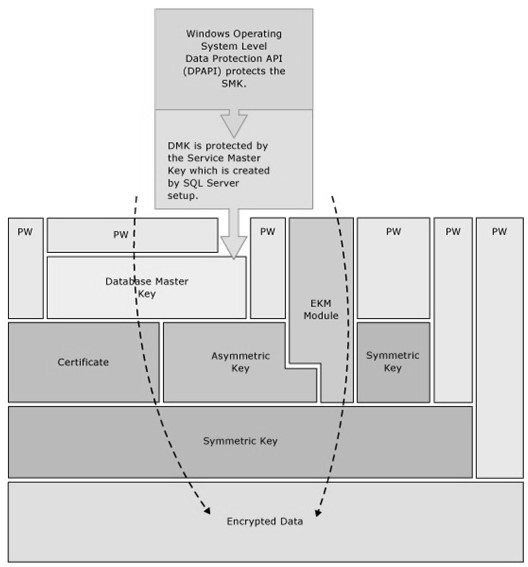 As shown above, it has a combination of certificates, symmetric and asymmetric keys. Let’s understand these terminologies in short.

For this article, I am using SQL Server 2019 (on-prem SQL instance) and Azure SQL Database for all demonstrations.

You can refer to the SQL Azure ctegory for deploying Azure resources.

As stated earlier, the requirement is to migrate encrypted data from the On-prem SQL instance to Azure DB. Therefore, In this section, we will do column-level encryption for the on-premise SQL database. These scripts uses a sample database [DemoDatabase] and table [userData].

The [UserData] table has a column [AccountNumber] that we want to encrypt. We have an additional column [EncryptedText] with VARBINARY(MAX) data type to store the encrypted text.

Execute the following script to create a sample database and [UserData] table with a few records in it.

You need to specify a complex password in the following script.

Once we have a symmetric key, we can encrypt column values using the following steps.

As shown below, we have encrypted account numbers in the [EncryptedText] column.

You can decrypt column values using the DECRYPTKEY() function in the same connection after opening the symmetric key, as shown below.

In the command prompt, run the following BCP script. This script runs the select statement on the specified server (here WIN-CDKN1T5F5EG) and saves BCP data in C:\Temp\EncryptedData.BCP

As shown below, it copied 3 data rows in the BCP output file.

Before importing data to Azure, we require a table with relevant columns. Here, we create an SQL table [UserData] with two columns. We are not transferring data from the column [AccountNumber] because it is already stored in an encrypted form in another column.

Run another BCP script that pulls data from the BCP output file and imports it into the Azure SQL table. In the BCP script, you need to specify the SQL user name in the form of user@azureservername.

Once data import is done, run the select statement to verify that the encrypted data exists.

We have imported encrypted data in step 5. However, this data is not helpful until we can decrypt it successfully on Azure SQL Database.

Therefore, run the following BACKUP CERTIFICATE script and backup the existing certificate we created earlier. We specified a password as well in the script that we will require later as well.

It creates a certificate and private key file, as shown below:

We have taken certificate backup from the on-premises SQL Server. However, we cannot copy it to Azure because Azure SQL does not access the file system. Therefore, we will use CREATE CERTIFICATE … FROM BINARY for importing certificates in Azure.

For this purpose, we need to extract the binaries from the backup certificates.

We will require the output of the script ( column- BulkColumn) in Step 9.

Connect to Azure SQL and create a master key with a similar password as of Step 2.

In the CREATE CERTIFICATE FROM BINARY,

Step 10: Create a symmetric key from the certificate

In this step, you can create the symmetric key decrypted by the certificate created in Step 9.

Step 11: Open the symmetric key and verify the decrypted data

To decrypt data, first, open the symmetric key and use DECRYPTBYKEY() function as shown below.

You can see decrypted data in the column [NameAsDecryptedText].

This article explored moving encrypted data from an on-premises SQL Server to an Azure SQL Server. We cannot copy a certificate to the Azure SQL Database directory. Therefore, we used CREATE CERTIFICATE FROM BINARY method. This way, you can have encrypted data into Azure for safeguarding against malicious activities.