Imagine the following scenario. Someone has an unauthorized access to your database system environment. That person finds a way to get the last database backup file, copies it and takes it in an unsecured environment. In this moment, the security mechanism just fell apart.

This scenario illustrates what can happen when someone illegally copies, detaches, and restores your database. The consequences for such activity can be substantial, depending on the sensitivity of your data environment.

TDE performs real-time I/O encryption and decryption of the database files (data and log). The encryption uses a Database Encryption Key (DEK) which is stored in the database boot record for availability during recovery. Backup of databases that have implemented TDE are also encrypted by using the DEK. 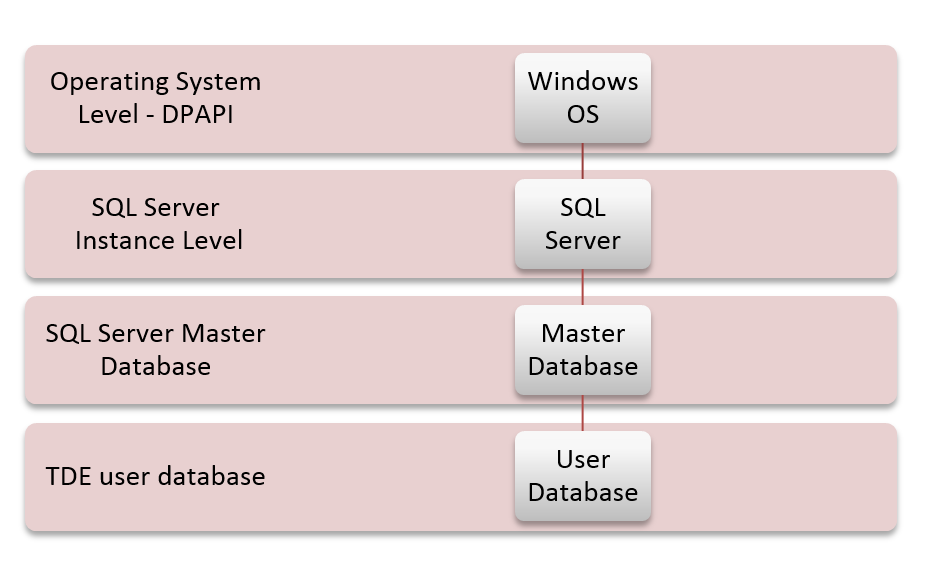 To implement TDE, we need to follow these steps:

Key point of TDE is that an entire database is encrypted on the fly. Data in an encrypted database are encrypted before they are written to a disk and decrypted when read into memory. In this case you should pay attention on the performance issue on heavily transaction load system.

In some case scenarios you only want to encrypt backup files to protect data “at the rest”. SQL Server 2014 have one new crypto feature and that is encrypted backup. In a nutshell almost same implementation like TDE, but major difference that database is not on the crypto “pressure” during regular transaction processes. The idea is that you have a business need to keep your backup secured. In this case there is no performance issues because the only encryption/decryption is during the backup/restore operation.

Or you can do it through SSMS GUI: 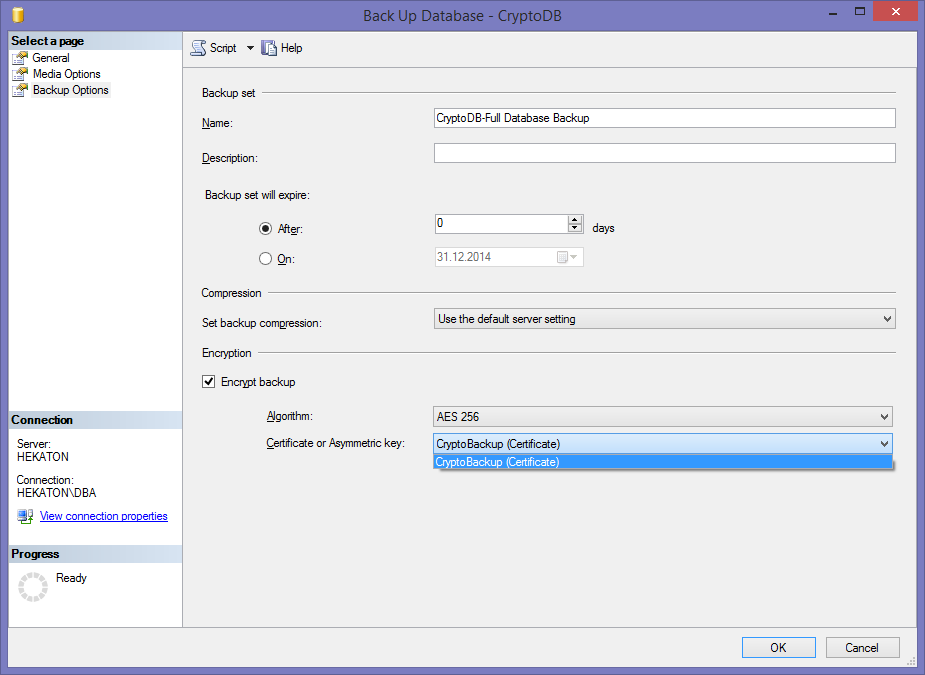 Before you can access the Encrypted backup option on this dialog window, you need to check (under the Medio Options tab) this option:

When a symmetric key is created, it must be encrypted by using at least one of the following:

Example of creating a symmetric key encrypted by certificate:

In this exercise, you will pass all necessary steps for implementing symmetric encryption in a user-created sample database. Also, you will encrypt data in a user table.

Asymmetric key pair is made up of a private key and a public key. Each key can decrypt data encrypted by the other key pair. Asymmetric encryption/decryption are relatively resource-intensive, but they provide a higher level of security than the symmetric encryption.

Sometimes business requirements will demand to hide some data without using encryption/decryption. There are plenty of mechanisms to make some data/information unreadable. Hashing is one of those mechanisms. Hash functions are powerful, fast and efficient ways to hide data and to check data integrity.

A cryptographic hash function is a function that implements an algorithm that takes some data and returns a fixed-size bit string.

The hash function has the following main properties:

In next example we will just add an extra space after name:

As you see, hash output is totally different

Hashing and encryption are not the same function and each have a totally different usage in practice. The basic point to remember is that hashing is used when there is no need to make a reversible operation, whereas encryption is used when you need to decrypt data at some later point in time.

As you have seen so far, protecting data is the most important thing in database environments. When all security elements fail (i.e. installation errors, authentication, authorization, bad access policy, etc.), there is no more protection. This two articles taught you how to implement advanced techniques for protecting data such as cryptography.

He is active in the area of databases and information security. He has an academic degree Ph.D. in the field of modeling, design and development an environment for the preservation of privacy beyond traditional SQL limitations. Jasmin regularly publishes research papers in indexed databases as include are: IEEE, Inspec, EI Compendex and ACM.

View all posts by Jasmin Azemovic