The first step in demonstrating any Power BI feature is to load the dataset into the Power BI environment and build the required visuals. For this article, I’m going to use the famous AdventureWorksDW database, as provided by Microsoft. You can download this database and get it installed on your PC.

Open Power BI Desktop and click on Get Data. Select SQL Server from the drop-down menu. 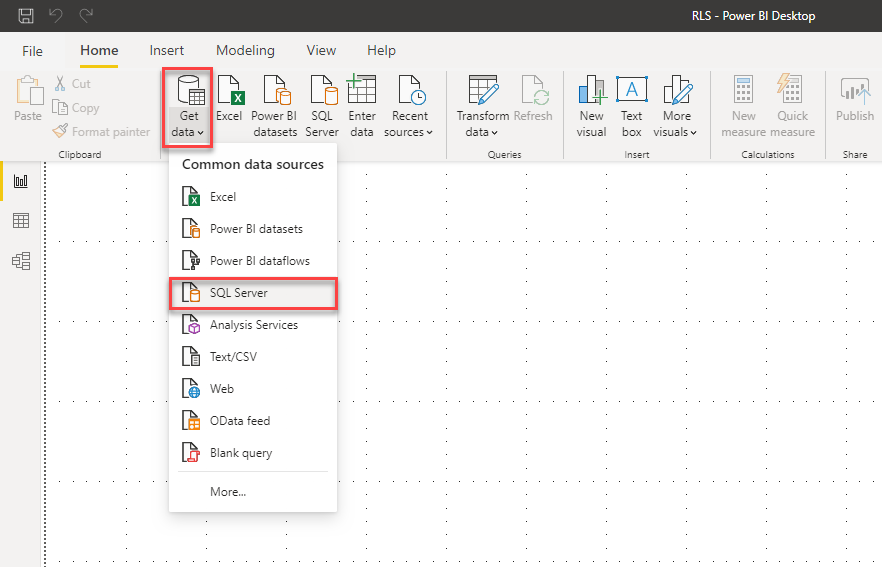 Figure 1 – Get Data in Power BI 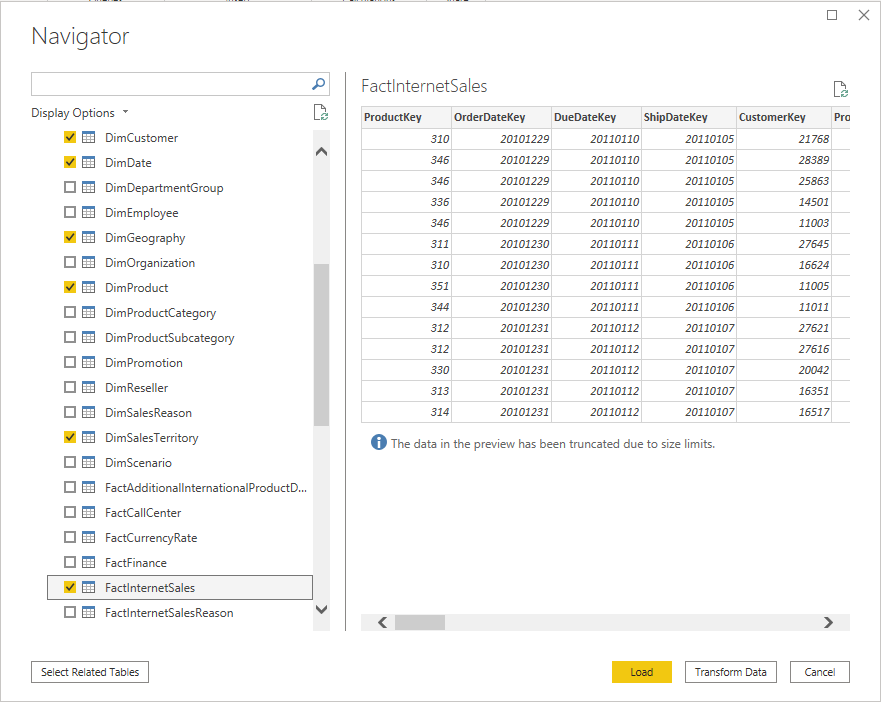 Once these tables are imported into Power BI, you can view these on the right-hand pane as follows. 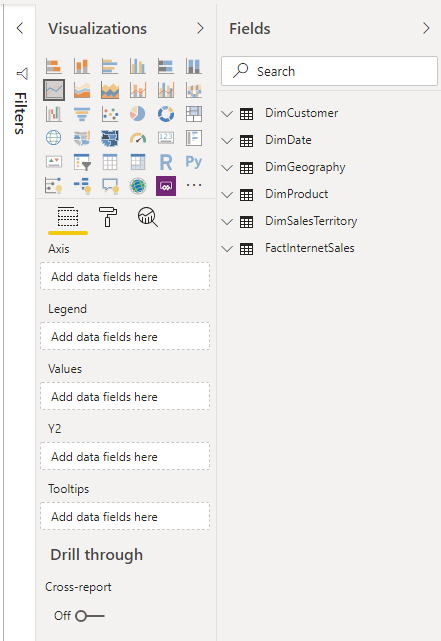 Alternatively, you can also view the Data Model and the underlying relationships. 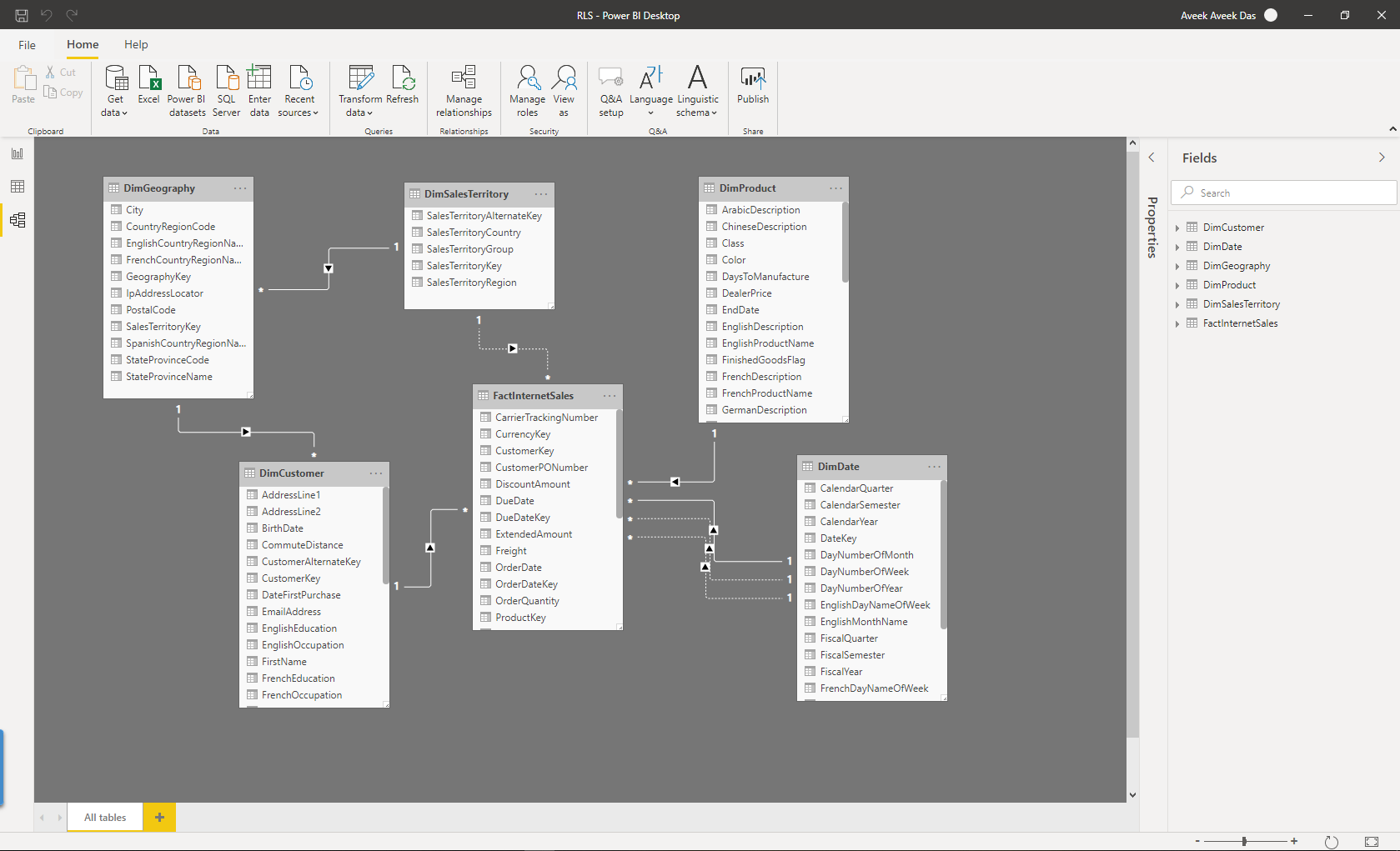 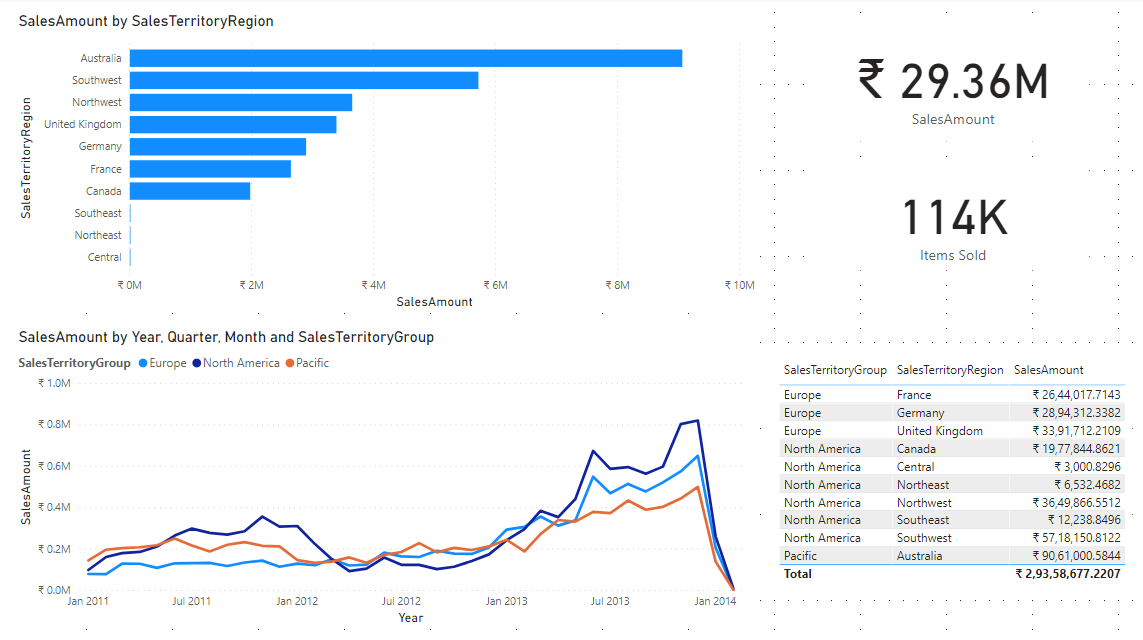 In order to implement row-level security in Power BI, navigate to the Modeling tab on the top, and select Manage roles.

In the Manage roles dialog box that appears, click on Create. 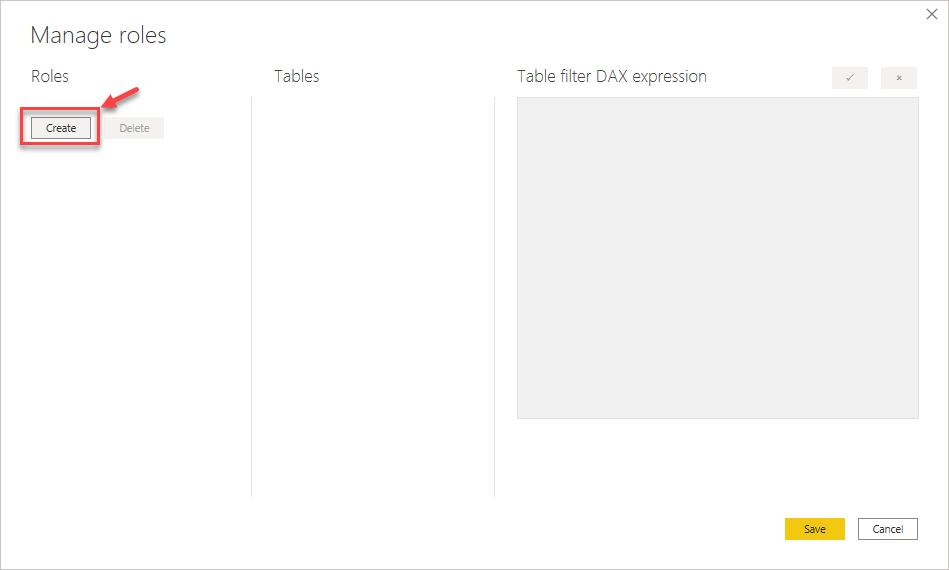 Once you click on Create, you’ll have a list of tables from the data model from which you can select a filter to apply the row-level security. Since I’m going to filter on the territory group, I’ll expand the DimSalesTerritory and select Add Filter and then select the column SalesTerritoryGroup. 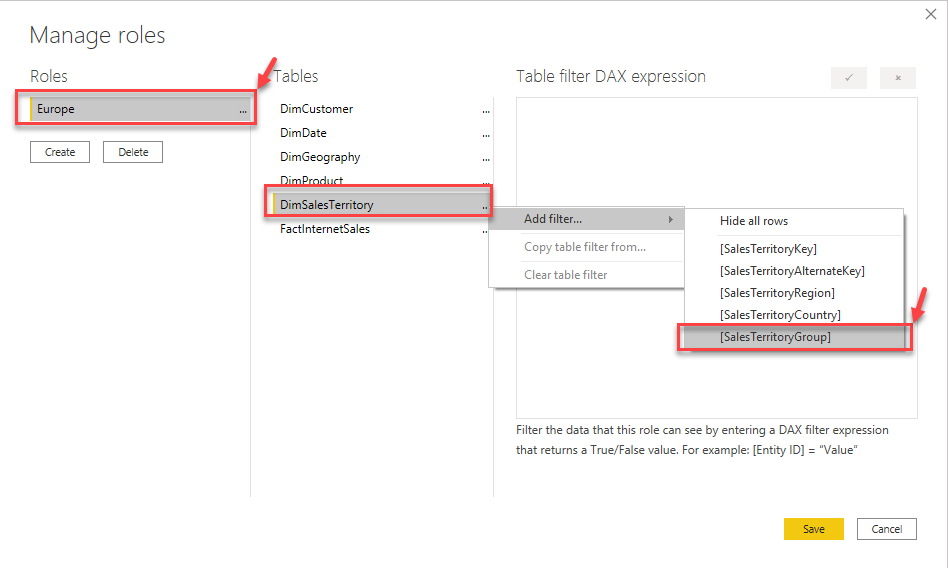 You’ll see that a new sample DAX expression has been added with SalesTerritoryGroup as the table. 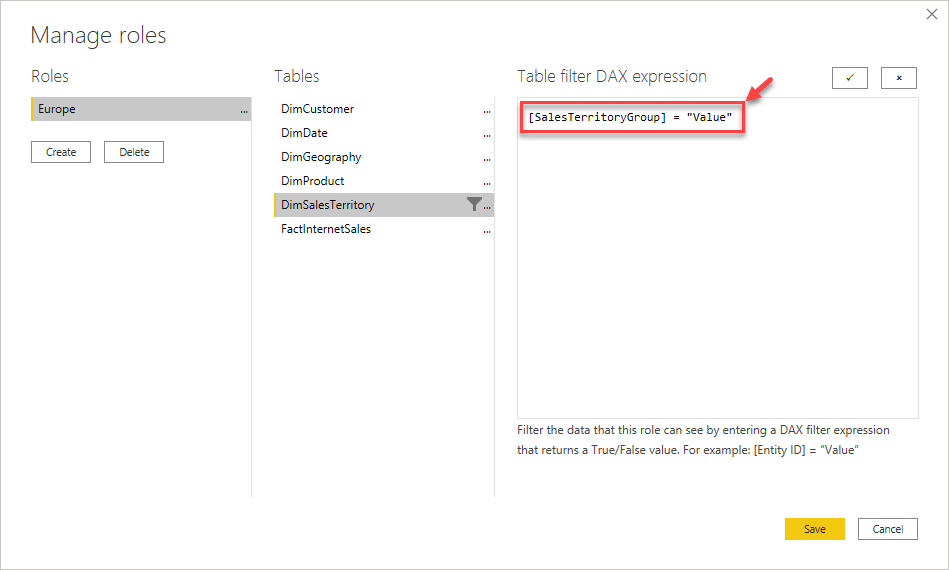 Replace the “value” in the DAX expression with an actual value from the SalesTerritoryGroup. Let’s add the value as “Europe” and such that this role will filter data only for those records for Europe as the territory group. 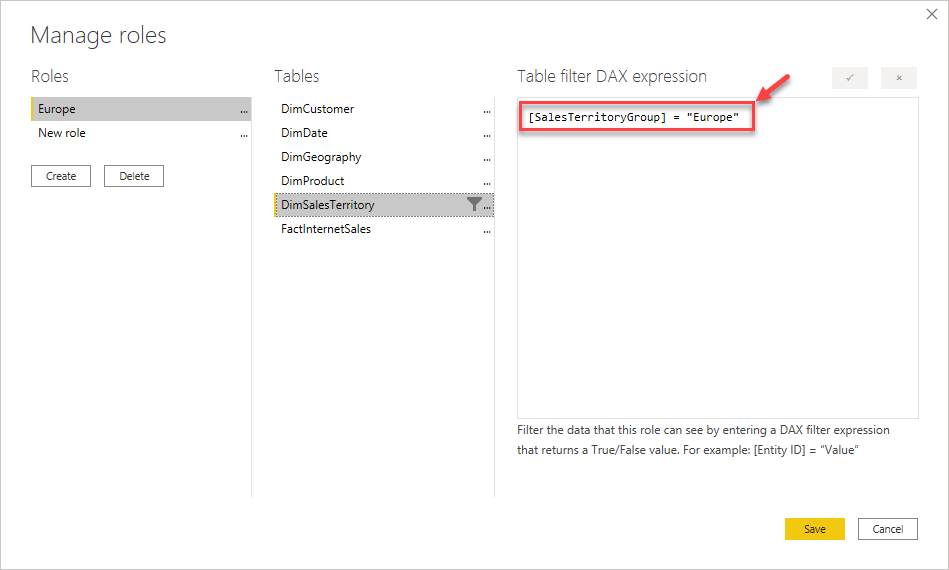 Likewise, let’s create one more for “North America” as well. 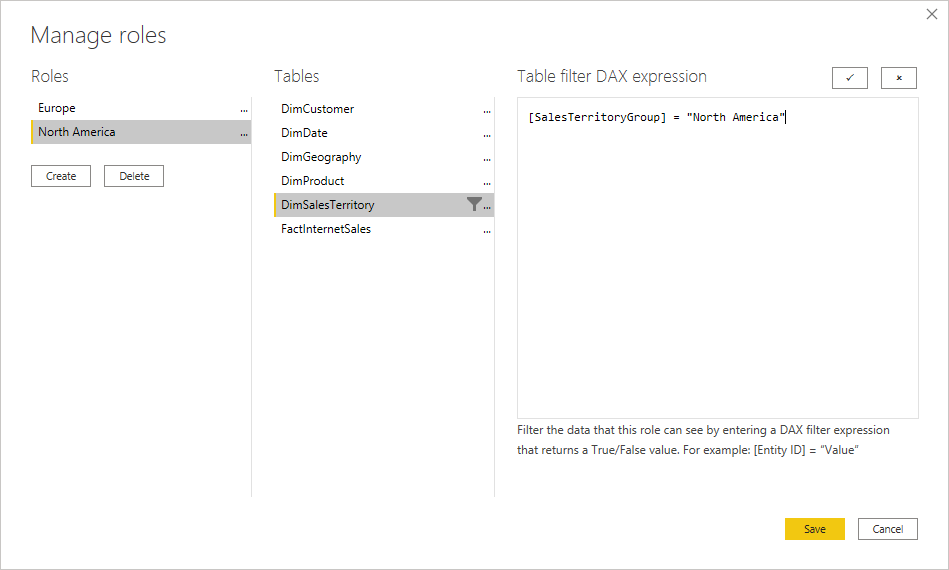 Finally, let’s create a role for a manager who wants to monitor sales across Europe and North America. We need to provide access to both these territories for the manager. You can use the following expression to assign more than one value for a role. 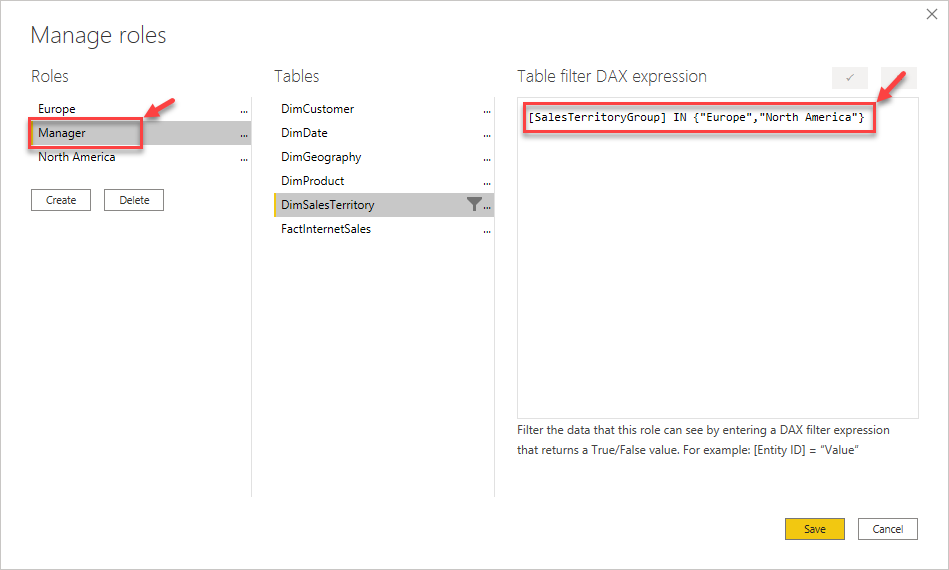 Now that we have created the roles let us go ahead and view the implementation in actual. There is an option in Power BI, where we can see the reports from the context of the roles that we just created. This will help us test if the DAX filter expressions are working as expected, and if the row-level security in Power BI can be implemented correctly.

Click on View as, by default, the role None will be selected. 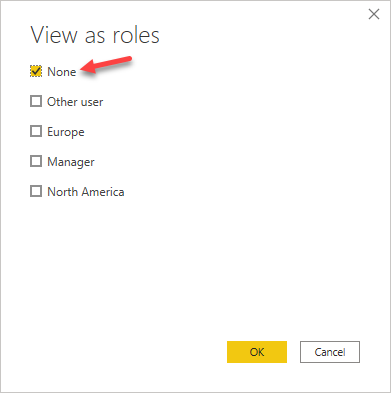 Let us try to see how the reports look if we select a different role. Select Europe as the role and proceed ahead. 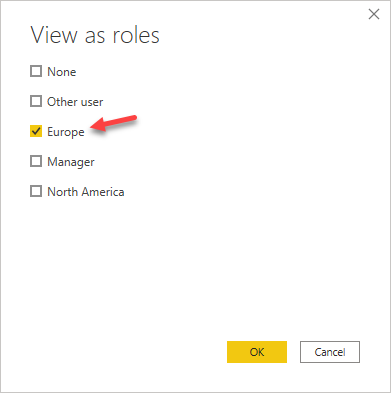 Figure 15 – Selecting Europe as the role

You’ll notice that the report renders the visualization, but only for the specific role that is selected. You can also notice on the left-hand top that it is mentioned as “Now viewing report as Europe”. Notice how the regions only for Europe are filtered and the line chart now shows only one line, that is for Europe only. 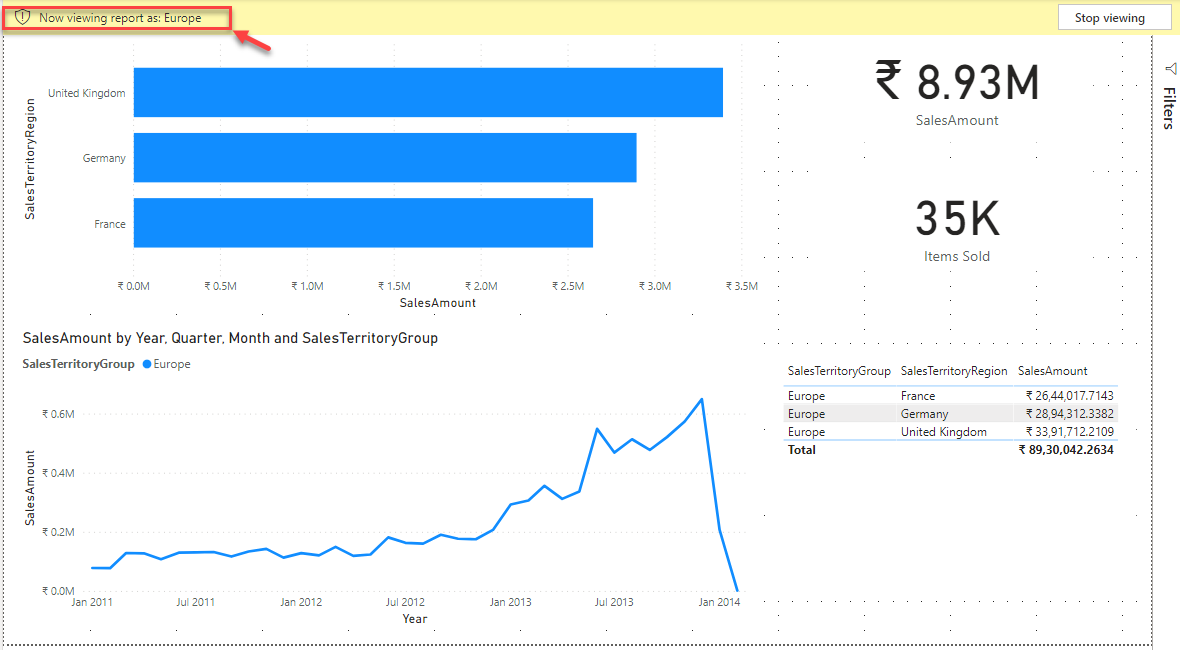 Let us repeat the same again but by changing the role and selecting North America. 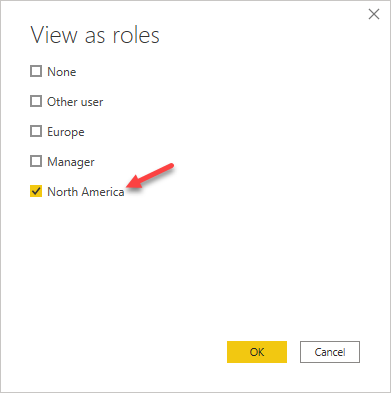 As you can see now, all the territories that belong to North America as being displayed along with a single line for the same in the line chart. 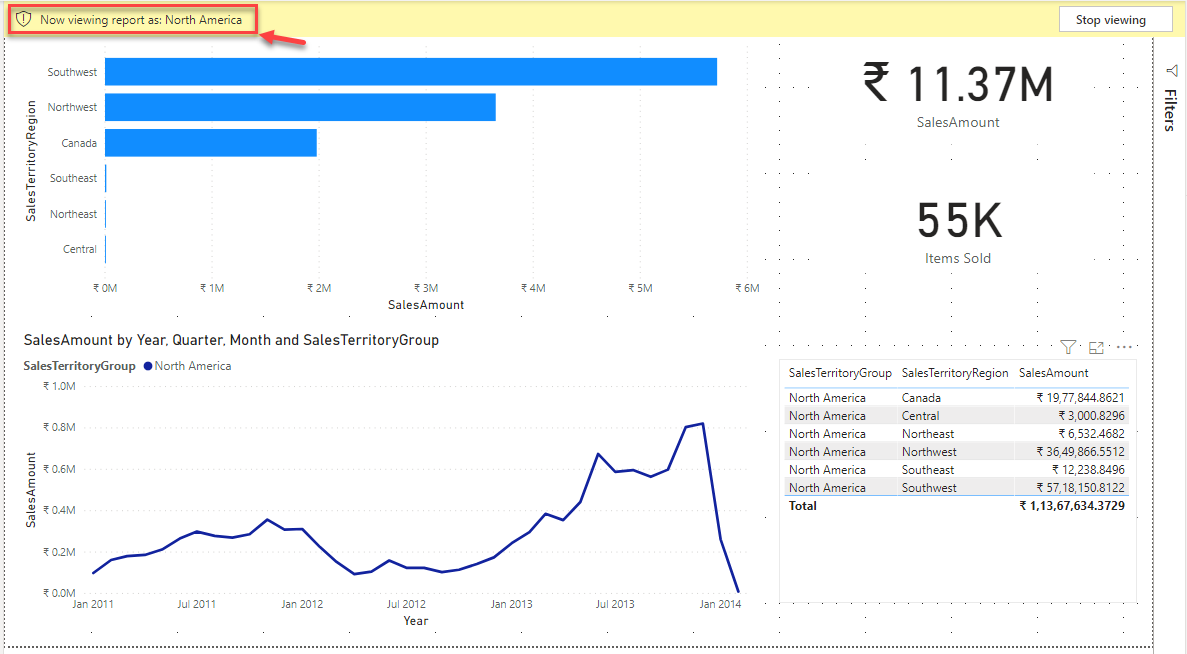 Finally, let us see how the manager role will display the results, as this role needs to display both the groups – Europe and North America. Select the Manager as the role and click OK. 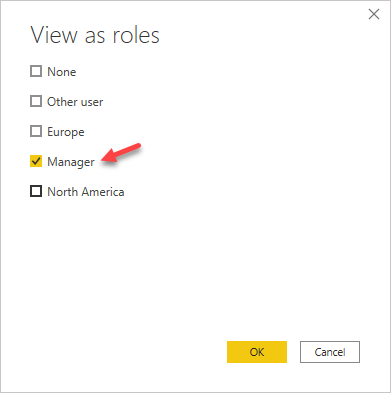 Figure 19 – Selecting Manager as the role 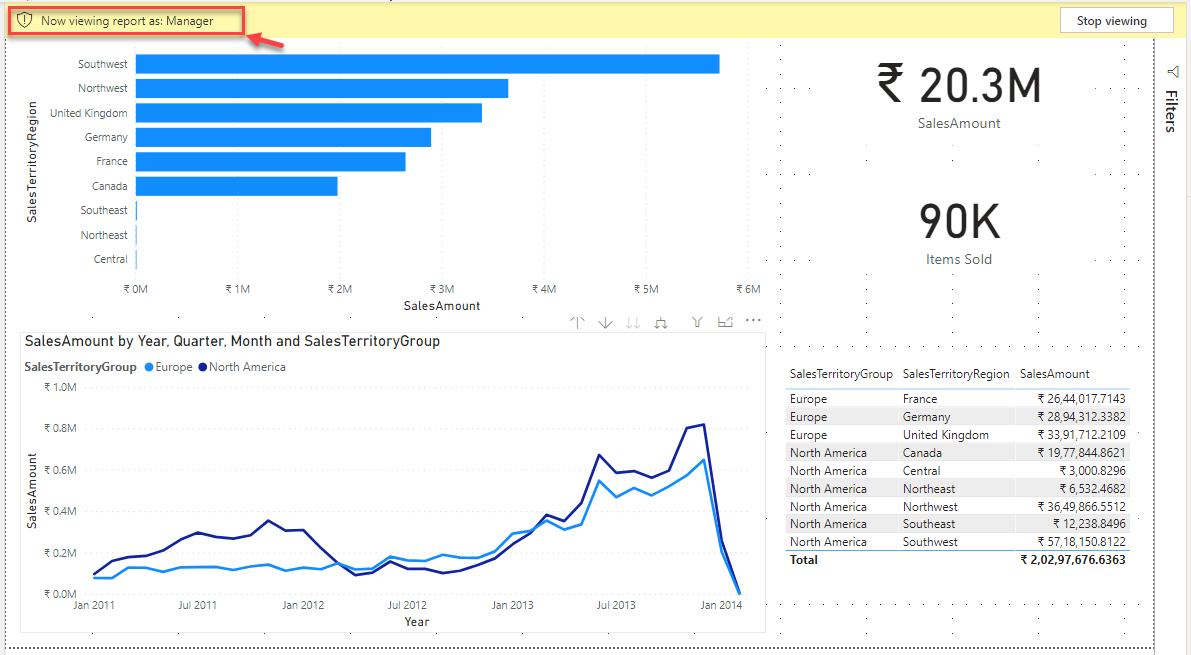 Publish the report to a workspace and open the published report link.

Open the report that you have just published. 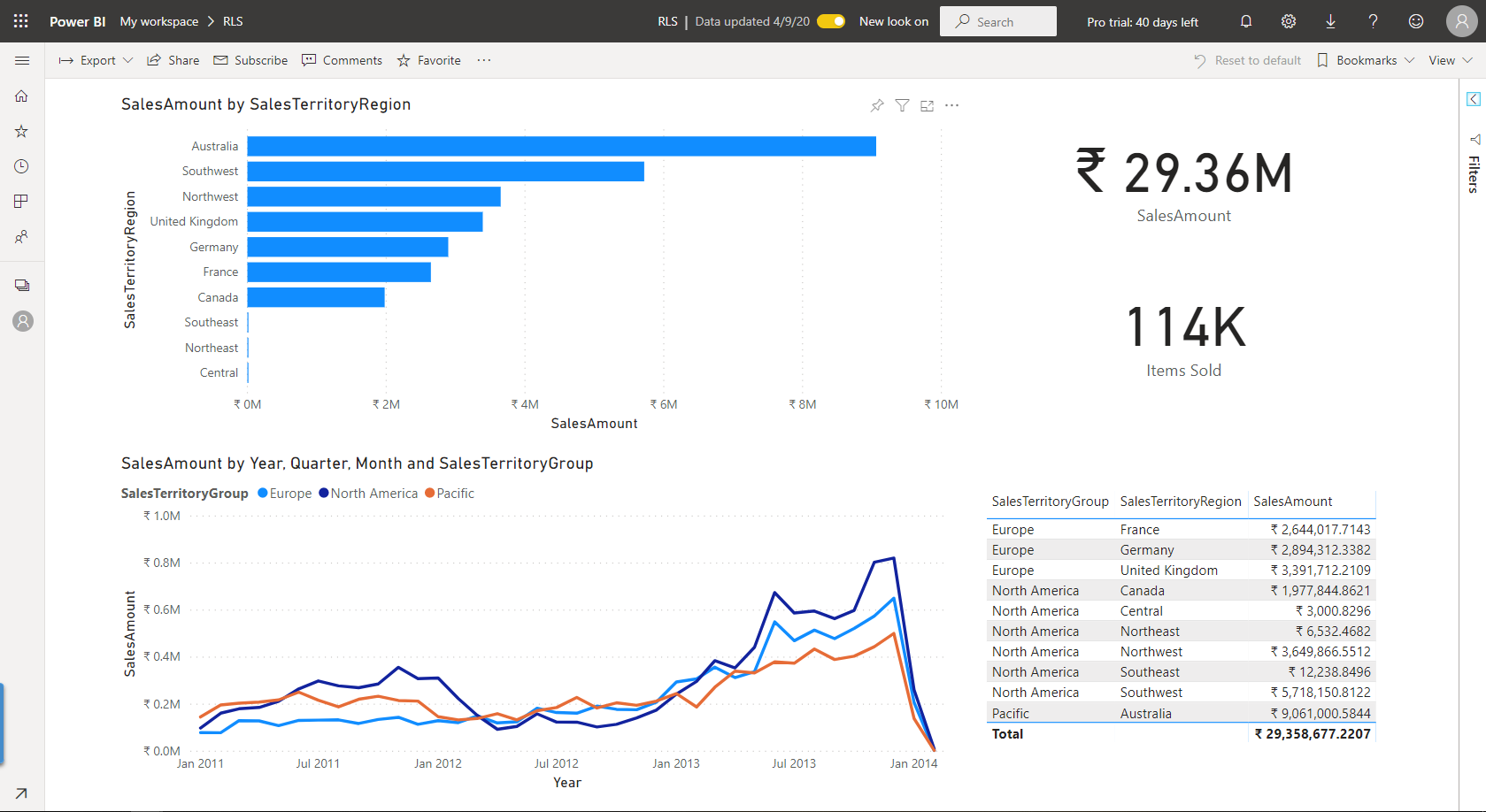 Next, in order to implement RLS, navigate to Datasets, and then click on the options button for the report dataset that you just published.

Select Security from the drop-down menu.

The Row-Level Security page opens, and you can see all the three roles that we defined in the desktop are present. Let’s add some users to these roles and try to view from each of the role contexts. Select Europe and the email address for the user who can view the territory for Europe only. Repeat the same for North America and Manager as well. Since I’m the only user in my directory, I’ll be adding my email address for all these roles; however, you can add as many as required based on the requirements.

Now that we have added users let’s test the roles as well. Right-click on the options for a role and select Test as Role.

As you can see, the Power BI report is rendered with data only for North America. 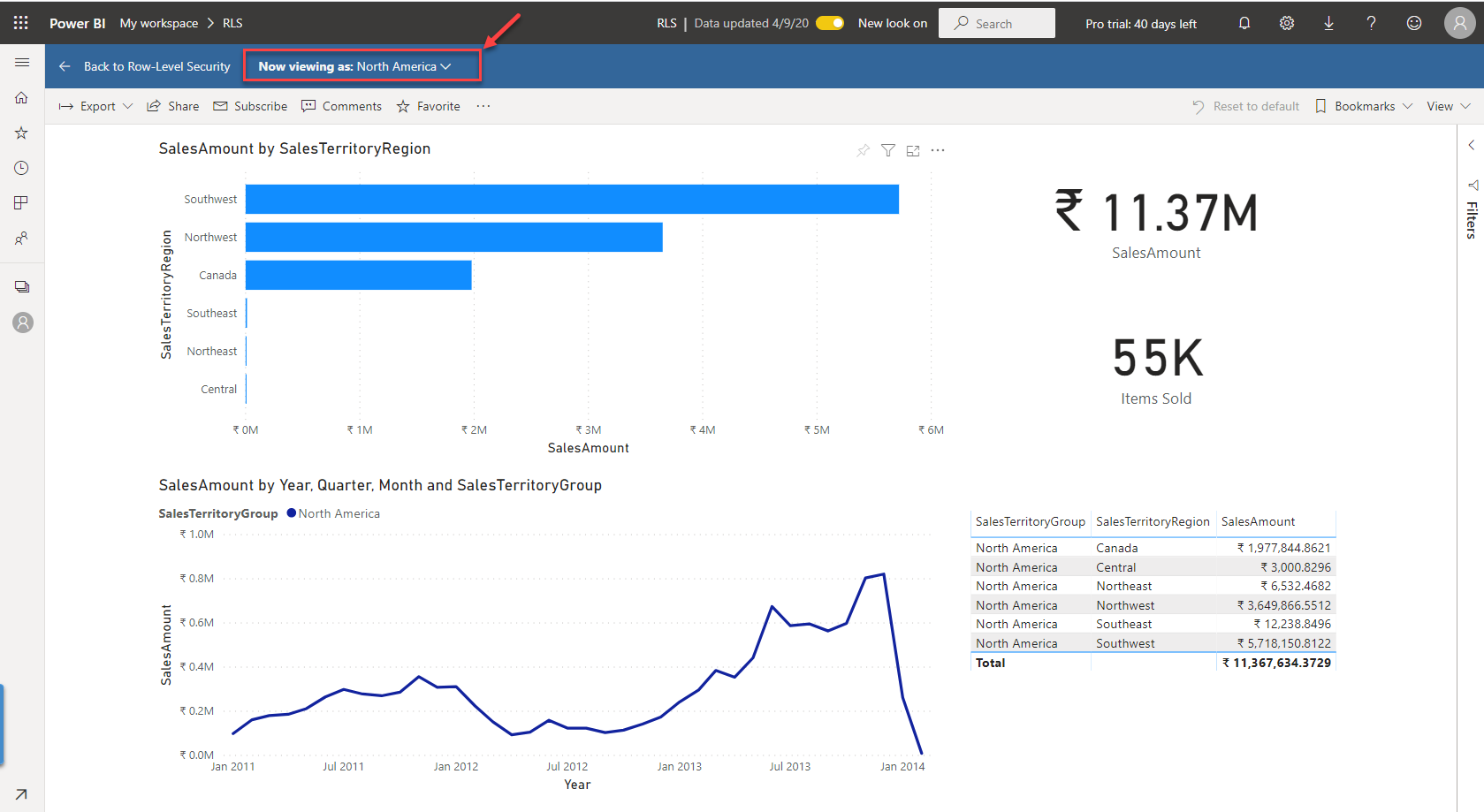 Repeating the same as with the Manager role.

As we have learned, row-level security in Power BI is one of the most important security features in both the desktop and the cloud service. In addition to the email addresses that we mapped the users to, users from the Azure Active Directory can also be mapped to the roles and given secured access to the reports. However, an important thing to note that any user who has privileges to modify the report and the dataset will be able to view the underlying data for other roles as well.