In this article, I am going to explain how to add users to a Power BI workspace using Power BI PowerShell. As you already know, Power BI is a business intelligence tool from Microsoft, using which we can build graphical reports and dashboards which bring some sense to our data that resides on the database. Power BI also has a web interface known as the Power BI service, which can be used to share and collaborate these reports and dashboards with multiple users within or out of the organization.

With the addition of the new workspace in Power BI Service, customers are now able to define more granular control over their individual workspaces. We can now add multiple users to our workspaces and define role-based access for each of those users. The new workspace in Power BI Service also allows administrators to assign roles to user groups, security groups, distribution lists, etc. in addition to the individuals.

In order to add users to Power BI workspace, we will need to understand various roles that we can assign to a user while creating using Power Shell. There are four primary roles that are currently available to use with the new Power BI workspace and these are as follows.

Now that we have some idea about the roles in Power BI service, let’s go ahead and try to assign these roles to the users. In this tutorial, I am going to use Power Shell to connect to the Power BI service account and then run commands to add the users. In my previous article, regarding Programmatic Access to Power BI PowerShell commandlets, I have explained how to use the Power Shell commandlets to work with the Power BI module. I would strongly advise having a look at it before continuing this article, to have some fair knowledge about working with PowerShell commandlets with Power BI.

Now, to add users to Power BI workspace, we would need to connect to the Power BI service account first. We will open the Power Shell ISE and run the following command. 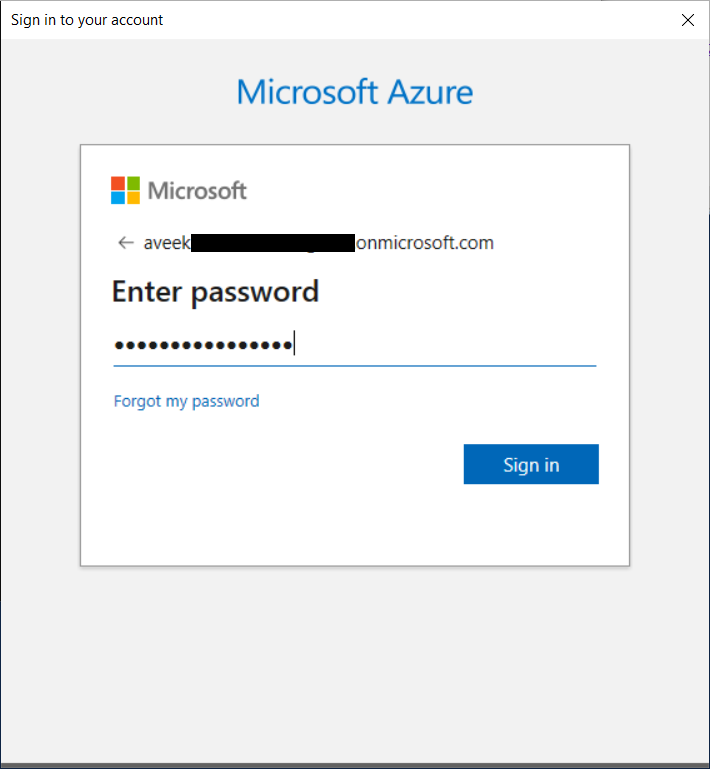 Once you log in to the service account successfully, you will receive a response in the Power Shell terminal as follows.

Once you are logged in to the Power BI service account using Power Shell, the next step is to run the command that will add users to the workspace. But before moving forward, let us first log in to the Power BI service using the web portal to verify the current scenario. Navigate to https://app.powerbi.com and sign in with the same credentials as used to connect the Power Shell terminal.

As you can see, I have an additional workspace configured with the name “Staging Workspace”. Although this is an empty workspace, we can still use it to add users to this workspace.

In order to view the current users in the workspace, expand the Workspaces, and select the three dots beside the workspace of your choice, in this case, it is “Staging Workspace”. From the drop-down that appears, select Workspace access. 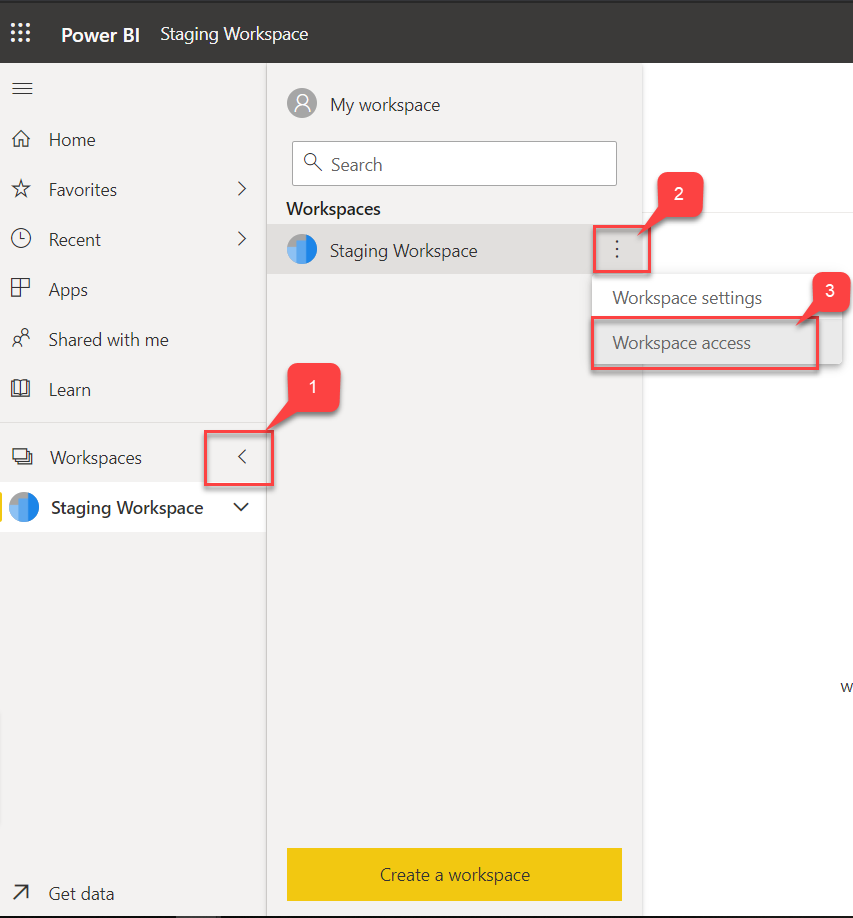 As soon as you click on Workspace access, on the right-hand pane, a window appears which displays a list of users that are currently allocated to use this workspace and their respective roles. 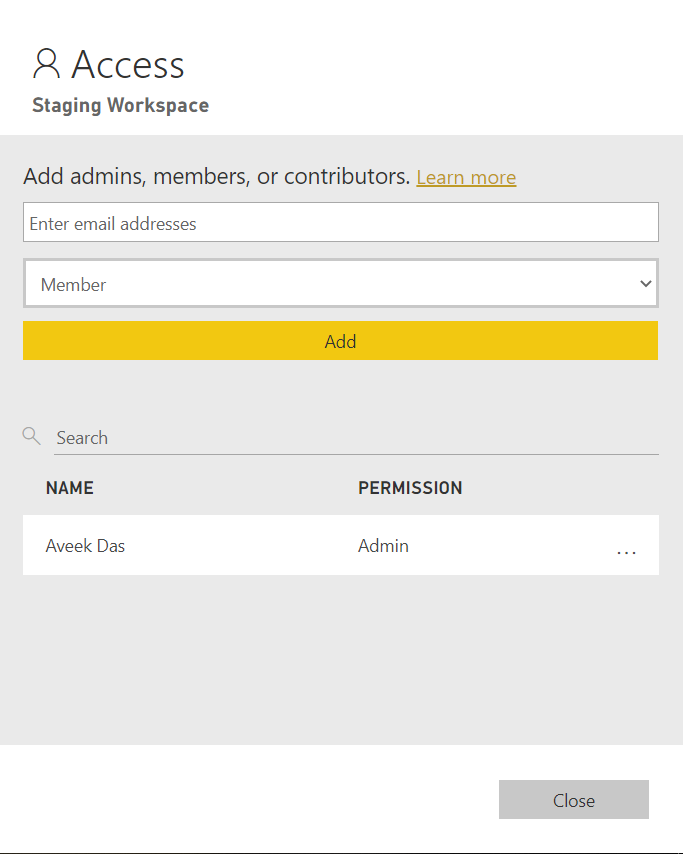 As you can see, there is only one user at the moment, with the admin role. One last step before proceeding to add users to Power BI workspace is to get the WorkspaceID. This can be copied from the browser address bar as follows.

Let us now go ahead and add a second user to this workspace using Power Shell as a contributor role. The command to add the user is as follows.

Once you type the above Power Shell command and hit enter, it will add the new user with a contributor role to the workspace.

You can verify the same by navigating to the web portal and follow the same steps as mentioned above. As you might have already guessed, the new user has been added with the contributor role. 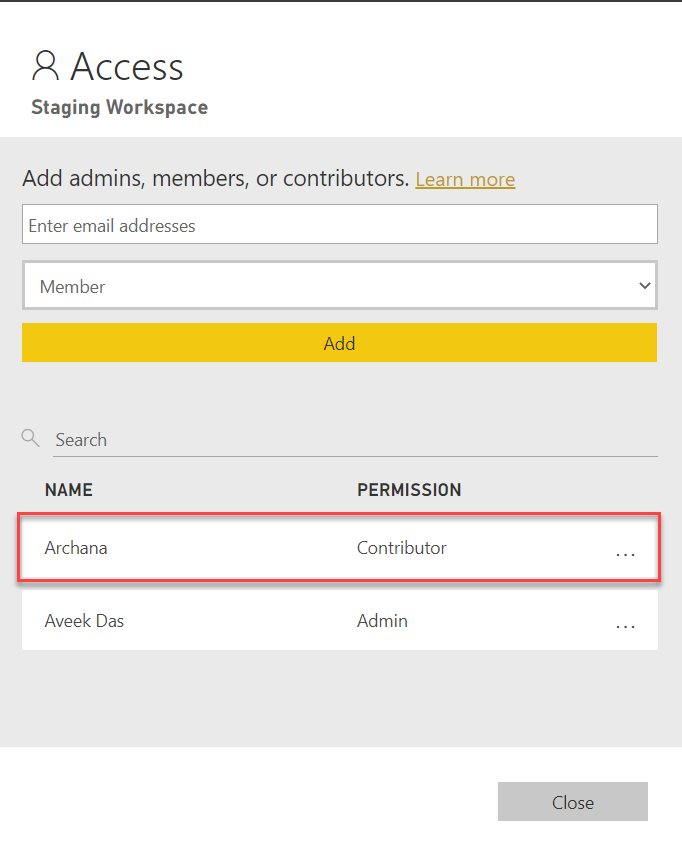 Modifying the roles of users in the workspace

Suppose you have already added a new user to a workspace or there is an old user in the workspace, for whom the role needs to be modified. In such a case, you can run the above command again. The only change that needs to be done is to modify the name of the role at the end of the command. Let us now try and modify the role of the new user that we just added. The command will be as follows.

Let us again head over to the portal to verify the same. 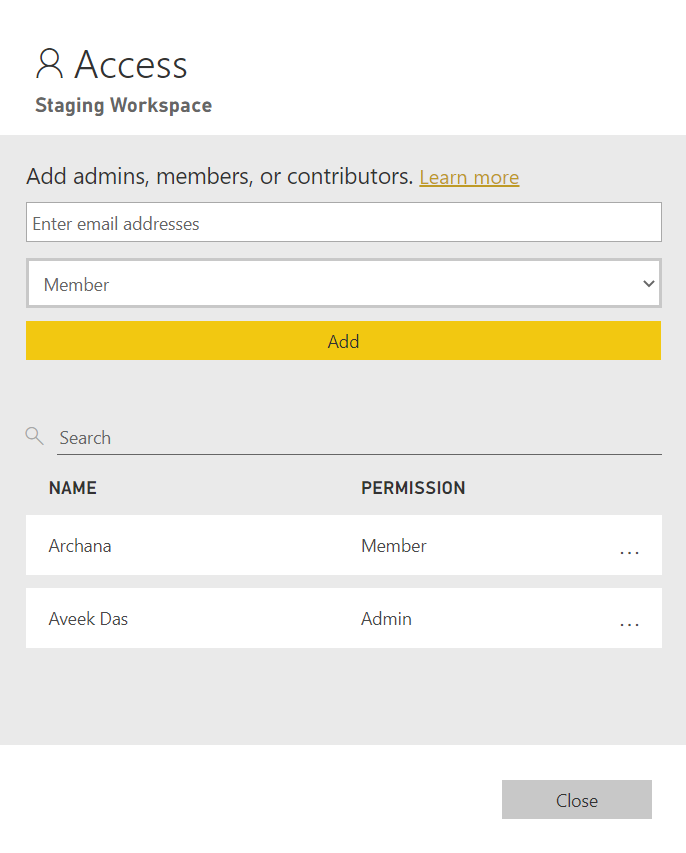 As you can see, the role has been updated as Member from a contributor.