This article explores the SQL Table variables and their usage using different examples.

We use many intermediate tables to perform data manipulation, computation, and data sorting from multiple sources. It is beneficial to use temporary tables instead of a regular table and drop them later. Usually, we define SQL temporary tables using the # symbol:

In this article, we will look at an alternative way of storing temporary data, i.e. SQL table variables. Let’s take an overview of it along with multiple examples.

In the above query, we specified a table variable using the DECLARE and TABLE keyword. The table variable name must start with the @ symbol. We also define table columns, data types, constraint similar to a regular table.

Insert data into a table variable

We can insert data into a table variable similar to a regular table:

You can retrieve a record from a table variable using the Select statement:

We cannot drop the table variable using the DROP Table statement. If you try to drop it, you get incorrect syntax message: 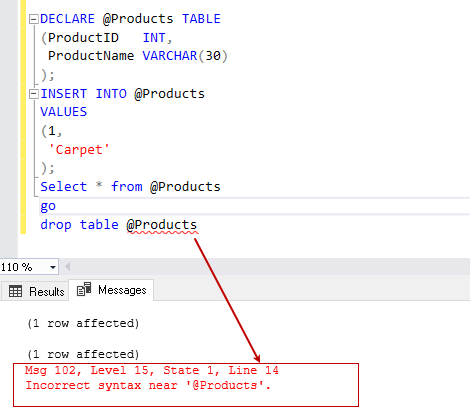 Let’s think of a few questions:

Most people are confused about the table variable location and think that it is stored in memory. Let’s check it out.

We can use sys.tables for listing tables in the tempdb database. Let’s execute the following query and do the following:

In the output, we did not get any existing table before and after declaring a table variable:

Does it mean that the table variable is not stored in the tempdb database? No, it is not valid. You can note that we use Go statement after each step to finish the batch before starting the subsequent batch. Table variable scope finishes at the end of the batch, and SQL Server automatically drops it.

Let’s run the following query. In the modified query, we removed the Go statement after declaring a table variable and checking the existence of it in the tempdb:

Now, in the output, it shows the table variable in the tempdb database:

We cannot use the table variable in the explicit transaction, it does not return any error message, but it skips the transaction.

In the following query, we execute the query in four steps:

In the output, we can verify that ROLLBACK TRAN did not perform a rollback of data from the table variable:

We can define and use table variables in the user-defined functions as well. Execute the following query:

Later, we can use a UDF function to retrieve the records:

It retrieves the records from UDF:

Table variables are a particular type of data types. We can use these table variables similar to the user table to hold temporary data.

Q: Is it possible to add indexes on the table variables?

A: No, we cannot define indexes on the table variables.

Q: If we cannot define indexes on table variables, do we have any alternatives for it?

We cannot define an explicit clustered and non-clustered index on the table variable. Primary key and unique key constraints automatically create the internal indexes on it. You can use these constraints to unique define rows in an index as well.

Can we modify a SQL table variable structure after declaration?

A: No, we cannot alter a table variable definition after the declaration. Suppose you define a table variable for holding the Varchar data type of length 50. Later, our requirement changes, and we want to modify it for length 100.

In this article, we explored the SQL table variables and their usage for storing temporary data. We also compared it with the temporary tables. Let’s have a quick summary of what we have learned: